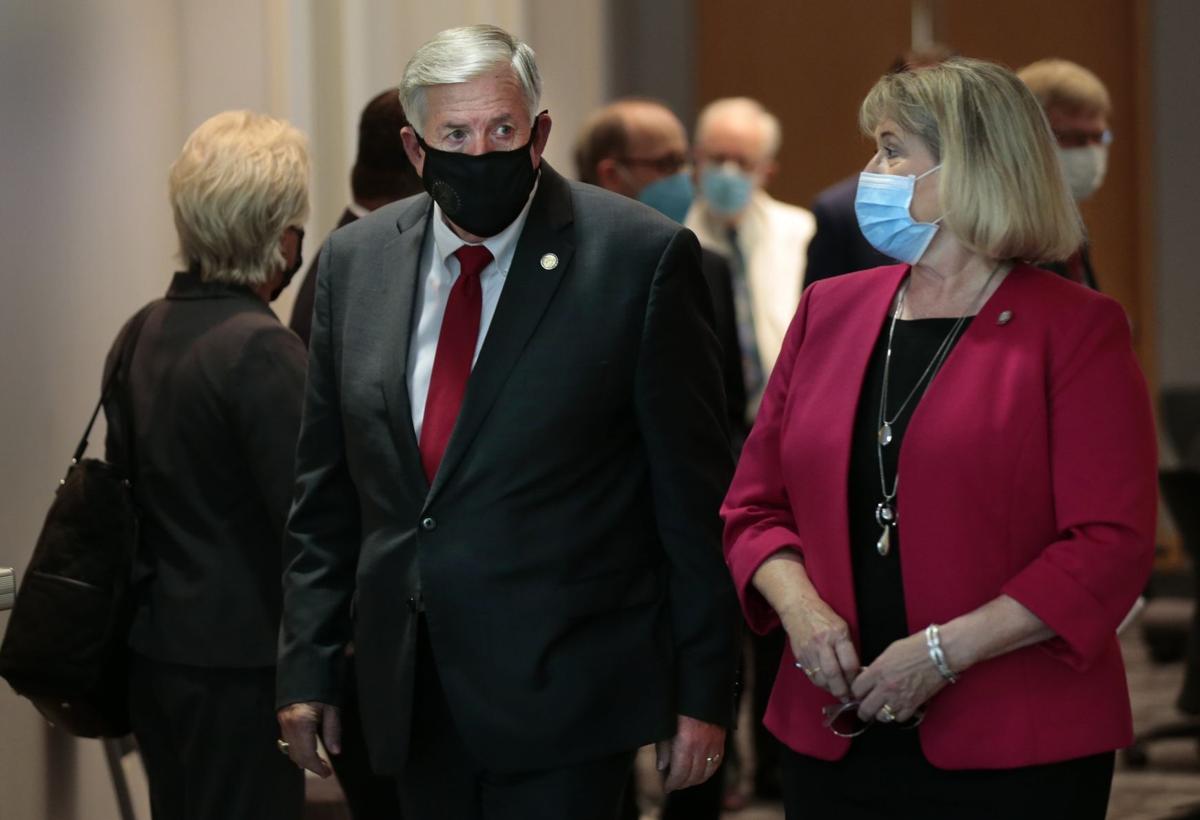 Missouri Gov. Mike Parson and his wife, Teresa, leave a meeting with representatives from the Washington University School of Medicine where they learned about a new saliva test for coronavirus recently approved by the FDA on Thursday, Sept. 3, 2020. (Robert Cohen, rcohen@post-dispatch.com) 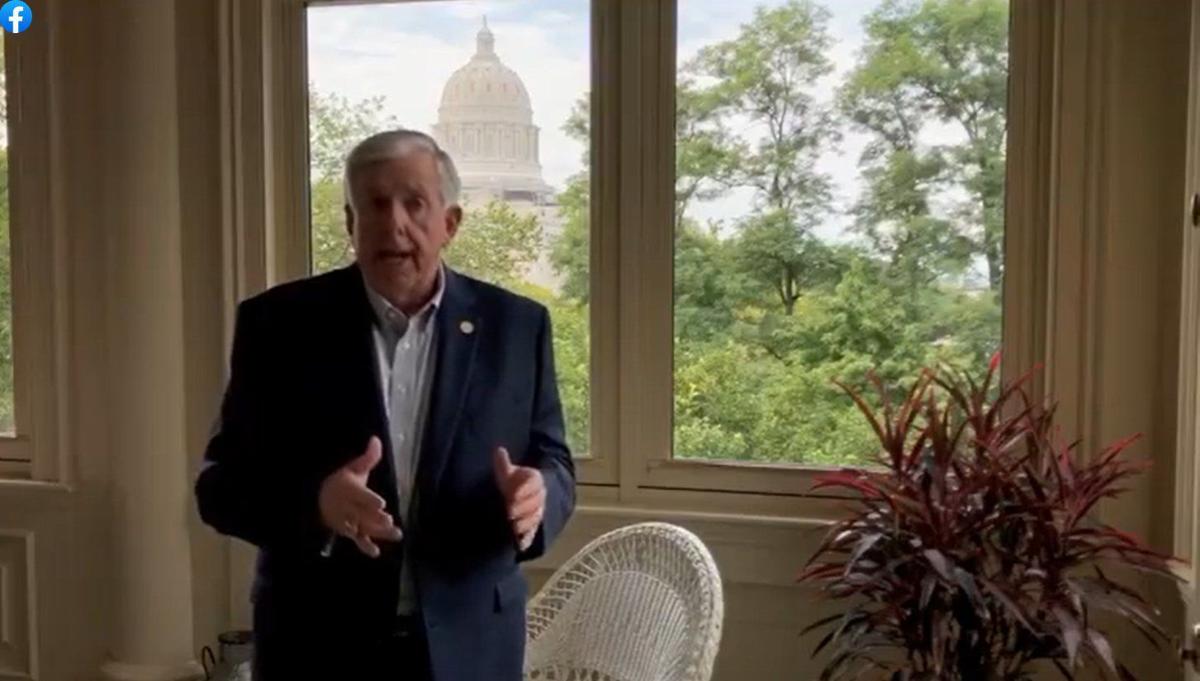 Gov. Mike Parson announced Wednesday, Sept. 23, 2020, that he and his wife, Teresa, have tested positive for COVID-19. (Screenshot from Parson's Facebook site)

JEFFERSON CITY — Gov. Mike Parson said Wednesday he and his wife, Teresa, have tested positive for the coronavirus, prompting both to isolate from the public and postpone several events, including a ceremonial bill signing in St. Louis and a widely anticipated debate with Democratic challenger Nicole Galloway.

In a brief recorded statement, Parson said his wife was tested Wednesday morning after experiencing mild, coldlike symptoms; he then was tested despite not having any symptoms. A second test confirmed the first lady’s diagnosis; the governor said he was awaiting the results of a second test.

“Myself and the first lady are both fine,” Parson said. “I was tested. Those results, the preliminary results, has come back as a positive test. . . . Right now, I feel fine — no symptoms of any kind.”

Dr. Randall Williams, director of the Department of Health and Senior Services, said the governor is currently isolated at the Governor’s Mansion, and is expected to be for 10 days. Contact tracing is underway to identify individuals who have been in close contact with the Parsons, he said.

“During this time, Governor Parson continues to conduct and fulfill all roles of businesses of the state of Missouri from the Governor’s Mansion without interruption,” an administration statement noted.

Earlier Wednesday, Jones said the first lady received a positive result after taking a rapid test in the morning and was awaiting results of a nasal swab test to confirm the findings.

The first lady had been showing signs of the disease, including a cough and nasal congestion when she took the test.

She left the capital city Wednesday to isolate at the couple’s home in Bolivar.

The fast-moving news came on a day when the state reported 1,580 additional people had tested positive for COVID-19, bringing the total number of cases to just under 117,000. The DHSS also announced 83 more deaths, bringing the total to 1,947. The state said a delay in death certificate data was a reason for the record single-day death toll.

The governor had been set to travel to St. Louis for a ceremonial bill signing event, marking passage of a new law temporarily repealing residency requirements for city police and other first responders. Parson also was due to make a campaign stop in St. Charles on Thursday and square off against Galloway, his Democratic challenger, in Columbia on Friday.

Mark Maasen, executive director of the Missouri Press Association, which had organized the debate, said Parson campaign manager Steele Shippy told him it would have to be rescheduled because of a quarantine recommendation.

“Plans are to schedule at a later date,” Maasen said.

“This is a stark reminder that this virus can reach anyone, anywhere and that this pandemic is far from over,” Galloway said.

Teresa Parson often accompanies her husband to events as he travels the state. His schedule has been particularly busy as he ramps up appearances heading toward the Nov. 3 election.

St. Louis Sheriff Vernon Betts said he and two top aides met Friday with Parson, Parson’s wife and staffers at the Wainwright building in downtown St. Louis. Betts and his staff members wore masks; neither Parson nor any of his staffers wore them but they all practiced social distancing during the meeting, which was to discuss freeing up funding for getting city deputies POST commission certified.

Betts said he learned Wednesday about the Parsons’ positive tests and planned to get tested Thursday; he’s also urging his own staff to do the same.

The sheriff said his wife called him when news of the Parsons’ positive tests broke.

“She started making comments about me sleeping out in the car tonight,” he said, adding that he expects to be eating his dinner alone in the basement, and possibly sleeping there until his test results come back.

On Saturday, Parson shared a stage with other Republican officeholders at a campaign event in Springfield. Others with him included Treasurer Scott Fitzpatrick, Secretary of State Jay Ashcroft, Attorney General Eric Schmitt and Lt. Gov. Mike Kehoe.

Williams said state officials are working with the Cole County Health Department to begin contact tracing in an attempt to track down people who had extended contact with the Parsons in recent days.

Although the governor has been actively traveling to events across the state, Williams said he thinks the number of people he spent more than 15 minutes with is low.

“Our preliminary inspection shows this will be a relative small number of people,” he said.

State bidding documents also show the state is preparing to spend federal emergency stimulus money to hire a company to provide contact tracing capabilities to the state. Parson had previously said that was a duty of the counties.

Although Parson has recommended people wear masks when they are unable to socially distance, he doesn’t always follow his own advice. In July, speaking without a mask at an event in Sedalia, he reiterated his stance.

The DHHS’ Williams, a physician, said he still isn’t recommending Parson impose a mask mandate across the state, arguing that the state’s diversity would make it untenable.

“One size doesn’t fit all,” Williams said. “If you are too draconian about it, it’s almost as if it creates more problems than it solves.”

The Capitol has been the site of at least nine infections of elected officials and legislative staff. Two members of the House have tested positive.

“For public figures, it is very hard to social distance,” Williams said.

The first lady, a mother of two children and six grandchildren, is a native of Bolivar and grew up on a cattle farm with her three brothers. She and the governor were married in 1985.

She worked in the banking industry for 40 years.

In a brief recorded statement Wednesday afternoon, she said she woke up with “cold-like symptoms” and decided, because she and her husband are out in the public, she should be tested. Despite testing positive, “I am fine.”

“I will see you again soon.”

Ralph Northam, a Democrat, is the country’s only governor who is also a doctor.

The governor's isolation is set to end Oct. 3

Teresa Parson had promised to move forward with the event, as scheduled, despite recently testing positive for COVID-19.

Controversial pandemic consultant gets another $300,000 from Missouri

The payouts are part of a controversial no-bid contract the state inked with the firm in May worth $248,000 per month.

Parson makes no commitment to mask order for high-risk counties after meeting with Dr. Birx

Missouri Gov. Mike Parson and his wife, Teresa, leave a meeting with representatives from the Washington University School of Medicine where they learned about a new saliva test for coronavirus recently approved by the FDA on Thursday, Sept. 3, 2020. (Robert Cohen, rcohen@post-dispatch.com)

Gov. Mike Parson announced Wednesday, Sept. 23, 2020, that he and his wife, Teresa, have tested positive for COVID-19. (Screenshot from Parson's Facebook site)