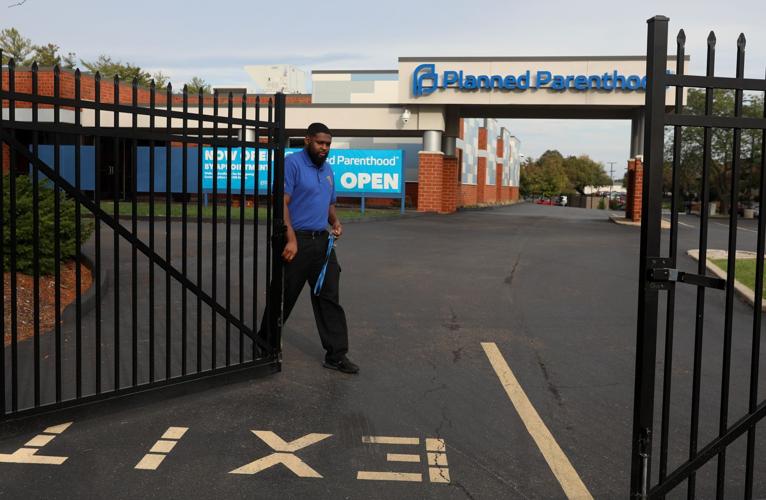 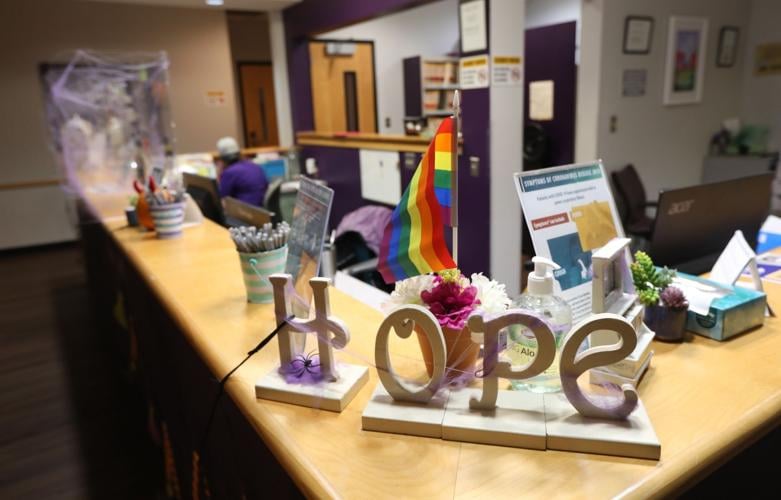 Block letters spell HOPE on a desk in a check-in area at the Hope Clinic for Women, which provides abortion services, on Wednesday, Oct. 13, 2021, in Granite City, Illinois. Photo by Laurie Skrivan, lskrivan@post-dispatch.com

On Friday, Planned Parenthood of the St. Louis Region announced a regional logistics center that will be based at its Fairview Heights clinic. The center will use private money to help pay hotel, child care and travel costs for patients coming to the clinic from other states. Staff will also help patients connect with community organizations providing similar assistance and resources.

“This center is a first of its kind within the Planned Parenthood Federation, and I’m incredibly proud it’s here in Illinois,” said Illinois Gov. J.B. Pritzker, who attended the Zoom call on Friday. The announcement coincided with the 49th anniversary of Roe v. Wade, the Supreme Court ruling that legalized abortions nationwide.

As a ribbon was cut for the site in Fairview Heights and attendees clapped over Zoom, thousands of anti-abortion activists gathered in Washington, D.C., to walk in the March for Life, an annual protest going back decades. Marchers this year expressed hope that this would be the last time they would gather, if the U.S. Supreme Court overturns Roe when it rules on the constitutionality of a Mississippi law that bans abortion after 15 weeks.

Yamelsie Rodriguez, president and CEO of Planned Parenthood of the St. Louis Region and Southwest Missouri, said the logistics center had been under development for two years — prior to another restrictive law passed last year in Texas, which generally bans abortions after six weeks.

“We are prepared to scale up the operations of the regional logistics center should the Supreme Court reverse protections under Roe, or restrict them even more,” Rodriguez said. Every year, Planned Parenthood of St. Louis continues to see a rising trend of out-of-state patients traveling for abortion care. After the Texas law passed, out-of-state patient visits increased by 40%, she said.

During Pritzker’s remarks, he noted that there might not be a 50th anniversary for Roe v. Wade. Every state that borders Illinois is making moves to ban or restrict abortion, he said. Illinois should become “a refuge for reproductive rights,” he said.

In contrast, Missouri’s Republican governor, Mike Parson, signed legislation in May banning abortions starting in the eighth week of pregnancy, with exceptions for medical emergencies but not for cases of rape or incest.

A Missouri lawmaker said last month she would like to see a “Texas-style” law on Missouri’s books, outlawing abortions once cardiac activity is detected in an embryo. Typically, this occurs around six weeks, often before a woman knows she is pregnant.

Iowa tried a “heartbeat” bill three years ago that a judge declared unconstitutional. Also three years ago, a federal judge rejected an effort by Kentucky lawmakers to ban the procedure after 15 weeks.

Lawmakers who oppose abortion in Indiana said Friday they’ll wait to see what the Supreme Court decides on the Mississippi law before going forward with more restrictive bills.

“With reproductive rights under attack, it’s never been more vital for the state of Illinois to ensure access to reproductive services,” Pritzker said.

The Hope Clinic for Women, an abortion provider in Granite City, is a partner with Planned Parenthood on the local effort. The regional logistics center is funded by a combination of philanthropic and private dollars. No donors wanted to be publicly identified, said Bonyen Lee-Gilmore, spokeswoman for Planned Parenthood of St. Louis.

The number of women crossing state lines to come to Illinois for the procedure has risen every year since 2014.

Planned Parenthood said Missouri officials' attempt to stop reimbursing the group for some medical procedures is unconstitutional and illegal.

Missouri could make it harder to get out-of-state abortions

While some legal experts doubt that Rep. Mary Elizabeth Coleman’s proposal is constitutional, they also worry that the U.S. Supreme Court might refuse to intervene to stop it — just as it did with the Texas law.

Block letters spell HOPE on a desk in a check-in area at the Hope Clinic for Women, which provides abortion services, on Wednesday, Oct. 13, 2021, in Granite City, Illinois. Photo by Laurie Skrivan, lskrivan@post-dispatch.com