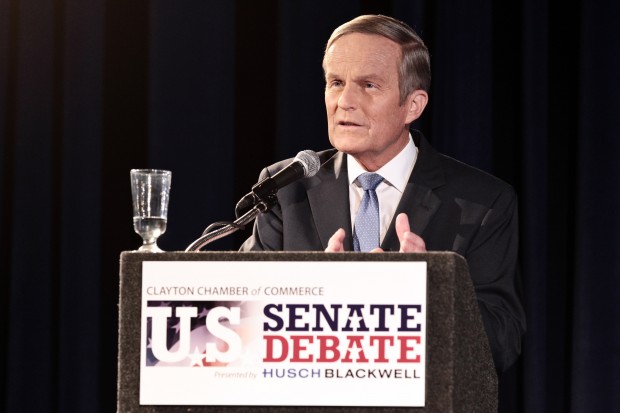 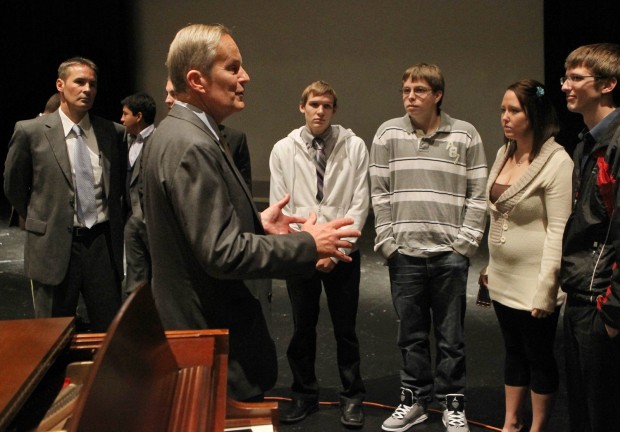 U.S. Rep. Todd Akin talks to visiting political science students from Culver-Stockton College about his educational background and his "calling" into politics on Wednesday, Oct. 10, 2012. Photo by J.B. Forbes, jforbes@post-dispatch.com

ST. LOUIS   •   Congressman Todd Akin was arrested at least three times in the 1980s during anti-abortion protests, not just the one time he has publicly acknowledged.

Akin's previously undisclosed arrests, in 1985, were for criminal trespass and resisting arrest at abortion clinic protests in St. Louis and Illinois.

Akin, a Republican who is trying to unseat Democratic Sen. Claire McCaskill, boasted last month that he'd once been arrested at an anti-abortion demonstration years earlier. A long-time anti-abortion activist, he referenced the event as one he was proud of, but his campaign didn't provide additional details.

The additional arrests came to light during a new search of the newspaper's archives. The arrests were missed in previous searches because the news stories had listed Akin by his given first name, William.

Akin subsequently started going by his middle name, Todd, when he began his political career in the state legislature in the late 1980s, and has been listed as Todd Akin in media coverage since then.

In an emailed response, Akin spokesman Rick Tyler dismissed the issue as “something that happened a quarter century ago.”

The liberal group People for the American Way, which has been hammering at Akin's past in the anti-abortion movement, said that past should disqualify him from office.

“These were not non-violent protests," Michael Keegan, president of the group, said in a written statement. "These were aggressive, physical efforts to shut down clinics . . . What’s remarkable is how long Todd Akin has been able to hide these incidents.”

In a speech to supporters in September, Akin casually mentioned that he'd been arrested years ago at an anti-abortion demonstration. “Don't tell anybody I'm a jail bird," he joked. He described how “a bunch of us sat in front of these doors and the police gave us a ride to the free hotel for a while, and you know how it goes.”

At a press conference later, Akin offered a little more explanation, saying: “Probably about 25 years ago or so I was involved in some peaceful protests. As I've made very clear I don't apologize for being pro-life. I stand up for the things I believe in.”

Akin was apparently never charged with anything. St. Louis police don't release arrest records of people who aren't charged. However, the Post-Dispatch wrote about the demonstrations and arrests at the time.

The first of the events, according to the newspaper's archives, was on March 15, 1985. “Nineteen anti-abortion demonstrators who refused to leave the waiting room of an abortion clinic in the Central West End were carried out by St. Louis police officers Friday morning,” read the next day's paper.

Among those arrested, according to the story, was William Akin, 37, of a Creve Coeur address. The age and address are consistent with other information the newspaper has about Todd Akin.

Three weeks later, another six protesters, including Akin, were arrested at another St. Louis demonstration. “Police had to carry Akin into an elevator,” the story read.

On April 5, 1985, Akin was arrested for a third time, one of 10 protestors who were “attempting to block entrances” at Hope Clinic for Women in Granite City, according to the paper. One clinic employee told the paper that the protestors caused minor damage and leveled “verbal abuse” at women entering the clinic.

Akin's strong anti-abortion beliefs are no surprise to those who have followed his career, especially this year. He is in an uphill election battle, after his campaign was set back by his August comments on “legitimate rape” and pregnancy.

Akin told an interviewer Aug. 19 that the female body has ways to “shut that whole thing down” to prevent rape-induced pregnancy. There's no medical evidence for the claim, but it's been touted for years by the anti-abortion movement as an answer to those who say anti-abortion laws should make exceptions for rape victims.

The Todd Akin-Claire McCaskill U.S. Senate race is making another furious round of national internet headlines and blog postings following the…

McCaskill, Akin get personal in debate

McCaskill alleges that Akin pays women on his staff less than he does the men in his office.  Akin says McCaskill got rich profiting from federal programs designed to fight poverty.

Todd Akin, Claire McCaskill reveal what they would do in the Senate

The candidates in Missouri's Senate battle outline their plans if elected.

`Women Standing with Akin' events next week will target his biggest problem.

U.S. Rep. Todd Akin talks to visiting political science students from Culver-Stockton College about his educational background and his "calling" into politics on Wednesday, Oct. 10, 2012. Photo by J.B. Forbes, jforbes@post-dispatch.com