St. Louis Treasurer Larry Williams says he is running for re-election
0 comments
Share this
{{featured_button_text}}
1 of 2 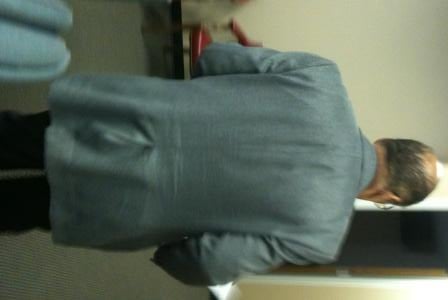 ST. LOUIS • City Treasurer Larry Williams, appearing publicly for the first time since one of his employees was arrested on fraud and theft charges last week, said this morning that he can't comment on the federal investigation.

However, he said, he is running for re-election this coming year.

Williams chaired a meeting of the city's Parking Commission, held inside his downtown offices above the garage on 11th Street.

After the meeting, he responded briefly to questions about employee Fred W. Robinson, who was indicted last week on federal charges that he stole $250,000 from a charter school and reaped as much as $175,000 over at least five years for a no-show job in the treasurer's office, prosecutors claimed.

Williams said he had received no questions from the general public about either Robinson or his office's stance on the issue, and wanted to know exactly who, specifically, was interested in such things.

But, when asked about specifics, Williams said he couldn't comment.

Williams then left the conference room and entered private offices.

South City Alderman Fred Wessels announced early this week that he would challenge Williams for his seat.

Philadelphia's got starting pitching — as well as graft, venality and corruption.

Williams' golf fundraiser was the day before an employee and longtime friend was indicted on charges he falsified time sheets.

Jones said she would try to strip the treasurer's office of its responsibility for city parking garages and parking meters.

As others eye his office, the latest scandal may be too much for even Larry Williams to survive.

Alderman Wessels will seek nod for city treasurer in '12

Larry Williams’ silence has caused City Hall regulars to question the culture in his office.

ST. LOUIS • Nine months ago, two city offices refused to release records that would have revealed the salary, position and hiring date of Fred…

City Treasurer Larry Williams and Mayor Francis Slay both denied releasing records that would have revealed the salary of Fred Robinson, arrested for holding a no-show job making $35,000 a year