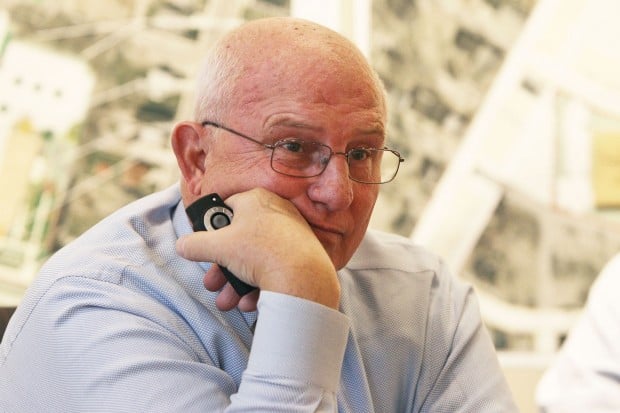 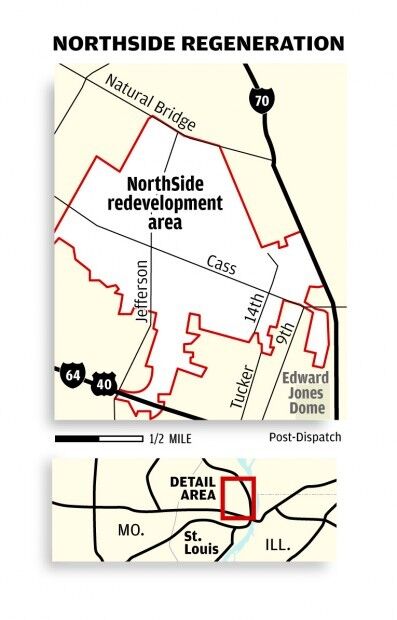 JEFFERSON CITY  •  Paul McKee will make a personal appeal to Missouri legislators today to extend a state tax credit program that has paid his company more than $40 million and that he hopes will provide $50 million more for his massive makeover plan for north St. Louis.

The O’Fallon-based developer has amassed 2,200 parcels for his NorthSide Regeneration project, which calls for landscaped streets, new homes, shopping plazas, factories, medical clinics and schools in a 2-square-mile area north of downtown.

But delays caused by litigation and the recession have pushed him up against the deadline to claim the full $95 million in tax credits that legislators approved in 2007, when they established the Distressed Areas Land Assemblage program. The program will expire in August.

“I see no way of doing it without the tax credit, because we’re still short 500 parcels” needed for contiguous sites, McKee said in an interview Monday. “We’ve bought the easy pieces. The last 500 pieces are the hardest.”

He will come to the House Economic Development Committee armed with white papers that contend that investing in his vision for some of the poorest neighborhoods in the state will save the state money in the long run, by reducing the area’s costs for education, health care, housing and corrections.

But persuading the state to open its wallet again could be a tough sell when officials are trying to rein in tax credits. Critics note that McKee’s plan hasn’t produced a return for taxpayers yet.

“It doesn’t make any sense at all to reauthorize Mr. McKee’s gigantic tax credit for a program that hasn’t had any effect,” said Andrew Weil, director of Landmarks Association of St. Louis, a nonprofit group that promotes historic preservation.

Weil said small-scale developers “have been the engines driving redevelopment and revitalization” in St. Louis neighborhoods. Yet the state’s popular historic preservation tax credit, which has made many of those projects possible, is again on the Legislature’s chopping block.

The House committee will hear testimony starting at 5 p.m. on various tax incentive proposals, including the one for McKee’s project.

The bill, sponsored by the committee’s chairman, Rep. Anne Zerr, R-St. Charles, would extend the land assemblage credit program for six years, allow the state to issue an additional $95 million in credits and broaden the program to cover more of McKee’s development expenses.

A project in Kansas City also would become eligible for the subsidies. Half of the newly allotted $95 million would be reserved for McKee’s NorthSide Regeneration and half for the Kansas City project.

The tax credits reimburse developers for some of the costs of buying and maintaining land for large-scale projects in impoverished urban areas. The Legislature custom-designed the program for McKee, and he has been the only one to use it so far. Since 2009, NorthSide has collected $41.8 million in credits. Much of the money reimbursed loan interest and other borrowing costs associated with the project.

McKee, chairman of McEagle Properties LLC, is best-known for the 1,100-acre WingHaven development in St. Charles County. He also is co-developer of NorthPark, an industrial project near Lambert-St. Louis International Airport that includes Express Scripts, the pharmacy-benefits company.

McKee points to NorthPark as his model for developing a blighted area. “It takes a large project to bring jobs,” he said. “No one is going to come to a distressed area unless they’re surrounded by other revitalizations.”

That’s why his proposal in the city, for NorthSide, stretches across a 1,500-acre footprint, reaching as far east as Interstate 70 and North Florissant Avenue and as far west as Grand Avenue. In the center is the abandoned Pruitt-Igoe public housing site.

St. Louis aldermen in 2009 approved $390 million in tax-increment financing subsidies for the project, money McKee wants to use to build sewers, streets and new utilities to attract companies to the area. But in 2010, a St. Louis circuit judge threw the project out, saying McKee’s plans were too vague to justify blighting so much land. McKee appealed and is awaiting a ruling from the Missouri Supreme Court.

The lawsuit has slowed progress on NorthSide, but McKee is undaunted. He says he has spent $103 million on the project, resulting in a net investment of $63 million after the tax credits are taken into account.

“We’re very hopeful that we’ll be permitted to proceed” when the high court rules, McKee said. “If not, they’ll tell us what needs to change,” and he plans to fix it.

Meanwhile, McKee has hired an army of lobbyists to press for extension of the tax credit program. The 21-member team is led by Cardinals lobbyist John Bardgett and also includes former state Rep. Rodney Hubbard, whose successor, and mother, Rep. Penny Hubbard, is a co-sponsor of Zerr’s bill. Rodney Hubbard’s father is executive director of a nonprofit housing group that owns a 2.5 percent share of NorthSide Regeneration.

But the biggest change in strategy is the visibility of McKee himself.

In 2007, legislators quietly tucked the land assemblage program into a broader economic development bill, drawing criticism. Since then, McKee has become much more visible. He and his wife, Midge, have attended city ward meetings to explain their ideas. He has invited dozens of legislators to his St. Louis project headquarters for one-on-one or small-group presentations.

There are plenty of skeptics.

But McKee has some new allies, thanks to a provision that would make a project in south Kansas City eligible for the credits.

Ever since the once-busy Bannister Mall fell into disuse and was demolished, Kansas City officials have been trying to spur redevelopment of the 300-acre site near Interstate 435 and Bannister Road.

“We have lost businesses all around the area, and we’ve seen an increase in housing vacancies,” said John Sharp, the city councilman whose district includes the site. “If we can get this site redeveloped, it will save an entire community.”

The latest plan calls for a high-tech office park. Land assembly tax credits “would be extremely helpful in redeveloping that area,” said Rep. Kevin McManus, D-Kansas City. “It’s been hard to get folks interested in it because it would be an enormous project to take on.”

Under the bill, the state could give out $30 million in credits annually — up from the program’s current annual cap of $20 million. Instead of waiting until the end of the year to claim the credits, the developers could seek payments quarterly.

The bill would eliminate a five-year restriction on recovery of interest costs, lengthening the reimbursement to 12 years. Also, developers could get paid for 100 percent of demolition costs, up from 50 percent. They would continue to get 50 percent of their acquisition costs, but eligible costs would be broadened to include engineering, surveying, title insurance and architectural and design services.

He hired former legislative tax researcher Brian Schmidt to compile a series of analyses examining the decline in the project area’s seven census tracts. For example, the population in 2010 — 14,821 — was about a quarter of what it was in 1970. The median income there was $18,025.

Data crunched by Schmidt showed that the area ranks worse than the rest of the state in unemployment, high school dropouts, out-of-wedlock births and murders. Getting the area’s cost for education, housing, corrections and health care down to the state average would save the state at least $22 million a year, under that analysis.

Others contend it’s a leap to say that redevelopment will cut the high cost of social programs.

Given the lack of detail available in McKee’s plan, “I can’t really say whether it’s going to have any kind of impact,” said Will Winter, a researcher at the Public Policy Research Center at the University of Missouri-St. Louis. “Impacting these complicated community problems, they take a long time. They take generations.”

Tim Logan of the Post-Dispatch contributed to this report.

Since 2009, NorthSide Regeneration has received $41.8 million in Distressed Areas Land Assemblage tax credits from the Missouri Deptartment of Economic Development, mostly to reimburse land buying and borrowing costs. Now NorthSide's backers hope to extend the program, which is due to expire in August.

Never mind tax credits and budget battles, Missouri lawmakers would rather spend their time battling over the state's new plane and whether th…

Latest on tax credit reform: Senate panel has a plan

Slay among supporters at hearing on 'McKee tax credit'

Republican leaders in the House and Senate remain far apart on the subsidies.

First retail tenant coming to NorthSide? Not quite yet

Even dollar store is waiting on the Supremes

Zoom closer to see purple parcels owned by McKee and yellow parcels the city of St. Louis is selling to the developer.

The Senate has refused to start new tax credit programs -- or renew expiring ones -- unless the Legislature also reined in the costliest ones.