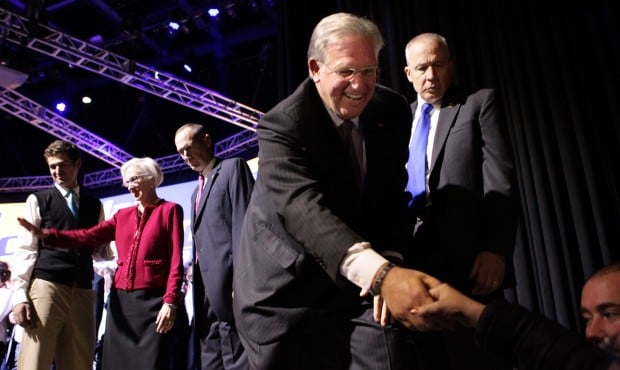 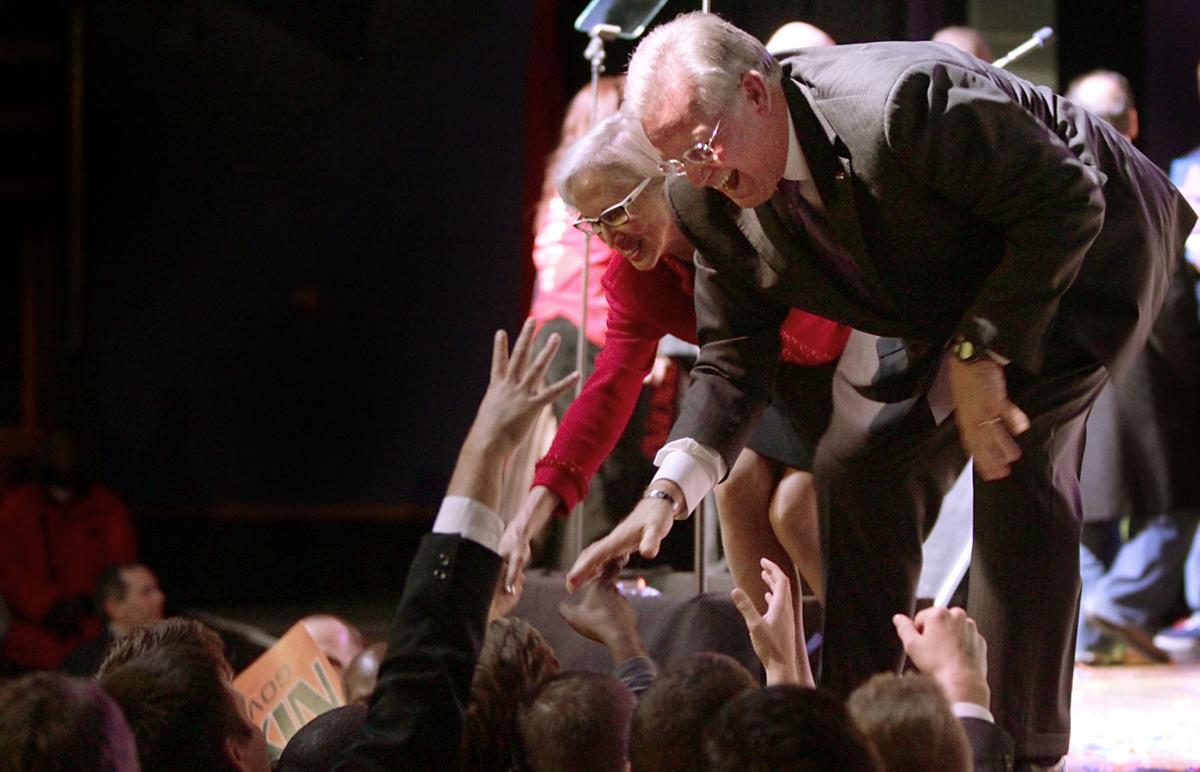 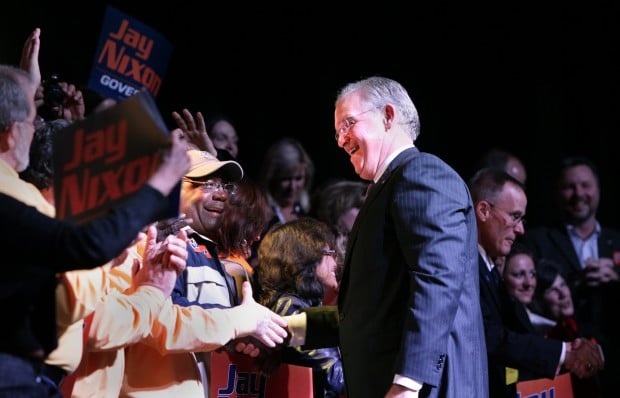 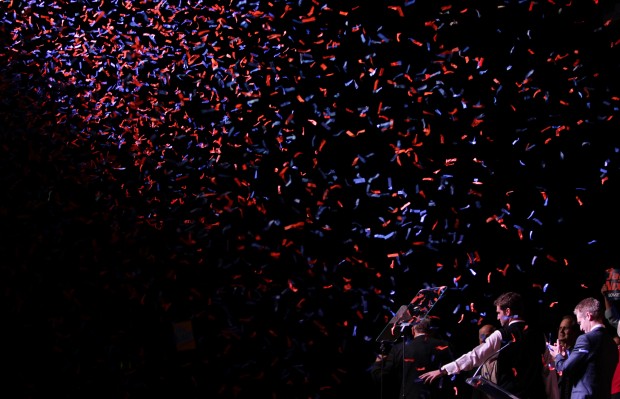 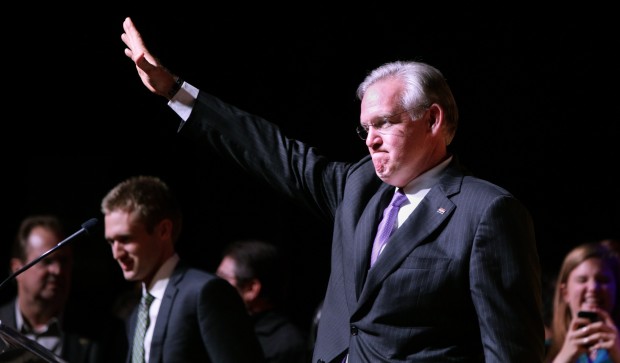 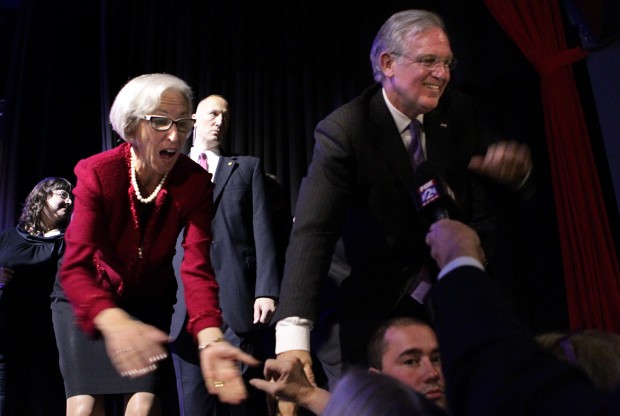 Fresh from decisively winning a second — and final — term as Missouri’s governor, Nixon wouldn’t give an answer when reporters asked whether this fall’s campaign had been his last.

“All I’ll say is, it felt pretty good” to finish the race, Nixon said Thursday. He ducked two more queries aimed at getting him to talk about his political future.

Missouri governors are limited by law to two terms. Some politicians and pundits have speculated that Nixon, a conservative Democrat who took nearly 55 percent of the vote on Tuesday, may be angling for the national spotlight next.

Such ambitions could affect what issues Nixon pursues as governor and whether he spends his political capital to try to accomplish tough goals, such as Medicaid expansion. Operating in a state where Republicans overwhelmingly call the shots in the Legislature, Nixon has a tricky path to tread either way.

“I think that Jay Nixon very well might have his eye on a vice presidential or a presidential role in four years, and I wish him well in that,” said Rep. Rory Ellinger, D-University City.

A run for the U.S. Senate also could be a possibility. The path from governor to senator has been traveled in the state by both John Ashcroft and Christopher “Kit” Bond. Nixon’s term ends in 2016, when first-term Sen. Roy Blunt, a Republican, will be up for re-election.

But Nixon’s ambitions shouldn’t stop him from leading the charge on issues such as expanding access to health care and child care for low-income workers, Ellinger said.

“I always say about the governor, ‘He has money in the bank in terms of political power, and he should use it,’” Ellinger said, “particularly in the area of education and medical care.”

Exercising that power could become more difficult for Nixon now that both chambers of the Legislature will have more than two-thirds Republican majorities. That means that if GOP members stick together, they can override any Nixon vetoes.

Republican House Speaker Tim Jones of Eureka has said he hopes a more-engaged Nixon emerges from his victory at the polls. Republicans complain that the governor doesn’t share his concerns about legislation until a bill is already on his desk and he is ready to veto it.

Nixon denied that. He said he and his staff work hard to communicate with legislators about pending bills.

Asked about dog-breeding and workers compensation bills that he vetoed in 2011 and 2012, respectively, Nixon said: “On both of the things you mentioned, a lot of people had a lot of feedback on the third floor (where the Legislature meets) during that process, and they know it.”

Whatever his political plans, some expect the cautious, no-mistakes approach that has become the governor’s trademark to remain.

“If you look at his last years in office, he’s pretty much been the same guy all along — a pretty conservative guy who plays things close to the vest. I’m not sure we’ll see a lot of change in that,” said Sen. Jolie Justus, D-Kansas City and the newly elected Senate minority leader.

Like others in the Capitol, Justus said she wasn’t sure what Nixon wants his legacy to be, but she hopes to ask him soon.

“I’d love it if he’d tell me, ‘Here’s one thing I’d really like to see happen in the next four years.’”

As only the second two-term governor since Democrat Mel Carnahan was re-elected in 1996, Nixon has a chance to leave his mark, a point he made at the news conference.

“It’s been a lot of years since somebody had the opportunity that the people have given me, which is a second term, and I’m really excited about it,” Nixon said. “I really am.”

He promised to lay out “a clear, cohesive, comprehensive agenda” in the next couple weeks and in his State of the State speech and budget address in mid-January. So far, Nixon is sticking to safe themes.

In his victory speech Tuesday night in St. Louis, he stressed homilies such as “putting the common good first,” focusing on shared values and “igniting optimism in folks’ lives when it’s needed most.” At his Capitol news conference on Thursday, he announced he was launching a government efficiency study.

He refused again to say what he thinks of the potential expansion of Medicaid as envisioned by the federal health care law, saying he’ll reveal his decision when he releases his budget plan in January. Republicans in the Legislature strongly oppose the idea, calling it too costly.

How Nixon addresses polarizing issues such as health care could be the test that determines how his national stock fares.

“The state is not a real red state,” Ellinger said, “so he should use his moderating influence and his rural connections with the majority party, in terms of negotiating reasonable solutions.”

If Nixon does have an interest in building a national profile, he may need a signature accomplishment — besides balancing the state budget and keeping taxes down — to grab headlines.

As one of just 20 Democratic governors, Nixon would have an opportunity to attract such a spotlight, something he hasn’t attempted up to now. But it would require a concerted effort.

Nixon isn’t a leader in the National Governors Association, a forum for ambitious governors to gain attention. He isn’t on the association’s executive committee heading into 2013 and doesn’t chair any of the group’s standing committees on key issues.

Nor has he signaled that he might use the Democratic Governors Association as a springboard, like the group’s current chairman, Maryland Gov. Martin O’Malley.

Cuomo has two advantages; a well-known name and a high-profile state, essential in early fundraising.

O’Malley has scarcely hidden his ambitions, making himself available relentlessly to the national media and even showing up at the GOP convention in Tampa, Fla., in August offering comments to whomever would listen.

In the late 1980s, Bill Clinton, then governor of Arkansas, did much the same, cultivating reporters around the country in long, friendly phone conversations. “It’s a very difficult route to the top,” said political historian Allan Lichtman, of American University. “It would be hard to make your name as governor of Missouri, but there’s time.”

Lichtman noted that people on the rise typically need either “a spectacular achievement” or a forum for a breakout moment — like then-state Sen. Barack Obama was handed at the 2004 Democratic National Convention, where he gave the keynote address.

Lichtman has been called the “never-wrong pundit” for forecasting the winner of presidential elections well in advance for eight straight elections based on methods in his book, “Keys to the White House.” He believes the 2016 contest for the Democratic nomination will come down to Hillary Clinton versus the field. If she doesn’t run?

“Democrats do have a history of picking dark horses who you would never have imagined running for president,” he said.

How Nixon would play on a national stage could depend on the path he takes the next two years.

He won Tuesday’s election by wooing moderate, independent voters in key battleground areas such as Greene County in southwest Missouri, St. Charles and Jefferson counties in the St. Louis area, and Clay and Platte counties in the Kansas City area.

“He has a strong, natural appeal to independent voters because he governs in the middle, which is where most folks are,” said Oren Shur, Nixon’s campaign manager.

Nixon also has close ties to some traditional Democratic constituencies, such as labor unions, which helped turn out the vote in urban areas.

But he has never been the darling of minorities or the liberal wing of the party, partly because of his long fight as attorney general to end the St. Louis school desegregation case.

He also has alienated some women voters in the party with what they viewed as his tepid support of abortion rights. However, he shored up support there with his veto this summer of a bill that would have allowed employers to opt out of covering abortion, contraception or sterilization in health insurance policies, if such coverage ran contrary to their religious beliefs.

The Legislature later overrode that veto.

Close associates of Nixon’s say they don’t know whether he harbors national ambitions or simply wants to avoid being seen as a lame-duck governor.

“There are reasons to say, ‘I’m not ready to be put out to pasture, I’m still in the game here,’” said Jefferson City attorney Chuck Hatfield, who served as Nixon’s right-hand aide in the attorney general’s office. “All politicians, you never want to say you’re done, because you’ve got to maintain your relevance.”

It is looking very possible that a major party candidate for president might come from Missouri in 2016. Gov. Jay Nixon has a great winning re…