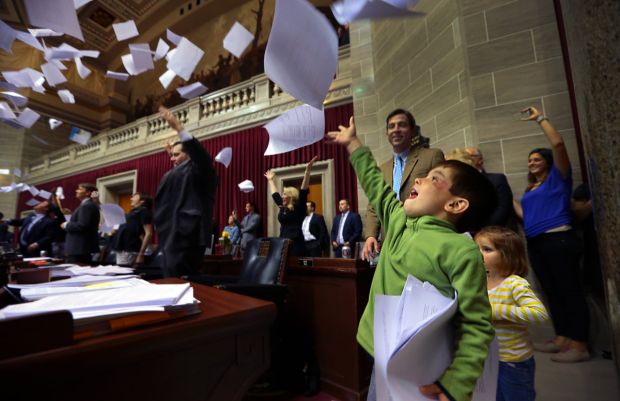 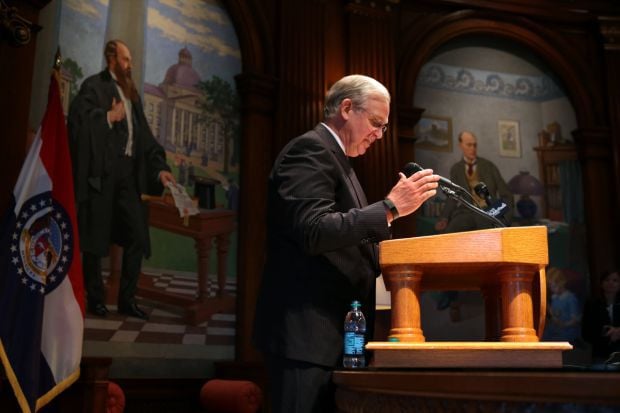 Missouri Gov. Jay Nixon holds a news conference following the end the 97th Legislature at the Missouri State Capitol in Jefferson City on Friday, May 16, 2014. Photo by Robert Cohen, rcohen@post-dispatch.com 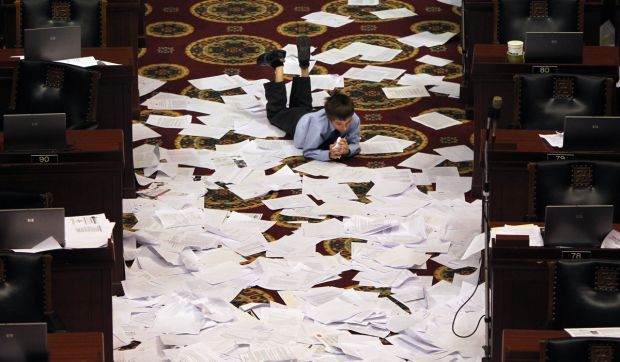 Jeremiah Koenig, 8, son of Missouri State Rep. Andrew Koenig, R-St. Louis, looks over papers as he gathers more to throw following the end the 97th Legislature at the Missouri State Capitol in Jefferson City on Friday, May 16, 2014. Photo by Robert Cohen, rcohen@post-dispatch.com 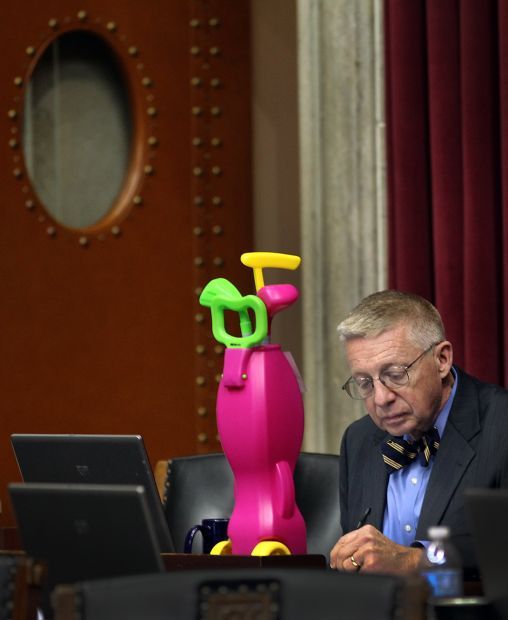 Missouri State Rep. Chris Kelly, D-Boone, keeps his "senior citizen retirement" golf clubs at the ready as he works on the final day of the 97th Legislature at the Missouri State Capitol in Jefferson City on Friday, May 16, 2014. Rep. Kelly, who is retiring at the end of the year, was given the set as a retirement gag gift. Photo by Robert Cohen, rcohen@post-dispatch.com 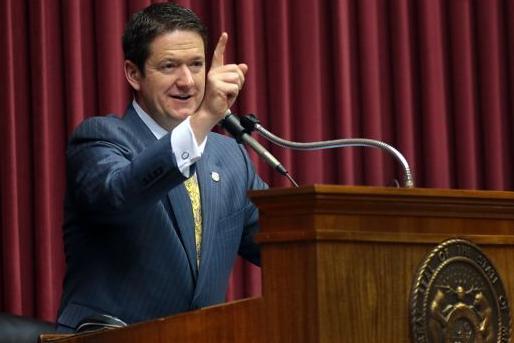 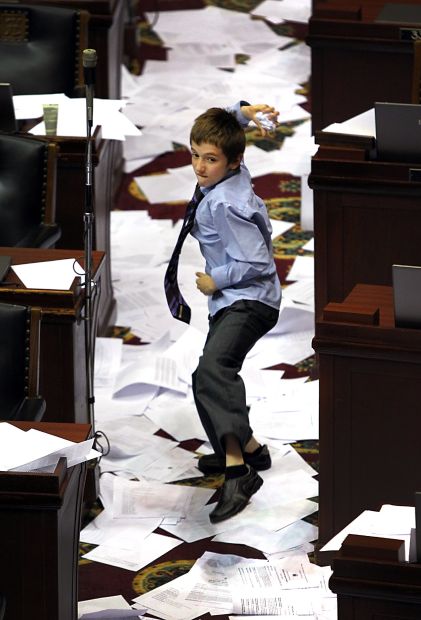 JEFFERSON CITY • After months of tense, ideological battles over tax policy, the end of the Missouri Legislature’s session Friday was marked by a relaxed atmosphere and bipartisan celebration over a bill that legislators said could profoundly improve life for the state’s children.

The House passed and sent to Gov. Jay Nixon, a Democrat, a bill that would gradually trigger state funding to public school districts to provide pre-kindergarten programs for low-income children ages 3 to 5.

“This is huge,” said Sen. Joe Keaveny, D-St. Louis and a longtime champion of the proposal. “This is the best thing that we’ve accomplished education-wise in my tenure and probably for 10 years before that.”

Early childhood education will help teachers spot learning problems before children fall behind, said the bill’s handler, Sen. David Pearce, R-Warrensburg. He called it a “very narrowly tailored bill” that would be voluntary for families and school districts.

And in one of their last acts before the 6 p.m. mandatory adjournment, lawmakers signed off on a $600 million state bond issue, to pay for deferred maintenance and construction projects across the state. Rep. Chris Kelly, D-Columbia, who was first elected to the House in 1982, called Friday his best day in the Legislature because of passage of that bill.

While those measures passed, a bill to nullify all federal gun laws fizzled on Friday when it got hung up first in a GOP dispute and later, in a last-minute Democratic filibuster. And a bill to add sexual orientation and gender identity to the list of classes protected from workplace discrimination never got off the starting blocks.

Before the bustle of the final day, legislators had already passed Republicans’ top priorities: a state income tax cut, a revamped school transfer law, the revision of the state’s criminal code and a longer waiting period for abortions. Republican leaders proclaimed the session a success even before the final gavel fell.

Nixon, a Democrat who battled fiercely with legislators on taxes and other issues this session, had a different take. The governor tore into the Legislature for what he termed a lack of fiscal discipline and a “rush to give more special tax breaks to more special interests.”

In the last eight hours of the session, Nixon said, legislators approved income and sales tax breaks worth between $263 million and $483 million for “fast-food restaurants, power companies, personal seat licenses at stadiums, dry cleaners” and others.

Legislators also increased some of his budget recommendations and appropriated money for 30 new programs, he said.

“This is a wrong path and I’m going to correct it,” he said, pledging to use both his veto pen and withholding power to balance the budget.

Republicans used their wide majorities in the House and Senate — and crucial support from one House Democrat — to enact a $620 million income tax cut over Nixon’s veto.

In five annual steps beginning in 2017, that bill will cut the state’s top personal income tax rate to 5.5 percent from 6 percent and provide a new 25 percent deduction for business income reported on individual returns. The cuts kick in only if state revenue targets are met.

Republicans said the tax cut would boost economic activity. The governor contends it could wipe out the state’s top tax bracket, costing the state $4.8 billion annually and jeopardizing education funding.

Nixon also lost his fight for the state to expand Medicaid to cover 300,000 low-income adults making up to 138 percent of the federal poverty level, or about $27,310 for a family of three.

Under the federal Affordable Care Act, the federal government initially would pay the full cost, with the state’s share gradually phasing up to 10 percent.

Opponents said that the Medicaid program was broken and that the state couldn’t trust the federal government to keep its promise to pay the bulk of the cost. They rejected a plan developed by Sen. Ryan Silvey, R-Kansas City, and a business coalition that relied on savings from shifting people to federally paid coverage.

“There’s no way to do this ... and say somehow it’s not going to cost us anything,” said Sen. Kurt Schaefer, R-Columbia.

Legislators did approve a bill shortening the waiting period for children to enroll in the state’s Children’s Health Insurance Program, an extension of Medicaid that covers children in families making up to three times the poverty level.

“To keep a child off of coverage that they qualify for, it’s unconscionable,” said Rep. Chris Mollendorp, R-Belton, who handled the bill. To comply with federal changes, the measure also removes the requirement that a family have no more than $250,000 in assets for the children to qualify.

Nixon and legislators differed on the school transfer bill, which would rewrite the rules for how students in unaccredited districts transfer to accredited schools. The Legislature’s plan includes the option of students’ transferring to private, non-religious schools in certain circumstances. Nixon said he opposed sending public money to private schools.

One question in the Capitol hallways was whether Nixon would veto the transfer bill and call legislators into a special session to rework it. Dempsey discouraged that option, saying that special sessions work only if a deal has been cut in advance, and none has.

Earlier in the week, legislators approved a constitutional amendment that, if passed by state voters in November, would raise the state sales tax by three-quarters of a percent. That would generate $534 million a year for state and local transportation projects, including mass transit.

Legislators also adopted Nixon’s bonding plan that will fund a new maximum-security mental hospital to replace a dilapidated one in Fulton.

A measure of consensus even developed on Common Core, as a bill was approved allowing the educational assessments to be used in schools starting next year, as planned. But it also requires work groups composed of educational professionals, experts, parents and business leaders to meet starting in October and present recommendations on academic performance standards to the State Board of Education a year later.

The preschool bill drew widespread support. Research indicates that children from low-income families generally enter kindergarten far behind their more well-off peers. Preschool gives working parents more opportunities for their children, supporters say, and the payoff for the state is that the children will be less likely to have to repeat grades and more likely to graduate.

Sen. Jason Holsman, D-Kansas City, said he was a prime example. His parents were ages 16 and 17 when they had him, and they “didn’t have two nickels to rub together,” he said. If his grandfather hadn’t sent him to a Montessori preschool as a toddler, “I probably wouldn’t be standing right here.”

“We’re going to spend a lot of money and a lot of time and we’re not going to do anything for the root cause of the problem, which is restoring the family structure,” said Sen. Ed Emery, R-Lamar.

But most Republicans backed the bill, sponsored by Rep. Kathy Swan, R-Cape Girardeau. It won House approval Friday on a vote of 127-18. The Senate passed it 25-6 on Thursday.

If Nixon signs it, the preschool money would flow first to unaccredited school districts, moving to provisionally accredited districts in the second year. Eventually, if the state fully funded the basic aid formula for public schools, all districts could receive money based on the number of children eligible for free and reduced-cost lunches, a mark of poverty.

Keaveny supported the Peabody bill, saying, “I’ve been busting my tail to get people to move to the city. This initiative petition goes so far that basically every major employer in St. Louis would be incentivized to go to St. Louis County.”

Alex Stuckey and Marie French of the Post-Dispatch contributed to this report.

A constitutional amendment eliminating tenure for teachers could appear on the November ballot. In Missouri, a teacher is on probation for the…

Mo. lawmakers want to restrict use of state-owned airplanes

Following Nixon's announcement that he will be cutting $1.1 billion of the $26.4 billion fiscal year 2015 budget, some lawmakers are asking for government waste to be cut elsewhere, such as restricting the use of the state-owned airplanes.

Nominees for education work groups sent to Board of Education

Legislators, businesses must invest in their future workers

Voters will decide whether to boost Missouri sales tax for highways, transportation

If approved by voters, the increase would add about eight cents to a $10 purchase.

House Republicans stuck together and picked up support from Rep. Keith English, D-Florissant.

Missouri Gov. Jay Nixon holds a news conference following the end the 97th Legislature at the Missouri State Capitol in Jefferson City on Friday, May 16, 2014. Photo by Robert Cohen, rcohen@post-dispatch.com

Jeremiah Koenig, 8, son of Missouri State Rep. Andrew Koenig, R-St. Louis, looks over papers as he gathers more to throw following the end the 97th Legislature at the Missouri State Capitol in Jefferson City on Friday, May 16, 2014. Photo by Robert Cohen, rcohen@post-dispatch.com

Missouri State Rep. Chris Kelly, D-Boone, keeps his "senior citizen retirement" golf clubs at the ready as he works on the final day of the 97th Legislature at the Missouri State Capitol in Jefferson City on Friday, May 16, 2014. Rep. Kelly, who is retiring at the end of the year, was given the set as a retirement gag gift. Photo by Robert Cohen, rcohen@post-dispatch.com