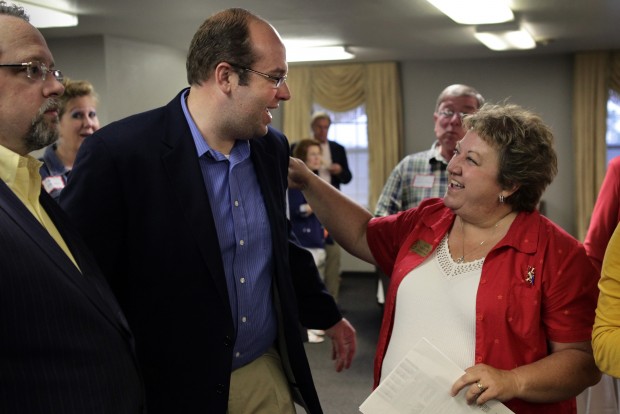 Congressional candidate Jason Smith is greeted by Jefferson County Council member Terri Kreitler during an appearance in Hillsboro on Monday, May 20, 2013. Smith and Steve Hodges are running to replace U.S. Rep Jo Ann Emerson, who resigned from her seat in the 8th Congressional District. Photo by Robert Cohen, rcohen@post-dispatch.com 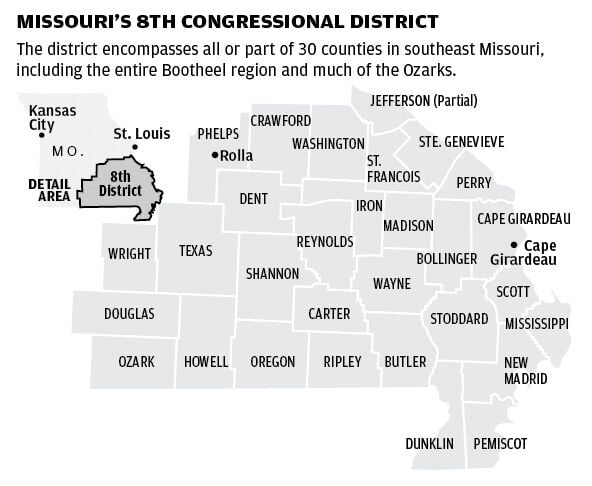 Smith said in an election night interview with the Associated Press that he planned to fly to Washington today with the hope of quickly taking the oath of office.

“We’ve been without representation in the 8th District the last 134 days, and I’m going to stay up there until the speaker of the House will swear me in,” Smith said.

Hodges, 64, said late Tuesday that he believed his campaign’s focus on preserving Social Security and Medicare was beginning to resonate but that there wasn’t enough time in the short campaign to persuade voters in the heavily Republican district to switch sides.

“I took a step back tonight, but I’m going to take two steps forward tomorrow,” said Hodges. “I’m not going to make any excuses.”

Constitution Party candidate Doug Enyart of Piedmont and Libertarian Bill Slantz of St. Charles finished at about 3.6 percent and 1.6 percent of the vote, respectively.

Smith, a bachelor attorney from a fourth-generation farm family in southeastern Missouri, will succeed former U.S. Rep. Jo Ann Emerson, R-Cape Girardeau, who resigned in January to go into the private sector.

Smith will be seated in Congress within a month and will become one of its youngest members.

He also goes in with a hard-right political philosophy that sharply contrasts with that of Emerson, who was widely viewed as a moderate.

Smith’s victory wasn’t a surprise. A GOP win was widely predicted in the conservative rural district since before the party nominee was even chosen.

Smith was elected to the Missouri House in 2005 at age 25 and went on to become one of youngest speaker pro tems in state history.

His politics has been unflinchingly conservative on abortion, guns and federal spending. He tied his campaign into national issues where Republicans hold sway with rural Missouri voters — especially the GOP vow to repeal the federal Affordable Care Act. He touted endorsements from Sarah Palin and the Tea Party Express.

He opposes raising the national debt ceiling, an issue that could be fully in play when he arrives in Washington.

Emerson assumed the seat in 1996, from her late husband U.S. Rep. Bill Emerson, who was first elected in 1981. She served for 17 years before resigning in January to become president and CEO of the National Rural Electric Cooperative Association, a Washington trade group.

Her tenure in Congress was marked by breaks with the party line on issues such as stem-cell research, which she supported, and the Iraq War, which she ultimately opposed.

Those and other indications of political moderation were roundly criticized by Emerson’s would-be GOP successors, more than a dozen of whom vied for the party’s nomination from a committee of Republican leaders in January and early February.

Smith, one of that wide field, was up against others who had more name recognition, age and experience. They included Lt. Gov. Peter Kinder, viewed by many as the most likely nominee, as well as former state Treasurer Sarah Steelman.

After Smith’s surprise nomination on Feb. 9, he gave an emotional speech in which he acknowledged that he “never saw this coming.”

The state will then forward the official results to the chief clerk of the U.S. House. From there, the House will schedule Smith’s swearing-in.

Jason Smith sworn in as newest Missourian in Congress

Jason Smith wasted no time flying to Washington and getting sworn in to the 113th Congress.

In a Q-and-A, Smith talks about his first impressions, his goals and the curious ways of the U.S. House.

Although both candidates are pro-gun, anti-abortion and oppose Obamacare, they found plenty on which to disagree.

Conservative stronghold has the Republican and Democrat bashing Obama for June 4 contest.

Congressional candidate Jason Smith is greeted by Jefferson County Council member Terri Kreitler during an appearance in Hillsboro on Monday, May 20, 2013. Smith and Steve Hodges are running to replace U.S. Rep Jo Ann Emerson, who resigned from her seat in the 8th Congressional District. Photo by Robert Cohen, rcohen@post-dispatch.com