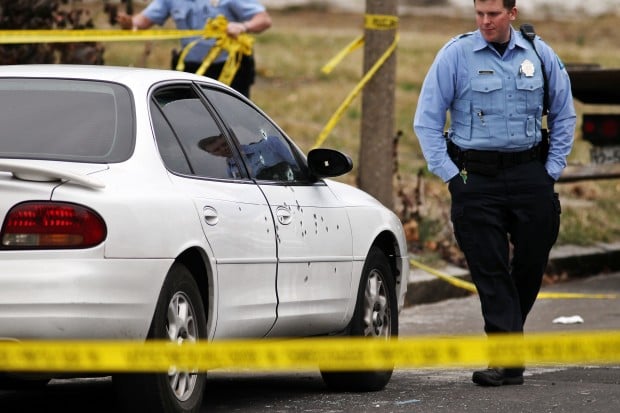 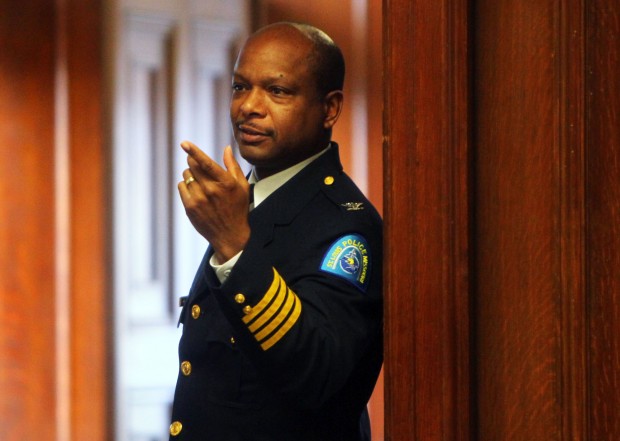 ST. LOUIS • In the face of budget cuts, Police Chief Dan Isom is proposing to reduce the city’s nine police districts and downsize his command staff to restore as many as 50 of perhaps 100 officers being cut from patrols.

“Right now we’re locked into a framework that was set back in the 1960s when we had a different police department and a different community, and we need to make our department more consistent with the reality we have today,” Isom said in an interview Wednesday.

He revealed the plan earlier in the day at an aldermanic committee hearing.

Isom first would like to combine the Fifth and Eighth districts, to the north and northwest of downtown. He said the population and calls for service there have fallen drastically but the allocation of commanders and officers has not.

He also plans to move about 30 officers to the street from various desk positions within the department — such as the property custody unit — and eliminate 30 to 50 positions from the rank of sergeant and above through redistricting.

He plans to complete the process by the end of the year.

Each district has one captain, four or five lieutenants and 15 to 17 sergeants. Cutting to perhaps six districts would require less brass. Isom said he would like to keep the ratio of officers to sergeants, the field supervisors, under 10-to-1.

“If you have a district where you only need 50 officers to serve the population and merge that with a similar community of 50 officers, you now have 100 officers,” he said. “And with more flexibility in command, there will be more officers to respond.”

Isom plans to formally present his plans to the Board of Police Commissioners next week. His recommendations will include:

• Forming a focus group of department members, citizens, elected officials and business owners to develop a plan for eliminating districts.

• Merging the Fifth and Eighth districts, but retaining the assigned captains.

• Relocating the Fifth District headquarters to the North Patrol station and the Seventh District to Central Patrol, for better logistics.

• Placing a moratorium on promotions, since consolidations would create a surplus of 30 to 50 sergeants.

Isom has faced criticism from the St. Louis Police Officers’ Association about a top-heavy administration since announcing that the force of about 1,300 officers would shed 80 through attrition during the next two years because of budget constraints.

Isom said Wednesday the number will be closer to 100, with the expiration in the next fiscal year of a grant that funds 20 officers’ salaries.

The police association’s president, Sgt. David Bonenberger, said the department has lost about 265 officers through attrition — but not many commanders — since he joined 18 years ago.

“I think the chief might be on to something here,” Bonenberger said. “This is long overdue from the perspective that we’ve reduced manpower on the streets, but haven’t reduced our command ranks to absorb that attrition.”

Jeff Roorda, business manager for the association, said Isom’s plan of trimming commanders in favor of lesser-paid street officers might save enough money to thaw sergeants’ frozen pay. But Isom insisted that such savings would be minimal.

The chief said that for months his staff has studied how comparable departments deploy their resources, and compiled a historical synopsis of the city’s police districts.

A 2009 study of 10 departments by the Nashville police put St. Louis second in officers per capita and per violent crime calls. St. Louis ranked sixth in clearing cases through arrests.

Isom said that study was done at a time when vehicle larcenies — which have a low rate of arrest — were “exploding” here. He insisted his force fares much better in solving crimes against people.

Aldermen got their first peek at the proposal when Isom testified Wednesday in front of the Ways & Means Committee. The police department is run by a state board but funded by the city, so aldermen have the power to cut or suggest additions to its budget.

Some aldermen worried about the implications of losing 80 or more officers.

“The idea of losing that many cops is scaring the heck out of folks,” said Alderman Antonio French, pointing out wards with high crime. “One less car could really have a devastating effect over there.”

Isom said he doesn’t believe that better policing necessarily means more officers. Each community within the city has unique issues, he said.

“We probably have the officers we need,” he said. “If not a little bit more.”

City police officers believe in-car cameras are being used against them, and they are trying to find ways to avoid driving cars equipped with them.