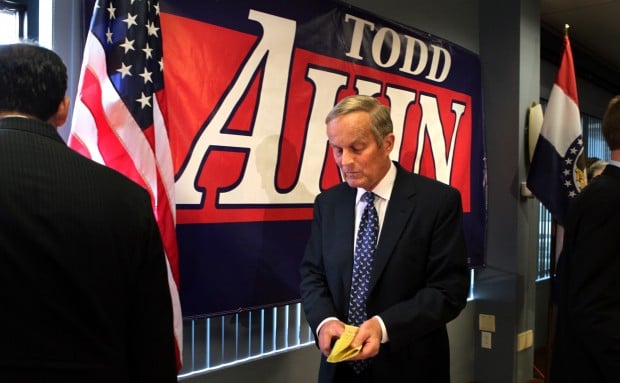 U.S. Rep. Todd Akin leaves a Chesterfield news conference Friday, Aug 24, 2012 where he announced his plans to stay in the race for U.S. Senate. Photo by Robert Cohen, rcohen@post-dispatch.com 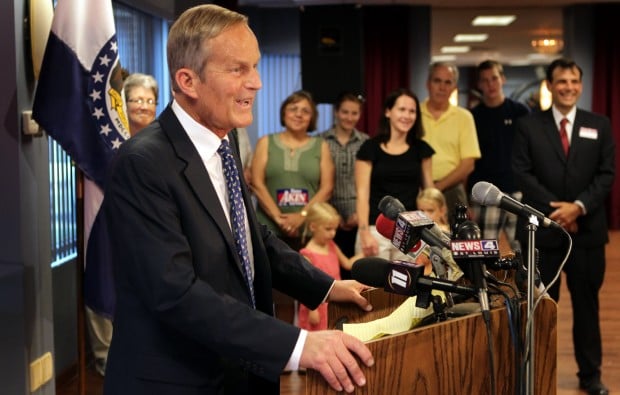 U.S. Rep. Todd Akin speaks at a Chesterfield news conference Friday, Aug 24, 2012 where he announced his plans to stay in the race for U.S. Senate. Photo by Robert Cohen, rcohen@post-dispatch.com

U.S. Senate challenger Todd Akin's support in Missouri has plummeted since his remarks a week ago about "legitimate rape" and pregnancy, putting him 9 points behind Sen. Claire McCaskill in a race he was previously winning, according to a new Post-Dispatch/News 4 poll.

More than half of Missouri voters now view the Republican congressman unfavorably, the poll indicates, and fewer than one in five view him favorably.

Akin's fall is especially dramatic among women. They were about evenly split between Akin and McCaskill in a similar poll at the end of July, but women now oppose him by almost 20 percentage points. Even in rural areas where Akin retains the lead, his support has dropped significantly from a month ago.

"I was undecided ... Now I'm not supportive of him," said Bonnie Walker, 75, of Queen City, who was one of the poll respondents. "It's such a negative for Missouri."

Akin, long a staunch opponent of abortion rights, was comfortably leading McCaskill, the incumbent Democrat, before the recent controversy. A Post-Dispatch/News 4 poll in July, before the Republican primary, showed Akin ahead of McCaskill by 5 points in a hypothetical matchup, 49-44.

But last Sunday, Akin told a St. Louis television interviewer that it wasn't necessary to make rape exceptions to anti-abortion laws because in cases of "legitimate" rape, the female body will naturally 'shut that whole thing down" to prevent pregnancy.

The resulting controversy has turned Akin into a household name across America, with national political implications. McCaskill was previously considered the most vulnerable Democrat in the Senate and a linchpin in the GOP's takeover plans. That's now far from certain.

"I've seen plenty of challengers nine points down come back and win, but not with this many obstacles," including loss of party support and funding nationally, said pollster J. Brad Coker of Mason-Dixon Polling & Research Inc. of Washington, which conducted the poll for the Post-Dispatch and KMOV-TV. "It's not a rosy picture."

Akin's collapse is likely to further complicate a race already tangled in some complex politics, with some Democrats defending Akin's right to stay on the ballot and many Republicans trying to hound him off it.

There were indications that the poll respondents who identify with one of the two major parties understand the upside-down dynamics of the race. Among Democrats, more say Akin should stay in the race than say he should leave; among Republicans, more want him gone.

"I think he should not drop out of the race," said a Democratic poll respondent Weldon Cox, 87, of an unincorporated area St. Louis County. "He won (the GOP) primary fair and square. Let the democratic process rule."

Cox admitted his view was affected by the notion that Akin "will be the easiest to beat" for McCaskill. He added that such a victory could salvage Missouri's reputation. "This is making Missouri look pretty bad. I'm frankly embarrassed, even ashamed."

Independent voters said by a more than 2-to-1 ratio that Akin should leave the race. And they flipped from supporting Akin by a 5-4 ratio in July to supporting McCaskill by a similar ratio last week.

Akin's favorability rating in a Mason-Dixon poll conducted in July was double his unfavorable rating, 24-11 percent. More than 40 percent of respondents at that time held a neutral view of him, and 23 percent didn't know who he was.

The new poll has Akin's favorable-unfavorable numbers at a dismal 17 to 56 percent. An additional 24 percent held a neutral view, while only 3 percent say they don't know who he is.

But the data also show that Akin has kept majority support in rural Missouri, where he still beats McCaskill with 50 percent or more of the vote. But in those same regions in the July poll, his support was around 60 percent.

In the St. Louis and Kansas City areas, where Akin lagged McCaskill by around 5 to 15 points a month ago, almost two-thirds of voters are now against him.

That, combined with national GOP vows to withhold millions of dollars in financial support that would otherwise have been coming Akin's way, makes his path to victory especially narrow, Coker said.

"Grass-roots fundraising in a U.S. Senate race doesn't cut it," Coker said. "For McCaskill, the resources are going to pour in (nationally). This is a Senate seat Democrats can save that they weren't sure about" before Akin's remarks.

Akin said in the original television interview that rape-induced pregnancy is "really rare." By way of explaining his opposition to abortion rights even in cases of rape, he said: "If it's a legitimate rape, the female body has ways to try to shut that whole thing down" to prevent pregnancy.

There's no mainstream medical support for that assertion, but it has been touted by the anti-abortion movement for years in opposition to rape exceptions to anti-abortion laws.

In the maelstrom of national political condemnation that followed, Akin has apologized several times and admitted he was "medically wrong" on the issue. But he has vowed to remain on the ballot, even as GOP presidential nominee Mitt Romney and others press him to leave.

Even some poll respondents who say they still support Akin do so with reservations. "I'll vote for him if he's still on the ballot," said Republican poll respondent Amber Stiber, 58, a stylist from Poplar Bluff. "I'm not saying (Akin's comments) don't bother me, but it's not going to keep me from voting for him" because of her opposition to McCaskill.

Akin has until Sept. 25 to petition a court to get his name off the ballot in time to allow state GOP leaders to name a replacement. He has maintained publicly that he has no intention of doing that, despite the heavy pressure from his fellow Republicans.

The new poll was conducted Wednesday and Thursday, with 625 registered Missouri voters interviewed statewide by phone. All stated they were likely to vote in the November general election. The poll has a margin for error of plus or minus 4 percentage points.

The poll results echo a Rasmussen poll released Thursday that showed Akin 10 points down. Democratic Party officials last week tried to discredit that poll, for fear that such a precipitous drop by Akin would prompt him to leave the race, which in turn would allow Republicans to replace him on the ballot.

"Everyone knows that Rasmussen is a tool of the Republican establishment in Washington," alleged Democratic Senatorial Campaign Committee press secretary Shripal Shah in a comment to The Hill, a Washington publication.

McCaskill — who recently turned 59 — posted on Twitter last week: "Rasmussen poll made me laugh out loud. If anyone believes that, I just turned 29. Sneaky stuff."

An earlier poll, taken by Public Policy Polling the day after Akin's remarks went public, showed Akin with a one-point lead. That poll prompted a similar pushback from Republicans, who disparaged it as attempt by a liberal-leaning pollster to prop up Akin so McCaskill would keep a weakened opponent.

Coker, the Mason-Dixon pollster, said the fact that the PPP poll was taken "right after the bomb went off" on the controversy likely skewed those results. "I don't think the full effect had percolated through yet."

McCaskill's approval gap has closed in the new poll, but she's still "upside-down," meaning more respondents disapprove than approve of her.

The new poll suggests that the Akin controversy hasn't significantly hurt Romney's support in Missouri. Romney currently leads Obama by 7 points, 50-43. The spread in the July poll was for Romney by 9 points, 51-42.

Stands by his no-exceptions opposition to abortion, and vows to stay in.

U.S. Rep. Todd Akin told leaders of his own party that Missouri's U.S. Senate race is "an election, not a selection."

Rex Elsass is a national media strategist who remained loyal to his client as everyone else seemed to flee.

Akin digs in as new poll shows McCaskill with lead

A poll released by a Republican-leaning group shows Claire McCaskill with a 10-point lead over Todd Akin.

U.S. Rep. Todd Akin leaves a Chesterfield news conference Friday, Aug 24, 2012 where he announced his plans to stay in the race for U.S. Senate. Photo by Robert Cohen, rcohen@post-dispatch.com

U.S. Rep. Todd Akin speaks at a Chesterfield news conference Friday, Aug 24, 2012 where he announced his plans to stay in the race for U.S. Senate. Photo by Robert Cohen, rcohen@post-dispatch.com