JEFFERSON CITY — A U.S. Postal Service official late last month warned Missouri Secretary of State Jay Ashcroft that the service might not be able to return all mail-in ballots to election authorities by the Nov. 3 election, a delay that would render late ballots invalid.

In a letter dated July 31, Thomas Marshall, general counsel and executive vice president of the Postal Service, said “certain deadlines for requesting and casting mail-in ballots may be incongruous with the Postal Service’s delivery standards.

“This mismatch creates a risk that some ballots requested near the deadline under state law will not be returned by mail in time to be counted under your laws as we understand them,” Marshall said.

In the August primary, nearly 1,000 ballots arrived too late to be counted in St. Louis, St. Louis County and Jefferson County, election officials said this week.

Marshall issued the letter amid nationwide debate over the politicization of voting by mail and concerns that votes may not count in November’s general election.

On Thursday, President Donald Trump frankly acknowledged that he’s starving the U.S. Postal Service of money to make it harder to process an expected surge of mail-in ballots, which he worries could cost him reelection.

Under Missouri law, election authorities need to receive a mail-in ballot by 7 p.m. on Election Day for it to be counted.

“(W)e recommend that voters who choose to mail their ballots do so no later than Tuesday, October 27,” Marshall said in the July letter.

State law allows voters to request a ballot as late as Oct. 21, said Maura Browning, spokeswoman for the secretary of state’s office.

She said Ashcroft in 2018 pushed to change Missouri law, which had allowed ballot requests until six days before an election. She said this would have exacerbated concerns about late ballots this year.

Still, even by pushing the deadline for requesting ballots back a week, by the time the election authority sends the voter a ballot, there may not be adequate time for the voter to complete the ballot and return it, Marshall said.

“If a voter submits a request at or near that ballot-request deadline, and the ballot is transmitted to that voter by mail 3 business days later, there is a significant risk that the voter will not have sufficient time to complete and mail the completed ballot back to the election official,” Marshall wrote.

Marshall recommended election authorities use first-class mail to send ballots to voters, which generally takes two to five business days to deliver, instead of domestic marketing mail, which can take as long as 10 days to deliver.

In response, the Pennsylvania Department of State asked the state Supreme Court to order election authorities to count mail-in ballots received up to three days after Election Day, the newspaper reported.

Ashcroft, a Republican, has not responded to the U.S. Postal Service’s letter, Browning said.

In Illinois, as long as the absentee or mail-in ballot is postmarked by election day and received within 14 days, it will be accepted.

Browning, with the Missouri secretary of state, said that in the 2018 general election, voters submitted 219,436 absentee ballots statewide.

Browning said nearly half of the rejected ballots — 2,233 ballots — were not counted because they were received late.

In the Aug. 4 primary, absentee and mail-in ballots made up one-third of all votes in St. Louis County, county election officials said.

Eric Fey, the Democratic director of the county election board, expressed concern last week that about 50 August ballots arrived after primary day and had been mailed more than a week earlier.

Rick Stream, the Republican election director in St. Louis County, said in an email Monday that in total, 550 ballots arrived after the polls closed on Aug. 4, meaning that under Missouri law, those votes weren’t counted.

St. Charles County Election Director Kurt Bahr said that 146 ballots arrived too late, but said that number was not up "sigificantly," given the larger volume of absentee ballots that had been requested.

Jeannie Goff, chief of staff for the Jefferson County Clerk’s office, said that a total of 91 ballots arrived late, including 61 absentee ballots, 2 mail-in ballots and 28 ballots in the so-called “at risk” category of those who either have coronavirus or are at a higher risk of contracting it.

Goff said election officials mailed out twice the number of ballots as they did for the 2016 primary, but many people said they did not receive them. She said some married couples who both requested ballots received only one, and the slowest ballot took 18 days to arrive at a voter’s home.

Gary Stoff, Republican director of elections in St. Louis city, said that 419 ballots arrived too late there. Stoff estimated that number is higher than normal, as the election authority received requests for about 12,000 ballots, about two to three times normal.

Asked if he had concerns about November, Stoff said, “The issue is not going to be us getting them out.” He said the problem would be getting them delivered and returned.

“And so we’re encouraging anyone who applies for an absentee ballot to do so early,” Stoff said, and return it as quickly as possible. He said ballots would not be mailed out until about six weeks before the general election.

Rebecca “Becky” Livingston, president of the St. Louis Gateway District of the American Postal Workers Union, told the Post-Dispatch that she was confident that ballots are a “priority” for postal workers and are handled quickly. She also said that the Postal Service will be able to handle the November election.

“There’s always ballots (delayed) because folks didn’t get in the mail stream in time to be processed,” she said.

Livingston said that there have been delays of a day or two for packages due to a higher volume of online shopping amid the pandemic. She did say the mail is being processed differently than a month ago.

Livingston said overtime has been curtailed. Postal carriers who called in sick once had their routes covered by others working overtime. Now, union members say that mail has to wait until the carrier returns.

Livingston said that 175 St. Louis area postal employees have contracted COVID-19, and one died as recently as Sunday.

Union members say some tractor-trailers full of mail now sometimes wait hours or overnight before being sent out.

Even the union offices are now getting mail six hours later in the day, she said. 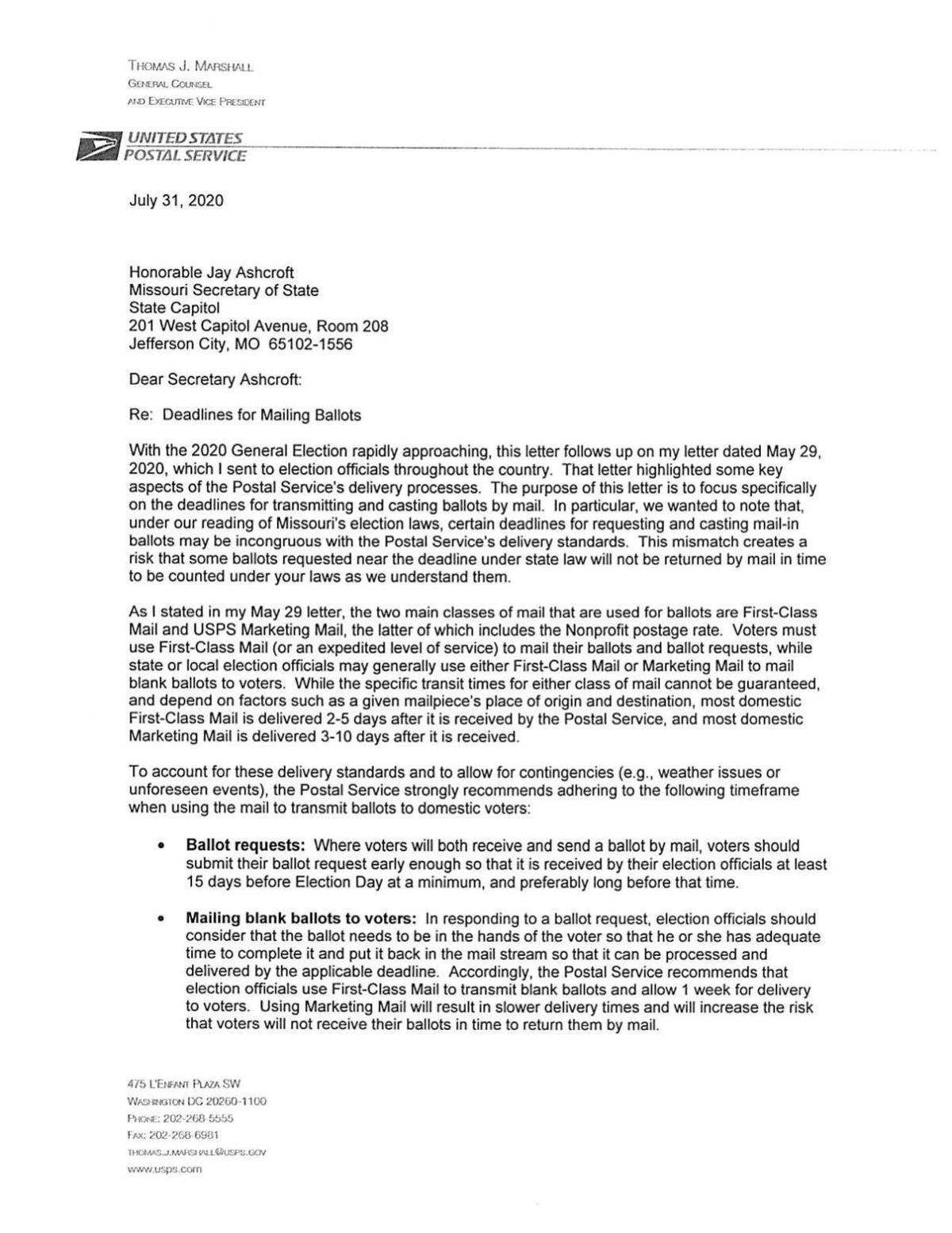 The president of the local mail handlers union told CNN that postal management has already taken out several machines across Kansas and Missouri.