Prop A and Prop B have strong support, poll finds
0 comments
Share this
{{featured_button_text}}
1 of 2 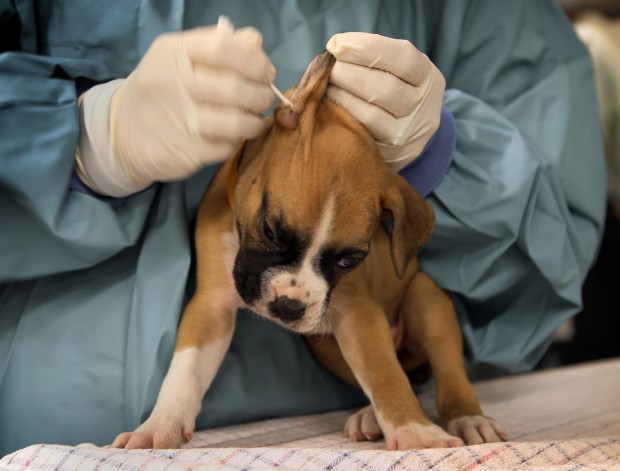 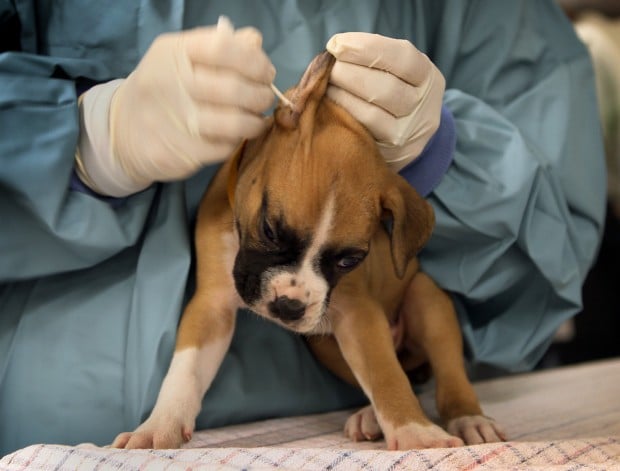 A boxer puppy is examined at the Humane Society of Missouri after several dogs were rescued from a commercial breeder last year. J.B. Forbes - jforbes@post-dispatch.com
BY JAKE WAGMAN • > 314-340-

ST. LOUIS • Two initiatives on the statewide Nov. 2 ballot - one that tugs at the heartstrings, the other at the purse strings - have broad support among Missouri voters, according to a new Post-Dispatch-KMOV-TV (Channel 4) poll.

Proposition A, which could lead to eliminating a 1-percent tax on earnings in Kansas City and St. Louis, had the support of 59 percent of voters polled. Proposition B, which would impose new regulations on dog breeders, displayed even more backing, with 69 percent of respondents saying they would vote for it.

The poll, of 625 registered Missouri voters, has a margin of error of 4 percentage points.

The results show that the millions of dollars spent by proponents of both ballot questions have succeeded in making them a virtual lock - not that eliminating taxes and protecting puppies are an especially hard sell.

"I love dogs. I have a Maltese sitting right here by me," poll respondent Susie A. Davis of Velda City said in an interview. "They need to control the puppy mills."

Missouri has more licensed dog breeders than any other state. Supporters of Proposition B argue that so-called "puppy mills" mass-produce dogs under inhumane conditions. The ballot initiative would establish new regulations for providing food, veterinary care and exercise to dogs at breeding facilities, as well as prohibit stacked cages and wired flooring.

The Proposition B campaign committee, Missourians for the Protection of Dogs, has raised more than $3.5 million from agencies such as the Humane Society, as well as wealthy animal advocates from around the U.S. Last week, the wife of the co-founder of Google, who lives in California, donated $100,000.

The underfunded opposition claims the measure constitutes a slippery slope that could threaten other forms of agriculture - an argument that has resonated in some rural parts of the state.

"If they get this done, the next thing they'll tell us out here in the Hinterlands is how many cows to have," said poll respondent Harold Yeager, 80, of Pettis County.

Proposition A had less bipartisan support in the poll. Only four in 10 Democrats polled said they would vote for it, while two-thirds of Republicans and independents supported the measure.

The campaign for Proposition A has been funded almost entirely by retired financier Rex Sinquefield, a free market advocate who has attempted to use his fortune to shape state policy on taxes and education.

If approved, the measure would trigger a second election in Kansas City and St. Louis, where voters could chose to phase out the 1 percent wage tax paid by all those who live or work in either city.

Even without Sinquefield's cash - he has donated more than $10 million from his personal finances - the current economic conditions may have made the proposal ripe for passage. And the campaign's central pitch - that voters should be able to decide whether to keep the tax - appeared to strike a chord with poll respondents.

St. Louis officials have warned that rescinding the earnings tax without finding a viable replacement could be catastrophic for the already cash-strapped city. The earnings tax brings in roughly $140 million a year, or one-third of the city's general fund budget.

Poll respondent Bill Mauk, a Web designer from Ellisville, opposes Proposition A. Taxes, he said, are the cost of "remaining a society."

"That means we have to give people the authority to spend money," Mauk, 65, said. "They've got to tax us."

New poll indicates Democrat has been unable to pick up ground in Senate race.

Neither Susan Montee nor Tom Schweich is a well-known name as far as Missouri voters are concerned. They have one week — and roughly equal amounts of campaign cash — to change that.

City officials to rally at Kiener against earnings tax measure

ST. LOUIS -- Clergy members will join city officials this evening to rally against Proposition A, the statewide ballot measure that could lead…

Old foes square off over issue of puppies in Mo.

Animal rights groups, led by the Humane Society of the United States, are pitted against agricultural interests -- old foes who have recently done battle in many states over the welfare of farm animals.

A boxer puppy is examined at the Humane Society of Missouri after several dogs were rescued from a commercial breeder last year. J.B. Forbes - jforbes@post-dispatch.com
© Copyright 2021 STLtoday.com, 901 N. 10th St. St. Louis, MO | Terms of Use | Privacy Policy
Powered by BLOX Content Management System from TownNews.com.
You don't have any notifications.