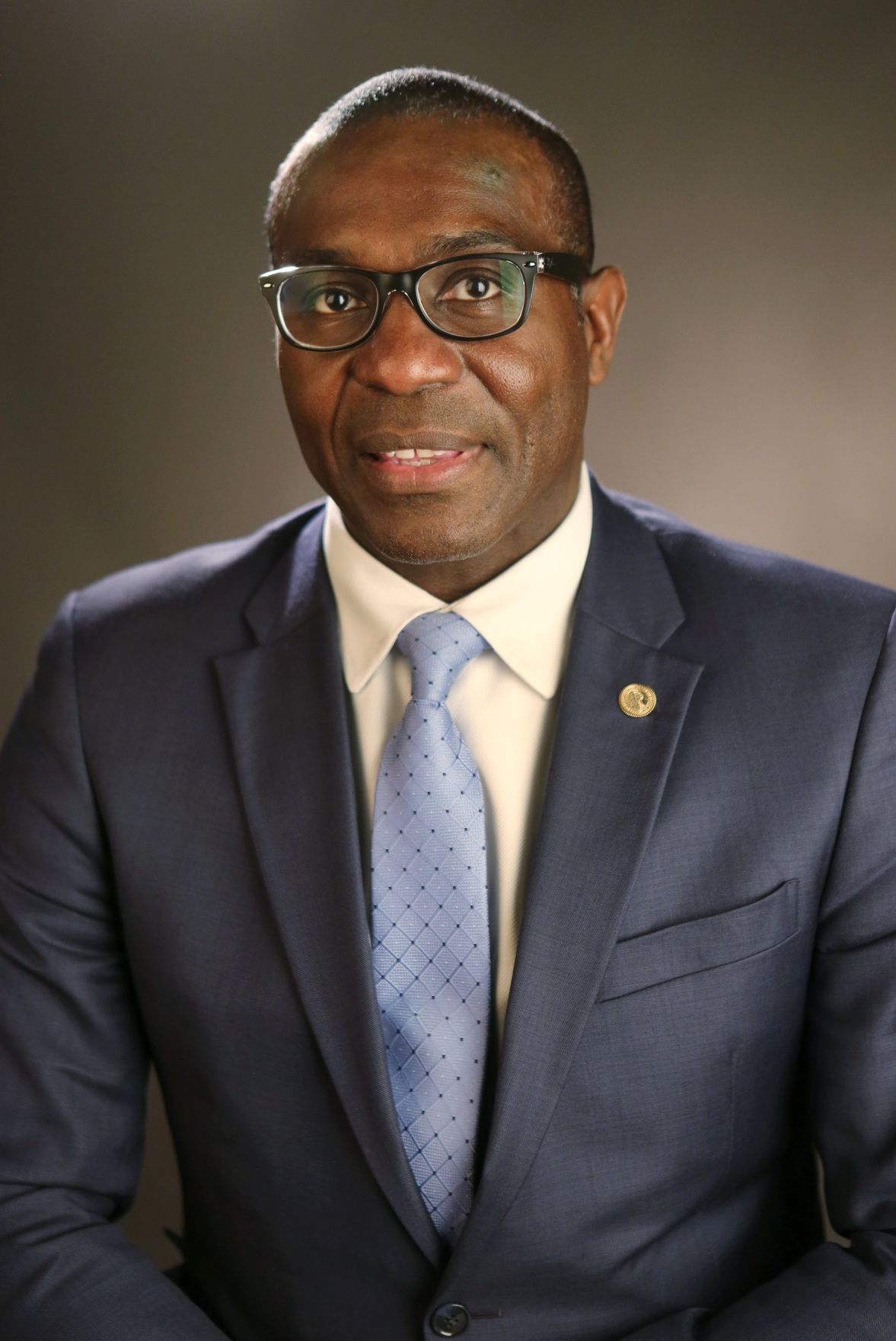 Mayoral candidate Lewis Reed poses for a photo on Thursday, Feb. 9, 2017, in the studio of the St. Louis Post-Dispatch. Photo by J.B. Forbes, jforbes@post-dispatch.com 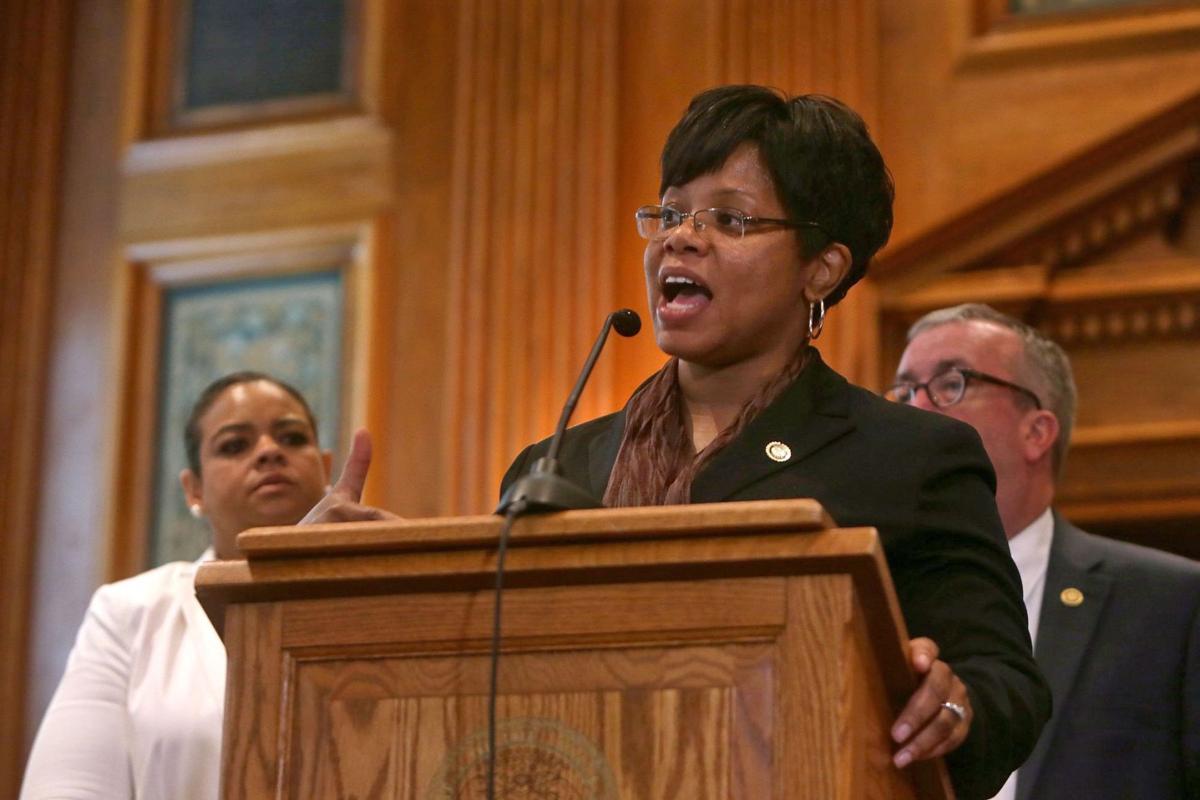 Missouri State Sen. Jamilah Nasheed, D-St. Louis, speaks at a press conference at the Capitol after the conclusion of the Senate on Friday, May 15, 2015. Photo by Cristina Fletes-Boutte, cfletes-boutte@post-dispatch.com

ST. LOUIS • Alderman Megan Green announced on Tuesday that she will run to become the president of the St. Louis Board of Aldermen in 2019, setting up a primary race that will include incumbent President Lewis Reed and state Sen. Jamilah Nasheed, who says she will formally declare her own bid in the coming weeks.

Reed was elected in 2007 and is the city's first elected black aldermanic president. He has held the position for three consecutive terms.

Green, one of the most progressive members of the Board of Aldermen, argues that it’s time for a change in leadership. Since being elected to represent the 15th Ward in 2014, Green has been a vocal critic of tax incentives and has argued the city spends too much on public safety, at the expense of social services.

“I’ve been the underdog in every race I’ve been in. But St. Louis is a much more progressive city than our elected officials reflect,” said Green, who represents neighborhoods that include Tower Grove South and Tower Grove Heights.

She vowed to run a grassroots campaign for aldermanic president, without a reliance on corporate money. Her top priorities if elected would be making City Hall transparent and reforming the way St. Louis approaches public safety and economic development.

Green contends she’s already played a significant role in driving the legislative agenda at the Board of Aldermen, by introducing bills governing community benefits agreements, marijuana decriminalization and police reform.

“I’ve been leading the conversation at the Board on these issues,” Green said.

”This comes as no surprise,” he said of the challenge in a statement on Tuesday. “I find it a bit hypocritical that someone whose legislative record has consisted mostly of tax abatement deals for developers, who has recently been reported to the Circuit Attorney’s office for violating state law by making a side deal with a developer, and who has voted in favor of mass eminent domain of a north St. Louis neighborhood is running on the platform that she has chosen.

“Introducing legislation that is illegal and will never hold up in court is not bold, it’s a waste of time and tax dollars,” he added. He has sparred with Green recently over her proposal to effectively legalize marijuana in St. Louis, which he argues won’t hold up in court.

Reed and Green, once allies, now have a combative relationship. Tension has simmered between Green and some of her colleagues for more than a year, after she made allegations of bribery in 2016 when an aldermanic committee advanced a plan to finance construction costs for a new football stadium. Federal and local officials found the accusations lacked merit.

Following her allegations, Reed was interviewed KZQZ 1430 AM host Bob Romanik, who made profane comments about Green during the show. Reed later apologized for failing to challenge Romanik during the interview.

“I'm looking forward to a successful re-election and taking my message of creating a stronger, safer and more unified St Louis to the voters. Until then, I’ll continue working with people who are more interested in the progress of our city than in masquerades of self-promotion for personal political gain,” Reed said.

Nasheed confirmed Tuesday that she will also be throwing her hat in the ring, saying that after nearly a decade in state government, she wants to serve at the local level. She was elected to the Missouri House of Representatives in 2006, and to the Missouri Senate in 2012.

“Our city has never been this polarized, not in my ten years in politics,” she said.

Her top priorities would be bringing equal resources to North and South St. Louis and tackling the city’s high crime rates.

“I want people to feel safe here,” she said.

The relationships she’s built in Jefferson City will be an advantage she has in the race over Reed and Green, she said, citing efforts at the statehouse to improve education, reduce incarceration and end human trafficking.

Nasheed was also one of the Democrats fighting to keep the GOP-led Legislature from overriding the city’s minimum wage increase last year.

St. Louis County announced it would be enforcing its indoor mask rule and hired monitors to hand out masks.

The Charter Commission couldn’t agree last year on bigger changes to the county government last year. The most meaningful change, for many, may be the removal of gender-specific pronouns.

Two billboards outside Lake of the Ozarks lead to ethics woes

The bars and restaurants have been ordered to close after being accused by St. Louis officials of violating health guidelines.

Mayoral candidate Lewis Reed poses for a photo on Thursday, Feb. 9, 2017, in the studio of the St. Louis Post-Dispatch. Photo by J.B. Forbes, jforbes@post-dispatch.com

Missouri State Sen. Jamilah Nasheed, D-St. Louis, speaks at a press conference at the Capitol after the conclusion of the Senate on Friday, May 15, 2015. Photo by Cristina Fletes-Boutte, cfletes-boutte@post-dispatch.com 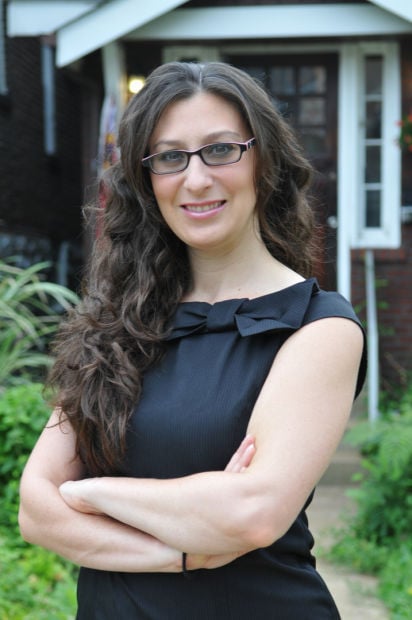