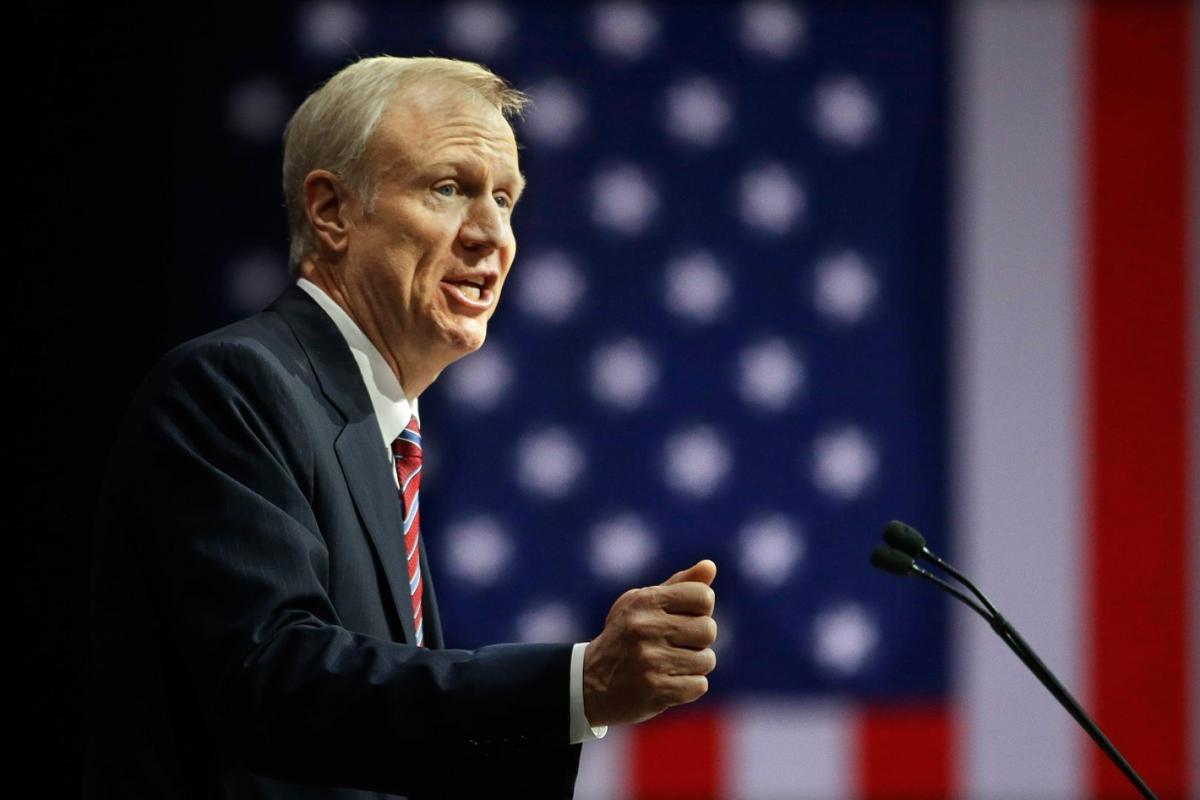 Bruce Rauner speaks to the crowd of supporters after taking the oath of office as Illinois' 42nd governor, Monday, Jan. 12, 2015, in Springfield Ill. (AP Photo/Seth Perlman) 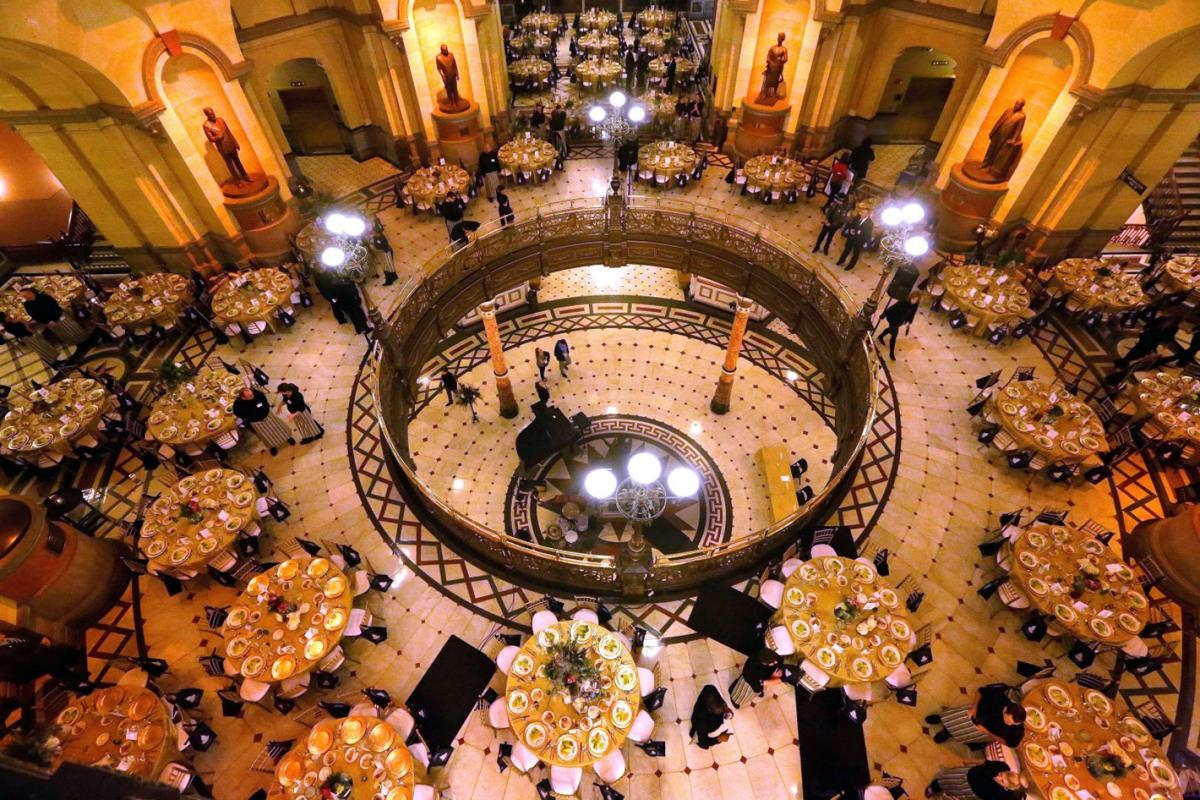 Illinois Gov. Bruce Rauner took office last month presenting himself as a steely-eyed CEO who would cut wasteful spending and break with the state’s long, seedy tradition of patronage politics and insider deals.

“I will send a clear signal to everyone in our state, and to those watching from outside our borders, that business as usual is over,” Rauner vowed in his Jan. 12 inaugural speech in Springfield. “It stops now.”

In the five weeks since then, various media reports have found different kinds of signals:

• Rauner’s administration hired the 25-year-old sister of his campaign political director to a $70,000-a-year job at the state EPA.

• The administration hired a six-figure chief of staff for Rauner’s wife, who, as first lady, has no official duties.

• Rauner granted a no-bid state consulting contract to the firm of his hand-picked state financial adviser for $120,000 for four months’ work.

• The salaries of the people Rauner has installed in top administration positions are significantly higher than their predecessors. They include Rauner’s longtime executive assistant from the private sector, who has come on to the state payroll at a salary of almost twice what her predecessor earned.

Is Illinois’ new businessman-governor already turning out to be business as usual?

“It’s certainly a symbolism problem,” said David Melton, director of the Illinois Campaign for Political Reform. “He’s saying we need to balance the budget and tighten our belts, and at same time he doesn’t seem to be tightening his.”

His first official act after being sworn in was to freeze new state hiring and all “nonessential” state spending. He has also announced he will forgo his own $179,400 salary as governor, and will instead be paid $1 annually.

None of those things comes as a surprise, after a year’s worth of campaign ads in which Rauner presented himself as a different kind of leader than scandal-wracked Illinois is used to.

But four days after Rauner’s inauguration — where he spoke forcefully about ending Illinois’ tradition of patronage politics — his new administration quietly hired Emily Clamp, 25, to a $70,000 position with the Illinois EPA. Clamp is the younger sister to Sarah Clamp, who was Rauner’s political director in the 2014 campaign.

The younger Clamp’s position, first reported this month by the Lee Enterprises Springfield Bureau, is as a policy adviser at the agency, working on a clean-power plan.

In an emailed response to the Post-Dispatch, Rauner’s office defended the hiring, noting Clamp’s degree from Cornell University in environmental engineering and calling her “well-suited” for the position.

Sarah Clamp, the former Rauner political director, who is 27, also has landed on the state payroll, in a $90,000-a-year job as the governor’s director of special projects.

The questions aren’t just about who Rauner has hired, but what he is paying them.

During the campaign, Rauner virtually declared war on the state’s public-sector unions, largely over what he claims are inflated state employee salaries. He has kept up that stance as governor. On Feb. 2, he issued a memo to legislators claiming that state employee salaries consistently and significantly exceed their private-sector counterparts.

“These levels are unsustainable and unfair to working families, small businesses and other taxpayers in Illinois,” Rauner wrote.

But when the Associated Press last month reviewed the salaries of top officials that Rauner has installed around him, it found that he has granted salaries to most of them that are significantly above those of their predecessors — about 36 percent more, on average.

And, the review found, Rauner’s longtime executive assistant in the private sector, now earning a state salary of $135,000, is making 94 percent more than the salary of a Quinn aide who performed similar duties but earned just $69,500.

Rauner’s office maintained that, even with the individual higher salaries of some top officials, the administration’s “overall payroll” is lower than Quinn’s was.

Rauner himself has defended the higher salaries of the top aides as necessary for “the talent that we’ve got.”

“The people we’re bringing into our administration, most of them are taking significant cuts compared to what they were making on the outside,” Rauner said late last month when reporters asked about the higher salaries.

The American Federation of State, County and Municipal Employees, the union that represents many state workers, sees some irony in Rauner making that argument even as he blasts state workers as being overpaid.

“The governor doesn’t seem to value front-line employees who do the real work of state government,” AFSCME spokesman Anders Lindall said in a written statement.

“He excuses big payouts for political hires by saying he wants ‘top talent’ telling him what to do. We want top talent caring for veterans, protecting kids from abuse, ensuring safe prisons and providing all the other services of state government. ”

Another salary that has raised eyebrows is the $100,000 that Illinois will now be paying for a chief of staff for Rauner’s wife, Diana Rauner. The Illinois first lady doesn’t have any official duties. In fact, the state hasn’t even had a first lady for the past six years under Quinn, a bachelor.

Rauner’s office last week defended the new position in an emailed statement, saying it will help Diana Rauner “work alongside the Governor to improve the state of Illinois.”

“Former Illinois First Lady Brenda Edgar had a chief of staff,” noted the statement — reaching back to the administration of Gov. Jim Edgar, four governors ago.

In February, there was still more controversy, over a four-month, $30,000-per-month contract that the new administration has granted to the consulting firm of Rauner’s hand-picked state chief fiscal officer, Donna Arduin, for state budget work.

Asked to justify spending $120,000 for four months’ work without even taking bids for it, Rauner predicted to reporters recently that Arduin is “going to save us billions” based on her work in other states. His office reiterated that prediction in response to questions from the Post-Dispatch last week.

That repeated rationale — that the administration has to spend extra on top people in order to save money down the road — hasn’t satisfied all the critics.

“There is some understanding by the public that competitive salaries are necessary to draw good people to government,” wrote the Chicago Sun-Times late last month, as the stories were unfolding, “but that doesn’t quite square” with Rauner’s talk of shared sacrifice to address the state’s fiscal problems.

“So then we should expect six-figure salaries to keep rolling in?,” asked the paper. “Or will they too be asked to share in the sacrifice?”

The imagery of patronage hires and inflated executive salaries looks especially bad when “they’re trying to sell people on the need for some dramatic cuts” in other areas of government, said David Yepsen, director of the Paul Simon Public Policy Institute at Southern Illinois University Carbondale.

“The optics of this look bad,” Yepsen said. Even if the higher pay for staff and the rest are justifiable, he said, “they have got to be sensitive to how this stuff looks.”

While none of the well-publicized controversies has proven debilitating to the new administration, there are already signs that they may have cut short the honeymoon that new governors generally enjoy from the voters.

A poll released last week by Chicago-based Ogden & Fry found Rauner with a 43 percent approval rating after one month in office. That’s a 9-point drop from another poll taken in mid-January, right after Rauner assumed office.

Gov. Bruce Rauner's lack of political background and commitment to anti-labor Republican ideology have combined to give him a rocky start in Illinois' highest elected state office. He's attacking state labor unions — and ascending as a contender to be organized labor's public enemy numero uno in the process — criticizing state spending and complaining that state workers' salaries are too high.

Legislative Democrats are poised to drop a $3 billion budget deficit into the lap of the new Republican governor.

Hundreds attend dinner at Capitol ahead of inauguration

SPRINGFIELD, Ill. •  Gov.-elect Bruce Rauner says Illinois is on the verge of a "major transformation."

CHICAGO • Hospital and manufacturing trade groups are among the largest donors to Gov.-Elect Bruce Rauner's transition and inauguration.

Incoming Illinois governor faces all the old problems, plus some new ones

Newcomer Rauner will have to build his administration from scratch.

Rauner grapples with this year, next year's budget problems

SPRINGFIELD, Ill. • Illinois Gov. Bruce Rauner will lay out his plan on Wednesday to confront an unprecedented fiscal crisis exacerbated by th…

Bruce Rauner speaks to the crowd of supporters after taking the oath of office as Illinois' 42nd governor, Monday, Jan. 12, 2015, in Springfield Ill. (AP Photo/Seth Perlman)