JEFFERSON CITY — Republicans plan to target the 24th Senate District in St. Louis County this November, eight years after Democrats flipped the seat as suburban voters began to drift away from the GOP.

Now, with President Joe Biden’s approval rating sagging and consumer prices rising, Republicans believe the district is in play. The race for the 24th could turn into one of Missouri’s most competitive contests this Nov. 8.

A more moderate candidate and a redrawn 24th that stretches south to the Republican-leaning Fenton area could factor into a GOP victory here. Sen. Jill Schupp, a Creve Coeur Democrat who flipped the seat eight years ago, is now term-limited.

“It’s obviously going to be a good year for Republicans,” Senate Majority Leader Caleb Rowden, R-Columbia, told the Post-Dispatch last week. “We’re going to do whatever we can, whenever we can, to help.”

Republicans would expand their two-thirds majority with a win, taking Democrats down to nine seats in the 34-member Senate, if no other districts flip this year.

The only Republican who has reported raising money so far — Hruza, 66, of Huntleigh — said if elected he would focus on increasing school transparency and choice, supporting law enforcement and reining in the state budget — all conventional Republican messages.

But breaking with many in his party, Hruza said Biden won the 2020 election and that he “conditionally” supported the bipartisan gun legislation that was being drafted in the U.S. Senate, calling it a “reasonable” and “pragmatic” approach.

“To me, keeping guns out of the hands of people who are at risk of hurting themselves or others is important,” Hruza said. “The challenge is to have a reasonable due process in place.”

He said he would gravitate toward the Missouri Senate’s “regular Republicans” rather than join the firebrand Conservative Caucus, whose members have openly feuded with other GOP senators.

Compared with the old lines, the new boundaries are more favorable for Republicans. 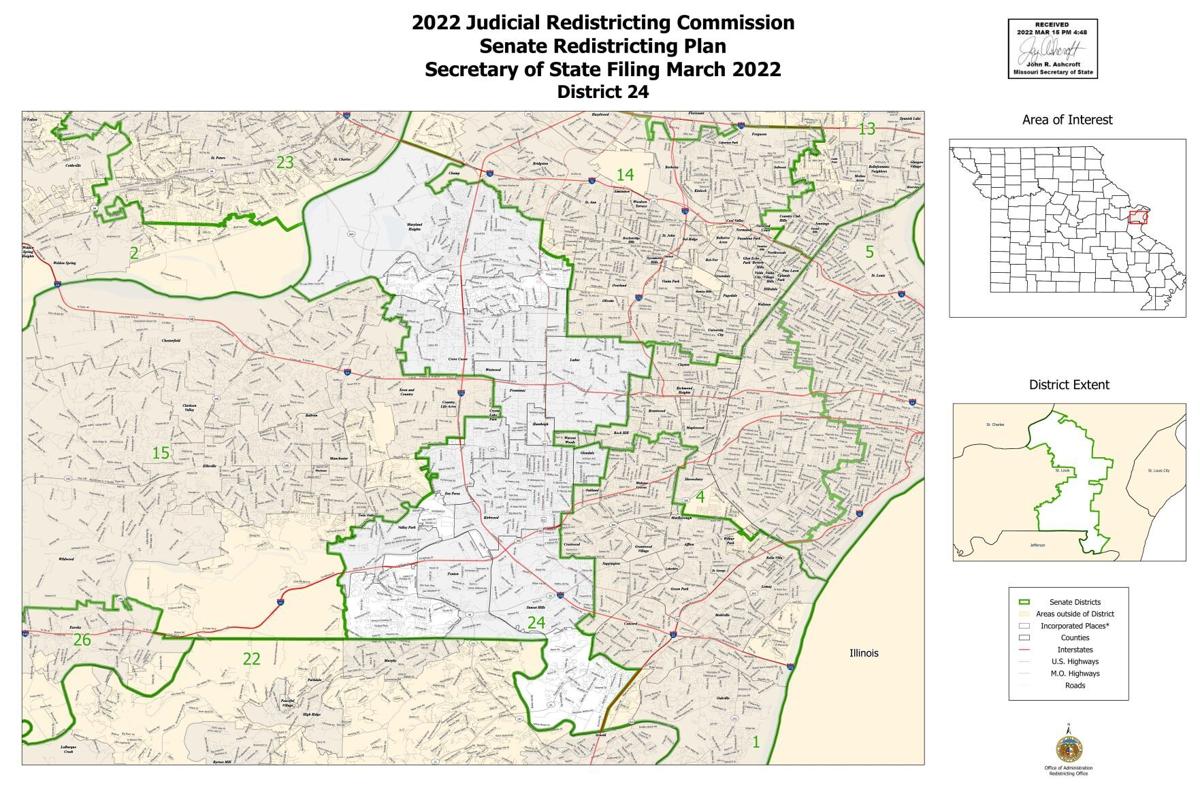 Under the old lines, Democrats typically won 57% of the vote in statewide elections while Republicans won 41%, a 16% advantage for Democrats, according to an analysis in Dave’s Redistricting App.

The party’s edge shrinks to about 7% under the new lines.

“It (the district) has become more competitive from a partisan standpoint. And the district is noted for having a very large number of independent voters,” said John Hancock, a former chair of the Missouri Republican Party who is working for Hruza’s campaign. “When you couple that together with George’s truly unique background, we think the race is very much in play.”

Hruza, a dermatologist, said he left communist Czechoslovakia in 1966 and lived in Sweden before arriving in the United States as a teenager in 1970. He said his mother survived the Holocaust.

McCreery, 55, is the only Democrat running, and at the end of March, she had the most money in the race: nearly $600,000 on hand between her campaign and allied PAC, Serve Missouri.

Schenck, a 57-year-old attorney from Creve Coeur, said he’d “like to raise more” money but said he hadn’t gotten “to that point yet.”

In the Legislature, Schenck said, “it’s very good to have a legal background,” saying it gives one a “better insight into what needs to be done with laws.”

Schenck said he would lean more toward regular Republicans, and not the Conservative Caucus, even though he does have conservative views, he said.

McCreery, in an interview last week, said voters were frustrated with Republican infighting in Jefferson City and were looking for a candidate who would accomplish things.

“Voters are very aware of this hyperpartisan, petty bickering that’s going on,” she said.

McCreery has touted endorsements from the Missouri State Council of Fire Fighters and Lodge 15 of the Eastern Missouri Coalition of Police.

“I’ve made a commitment to trying to do what I can from a public policy standpoint to keep them safe,” McCreery said.

Schupp, the 24th’s outgoing state senator, said McCreery is “well-respected on both sides of the aisle” and “gets things done regardless of who gets the credit.”

“Tracy has robust support throughout the community she currently represents because of her work and outreach over the past nine years,” Schupp said, adding McCreery is fundraising and knocking doors “to meet and hear from people throughout the newly drawn 24th.

“She is exactly the kind of public servant people want,” Schupp said.

McCreery voted for legislation in 2021 to gradually raise the state’s fuel tax and said she wouldn’t speculate whether she would’ve voted for the tax if gas prices were at 2022 levels last year.

McCreery said she voted for the increase because she overwhelmingly heard from constituents that the state’s roads were an “embarrassment” and that infrastructure projects could no longer be neglected.

Asked how the state could help lower costs for families, McCreery said she was proud of her work to make sure utility companies “can’t just carelessly, recklessly have permission to continue to raise folks’ utility bills. And that really matters in a time like this.”

Hruza said “there is a lot of disquiet and concern about what is happening, and coming out of Washington,” adding he wanted to see what the state could do to “rectify” some of the “really bad things,” including inflation and a “war on fossil fuels.”

Hruza said he wouldn’t have voted for the increase to the state’s fuel tax last year even though he thinks a “user fee” system, in which taxes on gas purchases fund road projects, is the right approach to funding infrastructure improvements.

McCreery said she would defend the state’s Medicaid expansion, which 53% of voters backed in August 2020.

Hruza and Schenck both couldn’t recall how they voted on Medicaid expansion.

Records show Schenck didn’t vote in the August 2020 primary but that Hruza did vote.

Hruza said he’d be in favor of reforming Medicaid so that more physicians participate in the program, resulting in more patient access.

“We have Medicaid expansion here now,” Hruza said. “I think we need to expand the physician-providers that participate in Medicaid.”

Abortions in Missouri: Prohibited, no exceptions for rape or incest

Greitens resigned in disgrace. Here’s why he leads in Missouri’s US Senate race.

Eric Greitens, polls say, has solid support from about one-quarter of Republicans, which could give him the nomination on Aug. 2 in a crowded 21-candidate field.

Her spokesman said the Illinois Republican had intended to say the decision was a victory for a “right to life.”

“I am not looking to be a spoiler. I’m in this race to win it,” Wood told the Post-Dispatch.

Abortions are banned in Missouri, but lawmakers say the fight isn’t over

Officials on both sides of the abortion issue say the fight is not over.

The Supreme Court’s decision will almost certainly divide the St. Louis metro area, a center of abortion access and a region with deep Catholic roots.

The new PAC, funded in part by Rex Sinquefield, has scheduled more than $1 million worth of commercials through the end of June.

A St. Louis County councilman has asked law enforcement to investigate a video of a county employee engaged in a sexual act at the county building.

The check is not in the mail: Parson expected to tank tax rebate plan

More than a third of Missourians would not qualify to receive the tax rebates.

The law would strip funding from localities with high homeless populations that refuse to enforce local ordinances that bar the homeless from public camping and obstructing sidewalks.