Rev. Larry Rice says he will comply with judge's order, close his downtown shelter this weekend
0 comments
Share this
{{featured_button_text}}
1 of 2 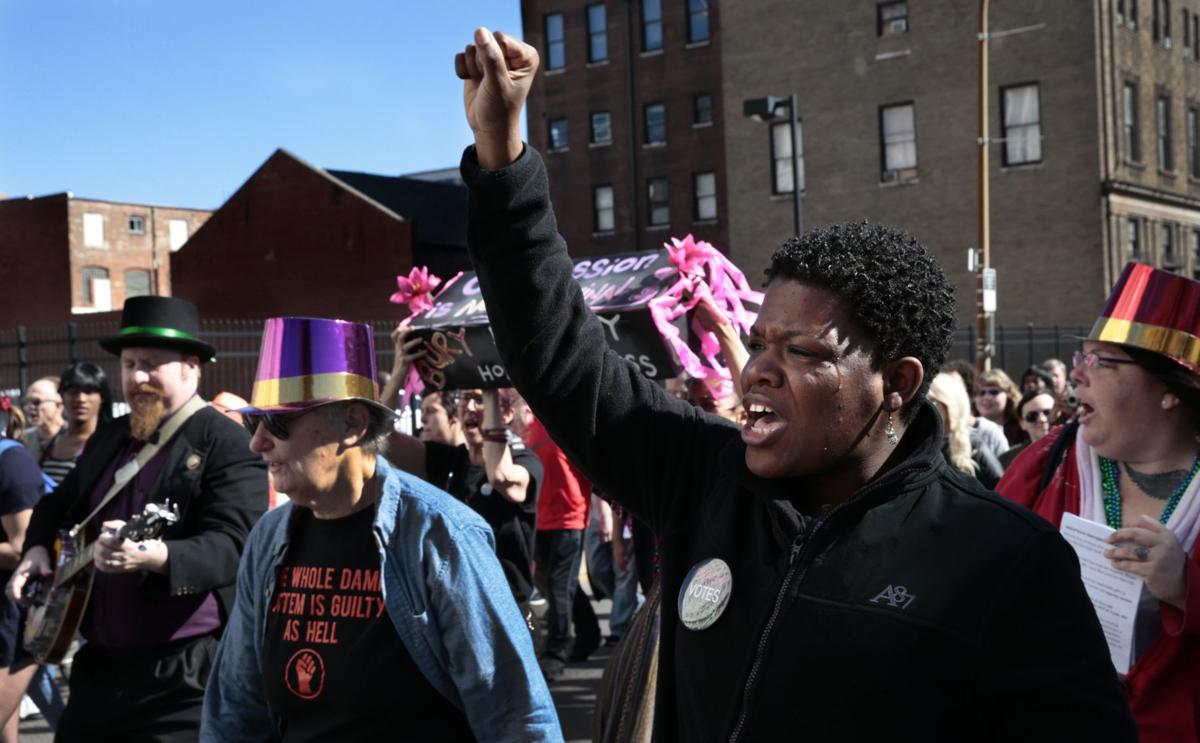 Tears roll down the face of Cori Bush, who marches with protesters voicing opposition to the planned city closure of Rev. Larry Rice's New Life Evangelistic Center, a shelter for the homeless, on Friday, Feb. 17, 2017. "We are fighting our own mayor," said Bush. "When he says there's space other places, we're the ones knocking on doors to see there is none." A city appeals board has given Rice until April 1 to cease operations. Photo by Robert Cohen, rcohen@post-dispatch.com 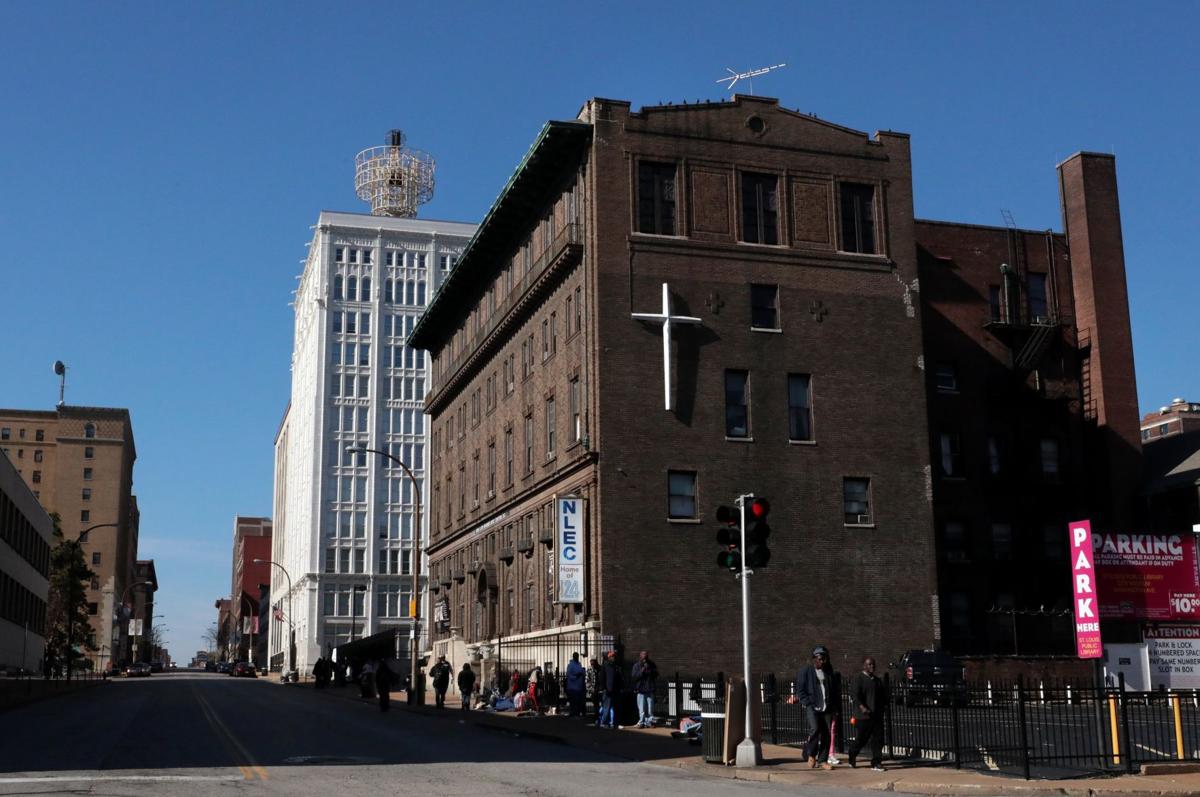 ST. LOUIS • The Rev. Larry Rice said Thursday that he will close his downtown homeless shelter this weekend after a judge earlier in the day refused his request to stay open.

Rice said he notified the city that he will be out of his New Life Evangelistic Center by 5 p.m. Sunday — but not before a “Save the Shelter” rally the day before.

Rice said he anticipates the shelter shutdown will be temporary, as he continues to get the building up to code and drum up support from surrounding neighbors. He also admits the timing will help in his effort to get elected mayor. He is running as an independent candidate on the April 4 ballot.

“People are going to have a wake-up call and think: ‘My God, this could be me,’” Rice told the Post-Dispatch on Thursday afternoon. The city is essentially evicting its most vulnerable residents, he said.

As a result, St. Louis residents are going to wake up with homeless people “in their backyards, in the alleys, everywhere, and the city leaders convincing themselves that they solved the problem,” Rice said.

Rice has been operating his shelter, often referred to as NLEC, without an occupancy permit since May 2015. New Life provides shelter to at least 200 people per night, Rice has said.

On Thursday, he said that number is closer to 150 although he admitted the number of people camping out overnight in front of his shelter has grown exponentially over the past 90 days, which has been a source of numerous complaints from nearby residents and businesses.

He said the increased numbers came from the homeless being booted from other places, as the city continues to gentrify and ignore basic services. He denied assertions made by some nearby residents that he was using his TV station to encourage homeless people to gather at his shelter as retaliation for efforts to try to shut him down.

The permit Rice had been operating under allowed him to provide shelter for up to 35 people per night.

The city revoked the permit due to chronic overoccupancy and because of a series of building codes violations, including missing plumbing and improper exhaust for the kitchen. The center has also been cited for having bed bugs. Rice said he has attempted to fix problems in the building only to have city inspectors come back with a list of other issues, preventing him from ever being in compliance.

Rice continued to operate without a valid permit, leading to the city issuing a “cease and desist” order in November. Two months later, the Board of Building Appeals voted 7-0 to uphold that decision and gave New Life until this weekend to shut down operations. Rice, in turn, challenged the city’s decision in court calling it a violation of the shelter’s First Amendment right to operate a religious institution.

Circuit Judge Joan Moriarty on Thursday sided with the city and denied Rice’s shelter permission to remain open. Rice, who has long been at odds with City Hall over the operation of his center at 14th and Locust streets, said he will not appeal the decision because time is running out. But Sunday night, he will be sleeping on the sidewalk with all those who no longer have a place to stay, he said.

City leaders have said repeatedly that they will be able to provide shelter for those who have been staying at Rice’s center, although there could be a small gap between when Rice closes and when they get new shelter spaces up and running.

In a March 22 vote, the Affordable Housing Commission approved $214,000 to open two shelters in the event Rice’s center was shuttered. Each could house 75 people.

City leaders said Thursday that the 12th and Park Recreation Center, which has been used as an overnight emergency shelter during the winter, will become available to homeless women. Meanwhile, a storage facility near the city’s new Biddle Housing Opportunities Center, at 1212 North Tucker Boulevard, will be available to house men.

The Biddle location will be used as a processing center to assist those leaving the New Life shelter, according to the city.

Rice said he received a letter from City Counselor Mike Garvin seeking details on Rice’s plans to evacuate the building by Sunday. City leaders gave Rice though Saturday to comply with the order.

Rice said he is waiting until the end of the day Sunday, in order to provide shelter for his clients as long as possible. He said he is also scrambling to find rented space to run his television station and church, also operated out of New Life, as well as administrative office space.

“I want to use every available moment,” Rice said. And ultimately, “I want to get back into the building.”

Eddie Roth, director of human services for the city, said St. Louis has multiple facilities that serve the homeless supplying more than 1,200 beds. Providers of those services, he said, are able to meet the same standards that Rice is being asked to satisfy.

“If NLEC wants to operate a shelter with a greater number of beds, it can work with his neighbors and the homeless service community, apply for a shelter permit, and satisfy the minimum legal requirements relating to occupancy, safety, health and hygiene — just as other faith groups or nonprofits do,” said Roth in a prepared statement.

Rice said that no matter the future of New Life, he will not be selling the building he has been operating out of since 1976.

“Developers have already been expressing interest,” he said. The shelter sits in the city’s loft district.

Rice has been at odds for decades with City Hall, and that is likely to continue as Mayor Francis Slay winds down his four terms in office. His expected replacement, Alderman Lyda Krewson, who won the Democratic nomination this month and has the endorsement of Slay, has come out in favor of closing New Life.

In November, while meeting with residents at the Terra Cotta Lofts, located next door to New Life, Krewson was asked her opinion on the shelter.

“NLEC has to be closed,” Krewson said. “I don’t see another choice.” She said the city should “put a lock on the place” but conceded doing so would create a “big legal battle.”

That legal battle appears to be over, for now. “This is the city’s last walk-in shelter,” Rice said. “Reality is going to hit quick when hospitals, churches and police can’t drop people off here. They still can, but they won’t be able to get into the building.”

Tears roll down the face of Cori Bush, who marches with protesters voicing opposition to the planned city closure of Rev. Larry Rice's New Life Evangelistic Center, a shelter for the homeless, on Friday, Feb. 17, 2017. "We are fighting our own mayor," said Bush. "When he says there's space other places, we're the ones knocking on doors to see there is none." A city appeals board has given Rice until April 1 to cease operations. Photo by Robert Cohen, rcohen@post-dispatch.com