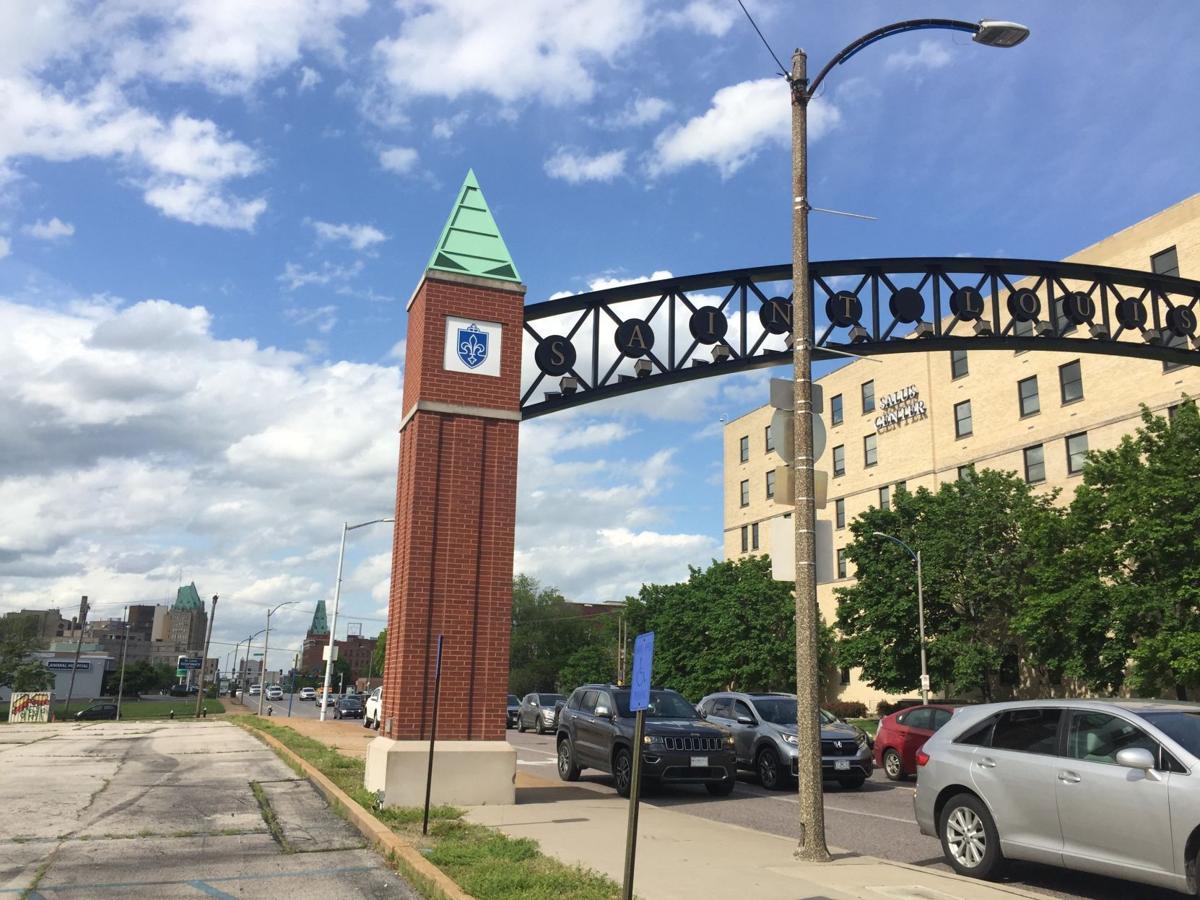 St. Louis University is considering selling a parking lot at the southern entrance to its campus on Grand Boulevard to QuikTrip for the gas station chain's ninth south St. Louis location. The university in 2016 won redevelopment rights in the area so it could guide “signature” projects in the urban core. (Jacob Barker) 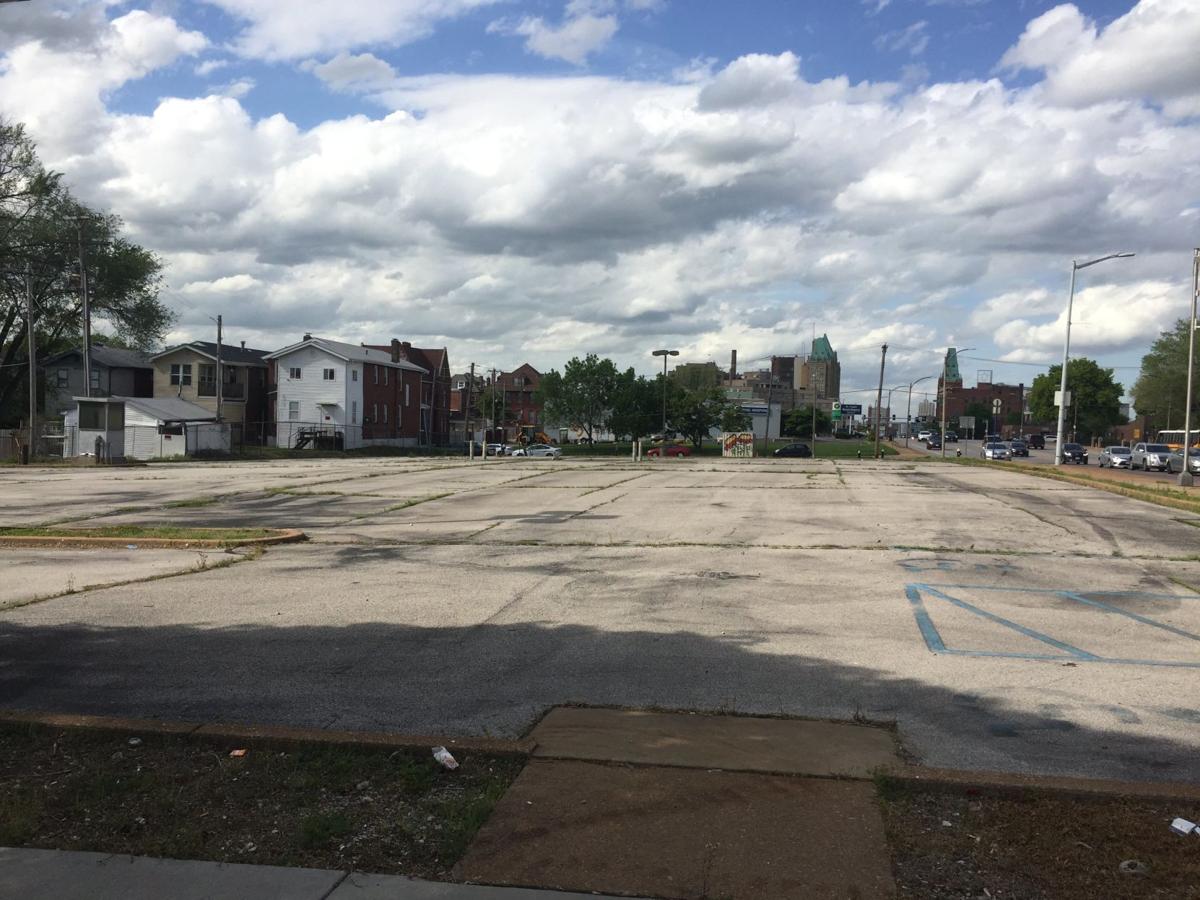 The St. Louis University-owned parking lot on the edge of the Tiffany neighborhood at Grand Boulevard and Interstate 44 where QuikTrip wants to build another location. It has about 60 in the region already. SLU controls a redevelopment corporation meant to guide signature development at key intersections like this one. (Photo by Jacob Barker/Post-Dispatch)

ST. LOUIS — When city aldermen created a redevelopment corporation controlled by St. Louis University and SSM Health in late 2016, the justification was that one of the city’s premier anchor institutions would guide distinctive redevelopment of a swath of the urban core as an influx of investment was poised to roll in.

Among the goals of the St. Louis Midtown Redevelopment Corp. was to “facilitate signature development” at “key locations,” including Grand Boulevard and Interstate 44, the southern entrance to the university’s medical campus.

But the “signature development” that’s under consideration at the SLU-owned parking lot is a QuikTrip — and that has some neighbors worried and local proponents of walkability and urban density fuming.

“Are we building a city for people driving in or for people who live here?” said Richard Bose, the editor of NextSTL, a blog dedicated to St. Louis urbanism. “A redevelopment area where there’s grand hopes? How does a gas station fit into any of those?”

Among the Midtown Redevelopment Corp.’s powers is the ability to offer property tax abatement without city approval. The QuikTrip, if SLU sells its land to the Tulsa, Oklahoma-based company, would be located in an area where the redevelopment corporation can grant up to 25 years of tax abatement. Three members of the five-member board are SLU representatives.

Brooks Goedeker, who heads the redevelopment corporation, said in an email that QuikTrip has not requested an abatement for the property and the company has indicated it has no plans to do so.

He said the redevelopment corporation asked the area’s neighborhood group, the Tiffany Community Association, to work directly with QuikTrip on the possibility of a new location and the Midtown Redevelopment Corp. had no other information to share on the proposal.

Few people wanted to discuss the status of the project. A QuikTrip representative declined to comment. A SLU spokesman said QuikTrip was working with the Tiffany Community Association on the project and referred questions to the company.

Alderman Marlene Davis, who represents the area, said she had no opinion on the project and it would be up to the Tiffany Community Association.

“As I understand it, no decision has been made,” Davis said.

Last week, Denisce Williams, president of the Tiffany Community Association, told the Post-Dispatch she had to talk with her fellow board members before discussing the project with the newspaper. She said Tuesday the organization would not comment on the proposal. “It’s not open for discussion,” she said.

She wouldn’t say how her neighbors felt about the proposal and said no vote had been taken.

But notes from a September Tiffany Community Association meeting obtained by the Post-Dispatch and residents the newspaper interviewed this week indicated there was strong opposition to the project last year.

“There was a pretty firm outcry to it,” said Richard Wilson, who lives on Lafayette Avenue a few doors down from the SLU parking lot.

“Two on Kingshighway. Two on Chouteau. How many QuikTrips they need?” said another man a few doors down who declined to give his name.

QuikTrip operates about 60 locations in the region, including eight in south St. Louis. Six are within 2 miles of the SLU-owned property at the corner of Grand Boulevard and Lafayette Avenue.

Notes from a Sept. 1 meeting of the Tiffany Community Association don’t indicate any neighbors speaking in support of the proposal except for one member of its development subcommittee, who said the QuikTrip development could make safety improvements to the Interstate 44 on-ramp that runs down Lafayette Avenue.

The notes, taken by Jamal Sadrud-Din, do indicate many neighbors expressing concern about noise and additional traffic in the area, as well as the multitude of QuikTrips already nearby. Sadrud-Din did not respond to requests for comment.

Wilson said traffic was one of his main concerns, too. It’s already incredibly busy on that stretch of Lafayette Avenue as cars accelerate to enter the highway.

“I don’t think it’s the best thing to happen for property values,” Wilson said. “It’s just not the best place.”

Ambrose Mueller, whose family has owned the McRee Avenue house abutting the SLU site since the 1940s, said he hasn’t heard from QuikTrip in months.

“I would think you could do a lot more than a QuikTrip,” he said from his porch overlooking the SLU land. “I don’t know why they haven’t done something with it.”

Indeed, the area has seen millions in investment in recent years, including the new $550 million St. Louis University Hospital that opened a half-mile north on Grand Boulevard eight months ago. The Midtown Redevelopment Corp. has also worked on other large developments that have built density in the area, such as new homes in the Gate District neighborhood just to the east, the Steelcote Lofts project and Midas Hospitality’s new Element St. Louis Midtown hotel.

But the QuikTrip proposal has put Mueller in limbo, unsure of whether to keep putting money into his 1890s home or hope to be bought out by the gas station.

“We’re trying to do things to fix the house,” he said. “What house value you do have, it takes away with a gas station right next to it.”

Williams, the neighborhood group president, dismissed the concerns from neighbors, saying the ones the Post-Dispatch spoke with probably didn’t even have a vote in the Tiffany Community Association.

The neighborhood group could have a financial incentive to support the development. The notes say QuikTrip would contribute $5,000 to the neighborhood group. The gas station could generate another $3,000 in annual special assessments through the redevelopment corporation that the notes indicate could be used for extra security in the area. SLU, which has historically donated to the Tiffany Community Association, would continue to guarantee a $6,000 annual contribution to the group, according to the meeting notes.

But the project seems to have slowed for now. The city’s excise division said QuikTrip withdrew an August application for a liquor license at the site in October. Even so, real estate records show QuikTrip purchased the house at 3616 McRee Avenue, next to the SLU parking lot, in late November.

“I don’t think they’re done,” said Wilson, one of the neighbors. “It may be a couple of years. They may wait for a more opportune time.”

Creve Coeur said no to a new QuikTrip, citing traffic concerns. But a judge overruled the city.

At issue in the case: How much say do local governments have over development?

SLU tried to distance itself from the transaction in May, but QuikTrip has had a contract with the university since February 2019.

The retailer plans to open by July 2023, the developer said.

'Nuisance' properties across St. Louis tie up police resources as city leaders work to rein them in

“It’s one of the biggest factors on the quality of life in ... many parts of the city,” Alderwoman Cara Spencer said of nuisance properties.

St. Louis University has pulled a demolition permit for the building at Grand and Chouteau.

If approved by the St. Louis Board of Aldermen, the plan would let SLU guide development around a new St. Louis University Hospital proposed by SSM Health.

The building should be complete by the second quarter of 2020

St. Louis University is considering selling a parking lot at the southern entrance to its campus on Grand Boulevard to QuikTrip for the gas station chain's ninth south St. Louis location. The university in 2016 won redevelopment rights in the area so it could guide “signature” projects in the urban core. (Jacob Barker)

The St. Louis University-owned parking lot on the edge of the Tiffany neighborhood at Grand Boulevard and Interstate 44 where QuikTrip wants to build another location. It has about 60 in the region already. SLU controls a redevelopment corporation meant to guide signature development at key intersections like this one. (Photo by Jacob Barker/Post-Dispatch)