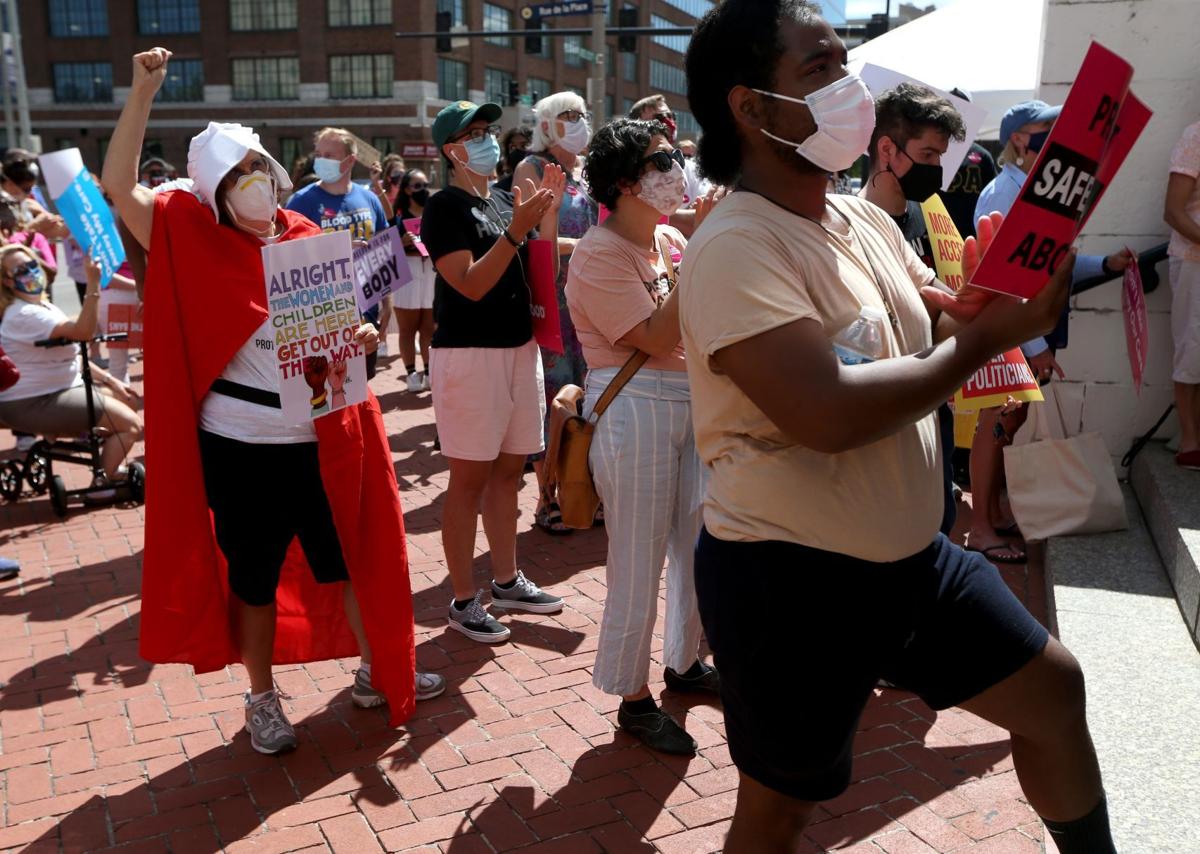 "I have been watching this fight for a long time. I am outraged it continues," said activist Joan Lipkin, who dons a Handmaid's Tale costume during a Stop the Bans rally held Thursday, Sept. 9, 2021, at the Old Courthouse. Abortion rights activists held the event to oppose abortion bans, including Missouri's eight-week abortion ban, which faces a hearing in federal appeals court later this month. Photo by Laurie Skrivan, lskrivan@post-dispatch.com 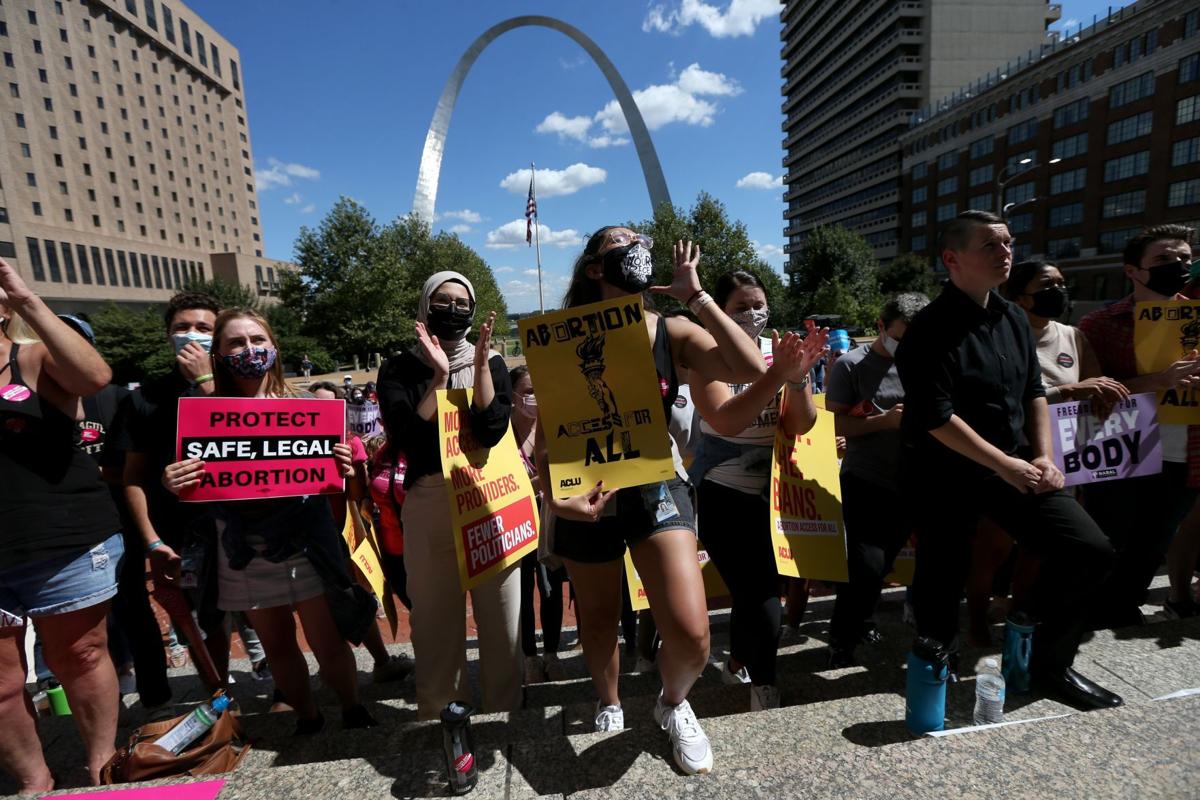 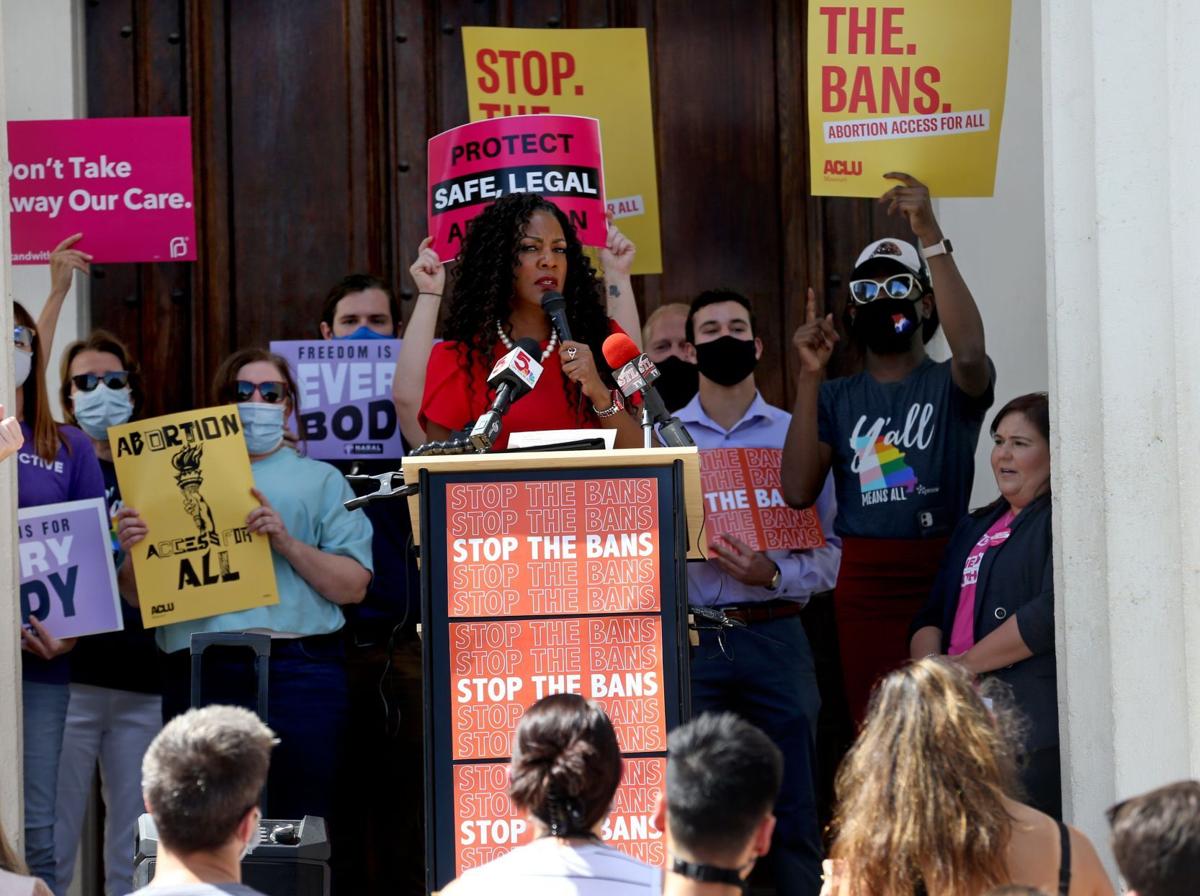 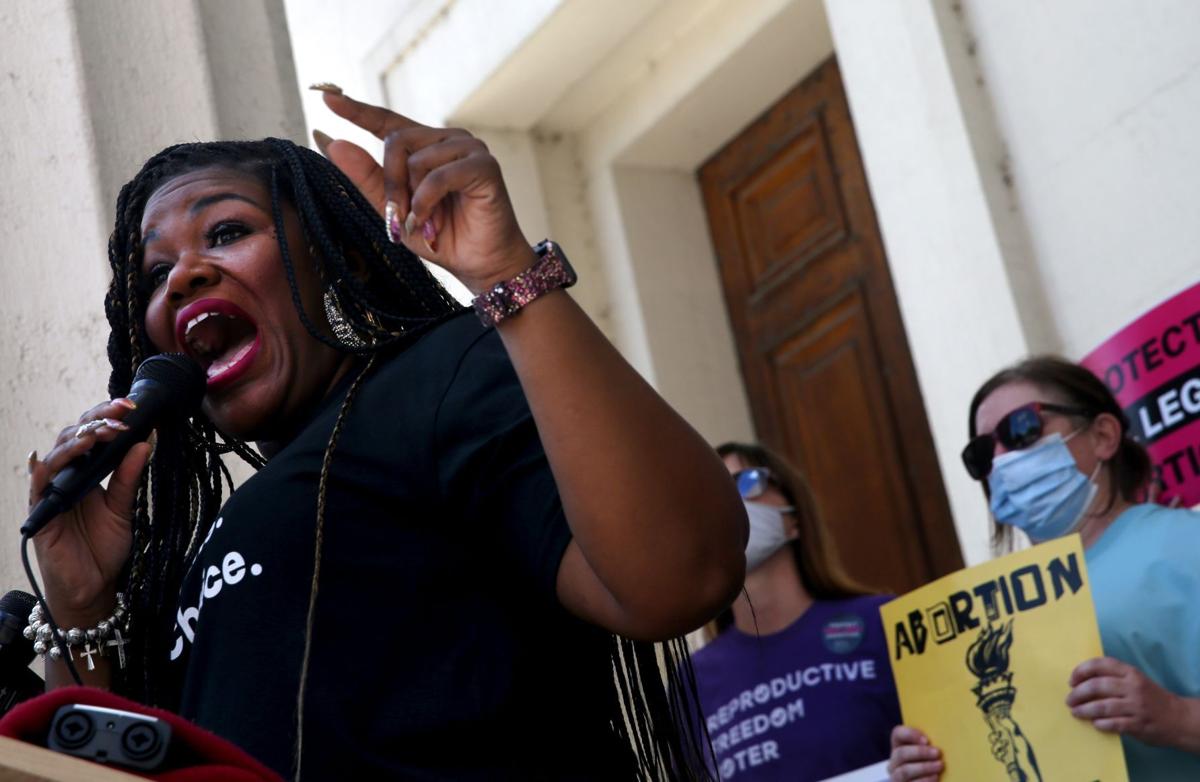 ST. LOUIS — U.S. Rep. Cori Bush told her personal abortion story Thursday on the steps of the Old Courthouse, at a rally days before a federal appeals court will consider whether a strict abortion law will take effect in Missouri.

“People thought she wouldn’t turn out to be much,” Bush said, referring to herself in the third person. She related few details, but described growing up through sexual abuse and depression. She became pregnant. “She didn’t know herself, let alone know how to care for anybody else. She wasn’t ready … (but) services were available to treat her.”

Bush, D-St. Louis, told a crowd of abortion rights supporters that the girl who got pregnant was now standing before them as a member of Congress. She said it was the first time she was publicly sharing her experience.

A Texas law that took effect last week bans abortions after fetal cardiac activity can be detected and deputizes residents to report anyone who “aids or abets” abortions after that time. The Justice Department on Thursday sued to overturn the Texas law.

Missouri is one of several states poised to impose abortion bans early in pregnancy, before many women are aware they’re pregnant. In 2019, Gov. Mike Parson signed a bill banning abortion after eight weeks of pregnancy, but the law was blocked in federal appeals court earlier this year. A hearing is set for Sept. 21 on the matter in the 8th U.S. Circuit Court of Appeals. Currently, Missouri law allows abortions up to 22 weeks after a woman’s last period.

The downtown rally, co-hosted by several reproductive rights organizations, drew about 200 activists carrying signs that read “stop the ban.” It also drew one vocal abortion opponent who occasionally drowned out the speakers with chants of “Black lives matter” while he brandished a Black baby doll in the air.

“Texas’ inhumane six-week abortion ban doesn’t allow exceptions for rape or incest,” Jones told the crowd. “That doesn’t sound pro-life to me. They’re pro-birth, not pro-life … Women who are raped, under this horrible law, will be forced to carry their rapist’s baby to term. (Women) should be able to decide when they become parents — a decision that greatly impacts the trajectory of their lives and their incomes.”

Rusti Levin, of University City, came to the rally with a sign reading, “The bottom line: It’s not your business so STFU.”

“I’ve been at this game for 50 years,” Levin said. “I’ve been fighting this fight since I was 20 years old … Republicans are hell-bent on hurting women and children. It makes me mad, and it makes me want to fight harder.”

Rep. Cori Bush and other members of Congress share own abortion stories at hearing

Their testimony came in response to the wave of anti-abortion legislation being advanced in several states, including Missouri.

"I have been watching this fight for a long time. I am outraged it continues," said activist Joan Lipkin, who dons a Handmaid's Tale costume during a Stop the Bans rally held Thursday, Sept. 9, 2021, at the Old Courthouse. Abortion rights activists held the event to oppose abortion bans, including Missouri's eight-week abortion ban, which faces a hearing in federal appeals court later this month. Photo by Laurie Skrivan, lskrivan@post-dispatch.com