ST. LOUIS — Alderman John Collins-Muhammad Jr. on Monday blamed an unknown hacker for posting a tweet on his account that threatened communities and wards whose leaders were critical of a key political ally.

The tweet, published at 7:57 p.m. Sunday and later deleted, came in defense of Alderman Joe Vaccaro: “@Aldermanjoe is my friend. If you come for him, Know that I (WE) are coming for you. Touch him, I’m ravaging your whole community/ward. That’s a promise. He a Mad Man. He my friend. Which means he is a friend to the @LouisFarrakhan. True me. True him. AND SEE WHAT HAPPEN!”

Collins-Muhammad, D-21st Ward, commented on the deleted tweet on Monday morning, saying in a tweet about 10 a.m. that his account had been hacked. He told the Post-Dispatch he was alerted to the tweet about 9 p.m. Sunday and deleted it within the hour after he reported the alleged hack to Twitter.

Asked why he didn’t publicly comment on the deleted tweet until Monday morning, Collins-Muhammad said he did not know until then that other Twitter users had taken a screenshot of the post and circulated it.

“I deleted the tweet, I wake up and I see it viral on Twitter, and that’s why I made the public statement,” Collins-Muhammad said.

Collins-Muhammad said he did not have direct evidence from Twitter, as of noon Monday, that his account had been hacked, but that he has changed his account’s password and deleted the Twitter application from devices other than his cellphone while the company investigates. The Twitter account also was locked on Monday afternoon, which meant only approved followers could see his tweets.

“The only thing I can say is the truth ... and I never shy away from the things I say or do if it is in fact me,” Collins-Muhammad said. “I would not allow anyone to put blame on me for something I did not do.”

Collins-Muhammad claimed the hacking could be linked to criticism of aldermen who supported a controversial bill to allow a private company to fly surveillance airplanes over the city in an effort to help police investigate crime.

He and Vaccaro, D-23rd Ward, were among aldermen who gave the bill preliminary approval in a 15-14 vote Friday. Vaccaro, who chairs the aldermanic public safety committee, was criticized on Twitter by opponents of the bill.

On Sunday, Vaccaro responded to the tweet from Collins-Muhammad’s account by thanking him: “Thanks John, we are friends and I appreciate you.”

Collins-Muhammad said he had not talked to Vaccaro directly and that Vaccaro did not know the tweet was a hack.

“I don’t know if I saw the tweet — I think I was seeing the aftermath of the tweet when people were picking on John,” Vaccaro said.

He referenced other tweets sharing pictures of him with St. Louis Police Association spokesman Jeff Roorda or using curse words.

“I believe his (Collins-Muhammad’s) account was hacked,” he said. “I believe whoever did this tried to make him and me both look bad.”

In addition to aerial surveillance, Collins-Muhammad and Vaccaro have been key allies on other issues, including Collins-Muhammad’s push for a ballot measure that would keep the number of wards at 28, rather than the 14 approved by voters in 2012.

The deleted tweet included a reference to Louis Farrakhan, leader of the Nation of Islam.

Collins-Muhammad, who is a member of the Nation of Islam, alleged the reference was part of the hacker’s intent to discredit him.

“People would love to paint the young Black Muslim with a name like Muhammad as a violent thug,” Collins-Muhammad said.

But the RAND Corp., which did the preliminary study, says it won’t decide on the pilot program’s overall effectiveness until more data is available over the next year. St. Louis is considering a similar trial program, for 18 months.

Collins-Muhammad claimed again Thursday his account had been hacked, despite a Twitter spokesperson saying they had no evidence that was the case. 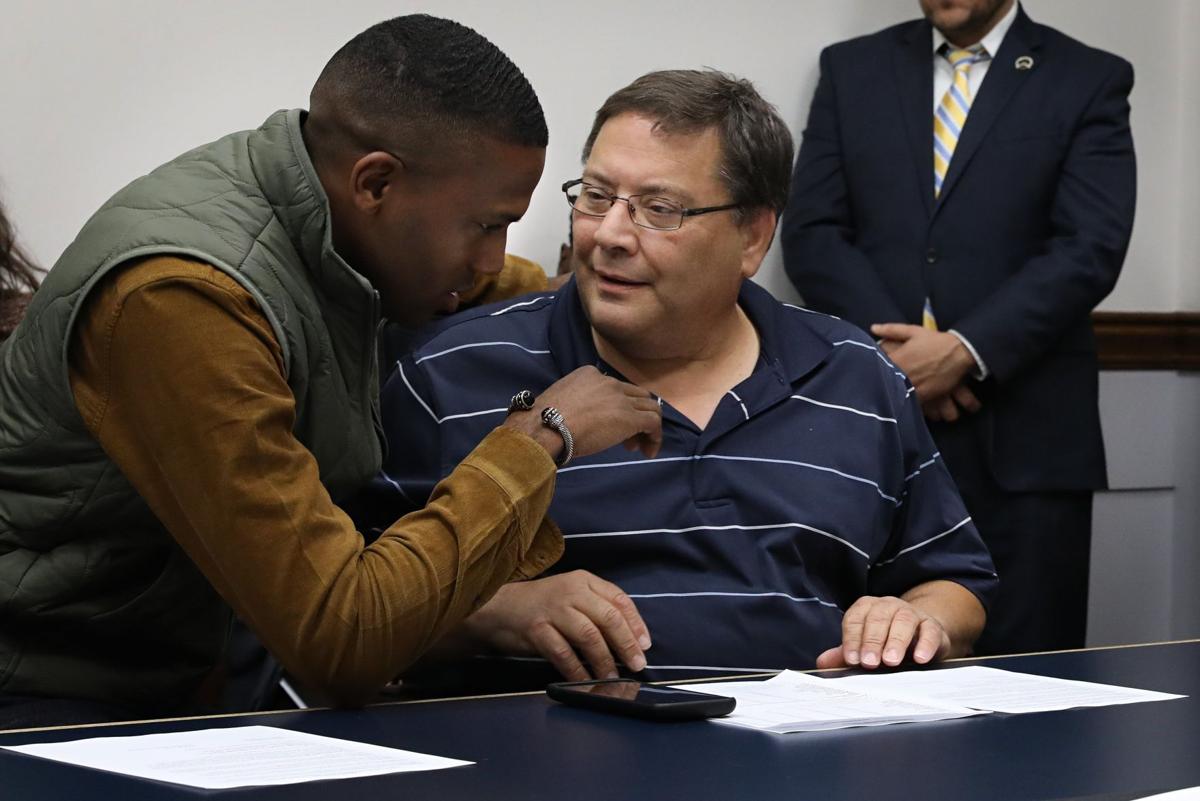 Aldermen John Collins-Muhammad (left) and Joseph Vaccaro talk quietly during a meeting of the St. Louis Board of Aldermen public safety committee on Tuesday, Oct. 17, 2017. A resolution put forward by Vaccaro praising St. Louis police for their efforts during recent protests died in committee on a 3-5 vote. Photo by David Carson, dcarson@post-dispatch.com 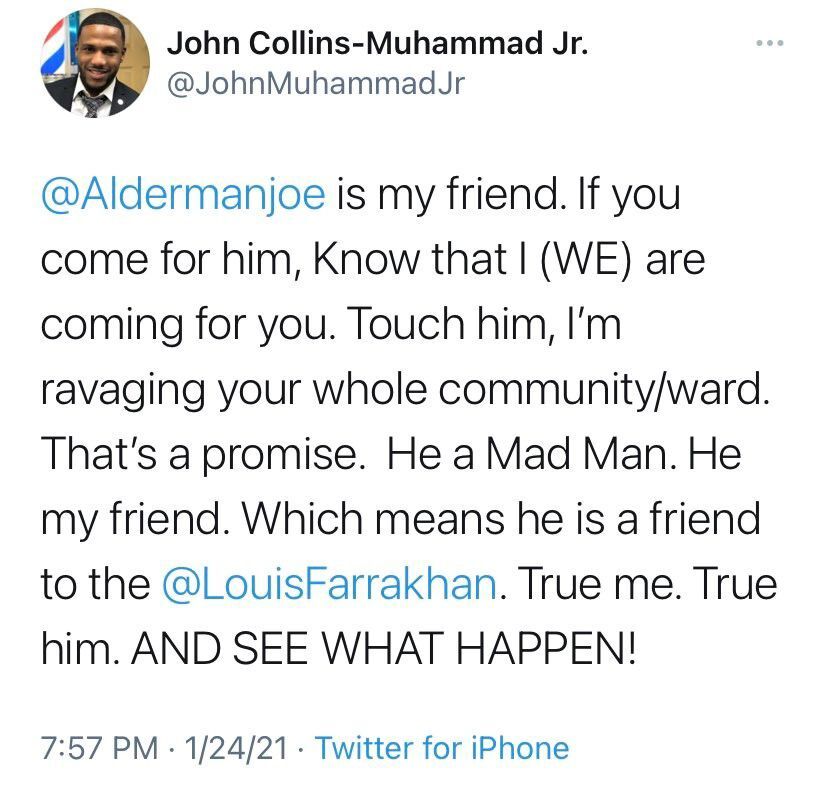