ST. LOUIS — The Board of Aldermen on Friday approved a resolution recognizing May 1 as “International Workers’ Day,” but sent a separate resolution marking Saturday as “Loyalty Day” back to committee.

The labor-related resolution, co-sponsored by Alderman Megan Ellyia Green and 18 other aldermen, noted May 1, which is recognized as a workers’ holiday “in dozens of countries around the world,” has deep roots in the U.S., including St. Louis, “stretching back to the 1877 St. Louis General Strike, which was built around multi-racial solidarity.”

The resolution states: “Today organized labor in our city is working hard to restore the multiracial unity evidenced during the 1877 strike, while building a labor movement that can meet the challenges of the 21st century.”

The second resolution, sponsored by Alderman Carol Howard, recognized May 1 as “National Loyalty Day,” a “special day for the reaffirmation of loyalty to the United States and for the recognition of the heritage of American freedom.”

“Loyalty Day” originated during World War I and the Red Scare that followed, and was intended by promoters to supplant May Day celebrations. “Loyalty Day” was made a recurring national holiday by Congress in 1958, and first officially observed on May 1, 1959.

But St. Louis has a long history of celebrating “Loyalty Day,” stretching back to Mayor Henry Kiel, a Republican, who issued a declaration in 1917 as the U.S. entered the war. A number of city neighborhoods, including Princeton Heights and Holly Hills, have marked the day with events, speakers and parades, according to Howard’s resolution.

Another interesting day at the BoA. Loyalty Day was created in an attempt to erase May Day/Workers' Day. 🤢 https://t.co/g21PgWdIFX

In 1949, Mayor Joseph M. Darst, a Democrat, said “Loyalty Day” in St. Louis was designed to counter the “subversive acts” of those who “would endeavor to undermine the faith of our people in the government that has given them the freedom they now enjoy.” 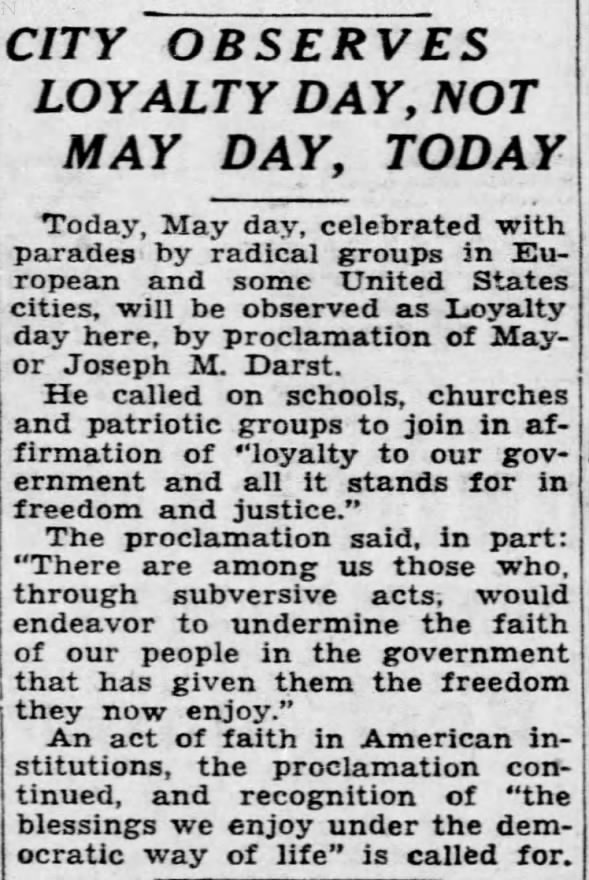 Both resolutions were on the aldermanic courtesy resolution calendar, which is usually approved without debate, but after several aldermen commented on the “Loyalty Day” measure, Alderman Sharon Tyus asked that Howard’s resolution be moved to the regular resolutions calendar for first reading.

An effort to suspend the rules to consider the “Loyalty Day” resolution failed to get the required two-thirds vote and was sent to committee.

However, the board later voted 22-1 to suspend the rules to consider Green’s resolution, which largely spoke about the merits and achievements of organized labor. (Howard voted no, and Aldermanic President Lewis Reed and Jeffrey Boyd voted “present” on the motion.)The board adopted the resolution by voice vote at noon, without dissent.

Resolution passes, 16-9, with some opponents contending it’s part of a conservative effort to brand liberal Democrats as communists.