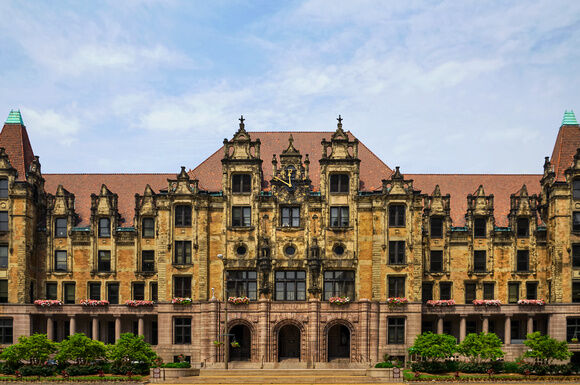 ST. LOUIS • For the first time, St. Louis has an annual operating budget that has surpassed $1 billion as city leaders grapple with an aging infrastructure.

The figure is mostly symbolic.

The $1,005,912,108 budget went into force quietly on Tuesday, and its recent legislative passage was uneventful.

Though the number sounds big, it is a mild 1.9 percent increase over the 2014 fiscal year budget in a city with stable income streams but anemic population growth.

Despite stemming the tide of dramatic population losses and maintaining a stable credit rating, the city is looking for more money to help it grow.

The budget includes increases to help fund pay and medical cost increases for police and city workers. But it also includes saving from realignments resulting from the city having control of the St. Louis Metropolitan Police Department for the first time in more than a century.

About 55 percent of the city’s general fund is earmarked for public safety expenses. About 10 percent goes to the city’s judicial offices, 7 percent to the streets department, 6 percent for the board of public service, 5 percent to the operations of general government, 4 percent to the parks and recreation division and 2 percent to fund county offices.

Most notably, the city has seen an improvement in its pension obligations, which have spiked over the past decade. In recent years, the city has tackled the tough issue of reducing those costs.

“If we had not done that, we’d be in a bad position right now,” said Jeff Rainford, chief of staff to Mayor Francis Slay. “Because we made some hard decisions, we have kept our A-plus credit rating and kept our financial position stable.”

The budget for police, fire and other pensions is $86 million, about a $14 million drop from last year, when the obligation topped out at nearly $100 million.

Other Midwestern cities such as Chicago and Detroit have seen their credit ratings downgraded because of their failure to address skyrocketing pension obligations.

Still, the city finds itself grappling with an aging infrastructure and little money for major repairs and new equipment.

Lewis Reed, the president of the Board of Aldermen, said resident input on the budget centered mainly on public safety concerns and more money for neighborhood development.

The budget does not call for a tax increase. However, city leaders are considering a bond proposal that would.

“It’s tough to do everything with what we have,” Reed said. “This bond initiative will give us a better opportunity to address people’s needs.”

The $199.5 million bond issue proposal could be placed before voters in November. Proceeds of the bond sales would go solely toward the city’s infrastructure needs.

The city’s Capital Committee has come up with recommendations for the bond issue, including new firetrucks, building demolitions, modernized police equipment and improvements to city buildings.

“In recent years, with operating budgets remaining tight, there has been little in the way of resources available for addressing the city’s numerous capital improvement and equipment needs,” the committee wrote. “... The sheer volume of need far outpaces the ability of either the operating budget or existing capital resources to sufficiently fund the many capital items that need to be addressed.”

The bonds would be paid over 20 years from a citywide property tax amounting to an annual increase of about $35 on a property valued at $100,000.

The Board of Aldermen is expected to debate ballot language on the issue next week.

Before any marriage, county better check on city's finances

ST. LOUIS  •  Mayor Francis Slay signed a bill on Friday that will put into place the city's first budget to top $1 billion.

The budget is for the fiscal year 2015, which starts on Tuesday.

160,000 notices are expected to start hitting mailboxes on Saturday