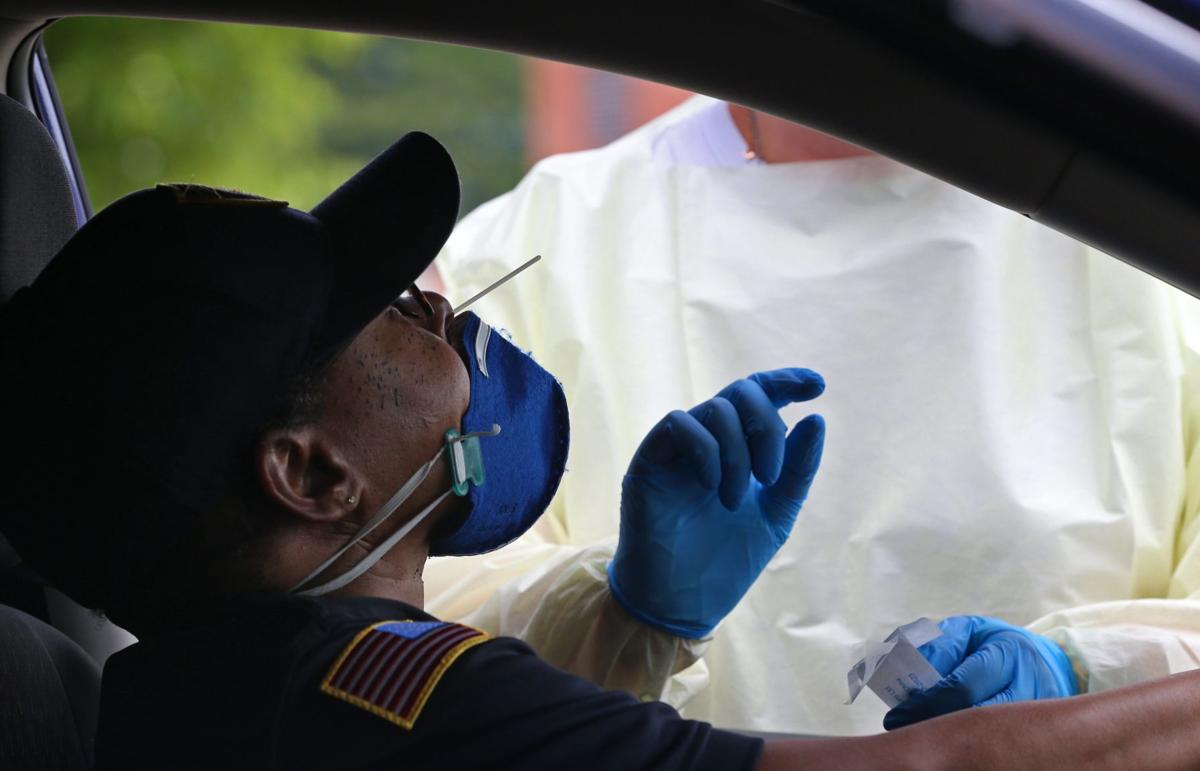 CLAYTON — With just the weekend remaining before businesses in St. Louis and St. Louis County begin to open their doors for the first time in two months, a group objecting to the easing of stay-at-home orders staged a protest Saturday with a parade of honking cars going through Clayton, Ladue and Frontenac.

The group HealthB4Wealth says Mayor Lyda Krewson and County Executive Sam Page are putting thousands of lives at risk because, they say, there is not enough personal protective equipment even for essential workers — let alone those who will be returning to work. They also say the city and county do not have enough testing and contact tracing in place to keep the coronavirus pandemic on its heels.

Meanwhile, Saturday saw a rise in new hospital admissions at the area’s four major health systems, to 27 from 24, according to data from the St. Louis Metropolitan Pandemic Task Force. The number of people in hospitals dropped to 493, from 505. While the number of patients in intensive care units rose to 122, from 120, the numbers on ventilators dropped to 84, from 88. All of the numbers are significantly down from a month ago.

Dr. Alex Garza, head of the task force, has said businesses could begin to open safely but only if people cooperate by social distancing, washing hands and wearing face masks. He warned on Friday that failure would create a second wave of infection that would be worse than the first.

Essential businesses such as grocery and hardware stores have been allowed to operate with restrictions in the city and county during the pandemic, but restaurants have been limited to curbside and delivery service, and most other businesses have been forced to cease. Starting Monday, the city and county will begin to allow employees and customers inside many other types of buildings, including restaurants and offices.

Area leaders have pointed to the ability to test masses of people for the coronavirus as being critical to restarting the economy. But tests remained elusive in the days before the area’s grand reopening.

In remarks to reporters, Page has said about 20,000 county residents have been tested and the county was bidding on 100,000 tests. On Friday, he said the county had a “few thousand tests on hand” and was trying to buy tens of thousands. Krewson said about a week ago the city had received 13,000 tests and because of the influx “you’re going to see the number of cases go up.”

HealthB4Wealth organizers said the testing process needs to be much more robust before people can start breaking their isolation. The parade wove through Clayton from the Forsyth Metrolink stop, west on Maryland Avenue to Ladue Road, and south on Lindbergh Boulevard, ending at Plaza Frontenac. Several of the cars had signs with the messages #NotDying4Lyda and #NotDying4Page.

Protesters drove by the same corner in downtown Clayton where, on April 21, dozens of people gathered with Gadsden flags and claims that COVID-19 is treatable to rail against Page’s emergency order forcing most businesses to remain closed.

“We are demanding that the city and county delay reopening until it is safe for all workers and all residents of St. Louis,” said Jamie Moffa, a Washington University medical student who helps organize HealthB4Wealth.

HealthB4Wealth also is collecting signatures on an online petition demanding the decision be reversed and that the economy remain closed until health care personnel can work safely and places of business are safe to enter.

Among the group’s most high profile supporters has been Dr. LJ Punch, an associate professor of surgery at the School of Medicine at Washington University, an anti-violence activist and St. Louis County police commissioner.

“We have the opportunity to be conscious and protect people and instead we choose to continue to focus on what we value, and what we are showing is that value is not human life,” Punch said in an interview Friday.

This story has been updated to reflect the correct title for Dr. Punch.

St. Louis will allow some restaurants to put tables on adjacent lots and streets to accommodate social distancing

Eateries will have to work out details with members of the Board of Aldermen and neighborhoods.

‘A tug-of-war’ as St. Louis, St. Louis County businesses consider how to reopen

Some businesses worry about employees, others about patrons, and still others about legal issues like lawsuits and professional licenses.