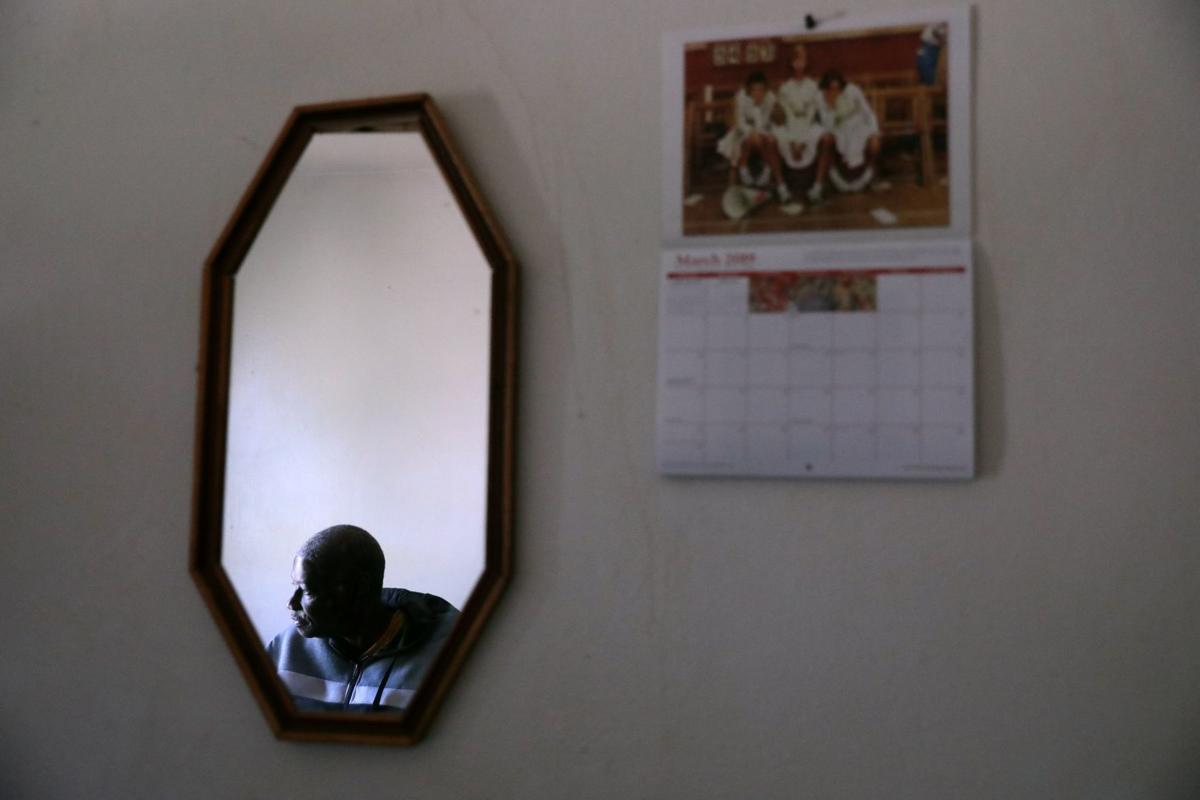 Leslie Carpenter, 57, reflected in her bedroom mirror in the home that she shares with her niece, Sharita Phillips, 49, and Phillips' developmentally disabled son on Isabella Avenue in Wellston on Friday, April 26, 2019. They live in a single-family unit of public housing that may be demolished soon along with the apartment complex next door. Housing officials are considering getting rid of 201 public housing units in Wellston. Photo by Cristina M. Fletes, cfletes@post-dispatch.com. 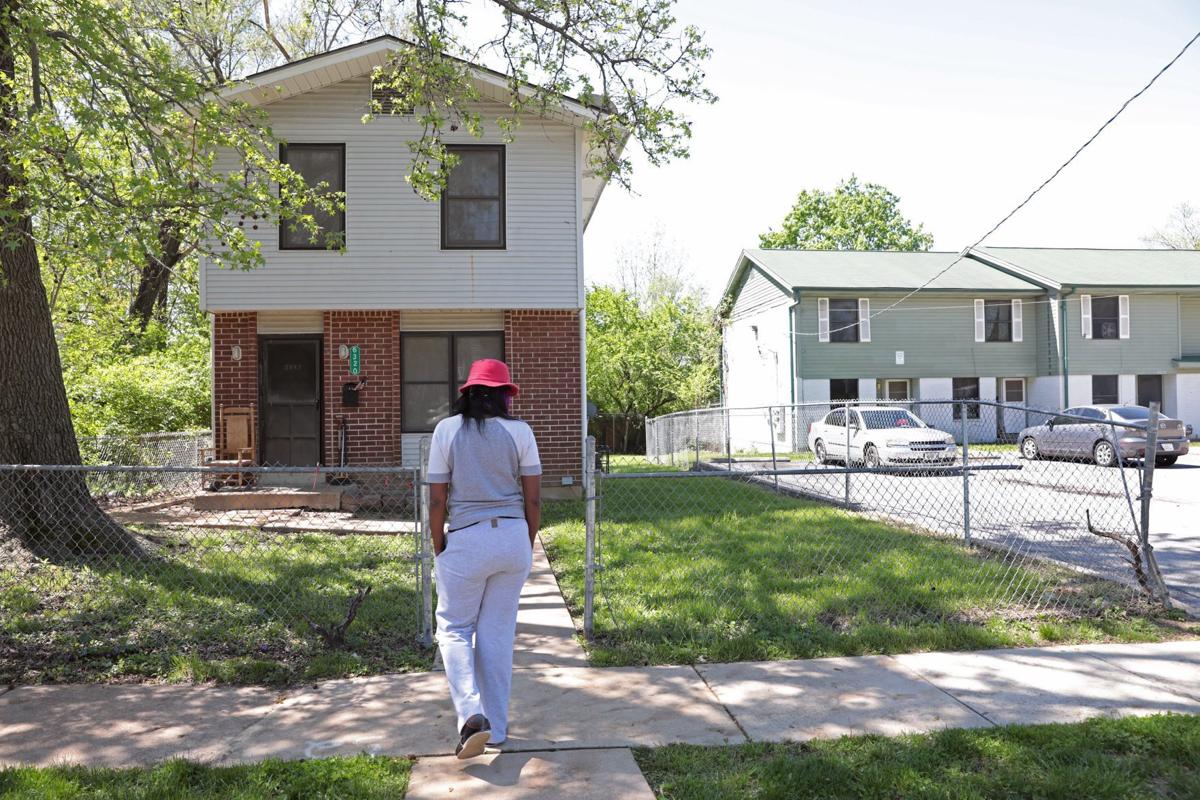 Sharita Phillips walks toward her home on Isabella Avenue in Wellston on April 26. Phillips lives with her aunt and developmentally disabled son in a single-family unit of public housing. 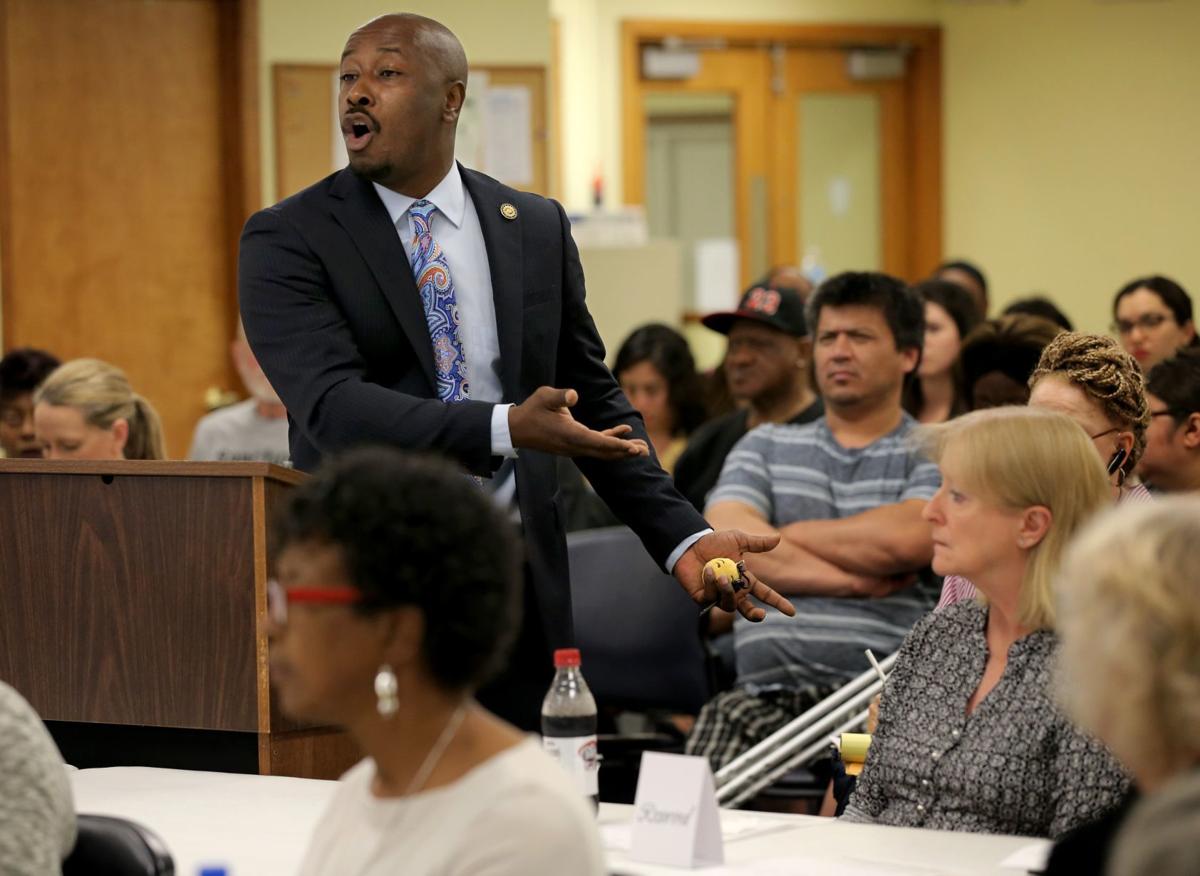 Wellston Mayor Nathaniel Griffin speaks at a hearing at the Housing Authority of St. Louis County on Thursday, May 23, 2019, before the board voted on the fate of public housing in Wellston. Photo by Christian Gooden, cgooden@post-dispatch.com

WELLSTON — St. Louis County and Wellston officials submitted the outlines of a plan Tuesday to the U.S. Department of Housing and Urban Development that could preserve 186 of the low-income community’s 201 public housing units rather than demolishing them.

The proposal uses one of HUD’s programs to transition the units to private ownership while using other programs to finance a nearly $20 million rehab of the deteriorating housing. It follows St. Louis County Executive Sam Page’s successful push for a 120-day pause in HUD’s plans which would have demolished the units and given tenants rental vouchers to use on the open market — vouchers that many landlords refuse to accept.

“All of our neighbors deserve safe and affordable housing,” Page said in a statement. “That goal isn’t easy to achieve, but this plan is an important step for the people of Wellston. This plan shows what can be done when we’re honest with each other and work together.”

However, it’s not yet clear when the housing units could begin to see the repairs that have been deferred for years under federal management.

“Who’s going to own them after this is still a question that has to be answered,” said Lisa D’Souza, an attorney who represents Wellston tenants. But she said preserving 186 units would be a win because affordable housing “is already way too scarce in our community.”

HUD would have to sign off on the use of its Streamlined Voluntary Conversion program that helps public housing transition to private ownership and grant a waiver to make that program work. Meanwhile, HUD signaled in a letter last week it disagreed with a local report that found the housing was structurally sound.

HUD’s approval is needed prior to issuing a request for proposals from developers who could take over and manage the housing units and be part of an application for federal low-income housing tax credits to finance needed repairs.

“HUD has to make the decision on whether to accept the redevelopment plan,” said Susan Rollins, executive director of the Housing Authority of St. Louis County, which now owns the Wellston public housing units. “Now it’s in HUD’s hands.”

In March, the units were transferred to the county housing authority. That agency had planned to operate them for only a short time while tenants were relocated and the units demolished.

But when the Page administration unexpectedly took power in the middle of the process, the new county executive put the brakes on the plan. He called it part of President Donald Trump’s administration’s efforts to divest itself of public housing in favor of housing vouchers — forcing Wellston residents to move without considering other options.

Now, the county housing authority, an independent agency with its own board, is trying to manage the new units on top of its existing portfolio.

“We’re doing the very best that we can … with the small amount of money available,” Rollins, the director, told her board Tuesday at the housing authority’s regular monthly meeting.

There was about $700,000 in a capital funds account transferred along with the Wellston housing units to the county housing authority, according to a financial report presented to the board. About $100,000 of that will be used through the end of the year to make emergency repairs. The Wellston units are projected to run a $331,000 deficit this year, a loss projected to grow to $546,000 next year.

Meanwhile, the county housing authority board voted Tuesday to write off about $54,000 in uncollected rent payments for the year from the Wellston units, a number that seemed to surprise some board members.

“This just shows you the difficulties that have been experienced over the years in the management of the Wellston Housing Authority,” Rollins said. “This is very high. I think the next time around when we do it, it might be even higher.”

But Wellston Mayor Nathaniel Griffin said Tuesday he was optimistic a developer would be interested in the plan that emerged over the last four months.

“Private investors will come forward,” he said. “With all the homework that went into this, all the research … we have put together a plan that would be attractive for anyone.”

An estimated $17 million in tax exempt bonds would have to be issued from the Missouri Housing Development Commission to finance the development, with rents from the housing units supporting repayment.

Rollins said the county housing authority hadn’t been approached yet about whether to respond to a potential RFP to partner in the venture. She said early numbers indicated it would take about $11 million to rehab the scattered sites and some $8.6 million to upgrade the three multifamily buildings that contain 76 units.

The plan calls for 186 vouchers for the preserved Wellston units while also requesting 136 choice vouchers for Wellston residents who want to move out of the units.

Families have been moving out, with only about 135 of 201 units now occupied.

Hunter Kurtz, HUD’s Assistant Secretary of Public and Indian Housing, sent a letter last week saying he “strongly disagreed” with a local engineering report released last month that contradicted HUD and found the Wellston units were structurally sound. He said he was “taken aback” by their state during a visit and didn’t believe they met HUD’s minimum requirements of being “decent, safe and sanitary.” Since July, 23 families have left voluntarily, he wrote.

“These families are leaving without relocation assistance and without vouchers in a metropolitan area where the cost of rent is increasing and voucher waitlists are more than two years long,” he wrote. “I doubt these residents would be giving up their housing assistance because of “minor” issues.”

The letter was sent to Mayor Griffin and the local congressional delegation. St. Louis County wasn’t included as a recipient.

Without vouchers tied to the Wellston units — a guaranteed income stream — it's less likely a private developer or operator would be willing to take control of the units from the St. Louis County Housing Authority.

Last month, the Housing Authority of St. Louis County agreed to dedicate some of its federal rent vouchers to a series of apartment buildings and houses as part of a plan pushed by Wellston and St. Louis County officials to preserve 186 public housing units.

Rather than return 201 troubled public housing units to local control, a plan is afoot to demolish or get rid of them.

Plan to get rid of Wellston public housing moves forward

The fate of the 201 housing units — and about 500 people who live inside them — has become a rallying cry over the shortage of affordable housing in the St. Louis region. It has also opened the curtain on poor government oversight of the properties amid a national trend to do away with traditional public housing stock.

Demolishing public housing in Wellston may be put on hold by St. Louis County Executive

The Page administration is taking St. Louis County off the sidelines in the contentious affordable housing issue.

St. Louis County Executive asks for pause in the process and a new plan for Wellston's public housing residents.

CLAYTON — The U.S. Department of Housing and Urban Development has agreed to pause for 120 days plans to demolish public housing in Wellston, …

The report commissioned from the Housing Authority of St. Louis County says three of the larger public housing buildings are structurally sound.

Leslie Carpenter, 57, reflected in her bedroom mirror in the home that she shares with her niece, Sharita Phillips, 49, and Phillips' developmentally disabled son on Isabella Avenue in Wellston on Friday, April 26, 2019. They live in a single-family unit of public housing that may be demolished soon along with the apartment complex next door. Housing officials are considering getting rid of 201 public housing units in Wellston. Photo by Cristina M. Fletes, cfletes@post-dispatch.com.

Sharita Phillips walks toward her home on Isabella Avenue in Wellston on April 26. Phillips lives with her aunt and developmentally disabled son in a single-family unit of public housing.

Wellston Mayor Nathaniel Griffin speaks at a hearing at the Housing Authority of St. Louis County on Thursday, May 23, 2019, before the board voted on the fate of public housing in Wellston. Photo by Christian Gooden, cgooden@post-dispatch.com