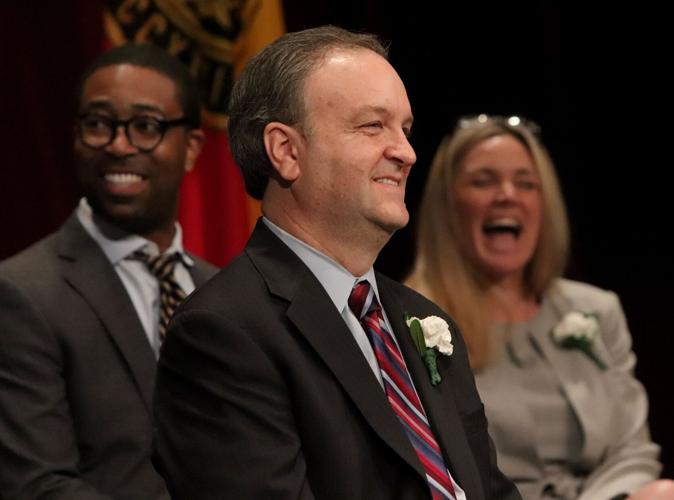 Sam Page listens to a humorous remark made by Elder Shawntelle L. Fisher of the SoulFisher Ministries before he delivers the State of the County Address Wednesday, April 6, 2022, at the Touhill Performing Arts Center Mary Ann and Desmond Lee Theater, on the UMSL campus. Behind Page is his Chief of Staff Calvin Harris, left, and at right, Deanna Venker, Chief Administrative Officer of St. Louis County. Photo by Hillary Levin, hlevin@post-dispatch.com 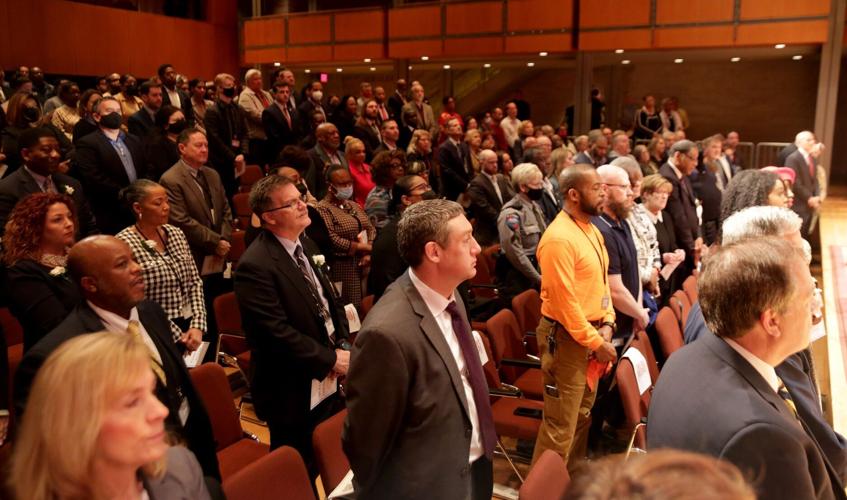 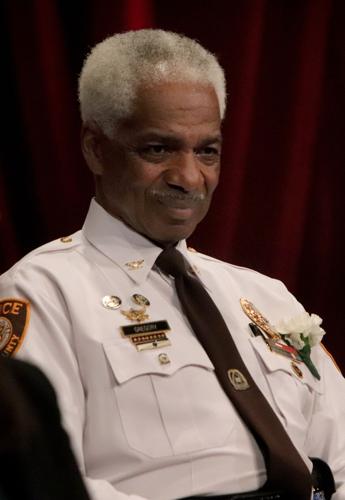 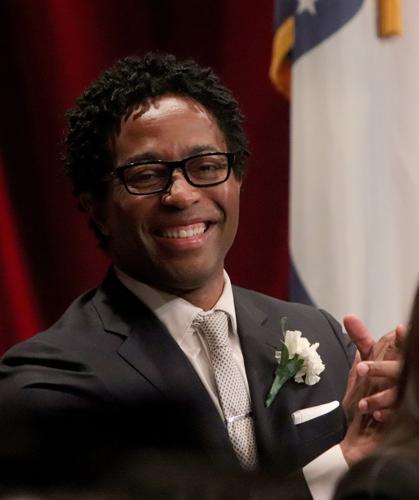 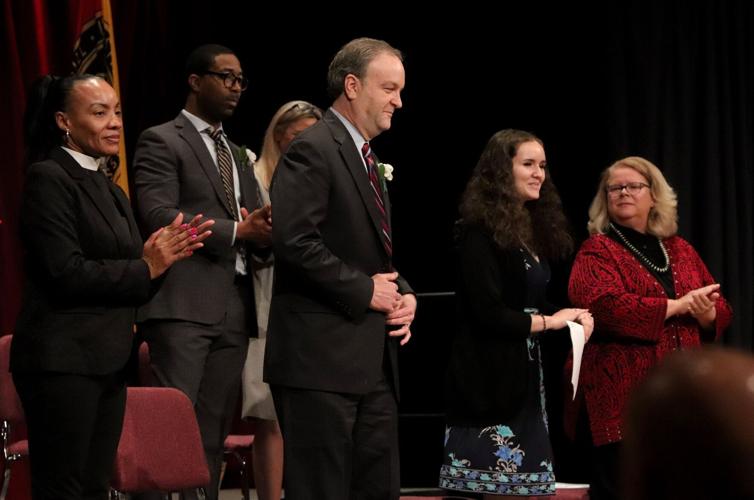 BELLERIVE — St. Louis County Executive Sam Page on Wednesday sought to assure residents that the state’s most populous county remains “strong” after enduring the worst of the COVID-19 pandemic and is growing into a county “of prosperity, innovation and inclusion.”

The “State of the County” address drew more than 100 people on an invitation-only list to a theater on the University of Missouri-St. Louis campus.

Page, a Democrat who became county executive in 2019, touted his administration’s work over the past two years, from daily residential services to unprecedented efforts to meet the health and economic threats of the coronavirus.

And Page, who had taken office with a charge to restore faith in government after his predecessor, Steve Stenger, was indicted on corruption charges, promised a brighter future.

“We have made it through an incredibly challenging time,” he said. “We all are holding our collective breath that the pandemic is in the rearview mirror.

“We have been through some of our darkest moments. But we see the light.”

Page, who is running for reelection to a full, four-year term after surviving a four-way Democratic primary in 2020 to complete two years of Stenger’s term, said his address Wednesday was but one of several plans waylaid by the deadly coronavirus since it arrived in the region in March of 2020.

The pandemic cast “a long shadow” over the county and “occupied most of our time,” he said during lengthy remarks. The county had been “in the spotlight” of contentious politics because of its mask requirements and occupancy restrictions on businesses.

But by Wednesday, Page was “cautiously optimistic that the worst of the pandemic was behind us,” touting the county’s position leading the state in vaccinations. At least 63.7% of county residents fully immunized against the coronavirus.

And “county government never closed,” Page said, thanking employees for their work on road repairs, online services for residents, vaccine clinics and the disbursal of $29 million in rental, mortgage and utility aid.

“Because of their determination and ingenuity, I can declare that the state of our county is strong,” Page said. And I can assure you that the future of St. Louis County is bright.“

The measure, which passed with over 60% of the vote, says the county executive must forfeit his office if he holds other employment or works as a contractor.

Page also pointed to recent developments including the region’s first nonstop flights to the European continent in several years, Gateway Studios — a massive entertainment production facility in Chesterfield — planned improvements to West Florissant Avenue and a bill to expand anti-discrimination protections against for gender expression.

The county is planning for roughly $85 million in federal pandemic aid left to spend, he said. Another influx of cash from the recent Rams settlement, a $458 million state settlement with opioid manufacturers, and a $1.2 trillion federal infrastructure plan awaits.

Page said Wednesday that decisions over the money shouldn’t be rushed, calling them an “investment in our future.”

The executive did not take questions after the address and did not meet with reporters.

His remarks did not go unchallenged just after the address by some council members in a bipartisan majority that has battled the executive over federal pandemic aid spending, mask mandates and Page’s decision to continue moonlighting as a doctor while in office.

“The county executive does not pass legislation,” she said. “When you do need legislation, you need to to come to the council. Give us the explanations of what we need. Make sure that we are comfortable with what we’re trying to pass.”

Harder, who is currently the longest-serving member of the body, conceded the project is an example “of a lot of good things going on” in the county. But he criticized public health measures like occupancy limits and business curfews as limiting greater economic growth.

And Rep. Shamed Dogan, R-Ballwin, who is running for the GOP nomination for the county executive seat, and Jane Dueker, an attorney and lobbyist challenging Page in the August Democratic primary, were quick to offer rebuttals.

In a 10-minute video, Dogan said Page overlooked crime in the county and an overall decline in population in recent years.

“I honestly don’t recognize the sunshine and roses version of St. Louis County he talked about in his speech,” Dogan said.

“I’m going to work hard to bring people together instead of dividing people,” said Dogan, who has said he wants to build a coalition of Republican and Black voters in heavily Democratic north St. Louis County.

Dogan vowed to revise a public safety sales tax passed in 2020 to ensure greater funding for police and “work with our business community” instead of “shutting them down,” and “respect the County Council.”

Dueker, who had attended Page’s address, said Page was avoiding public comment on voters’ decision Tuesday to bar executives from secondary employment. Voters also rejected a countywide tax on out-of-state internet sales and a provision to lease part of a public park to a private school.

Dueker said the votes showed a lack of confidence in Page’s leadership.

“I think the voters spoke loud and clear last night,” she said.

Sam Page listens to a humorous remark made by Elder Shawntelle L. Fisher of the SoulFisher Ministries before he delivers the State of the County Address Wednesday, April 6, 2022, at the Touhill Performing Arts Center Mary Ann and Desmond Lee Theater, on the UMSL campus. Behind Page is his Chief of Staff Calvin Harris, left, and at right, Deanna Venker, Chief Administrative Officer of St. Louis County. Photo by Hillary Levin, hlevin@post-dispatch.com