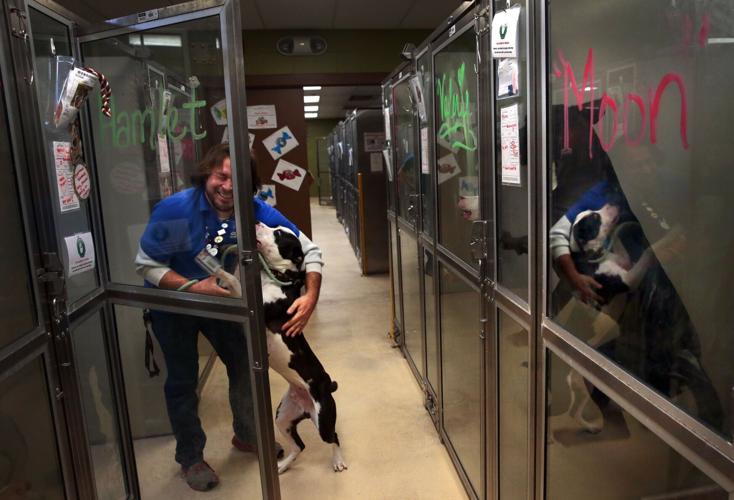 A St. Louis County Department of Public Health employee leashed a dog for a walk in November 2019 as county employees filled in for volunteers at the St. Louis County animal shelter and adoption center in Olivette. St. Louis County is working to move operation of the facility to the non-profit Animal Protective Association. 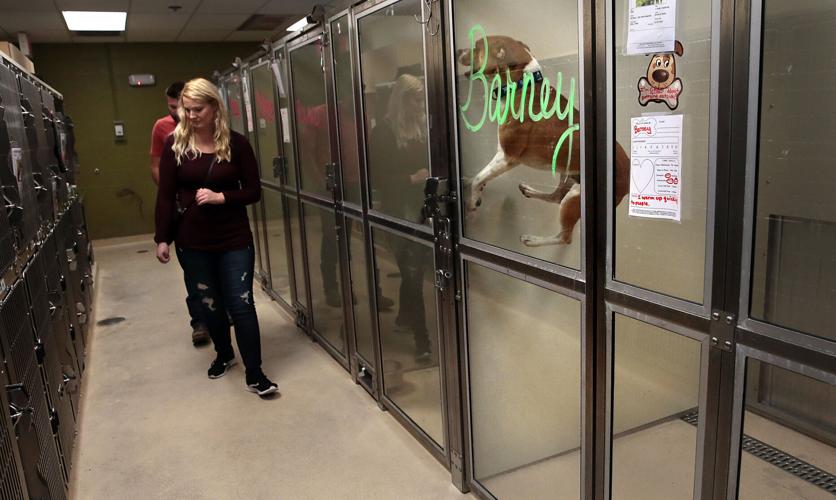 Barney, a mixed breed dog up for adoption, leaps for attention from visitors to the St. Louis County animal shelter and adoption center in Olivette on Sunday, Nov. 10, 2019.

The county wants to save as many animals as possible, said Kate Donaldson, deputy director of the county public health department, which oversees animal control. But the shelter has become a warehouse for dangerous dogs that aren’t fit for the community, leaving it unable to pick up strays unless they’ve bitten or attacked someone.

And the long stays are bad for the animals.

“It’s just not a good environment for those dogs to be in for a long time,” Donaldson said.

The change comes after a rocky period for the county’s animal control department and as a nonprofit organization is set to take over operations at the shelter.

The COVID-19 pandemic left many pet owners unable to care for their animals. County animal control, short on staff, space and money, has been operating in “emergency status” for more than a year. Some animal control officers have been asked to help out in the shelter when they’re needed on the street.

And because nonprofit shelters won’t keep dogs that bite or attack, a disproportionate number of dangerous dogs end up in government facilities.

“It’s incredibly challenging when you’re the shelter that gets all the aggressive dogs,” said Pam Walker, a former chief of the St. Louis city health department. “There really can’t be zero kills. It’s tragic, but the government seems to be the one that is saddled with that decision.”

The county shelter achieved no-kill status — which limits euthanasia to 10% of the population — under the its former director, Beth Vesco-Mock, who started in 2017. Former County Executive Steve Stenger fired Vesco-Mock just months later over complaints about her management and conditions at the shelter. An audit ordered by County Council later revealed the shelter had fudged kill rates, kept animals longer than necessary and couldn’t control infectious disease because of overcrowding.

In 2019, volunteers sued the county, alleging they were banned from the shelter for criticizing its conditions.

Last fall, the county began seeking a nonprofit to run and improve operations there and this spring awarded a five-year contract worth $15.8 million to the Animal Protective Association of Missouri, or APA, in a competitive bid process.

On Aug. 22, animal control staff began reviewing animals case-by-case to determine if they can be adopted or treated for illness, said health department spokeswoman Riane Cleveland. The department “must euthanize animals that are not fit for the community, are dangerous, severely sick or injured,” Cleveland said in an email.

The APA, which takes over this year, plans to run the shelter much like it does its flagship location in Brentwood, said CEO Sarah Javier. Though 97% of animals at the APA leave alive, well above the no-kill threshold, the organization doesn’t use that term. Javier said it incorrectly suggests there are zero kills at a shelter and implies there are organizations whose purpose is to kill animals.

At its Brentwood location, the organization uses a strategy called “socially conscious animal sheltering,” which assesses each animal individually for its needs. The goal is to find a safe, loving home for each animal, Javier said.

“We also want to make sure we are balancing the needs of the animal with the needs of a community,” Javier said. That could mean euthanizing dogs that aren’t safe to keep as pets.

The APA decides a dog isn’t safe for the community after a review by multiple experts. A veterinarian, the organization’s veterinary director and an expert in animal behavior would all assess the dog, according to Javier. They also give the dogs time to decompress once they come to the shelter because stress can exacerbate behavior problems. Sometimes a dog can thrive in a foster home or with an organization that specializes in dogs with behavior issues.

Some people who work at animal control will have to reapply for their jobs once the APA takes over, according to Cleveland, the health department spokeswoman.

The department has 64 positions in its annual budget for the shelter, and there are 26 vacancies. The county employs 17 animal control officers, including two supervisors. 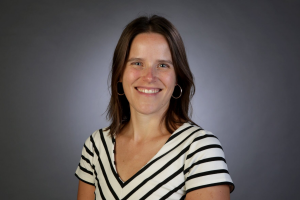 The director of an animal rescue and adoption group, days after taking over operations of the county animal shelter, on Thursday blasted the c…

A St. Louis County Department of Public Health employee leashed a dog for a walk in November 2019 as county employees filled in for volunteers at the St. Louis County animal shelter and adoption center in Olivette. St. Louis County is working to move operation of the facility to the non-profit Animal Protective Association.

Barney, a mixed breed dog up for adoption, leaps for attention from visitors to the St. Louis County animal shelter and adoption center in Olivette on Sunday, Nov. 10, 2019.