ST. LOUIS — Representatives of St. Louis, St. Louis County and the authority that owns The Dome at America’s Center have reached a tentative agreement dividing up the $519 million remaining in settlement money from the lawsuit over the NFL Rams’ relocation.

The city, where the Rams played their home games and which led the charge in 2015 to try and keep the team from moving to Los Angeles, would get the largest chunk of the settlement money: $250 million.

St. Louis County, which made annual payments on the Dome and was a plaintiff to the lawsuit against the NFL and Rams but did not join the ill-fated effort to build a new riverfront stadium, would get $169 million.

The Regional Convention and Sports Complex Authority (RSA), which owns the Dome and was the third plaintiff in the lawsuit, would get $70 million.

Another $30 million would go to the city to appropriate to the ongoing expansion of the America’s Center convention center downtown, which was running over budget due to soaring construction costs when the city and county issued bonds to begin construction earlier this year.

If the St. Louis Board of Aldermen does not appropriate the money toward the convention center expansion by June 30, then the $30 million would go back to the RSA.

Whether the agreement is ultimately approved now rests with the 11-member RSA board, which still needs to sign off on it. It is made up of three appointees each from the city and county and five state appointees. Mayor Jones, County Executive Sam Page and Gov. Mike Parson have all filled the board with their appointees.

City aldermen and the St. Louis County Council don’t need to give the agreement final approval. 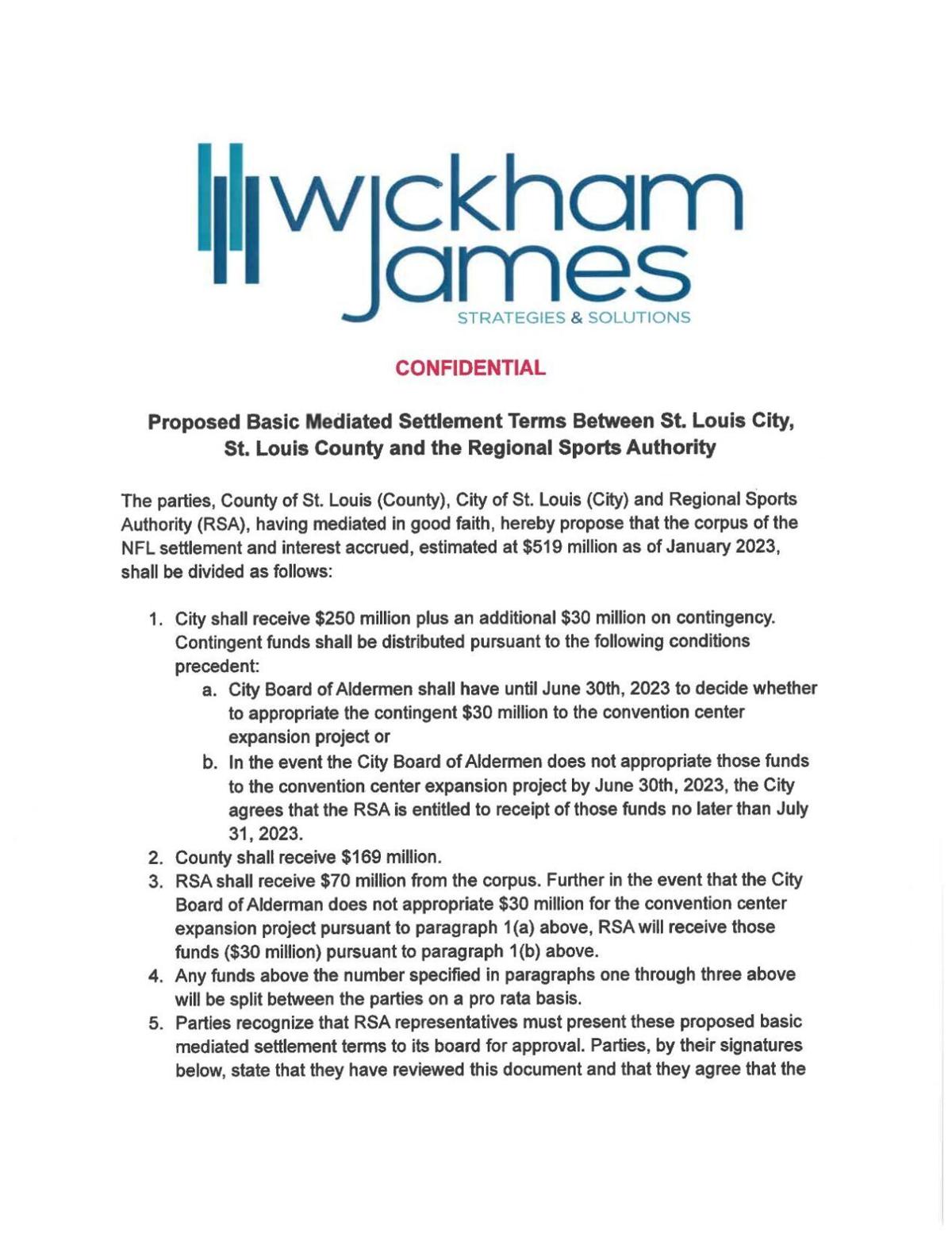 Some RSA members support investing the money in a trust fund-like structure and using the interest to fund projects in perpetuity.

City officials, however, have cited state restrictions on investing public funds that could limit the return the settlement money could receive from such a structure.

The proposed agreement comes as the one-year anniversary approaches of the $790 million settlement the NFL and Rams agreed to as the yearslong lawsuit over owner Stan Kroenke’s decision to move the team to Los Angeles threatened to put him and other NFL team owners through a public trial on unfriendly turf in St. Louis.

Attorneys at Dowd Bennett and Blitz Bardgett & Deutsch, the law firms who took the case, received over $275 million in attorney fees. The remaining $512 million for the three plaintiffs is expected to have grown to about $519.5 million by mid-January.

The lawsuit against the NFL and Rams and eventual settlement contained no guidelines for how the money should be divided up. The city was said to have argued for the largest share because of the loss in tax revenue from the actual football games and associated economic activity.

The RSA, for its part, depends on $4 million a year — half from Missouri and $1 million each from the city and county — to maintain the Dome under an agreement that expires in 2024. The settlement was seen as a way for it to maintain the Dome, which is used for events and conventions at the attached America’s Center, for the long-term.

The region’s business-backed economic development booster, Greater St. Louis Inc., in a statement Tuesday night urged the three jurisdictions to invest the money “with a boldness that transcends jurisdictional boundaries and drives inclusive growth across the metro.” Greater St. Louis had previously floated the idea of a long-term endowment as one way to maximize the settlement.

“We continue to believe that the three national models outlined in our recent white paper offer the best potential pathways to maximize the transformative potential of these one-time settlement proceeds,” Greater St. Louis CEO Jason Hall said in the statement. “These funds should be deployed in an intentional and strategic manner to drive inclusive and catalytic growth in the metro.”

What to do with the Rams money? St. Louis, St. Louis County officials start talking.

The scramble over $519 million in settlement money from the NFL entered a new phase Wednesday, the day after negotiators struck a tentative agreement on how to divide the money between.