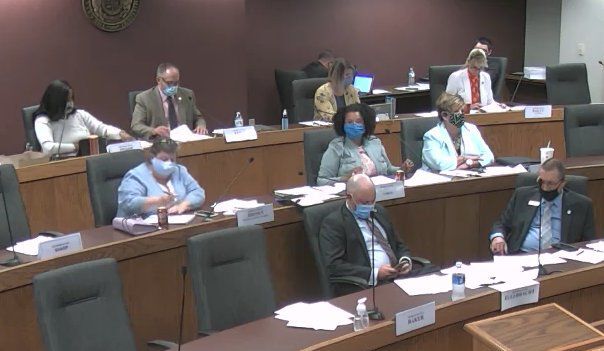 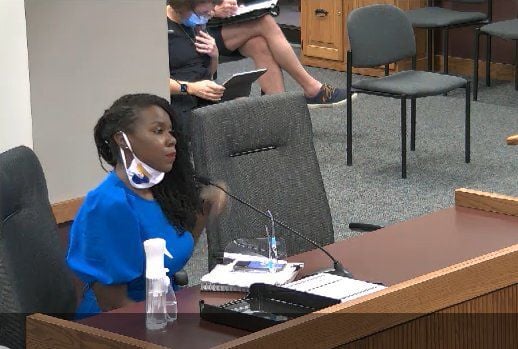 JEFFERSON CITY — State legislators in a joint committee hearing on Tuesday questioned the motives behind the plan for a half-cent sales tax to support early education in St. Louis County, and speculated that well-meaning early education advocates had been a front for hidden interests seeking to tap county tax revenues for a slush fund.

A proposal to put the tax plan on the Nov. 3 ballot was already dead in St. Louis County. Its sponsor, Council Chairwoman Lisa Clancy, announced Monday she was dropping it and the advocates she had worked with to develop it said they were regrouping.

But the legislators went ahead with their inquiry anyway. A 2½-hour hearing was marked by allegations by Rep. Maria Chappelle-Nadal, D-University City, and Rep. Dottie Bailey, R-Eureka, of corruption and political influence in the proposal.

Clancy, D-5th District, said later in a phone interview that she had “no words for how this is going down” and said she was disappointed that the state legislators did not use the discussion time to talk about supporting early childhood education. “The only goal here is to provide much needed resources to expand early childhood education quality and access here in St. Louis County,” she said.

The ballot question would have asked county voters if they wanted a half-cent sales tax to educate children up to age 5. A half-cent sales tax equated to $87 million in revenue in 2019, but would be on target for just $75 million to $80 million this year because of the economic downturn.

Clancy seemed to have the support of the council’s Democratic majority at first. But the bill did not spell out how the revenue would be used to lower the cost of child care, a stated priority of the campaign. Instead, it directed funds to land acquisition, wastewater treatment and other economic development projects in or outside of the county.

Emails discovered through a public records request show Clancy helped develop the proposal with early education advocates in the Ready By Five campaign, who asked her to shepherd the project through the government approval process. That sparked questions about why Clancy waited until the last minute to file the legislation, leaving minimal time for public input.

Councilman Tim Fitch, R-3rd District, who testified by phone on Tuesday, said “it looked like she thought she had the votes to get it through without a committee hearing.”

The bill stalled when Councilwoman Rita Heard Days, D-1st District, one of the bill co-sponsors, said shortly after its introduction that she no longer supported it. Clancy and the Ready By Five advocates could not bring her back on board.

On Tuesday, Chappelle-Nadal, accused prominent businesswoman Maxine Clark, Ready By Five’s treasurer, of having supported the research pointing to benefits of early childhood education with the ultimate goal of county tax dollars heading back to to her massive mixed-use Delmar DivINe development in the former St. Luke’s Hospital on Delmar Boulevard in the city of St. Louis.

“That must be sweet,” Chappelle-Nadal said, as if speaking to Clark. “That has to be really exciting that you can be on all sides of $84 million. Isn’t that awesome?”

Clark did not respond to a phone message and text from a reporter later Tuesday asking for a response. Clancy said she never saw any evidence of that.

Chappelle-Nadal and Bailey told two Ready By Five advocates who appeared at the hearing — Ready By Five campaign coordinator Gloria Nolan and Ellicia Lanier, executive director of University City-based Urban Sprouts Early Childhood Learning Center — that they believed the advocates were being used.

For their part, the advocates said they did not agree with some of the language in the final draft of the bill. Joey Saunders, director of policy and system change for WePower, a group that worked to support the Ready By Five campaign, said at the hearing Tuesday that the “original intentions have been warped by the political process which is why (the bill) is something we no longer support and it’s now dead.”

Chappelle-Nadal said she believed the county should have dedicated $50 million of its federal coronavirus relief money for early childhood education, instead of $6 million.

“The people that didn’t show up is who we are wanting to speak to and get to the bottom of it and figure out whose pocket this is actually going to line, because it’s not going to be yours,” Bailey told Nolan and Lanier, who, by this point, was in tears.

Rep. Raychel Proudie, chair of the House Special Committee on Urban Issues — who has relentlessly questioned and criticized Clancy’s proposal for two weeks — criticized the “cowardice” of Clancy and other elected officials for declining to participate. Clancy said she could not participate because she already had meetings sandwiched between two long council meetings, and she has not had child care options since the start of the pandemic.

Teacher union leaders and other public education advocates have questioned the Ready By Five campaign and Clark’s connections to education nonprofits and charter schools, which are publicly funded but privately run.

On July 20, Clark tweeted that plans for a second phase at Delmar DivINe include an early childhood center. Clark has been instrumental in bringing the national charter school network KIPP to St. Louis.

The first charter school in St. Louis County is set to open in 2021 in the Normandy school district.

Eric Scroggins, founder of The Opportunity Trust, said the organization and the new cooperative have no involvement with the Ready By Five campaign.

Another future tenant and “strategic partner” in Clark’s project is the nonprofit IFF, which wrote the “First Step to Equity” report which helped guide the Ready By Five policy recommendations. Robbyn Wahby, executive director of the Missouri Charter Public School Commission, serves on the IFF board of directors. Clark sits on IFF’s St. Louis advisory council.

Saunders, of WePower, said at the hearing that posts on social media claiming the proposed sales tax is aimed at charter school expansion are “conspiracy theories.”

Complaint filed against Galloway as governor’s race heats up

Arizona, Indiana and other states also have rejected the president’s offer

Explore St. Louis has laid off workers, furloughed employees and cuts its budget in the face of spiraling revenues