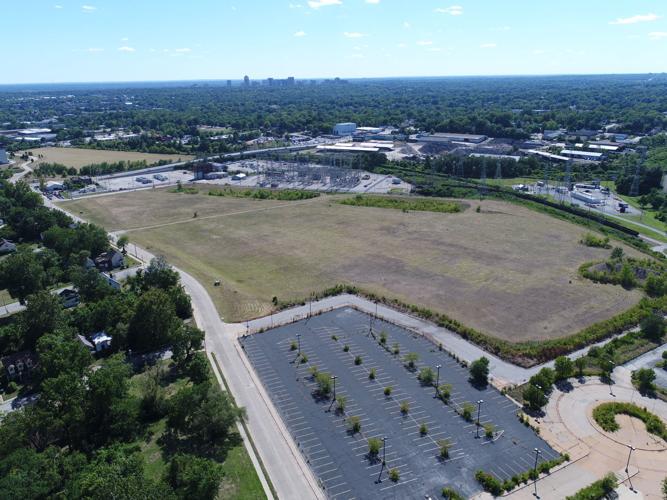 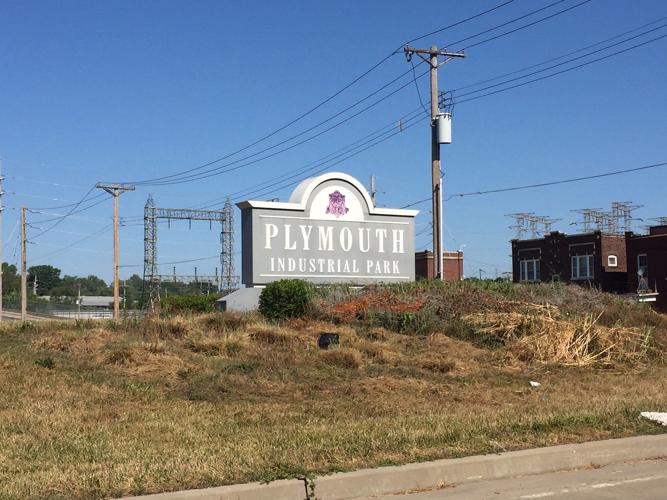 The entrance to the empty Plymouth Industrial Park on Page Avenue in Wellston. After 30 years, St. Louis County finally sold it, and the new owners say they are trying to find logistics and light industrial uses. (photo by Jacob Barker/Post-Dispatch)

For more than a decade, St. Louis County has waited for the right proposal to redevelop two industrial properties it owned in Wellston, hoping to bring some jobs to the downtrodden inner ring suburb.

It has taken even longer than that to get the sites prepared for redevelopment. For 30 years the county has owned the vacant 15-acre Wagner Electric site near Wellston’s MetroLink stop, now known as the Plymouth Industrial Park. In the mid-2000s, the county assembled 24 acres just across Page avenue from Plymouth into what is now known as the Wellston Industrial Park.

“I can’t believe somebody hasn’t bought it before now,” said Doug LaClair of LaClair Construction Services, one of the members of the investment group that bought them.

But the buyers aren’t sure yet when development will start or what will go there.

What is known is that St. Louis County’s Land Clearance for Redevelopment Authority, which owned the sites, sold both for far less than their appraised values. And two members of the investment group, John G. Rallo and Corey Christanell, have given more than $30,000 to St. Louis County Executive Steve Stenger, either personally or through companies linked to them.

“I don’t know anything about that,” LaClair said when asked about the contributions.

Rallo, said last week that it “was definitely a blighted area” but that the group was “attracted with what was going on around it with the MET (Metropolitan Education and Training Center),” a county-owned employment training facility that partners with a host of area organizations.

However, Rallo, in a brief phone interview, said there was “nothing solid” yet for the two sites.

LaClair said earlier this month he’s hoping to attract some light industrial or distribution companies to the sites.

“We’ve had a lot of activity but no one’s signed on the dotted line yet,” he said.

Katy Jamboretz, a spokeswoman for the St. Louis Economic Development Partnership, which staffs the LCRA, said Wellston Holdings was the high bidder on requests for proposals issued for the sites.

“We set a reserve price that reflected the fact that we had been trying to sell these industrial parks for more than 15 years,” Jamboretz wrote. “As an economic development organization, we viewed the millions of dollars that would be invested and hundreds of jobs created as a major benefit to the community.”

LaClair, though, characterized the county LCRA and Economic Development Partnership’s marketing of the sites as lacking.

“They haven’t done anything,” he said. “We’re marketing the snot out of it.”

Stenger, who has the power to appoint a majority of board members to the Economic Development Partnership, said he had no involvement in the decision on the Wellston properties.

“It is my understanding that the Wellston properties were awarded to the highest bidder,” Stenger said in a statement. “I applaud the efforts of those willing to take a risk for the betterment of our community.”

Months before the Wellston deals closed, an entity controlled by the Economic Development Partnership lent a company registered to Rallo almost $500,000.

Rallo’s company had already purchased the building at 1201 North Warson Road for $1.1 million, according to county real estate records. A September deed of trust between North Warson Partners and St. Louis Bank lists the building as collateral for a $1.08 million loan.

On Jan. 31, the same day of the deed of trust between Rallo and the Economic Development Partnership, Rallo and St. Louis Bank executed a modification of their deed of trust. The modification described in that document: “Principal decrease to $600,000.”

“It would be unusual to make an investment of this size without a commitment of substantial reinvestment in the property and job creation,” said Denny Coleman, who led the Economic Development Partnership and its predecessor, the St. Louis County Economic Council, for more than 20 years.

One of the Wellston properties was under contract at the time of the loan. The county LCRA board had approved an agreement with Wellston Holdings in October for the Plymouth Industrial Park. By December, the LCRA entered into an option agreement giving the company 120 days to exercise.

Wellston Holdings exercised its option for Plymouth Industrial on March 3, and the sale closed June 1. A purchase agreement for Wellston Industrial Park was reached in May, and that sale closed earlier this month.

Asked about the reason for the loan, Jamboretz said STL Partnership CDC, a separate organization, made the loan. “The CDC has its own loan review and credit approval process for all the applicants each year looking to it for small business loans,” she said.

“It has a loan review committee that is made up of bankers and financial services professionals,” she added. “It doesn’t have any appointees on it.”

The STL Partnership CDC is staffed by Economic Development Partnership officials. Judy Cromer, a vice president at the partnership, is listed as the CDC’s president.

Wellston Holdings, the company that now owns the industrial parks, registered with the secretary of state’s office shortly after North Warson Partners bought the Creve Coeur building. It lists its address at the North Warson Road building in registration documents filed with the state.

So does a company registered to Christanell: 3Gems Nutrition. It has a website promoting a product called Boss Nutrients Heavy Boost. It appears to be a sort of plant nutrient, and the Facebook page for Boss Nutrients makes references to marijuana horticulture. Websites Stuff Stoners Like and Herb promote the Boss Nutrients and Heavy Boost for better marijuana growth.

A website for a company registered to Rallo, B&B Packaging Group LLC, has little product information. But it does promote the Heavy Boost plant enhancer on its products page.

After being reached last week, Rallo said he would call back but indicated he was with people for a meeting. He has not returned follow-up calls. Christanell, a former Anheuser-Busch executive according to his LinkedIn profile, did not respond to messages sent to an email listed for him with the secretary of state.

Christanell gave a lump $10,000 donation to Stenger in 2016, and he followed up with two contributions totaling $5,000 this year. The company he lists as his occupation, Brentwood Capital Partners, gave $2,500 to Stenger this year and $3,000 last year.

Stenger’s statement distanced himself from the actions of entities staffed by the Economic Development Partnership.

“Neither the County nor I have authority over the loan committee and the suggestion that the County or I somehow manipulated the purchase of two vacant dilapidated properties in Wellston and a loan approved by an independent board in exchange for a campaign contribution is nonsensical,” Stenger said.

While the first Wellston property sold in early June, Economic Development Partnership officials did not say anything publicly about the deal until late last week, after the Post-Dispatch began asking questions and sent in a records request.

In a press release received by the Post-Dispatch Friday morning, the Economic Development Partnership touted the sale of the properties, saying private developers have announced $87.5 million in redevelopment that will result in 600 jobs in logistics, warehousing and other industrial uses on the two properties.

“Real progress is being made in Wellston in increasing economic opportunities for working families,” Sheila Sweeney, chief executive of the Economic Development Partnership, said in the release. “These strategic investments will promote the long-term success of Wellston and the greater North County region.”

Iceland-based Wow Air faces a rigorous compliance process imposed by St. Louis city and county economic development agencies to justify the nearly $1.2 million in incentives that lured the airline to St. Louis Lambert International Airport. Taxpayers have a right to know that public money used to promote business growth actually winds up yielding the promised benefits. If only all deals received that same focus.

Promoters of Missourians for Patient Care don't want voters to know who is backing effort to legalize medical marijuana.

St. Louis County board has 'huge issues' with car lot proposal on land it sold to Stenger donors

A St. Louis County Economic Development Agency had sold 28 acres in Wellston that it had prepped for development to investors who wanted to flip it for a car lot.

St. Louis County Executive Steve Stenger had denied any involvement in the sale of land owned by a county development arm to his campaign donors.

Osborn's move to distance herself from Partnership board follows its vote to oust former CEO Sheila Sweeney. The Partnership's CFO and chief spokeswoman are leaving, too.

"I am profoundly sorry for my actions and my inactions," Sweeney, her voice trembling, said in court on Friday.

A lawyer for St. Louis County Executive Steve Stenger’s chief of staff, Bill Miller, says he should get probation. Federal prosecutors want 15 to 21 months in prison.

The St. Louis County Land Clearance for Redevelopment Authority has been working for months to buy back the property it sold in 2017 to a group led by John Rallo, who was sentenced to 17 months in prison last week.

But the St. Louis Economic Development Partnership CEO Rodney Crim offered few details on the next steps for the land.

Page revamps county board that owns more than 150 Wellston properties

"I'm excited about the new future of the LCRA and its partnership with the city of Wellston," said Wellston Mayor Nate Griffin.

The entrance to the empty Plymouth Industrial Park on Page Avenue in Wellston. After 30 years, St. Louis County finally sold it, and the new owners say they are trying to find logistics and light industrial uses. (photo by Jacob Barker/Post-Dispatch)