JEFFERSON CITY — Missouri lawmakers ended a contentious legislative session Friday having spent much of their five months in the Capitol fighting over the boundaries for the state’s new congressional maps.

Along the way they managed to pass a massive $49 billion budget that includes more money to pay teachers, billions of dollars in brick-and-mortar projects and full funding to cover an expanded population of Medicaid recipients.

And despite Republican infighting, Senate leaders managed to navigate a politically tricky landscape to help secure GOP priorities like changes in election laws, tax rebate checks worth up to $500 and a funding stream for charter schools.

In the final vote of the Senate’s session on Thursday night, Republicans rammed a congressional map through the chamber and adjourned for the summer, leaving the House to do mop-up duty on Friday.

“It wasn’t pretty. But the job is over and we got it done,” said Senate President Dave Schatz, R-Sullivan.

“We knew this one was going to be tough,” said Senate Majority Leader Caleb Rowden, R-Columbia. “It’s no secret that this place was ugly at times, difficult to watch sometimes. There were days when I went home, frankly, embarrassed.”

The 2022 post-pandemic session was mostly defined by a bitter Republican rift over new congressional maps, which are required to be redrawn every 10 years to adjust for changes in population.

Although Republicans control both chambers of the Missouri Legislature, a splinter group of Senate hardliners called the “Conservative Caucus” blocked passage of a map for two months, arguing the state’s right-leaning electorate deserved to have seven of its eight congressional districts be drawn to favor GOP candidates.

Sen. Bob Onder, R-Lake Saint Louis, said the hard-liner bloc was at a disadvantage from the beginning after leaders in the House and Senate coalesced around a tentative outline for a map.

“The fix was in,” said Onder, who spent hours on the floor arguing in favor of a 7-1 map.

The impasse held up most business in the Senate for much of the session, frustrating members of the House who were counting on their counterparts to help them pass election-friendly legislation heading toward the 2022 campaign season.

“Of course we didn’t accomplish some of the things we wanted to,” said House Speaker Rob Vescovo, R-Arnold, who is term-limited and won’t be back next year. “I was disappointed they adjourned.”

House Majority Leader Dean Plocher, R-Des Peres, said the Senate’s behavior resulted in the demise of some key priorities, including making it harder for Missourians to change the constitution.

“What goes on the other side of the building, I can’t control,” said Plocher, who will be speaker next year.

The confluence of the conservative splinter group, the congressional maps and election-year jockeying conspired to keep action in the upper chamber largely limited to the final four weeks of the session.

Lawmakers entered the final week of their annual, five-month-long legislative session having sent only four non-budget bills to the governor’s desk.

None of those four would be considered high-profile legislation. One would loosen regulations on people who operate businesses out of their homes. Another would change laws regarding automobile dealers.

By week’s end, the total number had grown to more than three dozen via the passage of a number of priorities, including a charter school deal that will boost state funding to the schools.

The House and Senate also approved a series of farm-related tax credits and put in place new rules regarding the use of eminent domain by utility companies.

Lawmakers were unable to tackle a raft of issues, including sports betting, ridding the state of illegal slot machines and legalizing recreational marijuana.

They made no significant changes to the state’s already restrictive abortion laws and did not join with other Red states in pushing hot-button election issues such as critical race theory and transgender youths playing sports.

There also were antics and tantrums that ate up valuable time.

In February, Sen. Mike Moon, R-Ash Grove, was temporarily stripped of his committee assignments for wearing bib overalls on the Senate floor. Schatz, the Senate leader, said it was a breach of protocol to not wear a suit in the chamber.

Moon said he’d been cooking pancakes for constituents in the morning and forgot to change before the day’s session began.

On Thursday, the day before adjournment, Moon bemoaned the lack of action in the Senate, even though he participated in filibusters over the maps that gobbled up hours of debate time and derailed various bills.

That drew a rebuke from Sen. Jeanie Riddle, R-Mokane.

“You know how frustrating that is, senator, when all of us have work to accomplish?” Riddle told him. “There are consequences to long-term filibusters.”

“It wasn’t my intent to rub people the wrong way,” said Moon, who is a candidate for congressional seat in southwest Missouri.

“The person who has the most time wasted on the floor, you are the champion,” Schatz said.

The tensions extended into the legislative process. A proposal to extend postpartum care for low-income women to a full year after they’ve given birth failed to cross the finish line amid resistance by the splinter Republicans.

The measure, which had support from Democrat and Republican lawmakers, would have expanded health care coverage from its current cap of 60 days.

It had been part of a bill that also included provisions to decriminalize needle exchange programs and start a prison nursery program.

Onder vowed to kill the measure because it represents an expansion of the Medicaid health insurance program. Sen. Denny Hoskins, R-Warrensburg, said he worried that the needle exchange would encourage drug use.

The measure was sponsored by Sen. Holly Thompson Rehder, R-Sikeston, who had held a news conference earlier in the session to urge the conservatives to end their legislative blockade.

As the session ground to a stop, Rehder slammed the conservative faction, saying they were “pompous” and “pathetic” for blocking one of her top priorities.

“She’s mad because her needle exchange bill did not get across the finish line,” Hoskins said.

House Minority Leader Crystal Quade, D-Springfield, decried the delays in map-making in the Senate and budgeting in the House.

“This is not how you responsibly govern,” Quade told reporters after the House adjourned Friday.

Quade also said the push by Republicans to pass laws on issues such as critical race theory and transgender youth were a distraction.

“None of this helps to improve Missouri. But it does help to win elections,” Quade said.

Budget a bright spot for most lawmakers

The state’s new $49 billion budget may end up making up for the policy shortfalls elsewhere in the end-of-session roundup.

With billions of dollars in federal emergency pandemic aid and robust growth in state tax revenues, lawmakers were able to approve a spending plan for the fiscal year beginning July 1 that contains boosts to education, colleges and universities, social services and economic development.

Tax rebates also are headed to Missourians. As part of the budget deal, taxpayers will get rebates worth up to $500, or $1,000 per couple.

Funds from the federal American Rescue Plan Act will help fuel $50 million in spending on projects in north St. Louis County, including demolition of the shuttered Jamestown Mall and the reconfiguration of the University of Missouri-St. Louis campus.

“This funding will not only foster public-private partnerships and spur economic growth, but this investment in our community will have a positive, once-in-a-generation impact on those who call North County home,” said Sen. Brian Williams, D-University City. “I appreciate the collaborative efforts between my constituents, stakeholders and county leaders who helped advocate for this opportunity to improve our community.”

“This funding is crucial to safely demolish the building and redevelop that area into a place that everyone in our community can enjoy. I am looking forward to this revitalization of North County,” Mosley said.

The budget also contains matching dollars for a new law enforcement facility in St. Louis County, as well as a boost for mass transit programs.

Here’s what the Missouri Legislature accomplished this session

Scenes from the last day of Missouri's legislative session

St. Louis could lose $150 million in earnings taxes to people working from home

The city could be forced, if a recent court ruling stands, to refund between $25 million and $50 million per year in earnings taxes charged to nonresidents who started working from home during the pandemic, according to the St. Louis tax collector's office.

Special prosecutor for St. Louis crimes and a gun law for minors are on the table in Jeff City

A special prosecutor appointed by the governor could handle St. Louis murder cases under legislation under consideration in the Missouri House.

Cool Valley aldermen are trying to remove Mayor Jayson Stewart, alleging he's misusing money. He once promised to give every resident $1,000 in Bitcoin.

Missouri is home to the most dog breeders in the U.S.

Cool Valley mayor "retires from politics" via email, but impeachment hearing proceeds without him.

Voters in St. Louis County and 35 county municipalities will decide on the April 4 ballot whether to put a 3% tax recreational marijuana sales.

The ACLU said at least 27 anti-LGBTQ bills have already been introduced by Missouri Republicans, as of Jan. 12, accounting for roughly 21% of legislation introduced nationwide in state legislatures that target the community.

Voters to decide Manchester annexation in battle with Sam Page

The St. Louis Boundary Commission is expected to finalize details tonight for Manchester to ask voters to approve the annexation in November, following an eight-month review process.

He was appointed to the job by Gov. Mike Parson after Eric Schmitt was elected to the U.S. Senate. 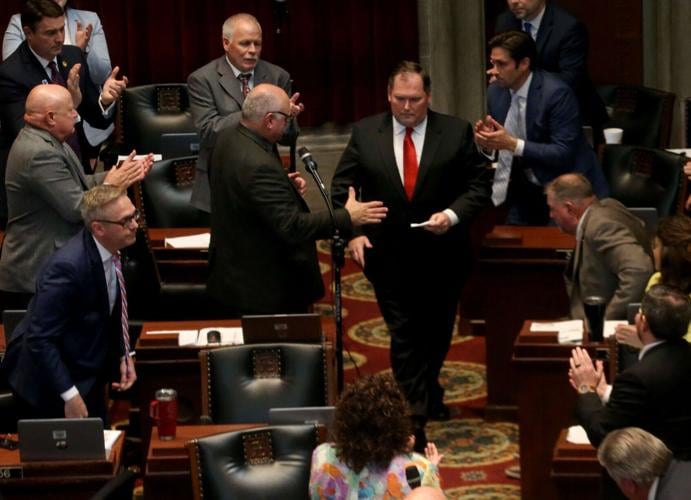 Representatives applaud House Speaker Rob Vescovo, R-Arnold, in red tie, after Vescovo delivered his final remarks to lawmakers on the last day of the legislative session on Friday, May 13, 2022, on the House floor in Jefferson City. Vescovo has reached his term limit. Photo by Laurie Skrivan, lskrivan@post-dispatch.com 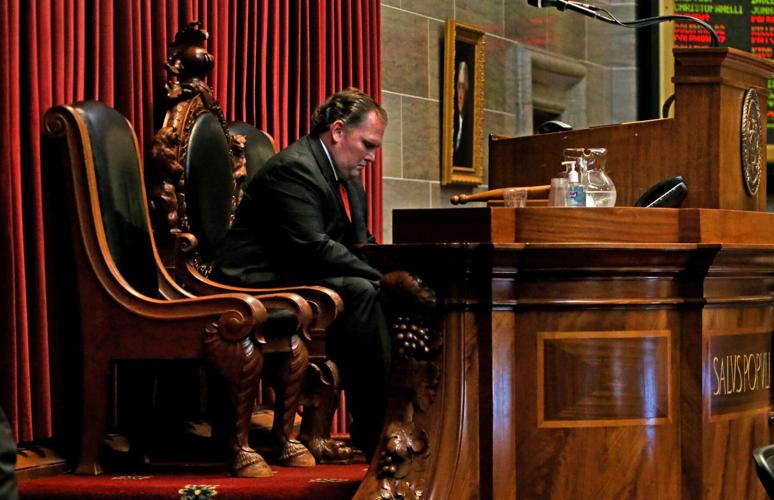 House Speaker Rob Vescovo, R-Arnold, sits behind the dais during the last day of the legislative session on Friday, May 13, 2022, on the House floor in Jefferson City. Vescovo has reached the end of his term. Photo by Laurie Skrivan, lskrivan@post-dispatch.com 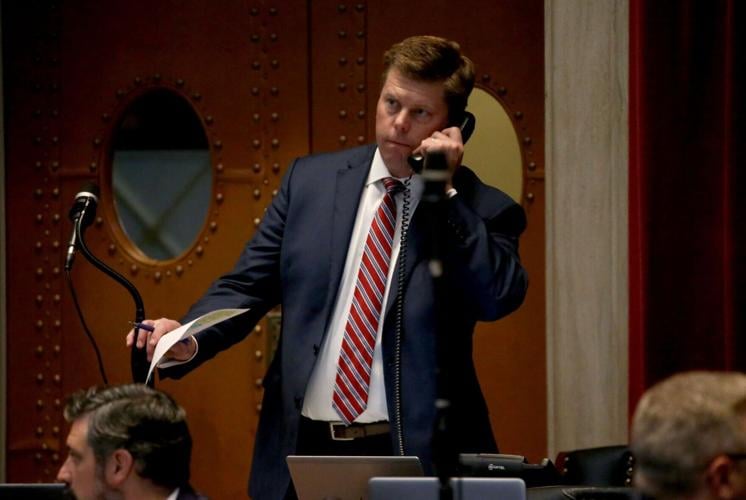 Missouri's House Majority Leader Dean Plocher, R-Des Peres, during last day of the legislative session on Friday, May 13, 2022, on the House floor in Jefferson City.