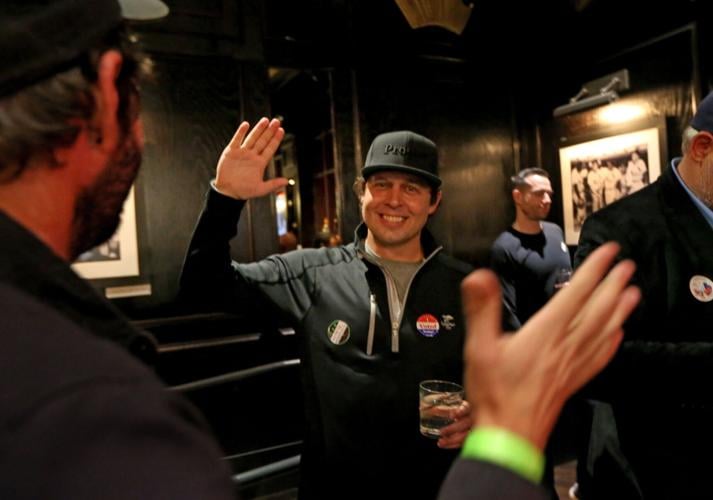 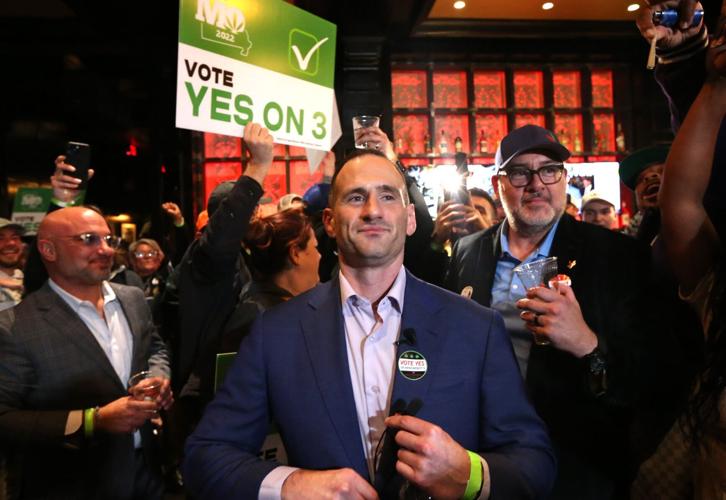 “We made history,” said John Payne, center, campaign director for the group Legal MO 2022, as he and other supporters celebrate passage of Amendment 3 to legalize recreational marijuana in Missouri, during an election night watch party on Tuesday, Nov. 8, 2022, at Ballpark Village.

JEFFERSON CITY — Deep red Missouri is joining 20 other states that have legalized marijuana sales for adult use after Tuesday’s election.

Like the approval of Medicaid expansion in 2020 and the rejection of an anti-union right-to-work initiative in 2018, the win serves as another example of the state’s voters backing progressive issues, while putting conservative Republicans in office.

“I think what a lot of people fail to appreciate is that voters fundamentally view candidate races different than they do ballot initiatives,” said Jack Cardetti, a former aide to Democratic Gov. Jay Nixon who helped run the pro-pot campaign.

He said voters put aside the tribal view of political parties when faced with questions on the ballot that could affect them personally.

“In effect, ballot initiatives are the most direct form of democracy and that’s a good thing,” Cardetti added.

In all, there were five states Tuesday that asked voters whether they desire legalization.

Along with Missouri, Maryland voters said “yes,” but similar measures were defeated in Arkansas, North Dakota and South Dakota.

Adult-use legalization laws have now been adopted in 21 states, the District of Columbia and two U.S. territories, while an additional 16 states and two territories have legalized cannabis for medical use.

In Missouri, passage of the initiative crossed party lines.

Overall, the question in Missouri received 53% of the vote, according to unofficial tallies.

For some supporters in the St. Louis area, the question came down to the simple equation that if Illinois is selling legal weed, why not Missouri?

“Why should we have to go to the other side of the river? It’s time,” said Donna Sailor, 75, who attended an election night watch party at Ballpark Village on Tuesday.

In GOP-dominant St. Charles County, 55% of the voters favored legalization. Voters in Jefferson County, which has trended strongly red, voted “yes” 55% of the time.

Smaller counties chipped in to the winning tally. New Madrid County, in the state’s Bootheel region, saw 54% of its voters backing the measure. It won 51% of the vote in rural St. Francois County.

The victory came after the measure squeaked through the qualification process.

A lawsuit arguing Ashcroft’s decision was flawed failed to stop it.

In much of the state, rural Republican voters sided with opponents, who included the Missouri Republican Party, as well as local GOP state lawmakers.

While the medical pot industry shoveled more than $7 million into their campaign, opponents stitched together an unfunded, grassroots campaign to kill the amendment.

When the results became clear, Eapen Thampy, a pro-pot lobbyist who opposed the amendment, blamed the outcome on those dollars.

“Well it looks like the out-of-state marijuana companies bought an election and passed the corrupt Amendment 3 proposal that institutionalizes marijuana crimes and monopolies in the Missouri Constitution,” he tweeted Tuesday night.

Although pot will be legal, there will be limitations on possession. For nonmedical marijuana patients, the limit would be 3 ounces, while medical patients would be able to possess up to 6.

Additionally, fines could still be issued for smoking in public.

The amendment also includes a process for people to cleanse their court records for past cannabis-related convictions.

Someone currently on probation or parole for certain marijuana law violations, for example, would see their sentence automatically vacated and later expunged from their record.

And anyone incarcerated for certain marijuana offenses would be able to petition the court to vacate the sentence, as well as be immediately released from incarceration with their records expunged.

The state’s judicial branch has requested $4.5 million to help fund the expungement process at the local level.

Cardetti said the expungement model outlined in the amendment was a key reason it received support across party lines. In addition, he said it could become a model for other states seeking to legalize marijuana use.

Missouri cannabis industry is booming, but profits are hard to find

Legal marijuana in Missouri: 10 questions and answers about Amendment 3

The proposed amendment — a 39-page document of definitions, rules and regulations — is condensed to fewer than 150 words on the ballot.

Doctors warn of health effects of legalizing marijuana in Missouri

Legalization of recreational marijuana for adults will likely promote increased use by adolescents, some health experts warn. But Amendment 3 supporters say the measure includes safeguards.

Marijuana legalization promises jobs in Missouri. But how many?

If Missouri voters legalize pot for recreational use, some local cannabis businesses say their workforce would increase, or even double.

Area manufacturers, schools, financial institutions and health care providers riddled lawyers with inquiries last week, in the wake of the passage of Amendment 3. Employers were left to ponder: What do they need — or want — to know about their employees' after-hours cannabis use?

Gay marriage is legal in Missouri, despite a 2004 constitutional amendment that banned it.

“We made history,” said John Payne, center, campaign director for the group Legal MO 2022, as he and other supporters celebrate passage of Amendment 3 to legalize recreational marijuana in Missouri, during an election night watch party on Tuesday, Nov. 8, 2022, at Ballpark Village.