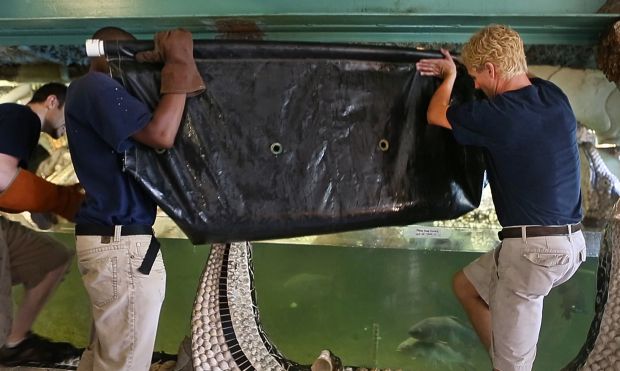 Jordan Dinwiddie, left, and Christopher Hancock, place a White Sturgeon into the World Aquarium's Mississippi River exhibit at City Museum on Tuesday, July 8, 2014. The sturgeon is one of three that were donated by the Niagara Aquarium in New York. Photo by Cristina Fletes-Boutte, cfletes-boutte@post-dispatch.com 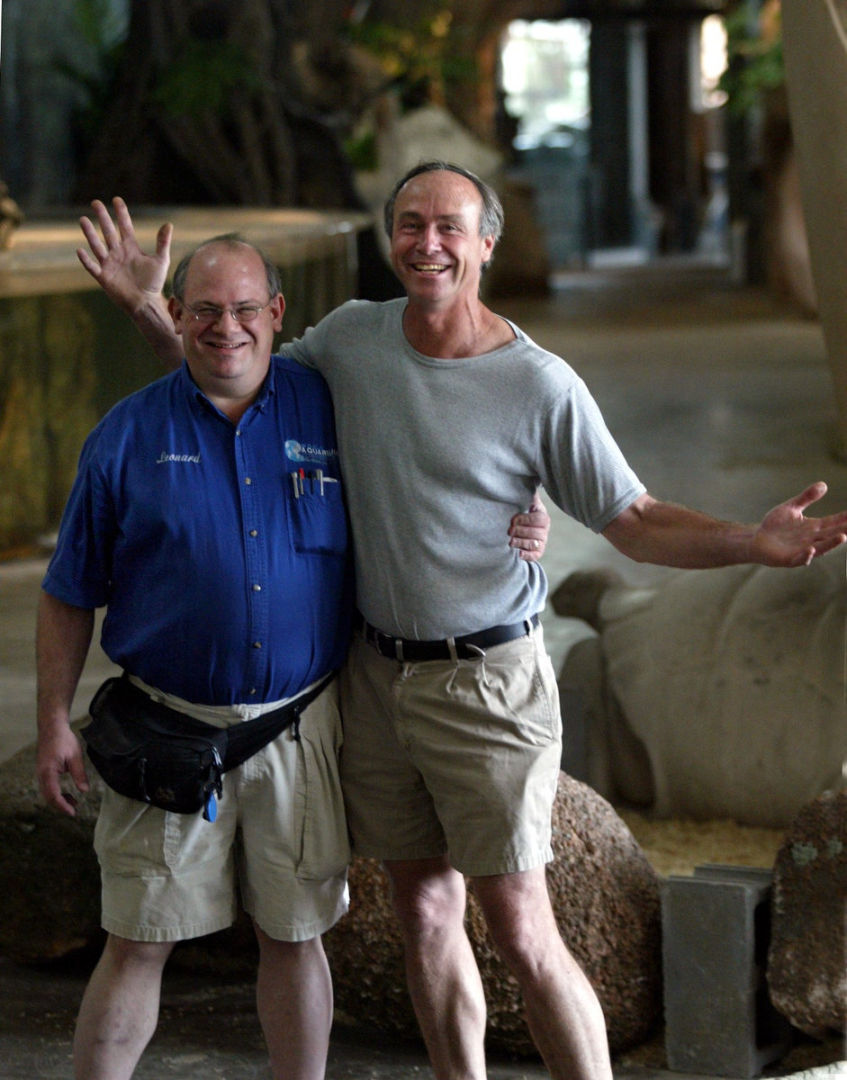 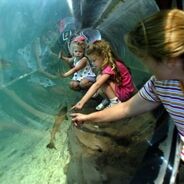 Shark Tube at the World Aquarium

ST. LOUIS • The World Aquarium, a nonprofit aquarium tucked inside downtown’s City Museum, has been cited for a series of violations stemming from poor sanitation, murky water and unfed animals.

The aquarium houses more than 40 mammals, and hundreds of fish, birds, reptiles and amphibians, according to the USDA. The nonprofit opened last decade in leased space at City Museum, a popular tourist attraction downtown. The aquarium previously had been situated in the Hanley Industrial Court in St. Louis County.

Inspections had turned up few if any violations in recent years. The aquarium passed an inspection in November with zero violations, according to USDA records. But when Owens arrived Feb. 18, she found a litany of problems ranging from “numerous empty food bowls, contaminated water receptacles, apparent failure to spot clean, filled litter boxes, and general lack of cleaning throughout the facility.”

On Monday, Rick Erwin, the executive director of the City Museum, said the museum had asked the World Aquarium to vacate the second-floor space.

“It started last year with them being behind on rent, then it sort of escalated,” Erwin said. “We have standards that we’d like to see for the World Aquarium. We want to make sure those animals are safe and that they go to a good space.”

Erwin said the museum had received complaints over the last few months that the animals were going unfed. He said the aquarium’s operator, Leonard Sonnenschein, assured them everything was fine.

“We’ve had issues with employees and their behavior,” Sonnenschein said Monday. “They are no longer here.”

Sonnenschein said all of the problems cited by the USDA had been addressed.

“Some of the stuff they found was immediately taken care of,” Sonnenschein said. “Sometimes the animals eat all of their food and we aren’t right there to replace it.”

Sonnenschein said City Museum hadn’t lived up to its requirements in a lease, and said they hadn’t maintained certain things.

“City Museum wants the aquarium to leave,” Sonnenschein said. “They are doing things that are inhospitable to make us leave.”

The USDA report depicted an understaffed, dusty environment to the detriment of the fish and animals who live there.

The report highlighted the death of an anteater over the Christmas holiday. It alleged that aquarium operators knew the anteater, which had been taken off display, was sick, but didn’t provide adequate veterinarian care. A necropsy showed it died of renal failure.

“The animal should have been examined by a veterinarian as soon as it was discovered to be so ill so its painful condition could have been managed appropriately,” Owens wrote in the report.

A caretaker believed the animal was dehydrated. It was given a saline treatment but was never examined by a veterinarian.

“There was also evidence that generalized cleaning in the building was not occurring,” Owens wrote.

In an area called “the Jungle,” the inspector found frozen drain pipes and a pool with water that had not been drained or replaced in 11 days.

“In ‘the Jungle,’ all the feces from the sloth and kinkajou from the past 11 days was hosed into the pool and there was thick, brown sediment covering the entire bottom,” the report stated.

The World Aquarium advertises its chief mission as “to present, promote and protect the world of water.”

The cleanliness issue was partly attributed to the lack of a janitor. At the time of inspection, a person who had cleaned the facility four days a week was no longer employed there — and no one had been hired to do that job.

Sonnenschein said that the animals were being fed and that the facility had hired two additional employees to take care of them.

Earlier this month, the aquarium hosted an “adult night” party advertised “in the spirit of Bob Cassilly,” the late founder of the City Museum who helped bring the aquarium to the downtown facility.

Now, the museum said it hoped the aquarium vacated the space by August.

Sonnenschein said the aquarium was actively looking for a new home.

President said he expects to open in a new location sometime after Labor Day.

Sonnenschein is also working on plans to build a $25 million, 70,000-square-foot aquarium just south of the Gateway Arch by the summer of 2017.

Jordan Dinwiddie, left, and Christopher Hancock, place a White Sturgeon into the World Aquarium's Mississippi River exhibit at City Museum on Tuesday, July 8, 2014. The sturgeon is one of three that were donated by the Niagara Aquarium in New York. Photo by Cristina Fletes-Boutte, cfletes-boutte@post-dispatch.com

Shark Tube at the World Aquarium