How the feds discovered that Martin Luther King's killer was a small-time St. Louis robber
0 comments
Share this
{{featured_button_text}}
By Tim O'Neil

ST. LOUIS • He was a two-bit felon doing 20 years for robbery when he escaped from the Missouri State Penitentiary in a bread truck. The exploit made a small headline and was forgotten.

Roughly one year later, the Rev. Dr. Martin Luther King Jr. was murdered on a motel balcony in Memphis on April 4, 1968. Investigators found fingerprints in a rooming house across the street and on an abandoned Remington rifle.

On April 19, the FBI announced it had scanned 53,000 prints and made a hit — the three-time loser who had escaped on the truck in Jefferson City.

A worldwide search was on for James Earl Ray, 40, a drifter who was born in Alton and spent pieces of his disjointed life in St. Louis. In 1959, he and an accomplice grabbed $190 in an armed robbery of a Kroger store at 3417 Ohio Avenue. Ray was arrested 20 minutes later at his apartment across from Lafayette Park.

Ray had been in trouble since the sixth grade, when he stole school lunch money in Ewing, Mo., where his impoverished family lived for a time. He dropped out of the ninth grade, was booted from the Army and arrested for a burglary in East Alton because he had lost his shoes at the scene. Not the savviest criminal, he once tumbled out of a getaway car during a tight turn. He did time in Kansas and Illinois before returning to St. Louis in August 1959. He robbed the store two months later and drew the 20.

His escape from the Missouri prison — his third try — took place on April 23, 1967. He was known inside as a racist, but there was nothing special about his hatred.

Scotland Yard detectives arrested Ray in London seven weeks after the FBI bulletin. He had used aliases and robbery to stay on the lam.

Ray's lack of distinction made it hard for many Americans to believe he could murder someone like King and get away all by himself. Conspiracy theories have lingered ever since. Ray fed the frenzy by pleading guilty of King's murder, taking a 99-year sentence and then quickly trying to recant.

There were claims of government cover-up and Mafia connections. One tale was of two segregationists from Imperial who put up $50,000 to murder King. The contract supposedly reached Ray by way of his brother's saloon, the Grapevine Tavern, 1982 Arsenal Street. Conveniently, the alleged money men already were dead.

Some members of King's family later said they didn't believe Ray was the killer. But numerous courts affirmed his conviction. Ray died a prisoner in Nashville, Tenn., in 1998 at age 70. In 2000, the U.S. Justice Department concluded again that Ray had acted alone.

The night Washington U. became a flashpoint in the Vietnam War protests

Hours after news of Kent State, on May 4, 1970, a gathering on the Washington U. campus quadrangle turned surly.

May 5, 2009: Three murders mark the start of the Christopher Coleman case

On May 5, 2009, Christopher Coleman called police to have them check on his family's welfare. Officers found his wife, Sheri, and their two young sons dead inside. Ultimately, Coleman would be charged and convicted in their strangulation murders 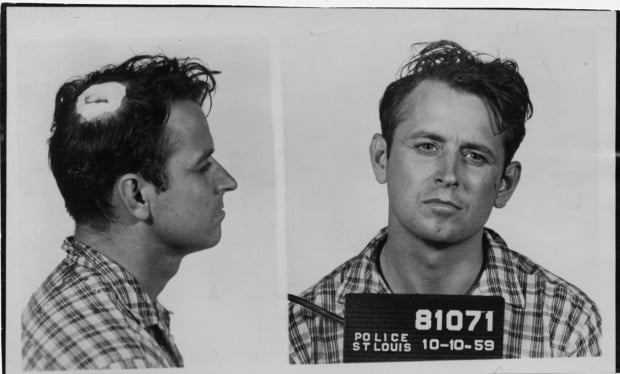 Police mug shots of James Earl Ray, 31, after his arrest Oct. 10, 1959, in the armed robbery of a Kroger Store at 3417 Ohio Avenue. Officers arrested Ray a short time later at his apartment building near Lafayette Park. One of the officers said he had to strike Ray on the head with his service revolver during a scuffle in a hallway. (Post-Dispatch) 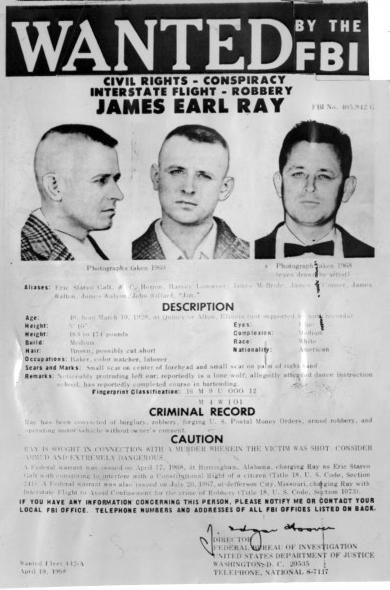 An FBI wanted poster issued for James Earl Ray, including photographs of him taken in 1960 and, on the right, a doctored version of what he might have looked like in 1968. (Post-Dispatch) 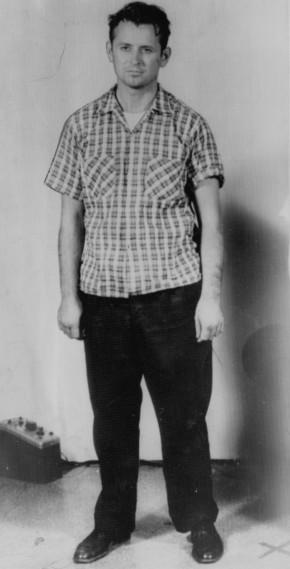 A photo of James Earl Ray after his arrest for the Kroger robbery in 1959. The St. Louis Police Department released it on April 19, 1968, when the FBI named Ray its suspect in the murder of the Rev. Dr. Martin Luther King Jr. two weeks before in Memphis. (The Associated Press)