The front page of the July 10, 1898, edition of the St. Louis Post Dispatch featured the story of Kirby May, the tramp who posed as a girl and victimized hundreds of wife hunters. But inside that edition on Page 4 was the story of the first person in St. Louis to own an "Auto-Mobile." Here is our account of that ride with Dr. I. Griswold Comstock. 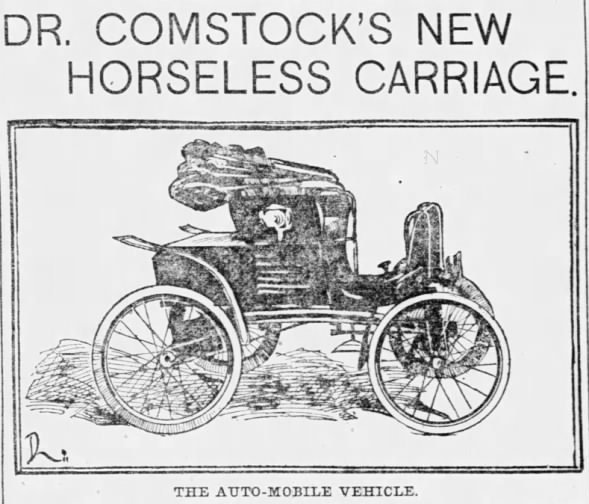 Dr. I. Griswold Comstock is the owner of the first Auto-Mobile vehicle in St. Louis. He recently purchased it at a cost of $3,000.

It has the appearance of a "Spider" with the exception of the wheels, which are only trifle larger than those of a safety bicycle, and the tires are of the pneumatic variety used on the bicycle.

As the Auto vehicle sped up the street yesterday with the writer inside, he had the peculiar feeling that he would run into every thing on the road and that he was riding In one of the old-fashioned tricycles. The driver, however, steered clear of all other vehicles by a quick turn of a lever in the middle of the seat.

This answered to his  every touch and the horseless carriage, running along without any apparent means of locomotion, gave one an uncanny notion something akin to that when, in childhood, with covered head, one listened to the tales of the witches wild who ride on a broom stick.

"What does it cost to run the Auto vehicle?" was asked.

"From five cents to $1.00 per day," replied the motorneer who was manipulating this wonderful carriage, "and it will go at speed of 12 miles an hour. The battery must be renewed every 30 miles, but that is done in a moment's time."

The battery is located on the back axle of the vehicle, but this is all covered over by the highly polished carriage box.

It is neat and not at all clumsy, and runs with little noise.

The springs are easy and it is cushioned luxuriously, so that with a perfect understanding of the mechanism, which is extremely simple, one can have all of the comforts of a drive without the feeling that a poor animal is working to provide one with pleasure.

Want to read more from our archives? Check them out here.