CUSTER, South Dakota - The health of Senator Thomas F. Eagleton emerged today as a possible major issue in this year's presidential campaign with his disclosure that he had received psychiatric help, including electric shock treatments, for exhaustion resulting from overwork.

The vice-presidential nominee startled reporters at a press conference here by announcing that on three occasions between 1960 and 1966, he had voluntarily hospitalized himself for physical and nervous exhaustion. He made the disclosure with Sen. George McGovern of South Dakota, the presidential nominee, at his side. The two men had met earlier today to map plans for their campaign.

McGovern said he has not known about Eagleton's medical history, but expressed the fullest confidence in his running mate and said he would have picked him for that position even if he had known all of the facts that Eagleton disclosed today.

McGovern called the St. Louisan "fully qualified in mind, body and spirit" to be Vice President and, it necessary, to take over the office of President. Eagleton said his decision to disclose his medical history had been triggered by the "rapidity with which rumors about my health were developing in Missouri." He said he felt it was legitimate for the press to make inquiries about his health.

A number of such inquiries have been made to his staff since his selection as the vice-presidential nominee in Miami Beach 12 days ago. The first of the three occasions on which Eagleton said he had voluntarily hospitalized himself for what he termed nervous exhaustion and fatigue occurred between Dec. 1, 1960, and Jan. 1, 1961, or a few days later.

He entered Barnes Hospital in St. Louis, where he said he was under the care of his family internist, Dr. William D. Perry. The second occurred between Christmas of 1964 and New Year's Day 1965, when he spent four days at the Mayo Clinic in Rochester, Minn., for a physical examination. The third occurred in mid-1966 when he returned to the Mayo Clinic for about three weeks.

Under questioning, Eagleton acknowledged that he had received psychiatric help when hospitalized in I960 and again during his stay at the Mayo Clinic in 1966. He said there had been no psychiatric care involved in the brief visit to the clinic in 1964. In speaking of the 1960 and 1966 hospitalizations, he said, "I received counseling from a psychiatrist, including electric shock treatment."

Eagleton said his symptoms during the periods that led to his hospitalization had included a feeling of exhaustion, accompanied by some depression, and a stomach problem, which he described as "a nervous stomach" caused by fatigue. With a grin he remarked, "It's not too different from that fellow in the Alka Seltzer ad who says, 'I can't believe I ate the whole thing.' "

Eagleton attributed his problems to his "hard-driving, intense" nature. "As a younger man, I drove myself too far," he said. He attributed his problem in 1960 to his intensive campaign that year for Missouri Attorney General and to his efforts on behalf of John F. Kennedy's presidential campaign. He said he had stumped Missouri almost without rest and had "pushed myself terribly, terribly hard."

He did not explain the circumstances that led to his reported exhaustion in 1964 when he was elected lieutenant governor and in 1966. In reply to a question Eagleton replied that his physical problems had not been related to drinking. "Alcohol was not involved in any iota, way, shape or form."

He said rumors concerning drinking had "plagued me through the years." Rumors about his health also have followed his political career in Missouri, especially in his successful campaign for the Seante in 1968.

But these rumors "never surfaced publicly," he said.

Eagleton said he had not informed McGovern of his medical background before his selection for the vice-presidential nomination. He said he had decided that it should be brought out publicly and that he had come to South Dakota with the intention of disclosing it after discussing it with McGovern.

"In seeking the second-highest office in the land," Eagleton observed, "one's life becomes more and more an open book." When he was asked why he had never disclosed his medical background previously, he replied that doing so was not an experience that one enjoyed.

Eagleton said that he has enjoyed "good solid health" since his hospitalization. He said he had learned to pace himself.

He expressed confidence that he could devote his full energies to the forthcoming campaign, but "on a measured basis." He said he had learned to take a day off and would follow this practice in the campaign. He noted that he received physical examination last Friday in the Senate Clinic and was found to be in good health.

Additional tests were performed yesterday at the Bethesda, Md., Naval Hospital and Eagleton predicted that the results would be favorable.  "So far," he remarked, "doctors have told me that I'm two pounds overweight and have half a hemorhoid." The remark brought laughter from the reporters.

Eagleton said he first informed McGovern of his illnesses in a conversation the weekend after the Missourian was selected for the vice-presidency. McGovern said when he had asked Eagleton whether there were any significant problems in his past that might interfere with his serving as the vice- presidential choice, the St Louisan had said there were none. "I agree with that decision and am fully satisfied," McGovern said.

McGovern noted that in considering running mates, he had requested suggestions from about 20 members of Congress, among others. With one or two exceptions, he went on, Eagleton was on all the congressional lists, often as the first choice and more frequently as second to Sen. Edward M.  Kennedy of Massachusetts.

"I have not the slightest doubt about the wisdom of se lecting him or entrusting the American government to him," McGovern said. "I would not have hesitated one minute to select him if I had known all the facis he has disclosed today."

McGovern emphasized that "many men who have served in the presidency suffered from far more serious illnesses than Senator Eagleton has had." He praised Eagleton for what he called his "candor and openness" in making today's disclosure. He said he had been unaware of the rumors that Eagleton referred to concerning his health.

When asked whether he thought the Republicans would seek to exploit the disclosures for political advantage, Eagleton said, "I can't speculate" on that. Eagleton flew here from Washington last night for conferences with McGovern. From here, Eagleton is to go to California and Hawaii on his first campaign swing. The Missourian is known to feel that the most urgent task facing the Democratic ticket is the need for an immediate start in winning back the support of regular party leaders in a number of key states. Eagleton believes that he and McGovern should wait before approaching the leaders of organized labor. Also on the agenda for discussion today was the nature of Eagleton's campaign.

Particularly at issue is how he is to carry out his assignment of replying to the strong attacks expected from Vice President Spiro T. Agnew. Eagleton is known to feel strongly that he should not try to match rhetoric with Agnew who has won a reputation for harsh, partisan and personal attacks. Not only does such an approach "not suit Eagleton's style, but he fears that its similarity to Agnew's technique would make it ineffective. 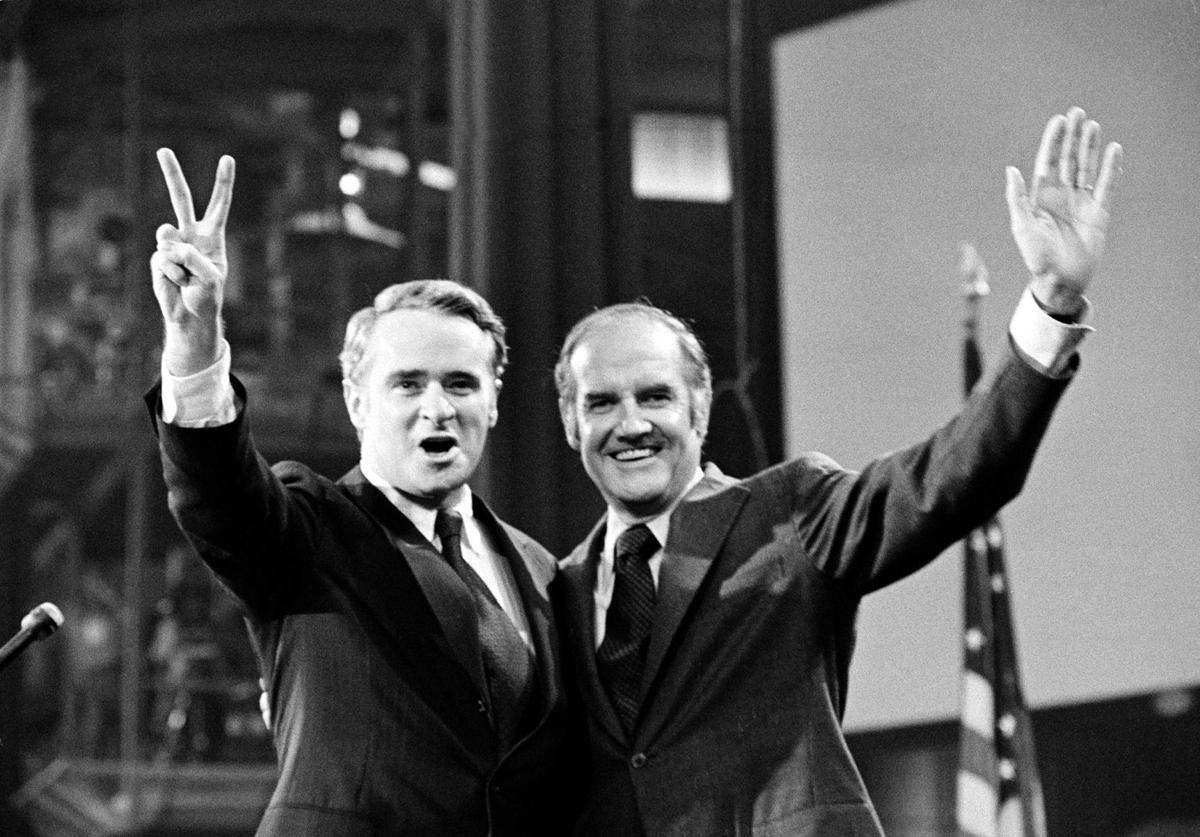 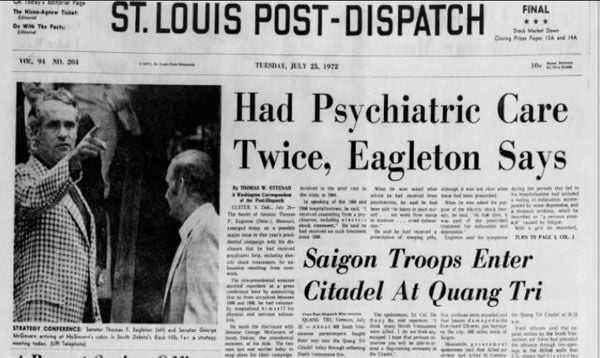 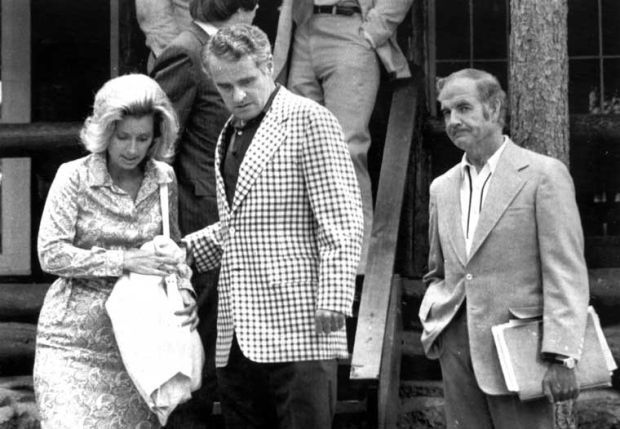 Sen. Thomas F. Eagleton helps his wife down steps on July 25, 1972, as  Sen. George McGovern watches glumly. McGovern, the 1972 Democratic presidential nominee, had just decided to drop Eagleton as his running-mate after reports about his hospitalizations and shock treatments.  UPI photo 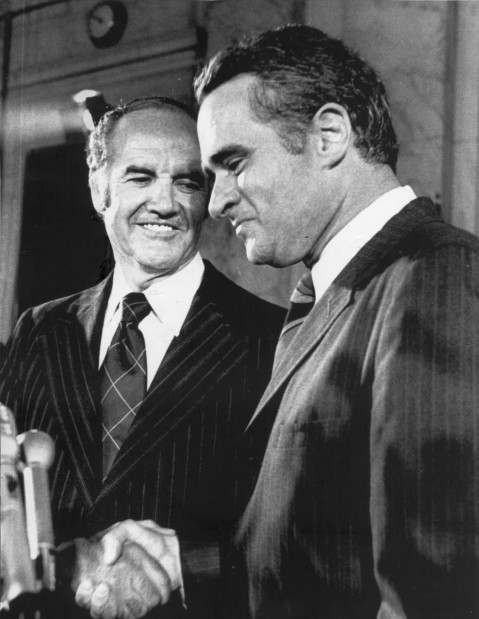