On  May, 1, 1982, the long-awaited "Twain" sculpture by artist Richard Serra was dedicated at the Gateway Mall. The panels of rusted steel soon became much ridiculed. Our art critic didn't see it that way. Here is her original review, posted shortly before the dedication.

Through ups downs of fortune in three city administrations, and a final run of problems (bad weather, warped and stained metal) that slowed its installation, the St. Louis public sculpture that Richard Serra conceived nine years ago is near completion.

It is being dressed with grass, trees and lights, and the finished product will be dedicated May 1.

It fills roost of the downtown block just east of the Civil Courts building, bounded by Tenth, Eleventh, Market and Chestnut streets. Its total cost is about $250,000, of which Serra's fee is $20,000.

In drawings and descriptions the piece has had a rather truculent, forbidding air. After all it is an enclosure of steel plates, two inches thick and ten feet high.

Last week, at any rate, bulldozers had established the basic earth grade and it was possible to walk freely in and out of the work, experiencing it in a next-to-final form.

It is more benign than it had seemed on paper, and much more interesting. It has a powerful, bracing presence, with no sensation of confinement or threat. Within, the space feels protected but open. One is not cut off; indeed, the surrounding cityscape is somehow magnified and enhanced.

In plan the walls define a four-sided figure, actually looking more like a jaunty triangle with one side slightly hipped. The sharp end of the triangle points toward the south leg of the Gateway Arch. (It was supposed to aim a little more directly east but had to be shifted to avoid some buried pipes.)

The shape refers both to the four-sided city block on which the sculpture sits, and in its approximate triangularity to the soaring Arch that anchors the mall at its eastern end. There is a marked overall effect of horizontality.

The plates are set into the ground on their long edges, separated by door-like gaps about two and a half feet wide. Seven of the plates are 40 feet long. The eighth, 50 feet long, forms the short southeast side of the quad.

The steel is the Cor-Ten kind that oxidizes just so far and no farther. Presently a rusty orange, the color will deepen over a couple of years to dark brown and stay that way.

Sixty-six lights, about five feet apart, two and a half feet out from the plates and flush with the ground, will give the exterior an even illumination.

Inside, the eight openings between plates will be flanked by pairs of the same up-lights. They will go on and off with the street lights.

Last Monday workers began to plant 36 shade trees. Sod will give an instant lawn inside the work and on a 20-foot strip around it. The rest of the block will be seeded. The landscaping is essentially Serra's plan, drawn up by George Dickie of Hellmuth, Obata and Kassabaum in consultation with Serra. The two men staked out tree locations Monday, leaving free the sight-lines made by lining up openings between plates. Pin oaks, scarlet oaks, red maples and sycamore or, plane trees were selected for their tolerance of city conditions and high-branching growth habit. The trees are good-sized ones, four to six inches in trunk diameter and over 15 feet tall. After they leaf out and it is seen where the best shade falls, benches will be installed.

There will be no paths except those worn by foot traffic. If paths are eventually formed that way, Serra has no objection to their being paved, but he does not want to direct from the start how people will walk into and around his sculpture. In effect, the city is not only getting one of the most important works so far by one of the most important living sculptors it is also view to east. Trench and holes were acquiring a lovely urban park designed by the artist.

The plates are mounted in a horizontal plane. Since there is a distinct downward ground slope toward the southeast, the steel is only about five and a half feet out of the high ground at the northwest end of the sculpture, and about nine feet at the prow-like east end, the open "point" of the piece. Thus the work again, and intentionally, makes us aware of its site. It is a slope of which we had before only a subliminal awareness; now it is emphatically defined.

A viewer close to one of the gaps will see bracketed vignettes of the city dug for lighting installation. between the steel plates, most dramatically at the east end where the walls are higher. From any other point inside, one is more aware of all the surrounding city buildings and the sky. It's a commodious space to move around in about 5,865 square feet, enough for a small residential lot and the walls are low in relation to it.

The steel fence does invite you to walk around it, and in and out of it. That's the only way to grasp the Serra work in its entirety. The visitor is moved to find spots for sighting down the lines of plates, making planes become lines. One plays with what the openings reveal: whether looking at. Friends into, out of, or through the piece, different shapes, relationships And slivers of data are perceived. I was drawn to find the high ground en he west from which the tops of all the plates fall into one level plane. A little further upgrade, toward the Civil Courts Building, you can look down into the enclosure.

The extraordinary inside-outside quality of this "container" brings it very close to architecture. The work can even be seen as a sculpture in a room the room being the city block, walled by buildings. Both enclosures have walls with narrow openings. The interior, both open and closed, becomes a metaphor for art as a selector and emphasizer of experience. Serra's work manages to be public sculpture without being a monument it wasn't meant by him or the people who commissioned it to represent or commemorate anything, in the way the Arch symbolizes the passage pf westward emigrants through St. Louis.

Serra greatly admires Eero Saarinen's Arch – "one of the best structures in the country, with its weightless grace and elegance" – but he thinks of his own earthbound St. Louis work as related more to Eads Bridge. In its heavy stock material and its industrial mode of fabrication, the mall piece associates itself with a 20th-century urban site. The use of industrial components and assembly suggests, to Serra, another relation with bridges like ours spanning the Mississippi. (Serra likes bridges in general; in 1976 he made a movie called "Railroad Turnbridge.") The work's horizontality also evokes, for Serra, the relatively flat Midwestern landscape, and the great river that moves by, largely unnoticed, at the city's eastern curb.

Another thing the mall sculpture isn't, Serra said, is an embellishment: "It's purpose is not to garnish the space like a pin on a dress, but to provide an experience of that space which redefines it in sculptural terms." To a remarkable extent the artist has brought to realization the subtle idea that he's been talking about. My guess is that St. Louisans and visitors, by wearing paths in the grass as they explore Richard Serra's curiously stirring creation, will soon register quiet approval of what the city has acquired. 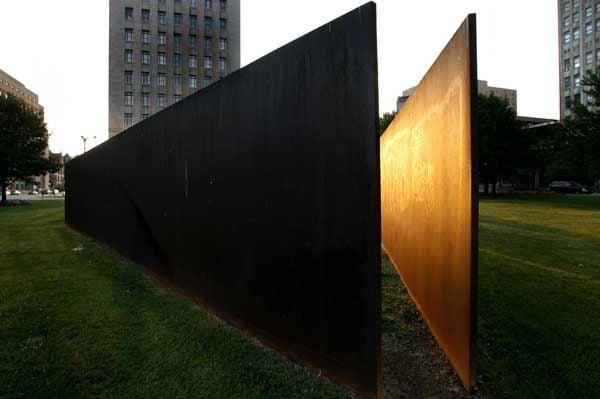 Twain, the controversial Serra sculpture downtown, is shown in a June 2007 file photo. It was supposed to put St. Louis on the cultural map and be the mall's showpiece. Instead, it's mostly ignored, except by the homeless who often sleep inside it. Photo by Laurie Skrivan, lskrivan@post-dispatch.com 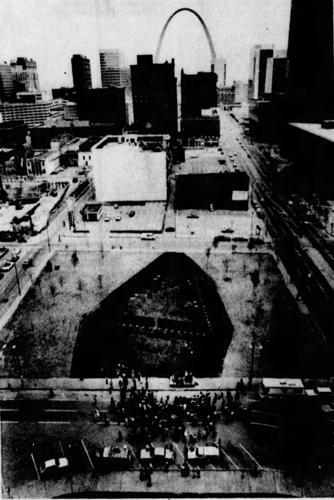 On overview of the Serra sculpture on its dedication day, May 1, 1982. J.B. Forbes photo. 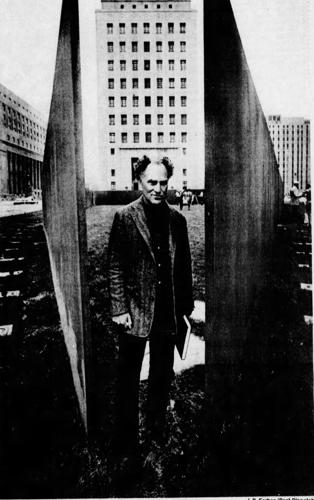 Richard Serra with his sculpture "Twain" on its dedication day, May 1, 1982. J.B. Forbes photo. 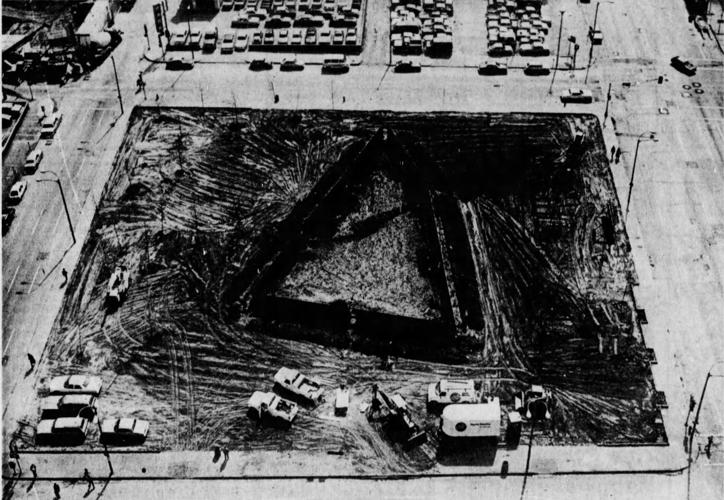 A look at the Serra sculpture during its last stages of completion in 1982. Post-Dispatch photo. 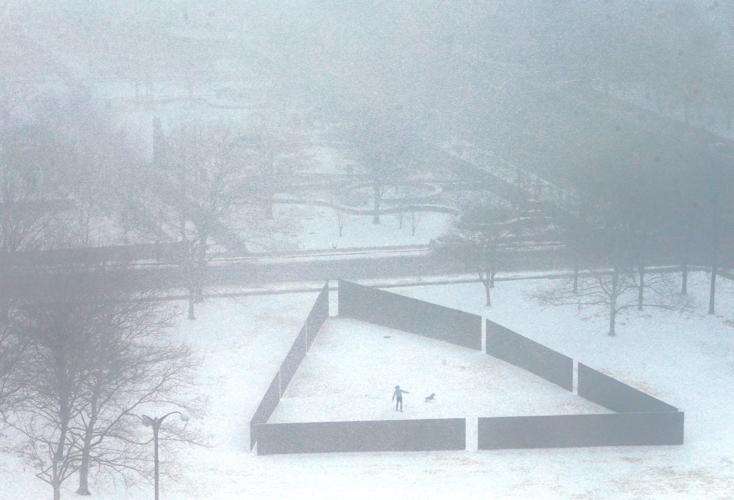 A dog owner plays a game of fetch with his pet inside the "Twain" sculpture on Monday, Feb. 16, 2016, at Serra Sculpture Park. Heavy fog hung over the metropolitan St. Louis area. Photo by Laurie Skrivan, lskrivan@post-dispatch.com