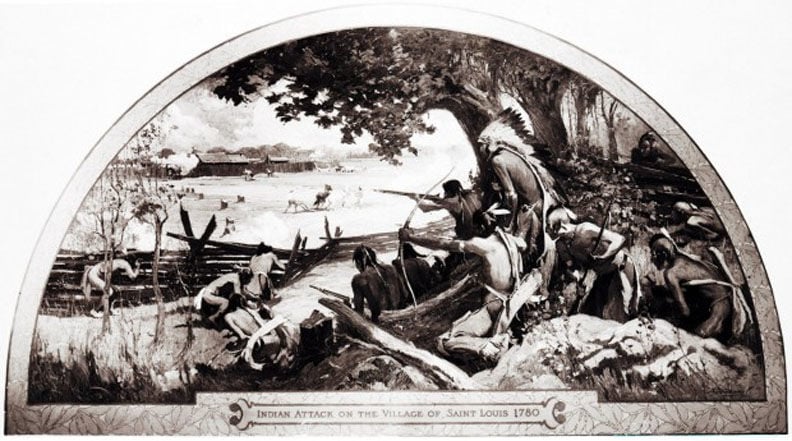 An artist's depiction of the British-led attack upon the village of St. Louis on May 26, 1780. The painting, by Oscar Berninghaus of St. Louis, is one of the scenes from Missouri's early history that are on the walls of the mezzanine level of the Missouri Capitol in Jefferson City. They were painted during the 1920s, shortly after the building was opened. (Missouri History Museum) 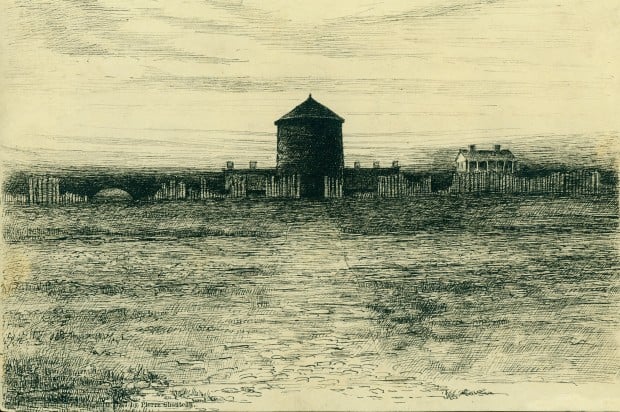 An ink drawing of the stone defensive tower that St. Louis residents built in 1780 near present-day Fourth and Walnut streets downtown. Don Fernando de Leyba, ordered its construction after hearing of British plans to attack the village. He named it Fort San Carlos in honor of Spanish King Charles III. Five cannon mounted in the tower fired upon the British-led force of Native American warriors who attacked on May 26, 1780. The drawing was made more than a century later. The tower was 30 feet in diameter and 30 to 40 feet tall. (Missouri History Museum) 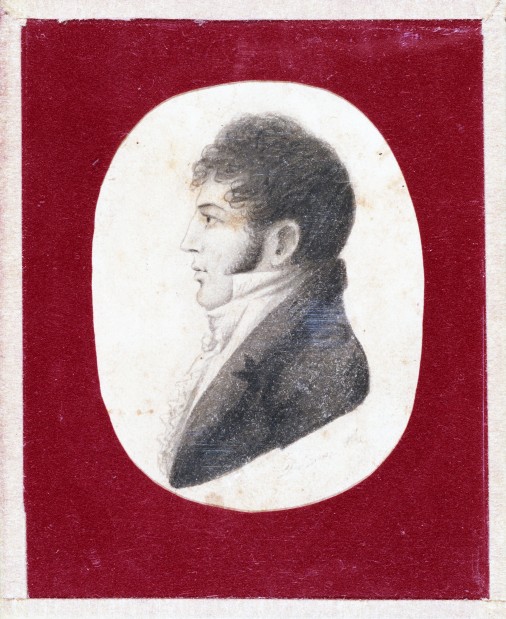 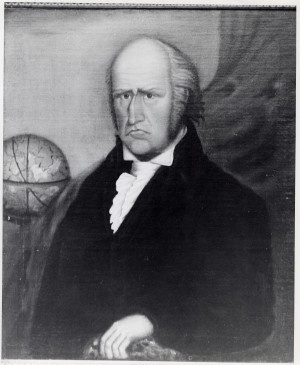 George Rogers Clark, an American Revolutionary frontier officer whose troops seized and held Kaskaskia and Cahokia from the British in 1778. He is more famous for capturing the British fort at present-day Vincennes, Ind., the next year. On May 26, 1780, warriors led by British officers attacked St. Louis and Cahokia. Both attacks were repulsed. On that day, Clark was near present-day Cairo, Ill., supervising construction of a fort. He was 27 at the time. (Missouri History Museum)

ST. LOUIS • The American Revolution was far away from the 700 people of this wilderness trading village. Mostly of French origin, they were little disposed to care about Bunker Hill or Valley Forge.

American commander George Rogers Clark and a small band of frontiersmen had managed to run the lonely British sentries from Cahokia and Kaskaskia in 1778 with little effort or gunfire. Local merchants such as Charles Gratiot rewrote their customer lists, betting on the Americans.

But the war would find St. Louis, at least for a day, because of imperial scheming in Europe. Great Britain wanted to flank the rebellious American colonies and snatch vast Louisiana from Spain, which ruled the former French colony with a soft touch and few troops. Spain saw a chance to grab some of the land east of the Mississippi River from the English, who were distracted by the pesky insurrection on the Seaboard.

In two palaces far away, maps pointed to St. Louis as a place of value.

By March 1780, the trader grapevine brought word that the British were recruiting Native American warriors from around the Great Lakes to attack St. Louis. Don Fernando de Leyba, the Spanish lieutenant governor here, ordered construction of a stone tower near present-day Fourth and Walnut streets on the ridge overlooking the river-hugging village. Local residents, slave and free, dug trenches vaguely around what would become the Gateway Arch grounds. Just to the west were the common planting fields.

More rumors floated down the Mississippi River. Leyba expanded the local militia and ordered up the small garrison from Ste. Genevieve.

On May 25, 1780, St. Louisans celebrated the Catholic feast of Corpus Christi by relaxing in the common fields, picnicking on wild strawberries. British officers and their warrior allies watched the frolic from nearby woods and figured their stealth had held.

Shortly after noon the next day, the British force of perhaps 600 caught a few farmers outside the line before its screaming charge from the north was stopped cold by heavy musket fire from the trenches and steady blasts from five cannon in the tower. Stunned by the defenders’ readiness, the warriors never reached the trenches and, after a few more half-hearted feints, retreated. The Americans in Cahokia brushed off a smaller attack.

Prudently, Leyba kept his force of 300 from charging after the warriors, who returned upriver in a hurry.

Accounts of casualties vary wildly. The British claimed to have killed 68 in and near St. Louis. Leyba reported 21 killed and 25 taken away as prisoners. Later research suggests only six were buried in the St. Louis churchyard, although others were buried in the outlying countryside.

The British never tried again for St. Louis, where relief gave way to anger that the episode had spoiled the trading business. Leyba was upset with his ungrateful charges when he died a month later of a sudden illness.

St. Louis remained a colonial outpost until 1804, when the United States took over through the Louisiana Purchase.

From Auguste Chouteau to Jon Hamm: A whirlwind tour of St. Louis history in photos

Damage from the Great Fire of 1849

Civil War fundraiser for troops, their families and freed slaves

Construction of the Eads Bridge

Roadway work begins as Eads Bridge is under construction

Construction work on renovation of Eads Bridge in 2000

Re-enacting battles at the World's Fair

Prohibition in the 1920s

Prohibition in the 1920s

Hoping for the end of Prohibition 1932

Riverfront before the Arch, 1939

Busch Stadium under construction in 1965

Peering down from the Arch