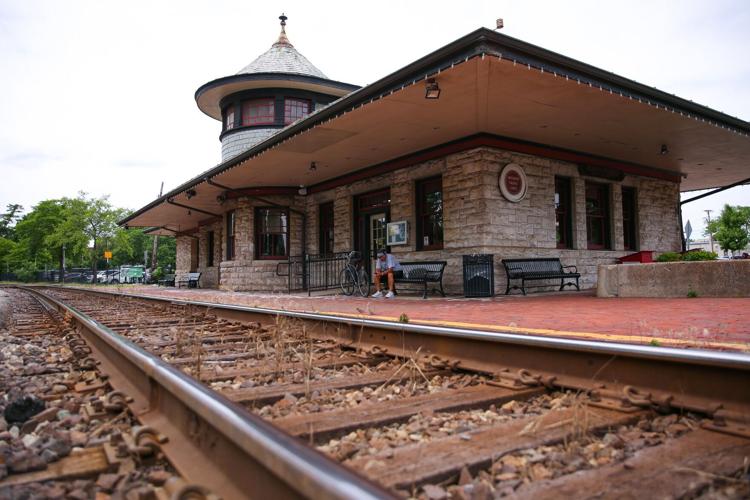 The historic Kirkwood Amtrak Station on Thursday June 2, 2022. After two years of fundraising, plans to renovate the station are moving forward. Photo by Jack Myer, jmyer@post-dispatch.com 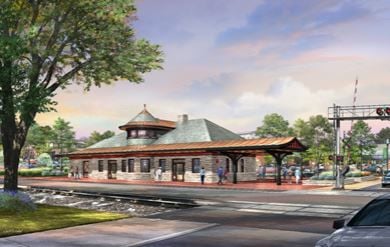 KIRKWOOD — A yearslong effort to give the historic Kirkwood Train Station its first full renovation since 1941 is gaining momentum this month as the city moves forward with design plans and $2.5 million in federal funding awaits state approval.

The Kirkwood City Council voted unanimously Thursday to approve a contract with Mackey Mitchell Architects for up to $451,500 to complete design work on the multimillion-dollar project. The firm has done work at the Missouri Botanical Garden and St. Louis Zoo, among other local institutions, and led the 2018 renovation of the Soldiers Memorial Military Museum in downtown St. Louis.

An icon of downtown Kirkwood that’s featured in the city logo, the distinctive train depot built in 1893 is listed on the National Register of Historic Places.

But the historic building has long been on the verge of disrepair. Its needs include a new roof and HVAC system along with new restrooms, doors, floors, windows and lighting. Plans for the renovation also include better accessibility for people with disabilities, a new storage building, redesigned parking and a new platform canopy that’s similar to the original one.

“We feel like we’re gaining ground,” said Art McDonnell, president of the Kirkwood Train Station Foundation, a nonprofit that’s fundraising for the project, and the mayor of Kirkwood from 2008 through 2016. “We’re confident that we’re going to make it and that this wonderful building will be preserved for many generations to come.”

The city purchased the station from Union Pacific Railroad for nearly $1 million in 2003 with hopes of keeping it preserved and operating. Today, it remains an active station serving Amtrak’s Missouri River Runner route that travels once daily each way between St. Louis and Kansas City. The city also rents out the wood-paneled depot for small events.

Under plans for the design, construction on the project is set to begin in late 2024 and could be complete as soon as 2025, Kirkwood City Engineer Chris Krueger said this week.

In a 2020 grant application, the city estimated the project would cost $4.6 million, though that may change by the time construction begins due to rising costs, Krueger said.

The plan has been in the works for more than eight years, led by the city with help from the Kirkwood Train Station Foundation.

So far, the city and foundation have raised nearly $2.5 million, with the majority coming from a $1.5 million grant from the East-West Gateway Council of Governments awarded in 2021.

And more federal money may soon be on its way: $2.5 million in federal funds are set aside for the project in Missouri’s $49 billion spending plan approved earlier this month by the Legislature. The funds would require a 50-50 match in local spending. The proposal is awaiting a signature from Gov. Mike Parson.

In order to get the matching funds, if passed, the foundation is continuing to fundraise, McDonnell said

“The largest private donation we’ve gotten so far is $100,000,” he said, though he did not specify the donor. “And then it goes all the way down to a 3-year-old who loves trains putting $2 in the collection box.”

McDonnell, sitting at a chess table in the station on a recent afternoon, pointed to a grandfather, Tom Staeley, who was showing train models there to his 3-year-old grandson Gus.

“That’s what this is all about,” McDonnell said.

Staeley, who lives in south St. Louis County, said he got his lifelong love of trains from his father and brought his own three sons to the station to watch trains nearly once a week through their childhood. On that day, his grandson excitedly waited for the Amtrak to arrive, asking his grandpa questions about types of trains.

“Hopefully they can keep the Amtrak coming,” Staeley said. “And I would love to see this place restored.”

“Kirkwood was founded because of the railroad,” said McDonnell. “And so there always has been a Kirkwood Train Station.”

The city, which now numbers about 28,000 residents, was one of the first planned suburbs in St. Louis County because of its location along the railroad tracks.

Even the city’s name has a train connection: James Pugh Kirkwood was an engineer and surveyor for the Pacific Railroad.

An original depot was built on the site of the current station in 1853 during the early years of Missouri train travel. The building that stands today was completed in 1893 and originally had an entry made to accommodate stagecoaches along with separate waiting rooms designated for gentlemen and ladies.

The station was used for years for commuter routes with, by 1900, 14 trains a day running each way between Kirkwood and downtown St. Louis, according to the foundation’s historic account of the station.

The station underwent a major renovation in 1941, leading to its current layout, making the entryway easy for cars rather than horses among other improvements.

Pacific Railroad owned the land for more than 150 years and sold it to Kirkwood for about $1 million in 2003.

“We don’t want the station in the hands of a private individual who might use the site for other purposes,” City Administrator Mike Brown told the Post-Dispatch in 2003. “It’s the centerpiece of Kirkwood.”

That same year, Amtrak in the face of budget cuts opted to remove staff members from the station’s ticket booth. Brown and other city officials in response put out a call for volunteers and 199 people showed up to a first meeting about donating their time, according to a 2013 story in the Post-Dispatch.

Today the station is fully run by about 60 volunteers along with a paid station manager, according to city staff.

In 2019, the station served about 50,000 riders, but that was significantly reduced near the beginning of the COVID-19 pandemic and also when Amtrak opted early this year to go down from two to one daily trip of the Missouri River Runner route.

“I hope that will change, that we get two trains back,” said Bud Moss, a train enthusiast and retired electrical engineer who has been volunteering at the Kirkwood Train Station most Wednesdays for the past 20 years. “It’s a great old station and, you know, there’s nothing really like travel by train.”

The Kirkwood Train Foundation is hosting a fundraiser 6:30 p.m. June 9 in Kirkwood’s Station Plaza. The event will feature a concert by Matt Jordan. There is no cost for entry, but the foundation will take donations.

The historic Kirkwood Amtrak Station on Thursday June 2, 2022. After two years of fundraising, plans to renovate the station are moving forward. Photo by Jack Myer, jmyer@post-dispatch.com 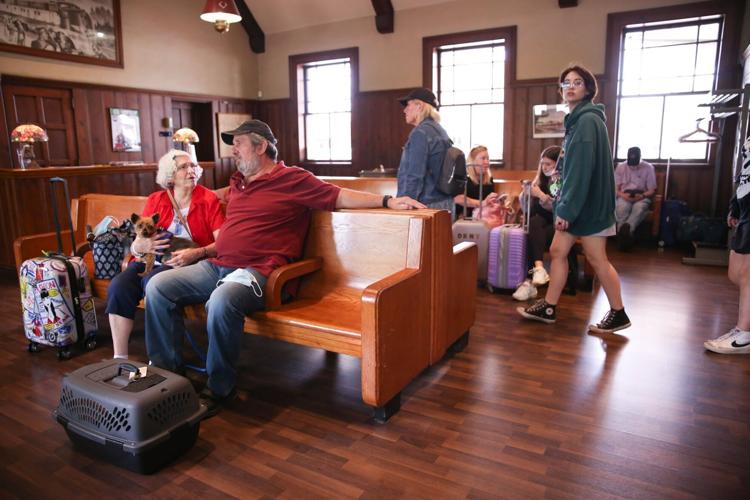 Dottye and Jerry Erbs, left, wait for the Amtrak train to Kansas City at the historic Kirkwood Amtrak Station on Thursday June 2, 2022. Dottye Erbs plans to take the train to Lee's Summit, a suburb of Kansas City, to visit her daughter. Photo by Jack Myer, jmyer@post-dispatch.com 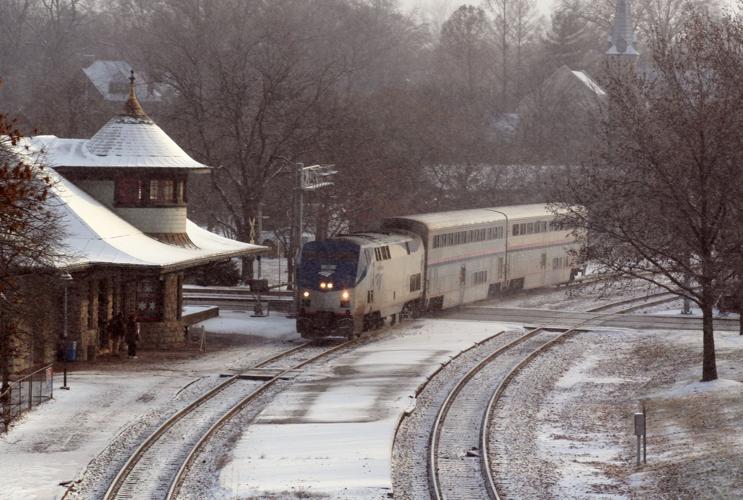 A light snow falls as an eastbound Amtrak passenger train pulls into the Kirkwood station just before 9 a.m. Wednesday, Dec. 17, 2008. 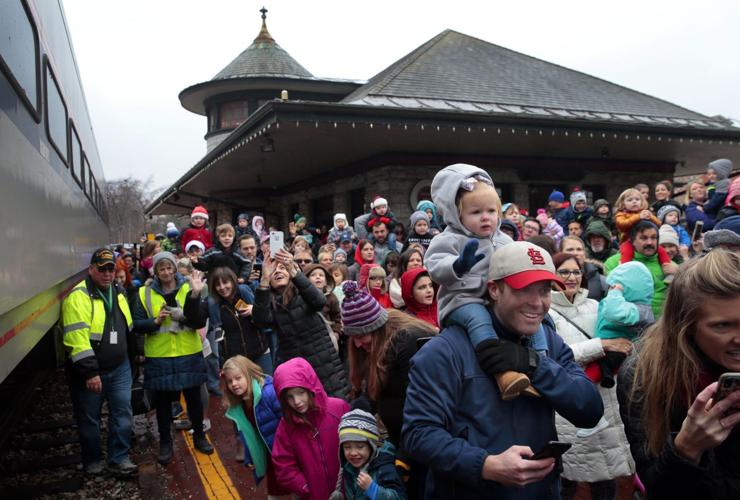 Anticipating the arrival of Santa and Mrs. Claus, visitors block Kirkwood Road as an Amtrak train carrying the couple arrives at Kirkwood Station from the east on Saturday, Nov. 23, 2019. Photo by Robert Cohen, rcohen@post-dispatch.com.