The day a huge 'peace with honor' march in St. Louis turned violent
0 comments
Share this
{{featured_button_text}}
From the Post-Dispatch archives

It was supposed to be a pro-USA show of patriotism reflecting the "silent majority" support for the war in Vietnam. But things turned violent along the parade route on Lindell Boulevard. Here is the original report from the June, 8, 1970, St. Louis Post-Dispatch.

Sporadic outbreaks of violence marred an otherwise peaceful march by thousands of St. Louis area labor union members and other citizens yesterday in a demonstration of support for the United States and a policy of "peace with honor" in foreign affairs.

The nearly four-mile route of march along Lindell Boulevard, from Des Peres Avenue to Spring Avenue, was one of the longest in the city's history. Police estimated that 40.000 to 45,000 persons took part. More than 100 groups, most of them labor unions, participated.

Hundreds of persons lined the route and cheered the marchers. Participants and spectators alike gaily waved small American flags. Most of the union members wore hard hats decorated with flag decals. Many carried signs of support for the government. Others held aloft handmade signs critical of college students and recent violent demonstrations on American college campuses.

About a dozen persons were injured in fights that broke out between marchers and spectators. Most were in their early twenties. Most suffered bloodied noses, lacerations and abrasions. Police said that several summonses were issued, most for peace disturbance.

One policeman was reported injured. The most serious confrontation took place at 5215 Lindell when about 50 marchers waded into a group of seven young persons. The melee started when a marcher tore up a sign held by Timothy M. Kirby. 22 years old, who said he was discharged from the Army last week. Kirby's sign read, "Veteran against the war."

He and six members of the William G.Hodel family were sitting on the property when the marchers charged into them. Mrs. Hodel, who was knocked down and kicked, sprayed water from a garden hose on the marchers as they charged onto the lawn. Kirby; William G. Hodel II, 22; Miss Mary Anne Hodel, 23, and Paul Denouden, Chicago, Mrs. Hodel's son-in-law, suffered cuts and bruises. They said they were beaten and kicked by the marchers.

"You got just what was coming to you, fella, you asked for it," taunted one bystander as police talked to the Hodels and Kirby. "These people are worse than John Birchers," another bystander said of the marchers.

The group that attacked the Hodels and Kirby was marching in the first unit in the parade, Local 27 of the Boilermakers Union.

Lynn T. Spence, a Post-Dispatch photographer, was admitted to Bethesda Hospital with a head injury suffered when attempting to photograph the fight.

Other groups in the march cheered and jeered as they passed the Hodel residence after the scuffle. Word of the violence quickly spread down the line of march.

Dan Desmond, 4924 Buckingham Place, suffered a bloodied nose and lacerations when he was hit by several marchers. Desmond and two companions were sitting in a convertible in the 42O0 block of Lindell when Desmond shouted, "Where are the black men?" There were fewer than 50 Negroes in the parade.

About seven men marching with Local 788 of the Amalgamated Transit Union approached the automobile and, after a brief dispute, one man slapped Desmond. As the marchers started to depart, one man turned to Desmond and said, "You punk, you." Desmond responded with a curse and the man leaped into the car. The two men fell to the ground on the other side of the auto and Desmond was pummeled by three men. The fight was quickly broken up by other marchers.

Shortly after, about 40 young persons joined the march behind a young man wearing a hard hat and carrying a sign reading, "One patriotic hard hat for peace now." Their presence led to a pushing and shoving match in the 3700 block of Lindell. It began when several of the "hard hats" demanded that the youths, many of them dressed In bell-bottom trousers and colorful shirts and blouses, leave the parade.

"Do your thing someplace else," one man yelled. "Move, get out," another screamed. Several persons were knocked to the pavement by the marchers. The glasses of Miss Sema Moss, 23, a teacher of remedial reading in an East Side government program, were broken.

Lucian A. Nerwinski, 23, of 5142 Waterman Boulevard, was struck in the face. "We started talking to them and told them we had a right to express our opinion, too," Nerwinski said. A motorcyclist riding escort with the group, Don Flynn, 38, was knocked from his vehicle and wrestled to the ground by several paraders. One man struck Flynn with a board but then was restrained by other marchers.

A detective, John Simeone, was struck in the face when he attempted to break up a dispute at York Avenue and Lindell. That scuffle was touched off when the marchers tore away from a woman bystander a sign reading, "Killing living things is not honorable." The spectator, Mrs. Honora H. Eppert, 4914 Argyle Place, was arrested along with a marcher, Robert G. Marshall, 10510 Roscommon Drive, Concord Village. Both were charged with peace disturbance. Simeone was treated at City Hospital for a bloodied nose.

Kenneth Sander, who said he was a teacher at Northwest High School, was beaten by a band of stick-wielding men who broke the march in front of the Knights of Columbus building, 4331 Lindell Boulevard, and streamed up a small incline. Sander, who has a beard and long hair, said that when the first of the group approached him, a man shouted, "You a Communist?" The men chased Sander into Lindell, knocking him down and kicking him repeatedly. One of the marchers pulled some of the men off Sander and escorted him to the side of the street.

Police interrupted a fight between a marcher and bystander and arrested both men on charges of peace disturbance. The bystander, James McCarthy, 2122 Wismer Road, Overland, suffered a cut lip. Police quoted the marcher, Andrew Hotchkiss, 415 Wilmington Avenue, as saying that he acted in self-defense.

Robert Holtz, 2142 Bellevue Avenue, Maplewood, was taking photographs of the march when one of the paraders left the ranks and struck him in the face. Holtz suffered facial cuts. Another bystander, identified as John Hunziker, a postal worker, was knocked down, kicked and beaten by a small group of men who left the parade in the 5700 block of Lindell. Hunziker was wearing bell-bottom trousers and had a goatee and long hair. He carried a sign, "Save lives, not war." It was torn up.

A television crew from the Columbia Broadcasting System's Chicago bureau was harassed and one cameraman was chased by men yelling, "You're a Communist, you're a Communist."

The intersection of Spring Avenue and West Pine Boulevard, where the parade broke up, became the scene of a shouting and shoving match between marchers and some hippie-type onlookers. Several observers, most of college age, were struck as they watched the parade on a raised, grassy area at the northeast, corner of the intersection. One youth was dragged to the pavement and hit in the face. A long-haired bicyclist was pulled from his vehicle and slapped several times by the marchers. His bicycle was kicked and damaged.

Police later separated a young man from several marchers when they became engaged in a heated dispute. One marcher repeatedly shouted "Jew" at the youth. Three youths, including a girl, also were set upon by several marchers but were aided by plainclothes police. One policeman was overheard telling the marchers, "Don't worry, that's what we're here for: to protect you from these agitators."

A union representative expressed regret at some of the marchers' actions. "What some of these guys are doing is no better than the kids who burn the flag and support the Viet Cong do . . . it's too bad."

A look back • Thousands gather after Charles Lindbergh flies back in his Spirit of St. Louis

Lindbergh, then 25, returned in his Spirit of St. Louis on June 17, 1927, almost a month after his nonstop flight from New York to Paris. 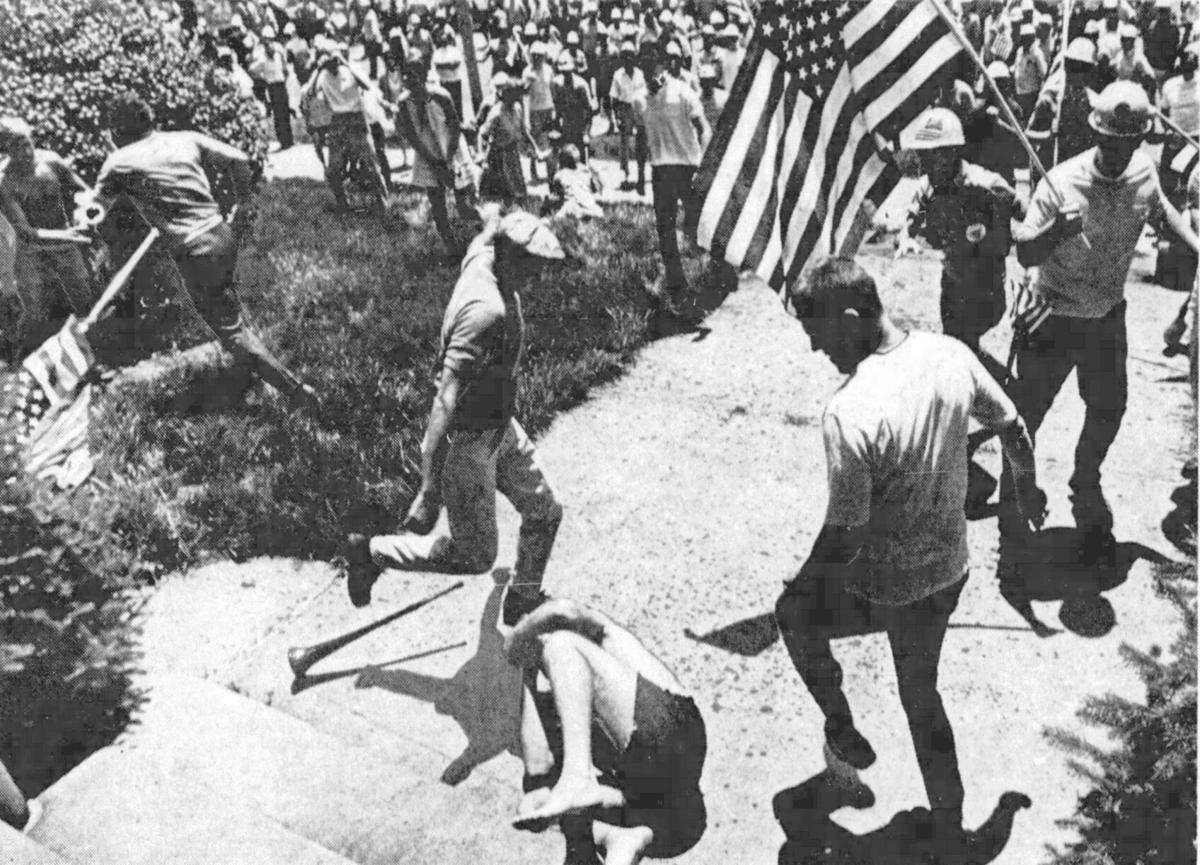 Tim Kirby attempts to block his face from kicks by two marchers in a parade in St. Louis on June 7, 1970 supporting U.S. policy in Vietnam.  Photographer Lynn T. Spence was struck in the head with a bottle immediately after taking this photo. Lynn T. Spence/St. Louis Post-Dispatch 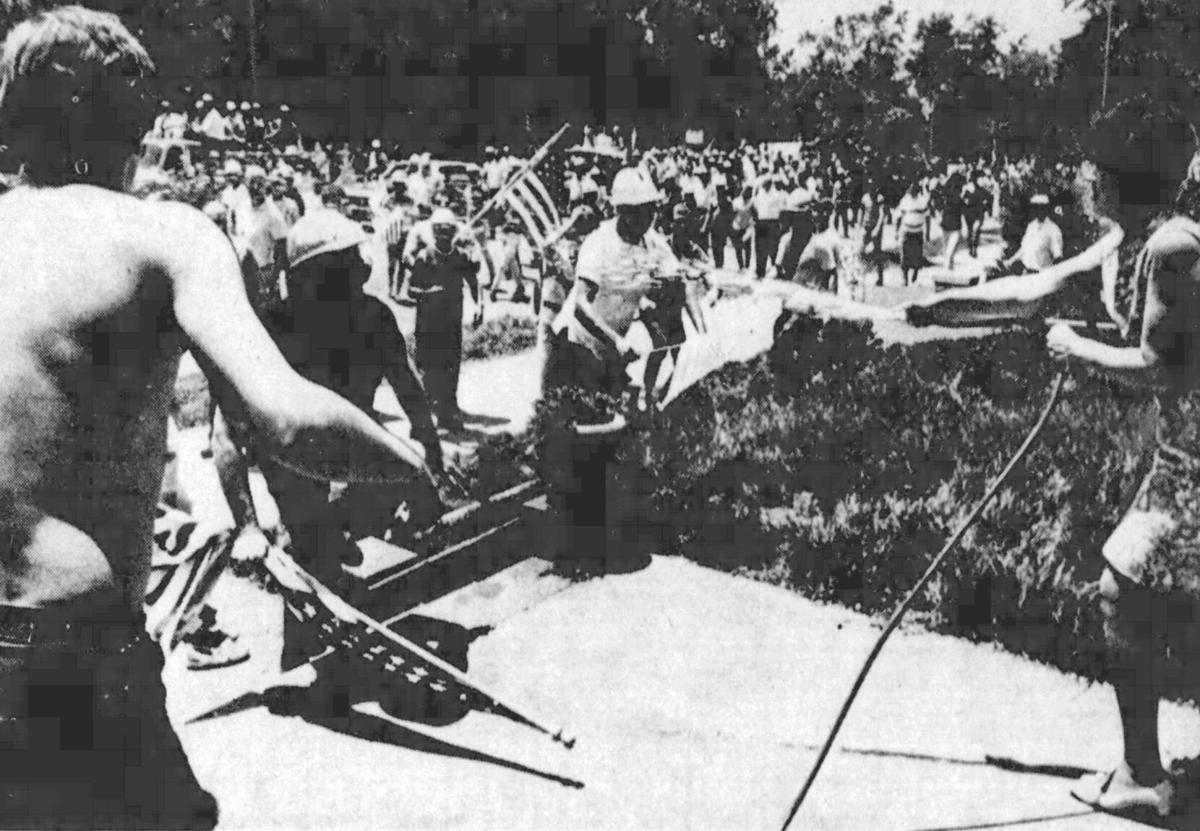 Mrs. William G. Hodel turns her hose on two advancing marchers outsider her home on Lindell on June 7, 1970. The marchers objected to a sign held by Tim Kirby (left), which said "Veterans Against the War." 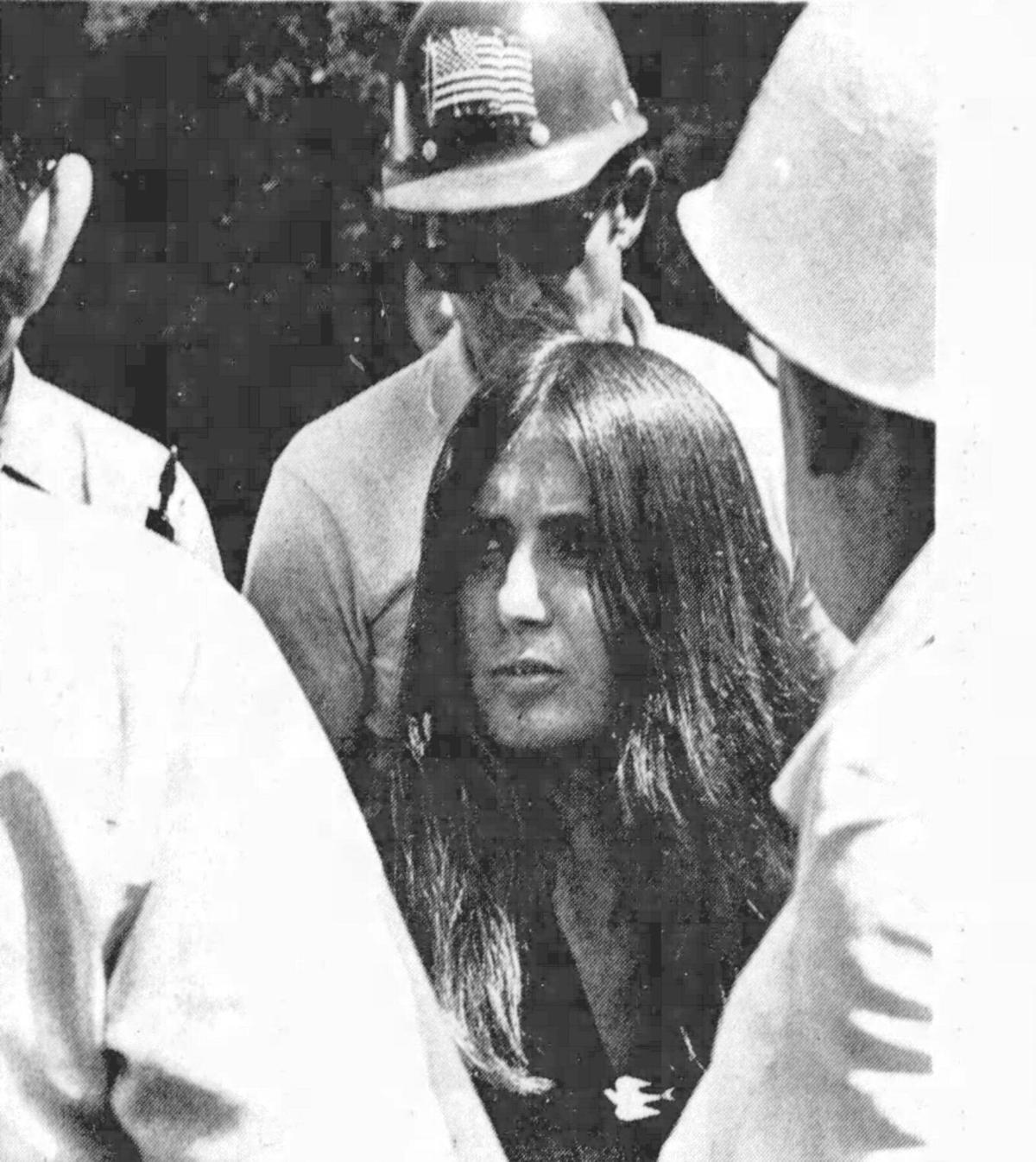 After her peace sign was torn to pieces by some marchers, Dorothy Zych argues with parade participants. Jim Rackwitz/St. Louis Post-Dispatch 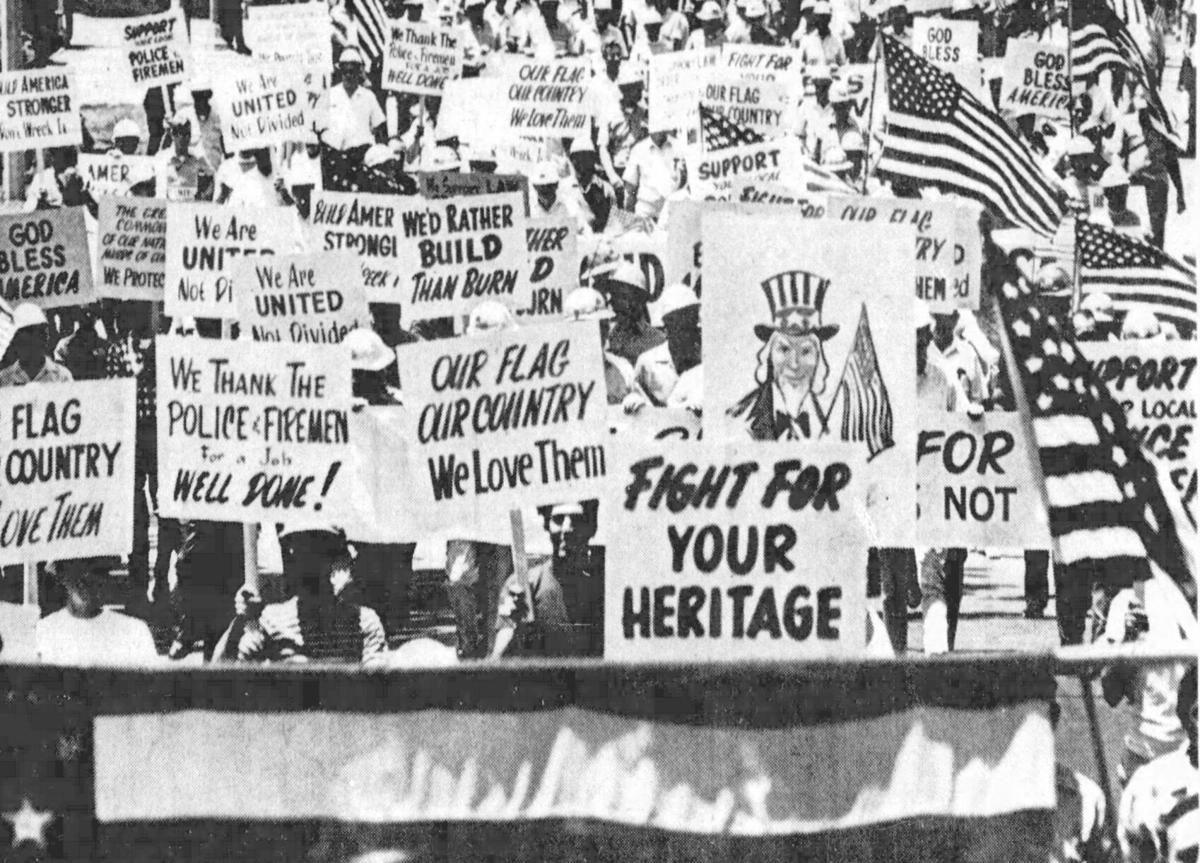 Framed in American flags, members of the "silent majority"  carry a variety of signs as the march on Lindell Boulevard. Larry Williams/St. Louis Post-Dispatch 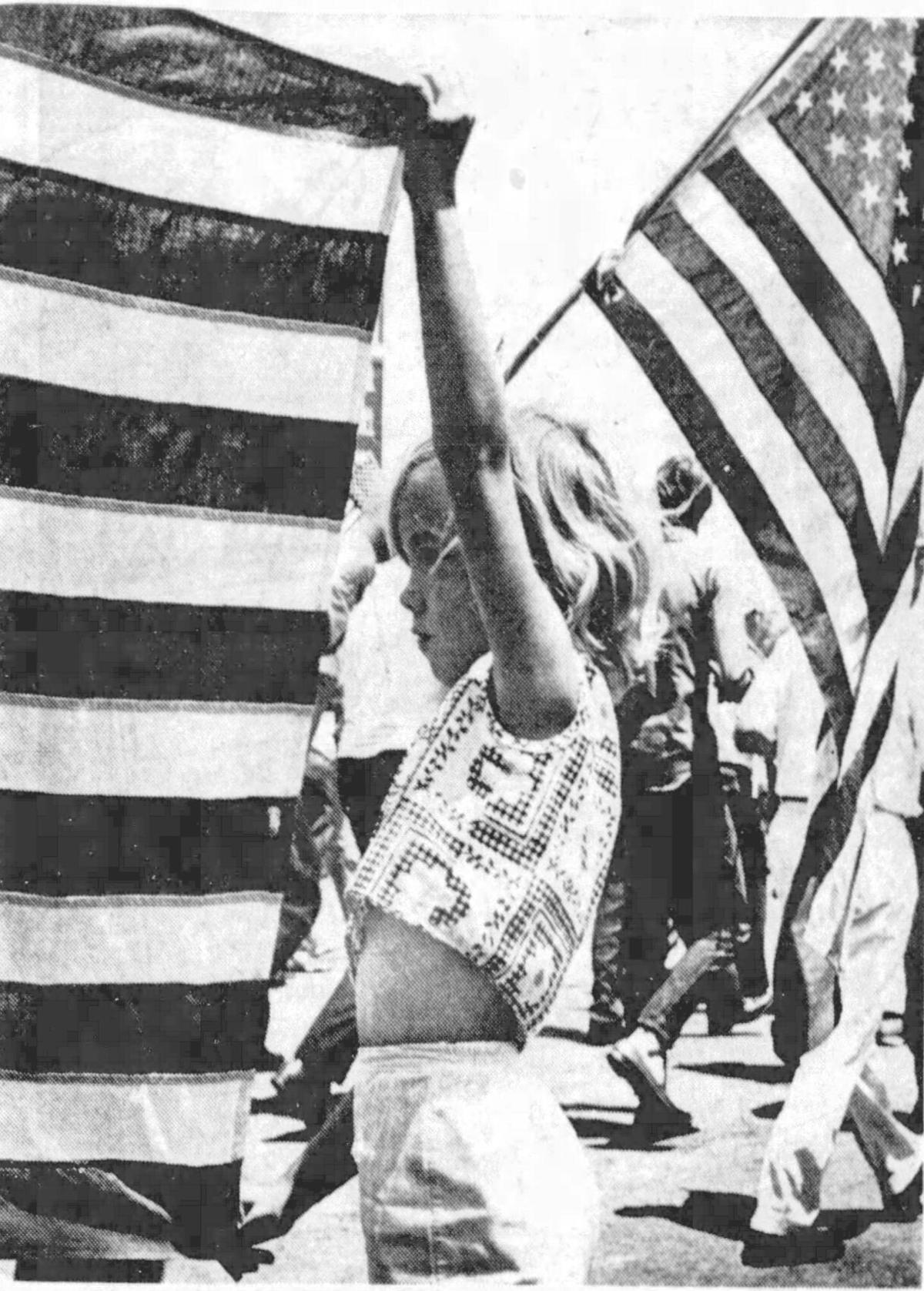