A volley by the St. Louis Light Artillery shattered the respectful silence.

Thus began the funeral procession of Gen. William Tecumseh Sherman, Civil War hero and occasional St. Louisan. For four hours on Feb. 21, 1891, a procession of 12,000 soldiers, veterans and notables marched past mourners on a winding, seven-mile path from downtown to Calvary Cemetery.

Young Capt. Sherman and his bride, Ellen, first moved here in 1850, living near Chouteau Avenue and 12th Street (now Tucker Boulevard). They returned briefly in 1861 when he took a job with a streetcar company. Two weeks later, Fort Sumter was bombarded.

Back in blue Union uniform, Sherman soon became Gen. U.S. Grant's most trusted fellow warrior. Sherman's capture of Atlanta in 1864 was tonic to the weary North and helped save Abraham Lincoln's re-election. His march through Georgia proved there was no safe place in Dixie.

William and Ellen Sherman returned to St. Louis at war's end. Grateful businessmen raised $30,000 to buy and furnish a spacious two-story home for them at 912 North Garrison Avenue, west of downtown. They lived there on and off for 11 of their remaining years.

From the Garrison address flowed a famous telegram. In 1884, Republicans pressed Sherman to be their presidential nominee. He wired back: "I will not accept if nominated and will not serve if elected."

The Shermans later moved to New York but kept their home on Garrison. Ellen Sherman, a devout Catholic, died in 1888 and was returned for burial in Calvary Cemetery. 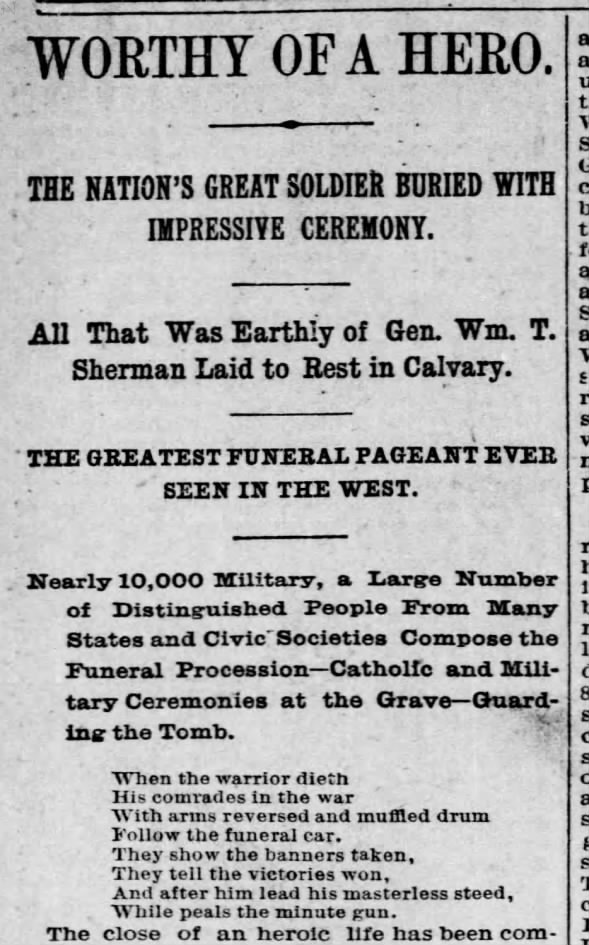 Sherman died at 71 in New York on Feb. 14, 1891. The Pennsylvania Railroad provided its executive train to return the general to his wife's side.

At Union Depot, just east of today's Amtrak station, the casket was placed on an artillery caisson pulled by four black horses. Cavalry escorted it north on 12th, followed by once-wiry veterans of Sherman's own Army of the Tennessee. Other units, including Confederate veterans, joined the solemn clattering over cobblestones.

At Calvary, one of the Sherman children, the Jesuit Rev. Thomas Sherman, recited graveside prayers in Latin and English. An honor guard fired three crisp volleys, followed by a last rumble of artillery from a distant hill.

The Rev. Sherman died in 1933. The Sherman family home eventually became an apartment building and was demolished with barely a whimper of protest in 1974. The Sherman graves are a short drive from the front gate at Calvary.

On February 25, 1966, CBS premiered a TV documentary, "Sixteen in Webster Groves." Many St. Louisans were outraged when the program made most of the parents and teens look self-obsessed. Here was columnist Clarissa Start's take on the program.

90 years ago, readers get their first details about the Lake of the Ozarks

In 1931, the St. Louis Star newspaper shared with its readers news about a huge lake being developed in mid-Missouri.

1966: Two Gemini astronauts are killed in a jet crash in St. Louis

Elliott See and Charles Bassett were the lead crew for Gemini IX, a mission scheduled for May 1966, all part of the learning curve in the race to the moon. On Feb. 28, 1966, with fog and rain covering Lambert, their military training jet approached too high and began a tight swing around the airport, eventually crashing into Building 101 of the McDonnell complex. Both astronauts died in the crash.
History

1876 trial here involved President Grant's aide, who was accused of being ringleader.

August A. Busch Sr., the president of Anheuser-Busch, was suffering from heart problems and gout when he shot himself in his bed at Grant's Farm. He used a pearl-handled .32-caliber revolver he kept by his bed.

1918 • A Post-Dispatch mailroom clerk becomes the first St. Louisan to die in World War I

The first St. Louisan is killed in World War I. David Hickey, 38, a former Post-Dispatch mailroom worker and baseball player, was the first of 1,072 area men to die in the war.

1893: Tesla stuns a St. Louis crowd with his first demonstration of radio

In 1893, inventor Nikola Tesla first publicly demonstrated radio during a meeting of the National Electric Light Association in St. Louis by transmitting electromagnetic energy without wires.

Looking back • The day St. Louisans walked across the frozen Mississippi River

People scrambled across the Mississippi on Feb. 7, 1936, at Gasconade Street in south St. Louis and, a few days later, near the Municipal (now MacArthur) Bridge downtown.

The pilot had radioed that he was low on fuel prior to the crash, authorities said. 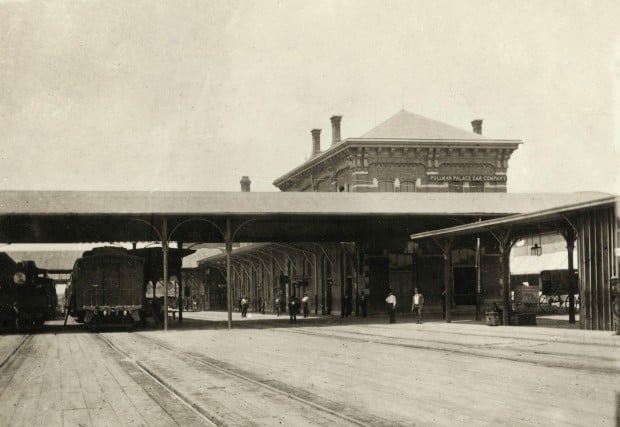 Union Depot, the St. Louis train station from 1875 until 1894, when St. Louis Union Station was opened. The depot was in the Mill Creek railyard at 12th Street (now Tucker Boulevard). The Pennsylvania Railroad provided its executive train to carry Sherman's casket and his family to St. Louis for the burial. Thousands gathered at the depot and along the tracks to await the train, which arrived at 8:48 a.m. on Feb. 21, 1891. (Missouri History Museum) Photograph, ca. 1875. Missouri History Museum Photographs and Prints Collections. N39069. Image courtesy Missouri History Museum 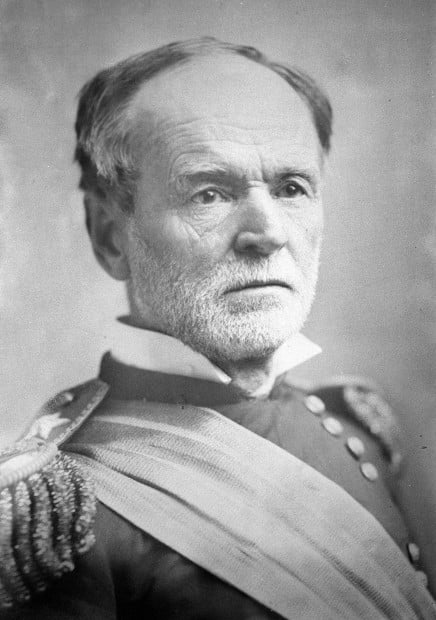 Gen. Sherman in 1888, four years after he retired from the top rank of general of the army. (St. Louis Mercantile Library)
© Copyright 2021 STLtoday.com, 901 N. 10th St. St. Louis, MO | Terms of Use | Privacy Policy
Powered by BLOX Content Management System from TownNews.com.
You don't have any notifications.