The night Washington U. became a flashpoint in the Vietnam War protests
0 comments
Share this
{{featured_button_text}}
BY TIM O'NEIL St. Louis Post-Dispatch

CLAYTON • On April 30, 1970, President Richard Nixon announced that American troops had entered Cambodia from South Vietnam to attack enemy sanctuaries. The next day, at the Pentagon, he praised young people in uniform and mocked "these bums, you know, blowing up the campuses."

Such was the rhetoric of the times. Anti-war protesters waved Chairman Mao's Little Red Book. Nixon's supporters ridiculed the peace symbol as "the footprint of the American chicken." After a decade of assassinations, racist brutality, urban riots, hippies, hard hats and a stalemate war in faraway jungles, everybody's nerves were raw.

The push into Cambodia inspired protests at dozens of campuses and violence at a few. In St. Louis, 300 people marched from Washington University to St. Louis University. Some waved Viet Cong flags and chanted "Ho, ho, Ho Chi Minh," the name of the North Vietnamese leader.

At Washington University, ROTC had been a flashpoint for a year. A mysterious arson had destroyed the Army building Feb. 23. Protesters taunted ROTC students during drills and tried to disrupt their classes.

Hours after news of Kent State, a gathering on the Washington U. campus quadrangle turned surly. Students hindered traffic on Forsyth Boulevard, where one motorist swerved toward them. Marchers slammed his car with their fists as he drove off.

Trouble moved toward the surviving Air Force ROTC building. Shortly after midnight, as 2,500 students chanted "Kent State" from a hilltop, about 30 rushed the building, ransacked it and set it ablaze. Volleys of rocks forced firefighters to retreat. 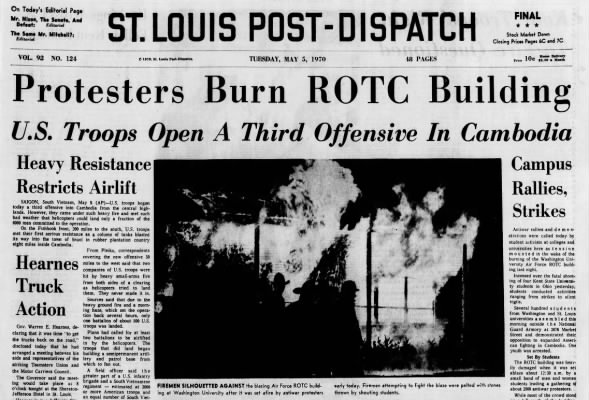 One student was raising a Viet Cong flag on the ROTC pole when police in riot gear forced the rioters to run. The building was gutted.

Twelve students were banned from Washington University, and six were convicted of charges in the riot (one case was reversed). Howard Mechanic, convicted of interfering with public safety officers, went underground in 1972, his alias in Arizona not exposed until 2000. President Bill Clinton pardoned Mechanic the following year.

May 5, 2009: Three murders mark the start of the Christopher Coleman case

On May 5, 2009, Christopher Coleman called police to have them check on his family's welfare. Officers found his wife, Sheri, and their two young sons dead inside. Ultimately, Coleman would be charged and convicted in their strangulation murders

How the feds discovered that Martin Luther King's killer was a small-time St. Louis robber

On April 19, 1968, two weeks after the death of Martin Luther King, the FBI announced it had scanned 53,000 prints and made a hit — James Earl Ray, a three-time loser who had escaped a prison truck in Jefferson City.