Identity of pilot who flew through Arch in 1966 is no mystery, family says
0 comments
Share this
{{featured_button_text}}
1 of 7 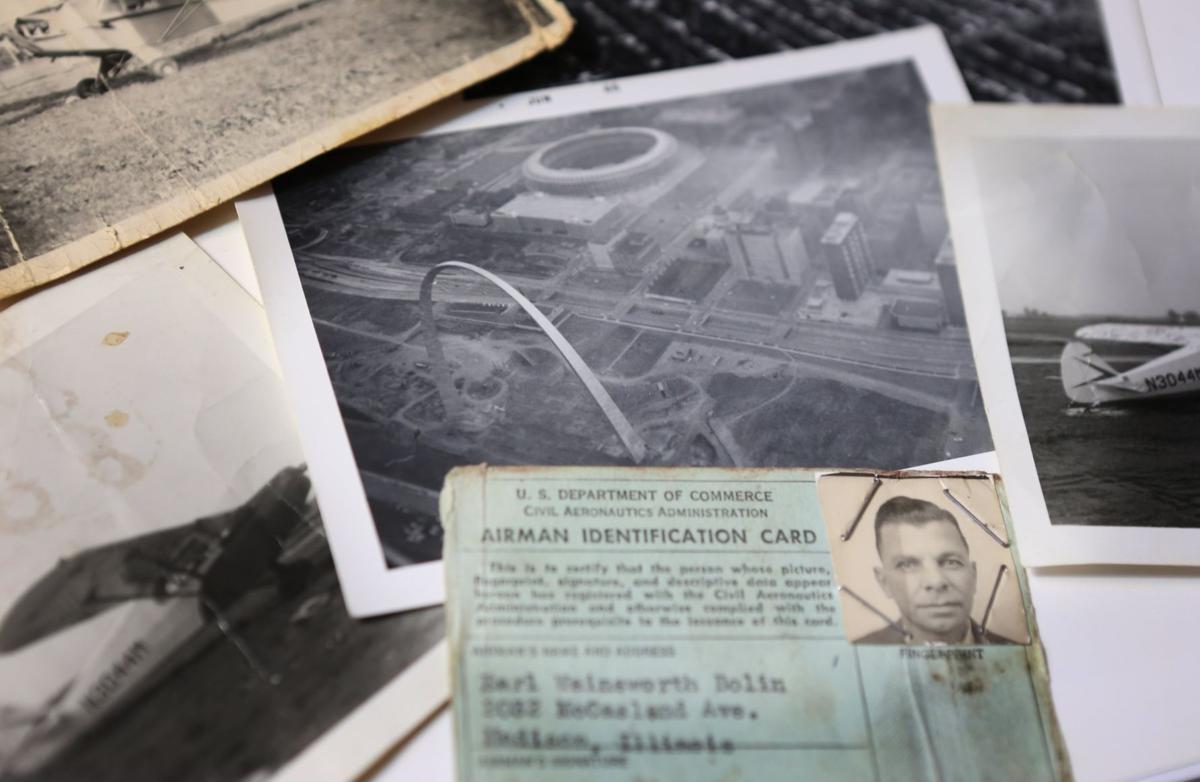 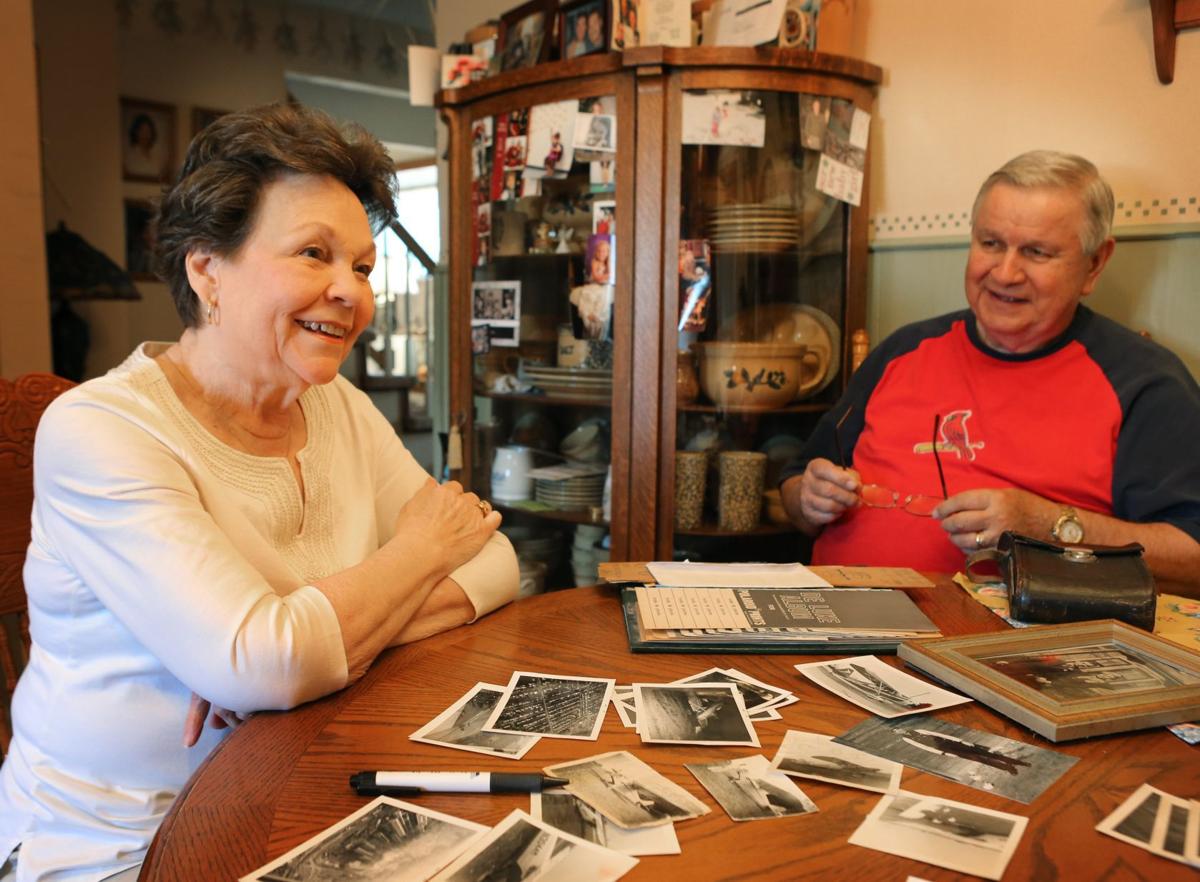 Donna Dorris and Bill Dorris, married 54 years, tell a story about her father Earl Bolin and how he bragged to them he flew his plane through the legs of the Arch in St. Louis in June of 1966 but told them to keep quiet about it so he didn't get in trouble. Photo by David Carson, dcarson@post-dispatch.com 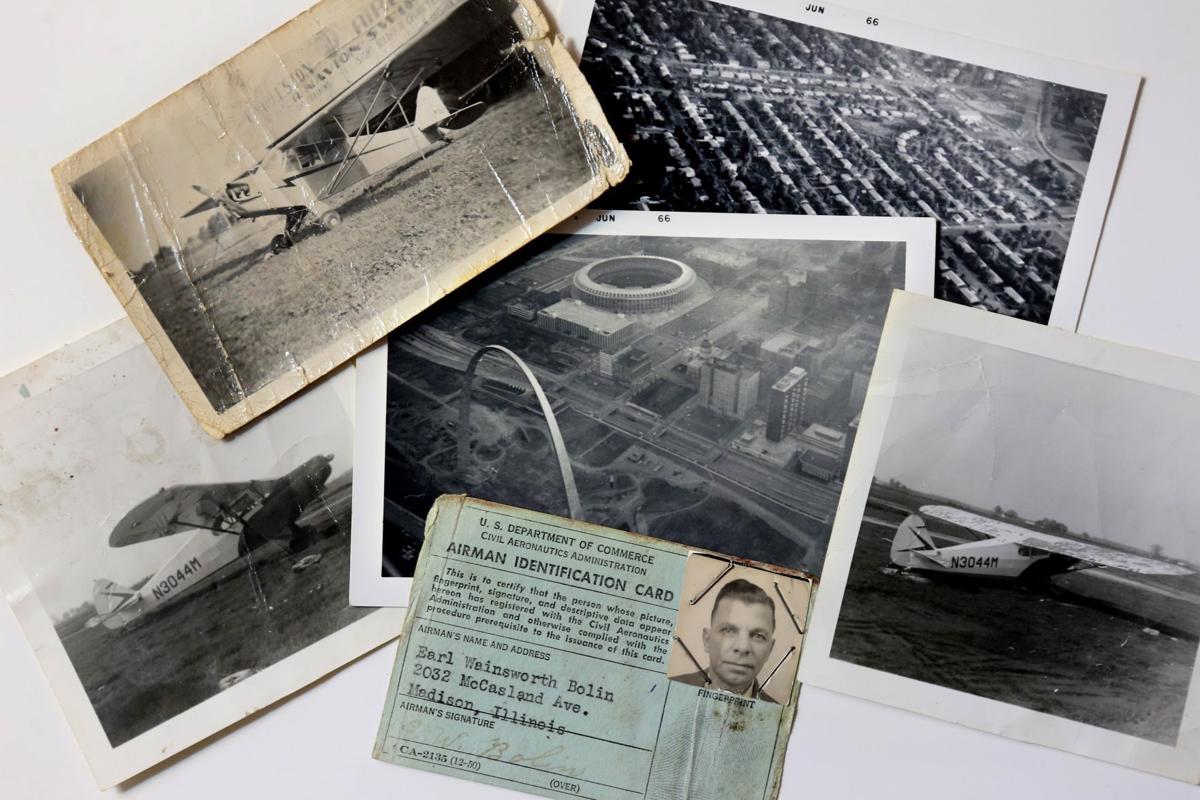 A June 23, 1966 article in St. Louis Post-Dispatch about pilot flying through legs of Arch.

A June 24, 1966 article in the St. Louis Post-Dispatch about a pilot flying through the legs of the Arch.

A June 25, 1966 article in the St. Louis Post-Dispatch about a pilot flying through the legs of the Arch. 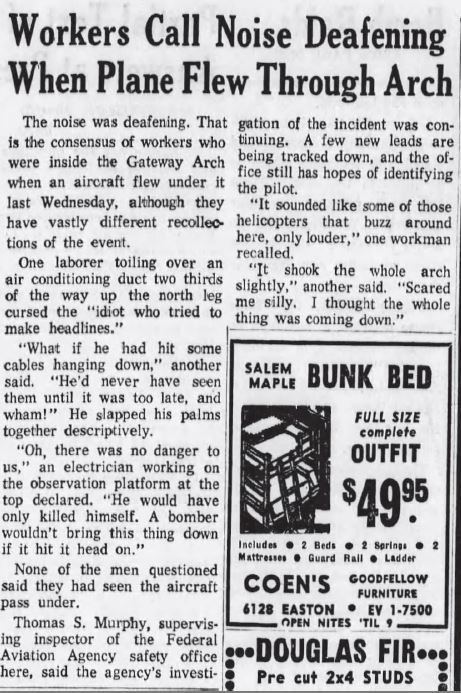 A June 29, 1966 article in the St. Louis Post-Dispatch about a pilot flying through the legs of the Arch

This one begins a little over 50 years ago, on the afternoon of June 22, 1966, near the newly completed Gateway Arch. A group of tourists and a National Park Service guide gawked as a small plane suddenly approached from the west, made a low pass over the Old Courthouse and flew through the legs of the Arch.

It happened quickly. A tourist with a camera in hand couldn’t snap a picture. Laborers inside the Arch jumped at the deafening noise.

“It shook the whole arch slightly,” one worker told the Post-Dispatch at the time. “Scared me silly. I thought the whole thing was coming down.”

Another worker cursed the “idiot who tried to make headlines.”

The pilot zoomed away across the river, toward Illinois. The pilot, the first to fly through the Arch, was never identified.

But Donna Dorris, 75, of Madison believes she’s known who the pilot was since the day of the stunt. She says he was her father, a man she describes as “a little bit adventurous, a little daredevilish.”

The family has held onto the story as a private secret for five decades. But a mention of the 50th anniversary of the stunt in the Post-Dispatch’s “This Day in History” listing prompted them to share this bit of family lore.

When grandson Billy Dorris, of Maryville, saw the newspaper item, he called his mother. “It sounds like Grandpa’s past is creeping up on him. Do you think it’s time to let the secret out?” he asked.

By then, Donna Dorris was willing to share the story.

Her father’s name was Earl Bolin, and he also lived in Madison. He worked in the Nickel Plate railroad yards and flew small airplanes as a hobby. On the day of the flight, Dorris, a young mother at the time, stood in her front yard. Her father, who lived across the street, walked up to her. “You might want to catch the news tonight,” she remembers him saying.

“Well, I went over and flew through the Arch today.”

“Are you kidding me?” she said. “You could have crashed.”

“I know what I’m doing,” he replied. “I haven’t gotten any phone calls. I guess I got away with it.”

That’s just how he was, Dorris recalls.

He was a gearhead who always wore overalls and carried a jar of Old Judge instant coffee every day with him to work. He rode a Harley Davidson Electra Glide for a while, and he got the “flying bug” from his older brother Howard, who taught him to fly and worked in the railroad yards with him. They rode and flew the countryside, having adventures, visiting relatives in central Illinois in Mason and Edgewood, where they grew up.

Dorris, the oldest of three children, didn’t recall the reaction of her mother, Veda, to the adventure. (“She wasn’t really into his flying,” Dorris recalls. “I was a daddy’s girl. Dad was a lot more fun to be around.”) She just remembers her father had been daring himself for a while to do it. He was 54 at the time.

He knew it was a no-no. Almost exactly one year before the flight, the Federal Aviation Agency warned that any pilot who flew through the legs would be severely penalized. The FAA collected the names and addresses of 12 witnesses who saw the flight, and a canvass was started within a 75-mile radius to find the plane and pilot.

“We don’t take this as a joke,” an FAA supervising inspector told the newspaper at the time. “If the plane had hit the Arch or any of the downtown buildings, it would have killed a number of people in addition to the occupants of the plane.”

Nobody caught the entire tail number. The plane flew through the Arch legs at an altitude of 200 to 250 feet. The Arch is 630 feet tall. Bolin told his daughter he had sped up to return to Illinois, where he landed and kept the plane at the now-defunct Lakeside Airport near Granite City. Apparently, the FAA inspectors later passed over him.

Bolin told a few people about the flight, but nobody ever snitched, and Bolin never lost his license. “Don’t say anything to anybody, don’t even talk about it,” he’d say to Dorris’ husband, Bill.

Dorris wasn’t aware there had been a nationwide search for the pilot. She’s sure her father read news reports, though he didn’t mention them to her. Her father’s flight and his sense of mischief became a part of family lore.

Bolin took nitroglycerin pills for heart issues and delighted in keeping them on the dashboard of his plane when he took his son-in-law up. “Don’t worry if I need one of those pills,” he told Bill Dorris. “I’m going to teach you how to fly.”

There are a few open ends in this story. Witnesses reported seeing a twin-engine plane fly through the Arch legs that day. Bolin never owned a twin-engine plane: He had a Cessna and a Piper and a Piper Cub, though the family can’t remember what he flew at the time. The witnesses said the plane might have been green and white or blue and white. Bolin’s survivors don’t recall the colors of his planes.

The family has a set of four black-and-white pictures, dated June 1966, taken from the inside of an airplane. It shows an approach from the north over the Arch, the Old Courthouse and old Busch Stadium in the background. But there are no photos of the plane flying through the legs or approaching it from the west.

There were several copycats in subsequent years — at least 10 more, including one in 1984 by a helicopter whose pilot was identified and sanctioned by the FAA.

The idea of anyone else giving it a shot and getting away with it today, in the age of security cameras and smart phones, seems slim. Penalties would still be severe, with revocation or suspension of the license or civil penalty possible, an FAA spokeswoman says.

Sometimes, when Bill and Donna Dorris sit on their screened-in porch in Madison, just a few blocks from where they all used to live, they’ll hear a small plane buzz by. “There goes Earl Bolin,” they’ll say. “Dad’s gone for a ride.”

Earl Bolin died of emphysema at the age of 59, five years after the Arch stunt.

After a recommendation to disband UMSL's Physics Department, the undergraduate program earned a reprieve.

Officials: Turkey hunter who shot a jogger in St. Charles County may have violated regulation

Hunter told a game warden he fired at a turkey, but some of the pellets hit the man on the trail about 50 to 60 yards away. The hunter may have violated regulations, the report says.

After abandoning efforts to establish its own police force in hopes of repairing relations with area police, Metro has started to collect crime data on the system and release it publicly.

Donna Dorris and Bill Dorris, married 54 years, tell a story about her father Earl Bolin and how he bragged to them he flew his plane through the legs of the Arch in St. Louis in June of 1966 but told them to keep quiet about it so he didn't get in trouble. Photo by David Carson, dcarson@post-dispatch.com

A June 23, 1966 article in St. Louis Post-Dispatch about pilot flying through legs of Arch.

A June 24, 1966 article in the St. Louis Post-Dispatch about a pilot flying through the legs of the Arch.

A June 25, 1966 article in the St. Louis Post-Dispatch about a pilot flying through the legs of the Arch.

A June 29, 1966 article in the St. Louis Post-Dispatch about a pilot flying through the legs of the Arch