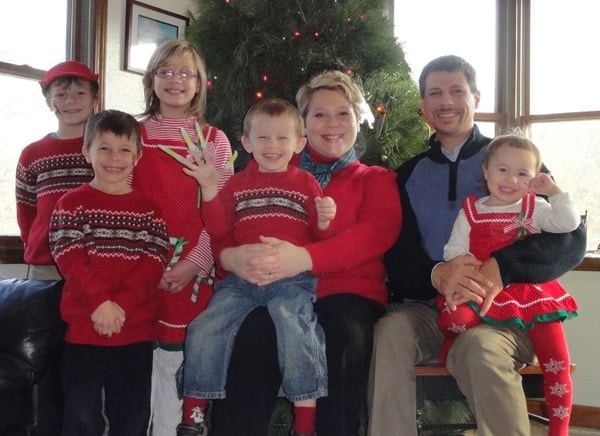 The Decareaux family is shown in this family photo. Dominic is on the left wearing a hat; Grant is next to him. 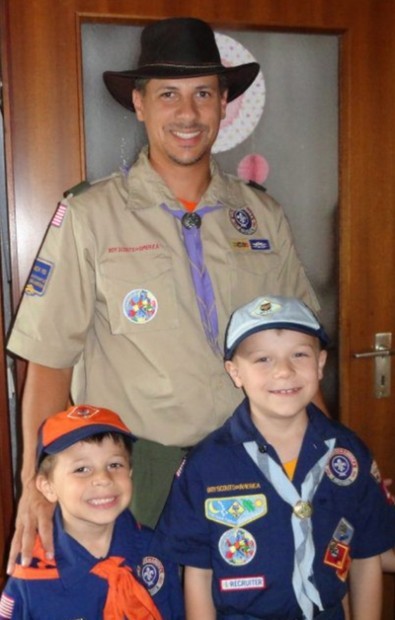 David Decareaux is shown with his sons Grant, left, and Dominic, right.

UPDATED at 1:15 p.m., with new details, photos and comments from family.

REYNOLDS COUNTY, Mo. • A weekend camping trip was a surprise wedding anniversary gift from David Decareaux to his wife Sarah and their five children.

Decareaux, 36, of Millstadt, Ill., had the weekend off from his new job with the Department of Defense at Scott Air Force Base, and he surprised his wife with a cabin he rented for the family in Reynolds County, Mo.

“That was just something they would do,” his father-in-law, Keith Hartrum, of Waterloo, said in an interview today. "They are very adventurous.”

The trip turned tragic when David Decareaux and his two sons died from the cold Saturday night on the Ozark Trail.

They were found Sunday morning in the daylight on the bluffs near Black, Mo., with their 4-month-old Labrador retriever, Bear, who survived. David Decareaux was pronounced dead at the scene. The two boys — Dominic, 10, and Grant, 8 — were carried out of the woods while CPR was administered. They died about 2 p.m. Sunday at a hospital in Ellington, Mo.

"They took my babies and worked on them for more than two hours," Sarah Decareaux said in an interview today, before heading to a funeral home to begin making arrangements.

She said her husband was an experienced hiker but that he did not realize the weather would turn ugly after he and his sons left for their hike on Saturday morning. He had a cell phone and flashlight with him, but both lost power at some point, Sarah Decareaux said.

She wanted all the people who helped search for her husband and sons to know how appreciative she is. Rescue personnel prayed with her during the search on Saturday night.

Prayer and her faith in God, Sarah Decareaux said, are helping her forge ahead.

"We are a Christian family," she said. "I know where they are now."

Reynolds County Sheriff Tom Volner said the extensive searches in the dark by horseback, on foot and by vehicles on back trails and county roads had failed to turn up the missing father and sons Saturday night.

About 10:30 a.m. Saturday, the father and two sons set out for a hike from the Brushy Creek Lodge for Sutton’s Bluff on the Ozark Trail. They were supposed to return by 4 p.m.

“When they took off in the morning, it was near 60 degrees,” Volner said. David Decareaux had on a light jacket, one son wore a fleece pullover and the other a sweater, the sheriff said.

“They were last seen by a passer-by at about 2 p.m. (Saturday) on top of Sutton’s Bluff,” Volner said. “At the time it was raining, and the passer-by asked if they needed a ride. David told the gentleman they could make it back.”

During the course of the day, heavy rain set in, and at night the temperature plummeted. Trails became impassable.

Brushy Creek Lodge personnel called the sheriff’s department between 6 and 7 p.m. Saturday after Decareaux’s wife became concerned. She said that her husband and the boys knew to hunker down in similar bad weather situations and were experienced hikers. But as the hour grew later, they became concerned.

The sheriff’s department organized a search party of about 50 people to scour roads and woods. They searched until about 12:30 a.m. Sunday, when the effort was called off because of fast-rising creeks and flash flooding on roads and creeks.

In the morning, the sheriff put out announcements on a local radio station for additional help. It had rained all night, and when the hikers were found, they were soaking wet. Temperatures had dropped into the 20s.

David Decareaux, who was born in Louisiana, recently joined the DOD at Scott Air Force Base following a 10-year career in the Air Force. The family has three other children, ages 11, 4 and 2.

The family recently bought a home in Millstadt to be close to his job after living on-and-off in Germany for the past decade, Hartrum said.

“David was a very good father and a good provider for his family,” Hartrum said.

Wife says prayer and faith are helping her stay strong in the face of tragedy.

Sign an online guest book for the Decareaux family

The Decareaux family is shown in this family photo. Dominic is on the left wearing a hat; Grant is next to him.

David Decareaux is shown with his sons Grant, left, and Dominic, right.