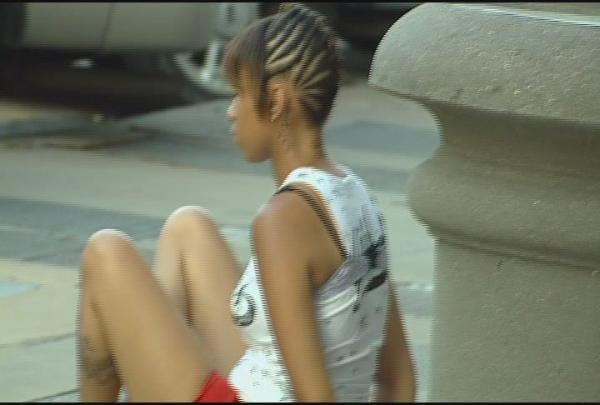 Aug. 31, 2011 - (News4 photo)  Yokeia Smith is being held in jail in St. Louis. The woman was arrested outside the KMOV newsroom on Wednesday evening. 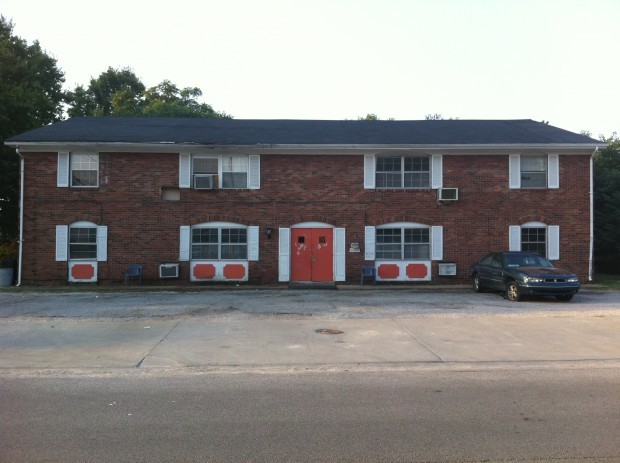 The apartment complex on Lincoln Avenue in East St. Louis where two children were slain Wednesday. Photo by Laurie Skrivan of the Post-Dispatch

UPDATED at 5:20 p.m. with charges from St. Louis incident.

Laura Bluedorn, a KMOV-TV photojournalist, said the victims were a man and his 3-year-old son. They were visiting St. Louis from Iowa.

She said she was loading her truck when she heard a "thud." She looked up in time to see that a man and a boy she said was his son were airborne. She said she was told the two were visiting St. Louis from Iowa.

"They were conscious and breathing," she said. "The kid had a goose egg on his head, and the dad said he had hip and leg pain."

Bluedorn said she saw an older-model, two-door Saturn stop after hitting the pedestrians.

When police arrived on the scene, a witness told them that a woman was crouched between two TV news vehicles holding a shotgun. Police say that woman was Smith. She was taken into custody there.

East St. Louis police Capt. Bobby Cole said Wednesday that authorities received a call about a shooting in the 3000 block of Lincoln Avenue at 6:03 p.m. When police arrived, they found the children dead in a room in an apartment there.

On Thursday, the St. Clair County Coroner's Office identified the girl as Yokela Smith, 4, and the boy as Levada Brown, 5. Autopsies were completed today, but the coroner's office did not release details of findings.

Smith had fled the scene of the shootings before police arrived.

Cole said no motive had been determined for the shootings.

"We don't have a clue why," he said. "Until we go speak with the lady, we won't know anything."

Relatives of Smith also said they had no potential explanation for the slayings of the children.

"I don't know why the babies are dead," said a cousin, Virginia Brown.

Brown did say that Smith had recently been prescribed medication to treat depression or some sort of mental illness.

Lt. James Morrisey of the Illinois State Police said state child-services workers have had dealings with the family in the past, but he declined to discuss a motive for the kilings. The State Police and the East St. Louis police are handling the case together.

Brown, a cousin of Smith, said she had just returned home from work when a man on a bike told her a woman around the corner had killed two children. She didn't think it was Smith, but she went to check out the scene anyway.

Hours after the shootings, Brown and other relatives stood about 200 feet from the apartment where Smith lived remembering her playful, happy children.

They said that in addition to the two children who were killed, Smith had an 8-year-old son who was unharmed.

The apartment where the family lives is in a multi-unit building. It was cordoned off by crime scene tape late Wednesday.

In addition to East St. Louis police, officers from the Illinois State Police, FBI and the Bureau of Alcohol, Tobacco, Firearms and Explosives were on the scene.

Patrick M. O'Connell, Kim Bell and Joel Currier of the Post-Dispatch contributed to this report.

Yokeia Smith, 25, is held in St. Louis and now faces charges in Illinois.

Authorities allege that their mother, Yokeia Smith, killed them with a shotgun.

Woman accused of killing her two children is arrested.

UPDATED: at 12:14 p.m. with photo and comments from grandfather.

ST. LOUIS • The man accused of killing a 3-year-old Missouri girl has a criminal record in Arkansas for threatening to blow up the factory whe…

CLAYTON • Sharnique Jones, a Pine Lawn mother accused of suffocating her 3-month-old daughter in 2008 and injuring her infant son in 2009 was …

Aug. 31, 2011 - (News4 photo)  Yokeia Smith is being held in jail in St. Louis. The woman was arrested outside the KMOV newsroom on Wednesday evening.

The apartment complex on Lincoln Avenue in East St. Louis where two children were slain Wednesday. Photo by Laurie Skrivan of the Post-Dispatch