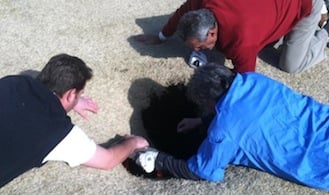 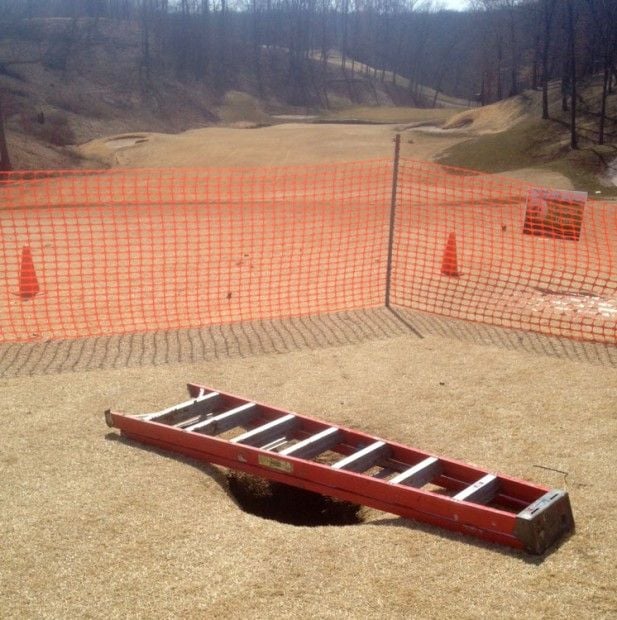 Mark Mihal was injured when a fell into a sinkhole on a Waterloo golf course. 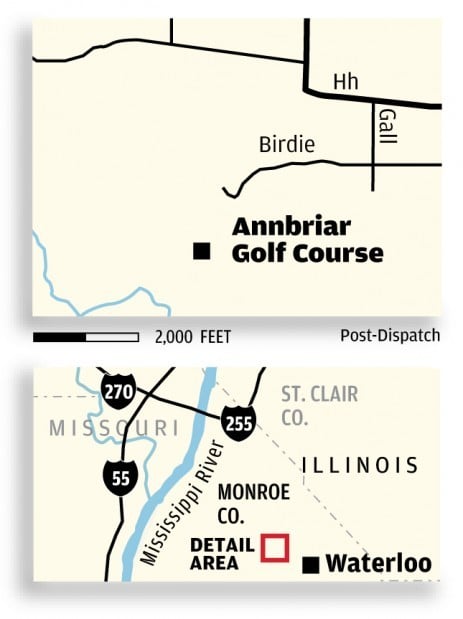 WATERLOO • It sure wasn’t the hole-in-one Mark Mihal had in mind.

While golfing with friends at the Annbriar Golf Course near here Friday, Mihal, 43, a mortgage broker from Creve Coeur, abruptly dropped into the ground on the fairway of the 14th hole. It was the first time a person — and not a ball — has disappeared beneath the turf in the course’s 20-year history.

It also was the first time in the memory of folks who study sinkholes in Illinois that a person has fallen into one.

“I was standing in the middle of the fairway,” Mihal said Monday. “Then, all of a sudden, before I knew it, I was underground.”

Mihal said he fell into the mud floor of an enclosure shaped like a bell, up to 18 feet deep and 10 feet wide. The rescue was precarious, he said, because no one knew whether the surface hole would grow or the enclosure would collapse.

A companion called the course’s pro shop, where general manager Russ Nobbe gathered some rope and a ladder and rushed to the rescue. Mihal had dislocated his shoulder, so Ed Magaletta, a friend and a real estate agent, climbed down and put a rope around Mihal’s waist so he could be hoisted to safety.

The rescue took less than 20 minutes, but Mihal said his mind quickly went to an incident two weeks ago in Seffner, Fla., where a sleeping man dropped into a huge sinkhole that opened beneath his bedroom. Authorities never recovered the body of that victim, Jeffrey Bush, 36.

“That certainly went through my mind when I was down there,” Mihal said. “It looked like it was more room to go down (in the hole). I wasn’t too happy to be in there.”

Find the latest updates on our  free news apps for your iPhone,  Android, Windows phone or BlackBerry.

Mihal is very familiar with the course, northwest of Waterloo, having played it several dozen times over the past 10 years. Before Friday, he said, he was last there for a tournament just after Thanksgiving.

“It’s one of my favorite courses around,” he said. “Always in great shape, with not many houses lining the fairway, diversity in the holes.

“It’s one of the better, if not the best public course in the area.”

Nobbe, the general manager, whose family owns the course, said, “You try to think what you can do to help.” He added, “You’re trying to imagine where in the world there’s a sinkhole on 14.”

Philip Moss, a geologist who has examined the void, said sinkholes are usually visible. But in this case, Mihal said he was standing still as the ground gave way beneath him.

“This guy just really was in the wrong place at the wrong time,” Moss said.

Sinkholes are common in the St. Louis region, he said, because the bedrock here is limestone. It can dissolve in rainwater, which makes an opening he calls a “conduit.” Those large enough to accommodate people are called caves. New openings usually reveal themselves during or right after heavy rain.

“It’s a gradual process that creates a void in the soil,” Moss explained. “Over time, (the void) migrates upward through the soil to where the soil arch gets too thin to support the weight of what’s over it, and it collapses.”

Mihal, an avid golfer who owns a website called golfmanna.com, said he can laugh now, even though the bruises remain. He said he is getting more medical tests to make sure the dislocated shoulder is the worst of his injuries.

When friends ask if he plans to golf again, he says, “Sure.”

But he’s not so sure about Annbriar, explaining, “It’d be kind of strange playing that hole again, for sure.”

Marlon A. Walker covers Illinois general news for stltoday.com and The St. Louis Post-Dispatch. Follow him on Twitter at @marlonawalker

It happened before 6 a.m. near the brewery.

McClellan: A Neanderthal broods at the edge of a sinkhole

Will it swallow his house?

Talk about playing the wrong hole. 43-year-old Mark Mihal is lucky to be alive after he was swallowed up by a sinkhole, that sent him plummeti…

Lefty reliever has regained partial sight after being struck in the eye while playing golf Friday.

Homes are threatened by a huge sinkhole that some believe was caused by a failed salt dome cavern.

Mark Mihal was injured when a fell into a sinkhole on a Waterloo golf course.