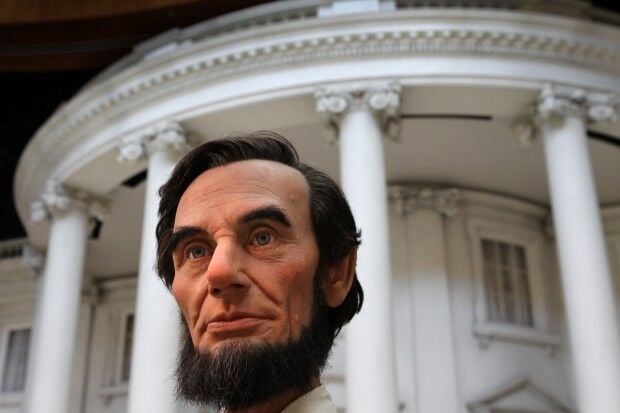 A depiction of Abraham Lincoln stands in front of the White House at the his presidential museum in Springfield, Ill., on Thursday, Nov. 15, 2012. Photo by Robert Cohen, rcohen@post-dispatch.com 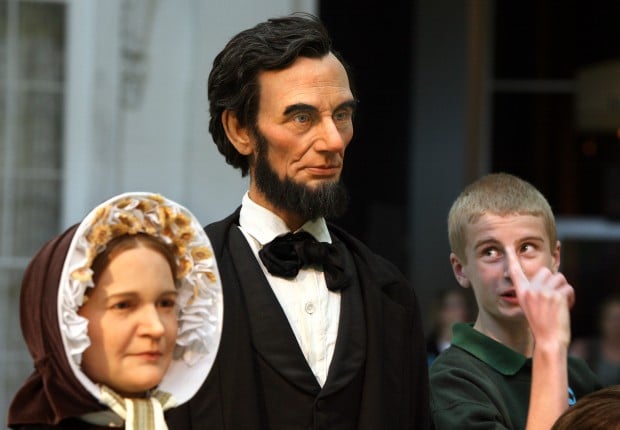 Joe Anthony, 13, compares his nose size with that of Abraham Lincoln during a visit to the Abraham Lincoln Presidential Museum in Springfield, Ill., on Thursday, Nov. 15, 2012. Photo by Robert Cohen, rcohen@post-dispatch.com

By Ben Szalinski The State Journal-Register,

The foundation serves as the fundraising arm of the library and museum, which means it will no longer handle fundraising duties or purchasing items for the museum’s collection. Each organization placed blame on the other.

“The ALPLM feels it is vital for the Foundation to disclose how much money it raises, where that money goes, and what fundraising plans are in the works to support this institution. The Foundation is unwilling to provide satisfactory answers to those questions,” the ALPLM said in a statement.

The Foundation shot back, saying “the State and ALPLM were inconsistent, unreasonable and threatening in their demands, and spreading misinformation about the Foundation, leading us to question if they were indeed negotiating with us in good faith.”

Erin Carlson Mast, the head of the foundation, said the agreement it was in with ALPLM was “radical” and “one-sided.” It was looking forward to ALPLM having new leadership for it to work with.

The Foundation was founded in 2001 to raise the money to allow the ALPLM to open. Since then, the foundation has raised $42 million for ALPLM.

The two groups had a deadline of March 31 to reach a relationship. The foundation wanted to extend the deadline, which it said the state of Illinois and ALPLM refused to do. The foundation’s understanding on March 31 was that negotiations would continue and it was “blindsided” by the museum’s announcement Thursday.

“We are puzzled and disappointed at this entirely avoidable outcome. We are especially shocked and dismayed that, on March 31, the State and ALPLM unilaterally moved to evict the Foundation from our offices,” the foundation said.

The museum said there was little choice but to move the foundation out of its space when the agreement expired.

Both sides said they were open to future negotiations. However, the foundation wants to wait until the new director of the ALPLM takes over in June. ALPLM said the change will have “little effect” for visitors. Items purchased by the foundation for the museum are part of a separate agreement. Memberships sold through the foundation will continue to be honored until they expire or March 31, 2022, whichever comes first.

“We’re optimistic we can find a way to overcome to disagreements and come to an agreement,” Carlson Mast said.

The relationship between the two organizations has been rocky in recent years. In 2007, the Foundation purchased a stove pipe hat that was said to belong to Lincoln. However, a study completed in 2019 found no evidence it was ever owned by the former president. The hat was a piece in a $25 million purchase of what is known as the Taper Collection. The debt the foundation incurred because of the hat became a burden to both organizations in recent years.

There were fears the artifacts from the $25 million purchase, which included blood-stained gloves Lincoln had in his pocket when he was killed, would have to be sold off to deal with debt. In 2019, the foundation got an extension on the loan to October 2022 to repay $8.8 million.

Greg Hosp reached the milestone this month, shortly after he was promoted to sergeant for the Fairview Heights police force.

Hunter Vincent was swimming in the Big Creek in Iron County, Missouri, on May 29 when he submerged and was found a short time later.

A depiction of Abraham Lincoln stands in front of the White House at the his presidential museum in Springfield, Ill., on Thursday, Nov. 15, 2012. Photo by Robert Cohen, rcohen@post-dispatch.com

Joe Anthony, 13, compares his nose size with that of Abraham Lincoln during a visit to the Abraham Lincoln Presidential Museum in Springfield, Ill., on Thursday, Nov. 15, 2012. Photo by Robert Cohen, rcohen@post-dispatch.com