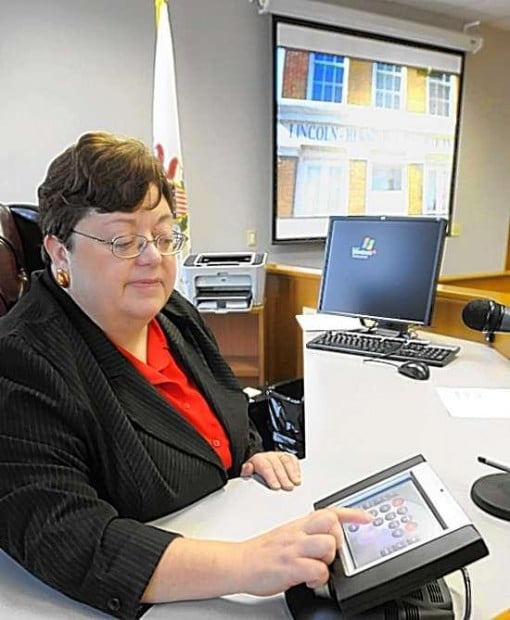 Judge Barbara Crowder uses a control pad installed on her bench in Courtroom 302 in the Madison County Courthouse in this 2009 photo by John Swistak Jr. of the Suburban Journals 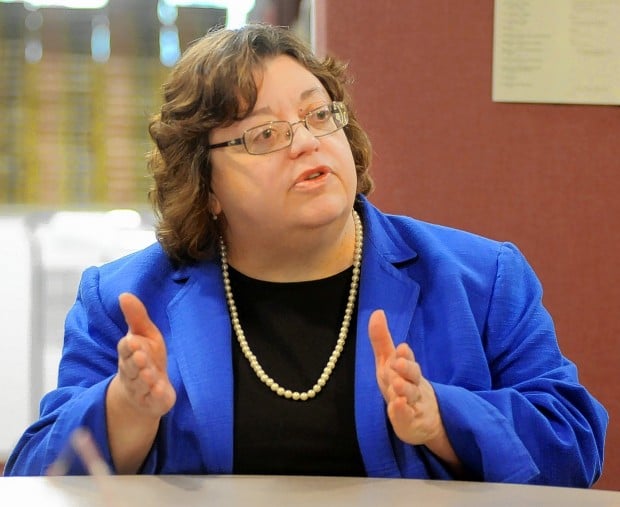 Barbarba Crowder in an October 2011 photo by John Swistak Jr. of the Suburban Journals.

EDWARDSVILLE • Contributions that suddenly poured into the political fund of a judge in charge of Madison County's high-stakes asbestos litigation led to her abrupt reassignment this week and promise Wednesday to return the money.

Circuit Judge Barbara Crowder issued a statement that the $30,000 donated over two days by lawyers specializing in asbestos injury claims "was not related to, or coordinated with, my activities on the bench."

Crowder is running for retention next year, meaning she must get at least 60 percent approval on a ballot question of whether to keep her.

The money arrived Dec. 5 and 6 from lawyers with three local firms whose specialty draws the business of a significant percentage of asbestos plaintiffs from around the country.

On Dec. 1, Crowder had distributed 2013 trial dates in the county's unusual system that allots blocks of court time to law firms in anticipation of cases that may not even yet be filed. Those firms received most of the slots, as they had requested.

"A situation was brought to my attention, and following consultation with the circuit judges we unanimously decided to change some civil assignments to maintain the public trust in a fair and unbiased judiciary," Callis wrote in a statement explaining the move.

She declined to discuss it Wednesday or say whether a complaint had been filed with the Illinois Judicial Inquiry Board.

Crowder issued her own statement Wednesday, saying "Unfortunately, the timing of some campaign donations and the entry of a scheduling order have led some to speculate that there might be some relation between them." She added, "Nothing could be further from the truth."

She also said her husband, Lawrence Taliana, would step down as campaign chairman.

Crowder took over the asbestos docket when Circuit Judge Daniel Stack retired last year. He could not be reached Wednesday. Records show he raised about $38,000 in 2003, largely from attorneys or law firms, in the run-up to his last retention election.

It is illegal in Illinois to give money to candidates in exchange for official actions, but the law does not specifically ban donations that merely have an appearance of conflict. Casinos and utilities routinely give to legislators who regulate them, and it's common for lawyers to give to trial judges, who run for retention every six years.

Ed Murnane, president of the Illinois Civil Justice League, a business-supported organization often critical of the Madison County courts, said he was mystified by Crowder's circumstances.

"It's a major blunder," he said. "How insensitive or out of tune or out of touch can you be?"

He said that his organization had high regard for Callis and Stack and that he thought Crowder would do a good job, too.

Lisa Rickard of the U.S. Chamber of Commerce Institute for Legal Reform, said a "compromised system" was at fault.

"For at least a decade, the Madison County asbestos docket calendar has assigned case slots to plaintiffs' lawyers without actual court cases, creating a type of asbestos lawsuit futures market of immense value to those plaintiffs' firms who have been assigned court slots," Rickard said.

"It is this compromised system that is the root of the cash-for-trials scandal which caused Judge Crowder's reassignment."

Elizabeth Heller of the Goldenberg Heller firm, who made one of the $5,000 contributions, called Crowder "hard-working and unbiased" and said the firm was "very disappointed" she was no longer on the asbestos docket.

Mike Angelides, managing partner of the Simmons Firm in Alton, said it had a history of supporting Democrats, including Crowder.

"There have been three different judges assigned to the local asbestos docket over the last decade, and it has always been a fair and efficient forum for plaintiffs and defendants to have their cases heard," Angelides said. "We expect that will continue."

But Travis Akin, executive director of Illinois Lawsuit Abuse Watch, said: "This is indicative of some of the reasons why Madison County has consistently been a part of the annual 'judicial hellholes' report. How can there be a fair playing field when personal injury lawyers are being allowed to essentially stack the deck in their favor? It would be like a referee officiating a game who has been paid by one side."

Madison and St. Clair were elevated to fifth place on the American Tort Reform Association's list of "judicial hellholes" in a report to be released today. The counties were on the "watch list" of the pro-business lobby group last year.

According to State Board of Elections records, Crowder's fund never reported more than $70,000 on hand at one time. The $30,000 was its first new money in more than four years.

Crowder set up a campaign committee in January 2006 and raised more than $63,000 in the first half of that year, mostly from lawyers and law firms. By mid-2007, records show, her committee had spent down all but $5,825, the balance that remained until Dec. 5.

Circuit Clerk Matt Melucci said there were 2,041 asbestos cases pending in the county as of Wednesday. He said 628 had been filed in 2011 through Sept. 30; the total number last year was 752.

Kevin McDermott and Nicholas J.C. Pistor of the Post-Dispatch contributed to this report.

Illinois law allows the donations, but the issue exhumed old questions about how the state's cash-heavy campaign system might affect the bench.

Clerks ran court while a St. Louis judge was on vacation overseas

The county board chairman says an impartial review is needed.

Volunteer lawyers are working with the Madison County court system to create a new way for low-income residents to receive free legal services.

Justice may be blind, but Madison County jurors will view evidence more clearly as seven courtrooms have received a $275,000 upgrade.

Judge Barbara Crowder uses a control pad installed on her bench in Courtroom 302 in the Madison County Courthouse in this 2009 photo by John Swistak Jr. of the Suburban Journals

Barbarba Crowder in an October 2011 photo by John Swistak Jr. of the Suburban Journals.