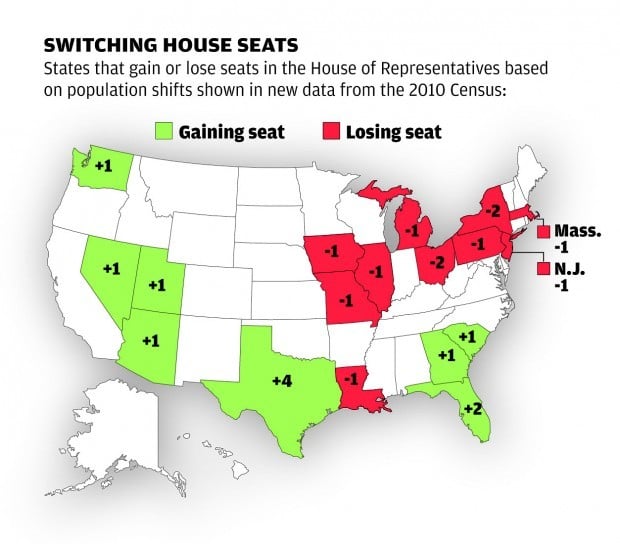 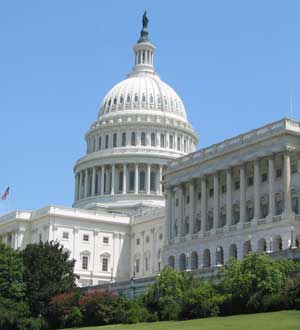 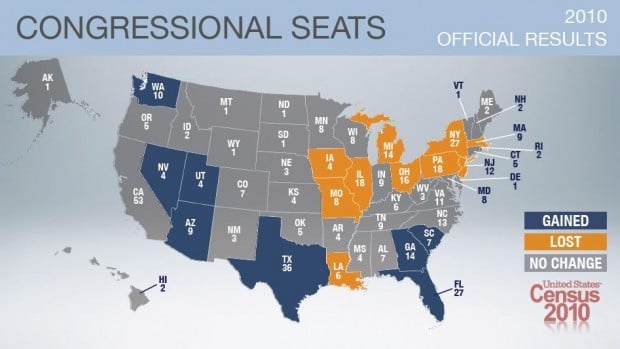 WASHINGTON -- Slow population growth will reduce national political influence in both Missouri and Illinois starting in 2012, as Census Bureau figures released Tuesday cut each state’s congressional delegations by one.

Missouri will drop to 8 congressional seats from 9; while Illinois will lose one seat and drop to 18. The drop also means each state loses a vote in the Electoral College that formally elects the president. The losses will kick off intense political battles in both states as state legislatures convene to redraw the congressional boundaries early next year.

With each state losing a seat, the redistricting process will be a quest for power, as both parties seek to create districts that are safe for existing incumbents. At least one incumbent will be out of luck in each state and would have to face another incumbent in either a primary or general election to battle for the right to go back to Congress in 2012.

Missouri and Illinois were among ten states losing seats. Eight states, led by Texas (plus 4) gained seats. The population gains in Missouri (7 percent) and Illinois (3.3 percent) were insufficient to keep pace with growth elsewhere.

The Census report reflected a continuing population growth shift away from the Midwest.

The results showed "the very first decade in our country's history that the West region is more populous than the Midwest," said Census Director Robert Groves.

The total population of the United States, Census officials revealed, is now 308,745,538.

Every 10 years, the constitution requires states to reconfigure their congressional districts based on shifting populations, and the battle is generally intense as Republicans and Democrats seek to create districts beneficial to holding on to seats or gaining new ones.

For Missouri in particular, the redistricting battle has the potential to be a nasty fight. With the Census numbers in hand, it will fall to the Republican-controlled Legislature to pass a bill that redraws boundaries.

But for those boundaries to stick, they’ll have to pass muster with Gov. Jay Nixon, a Democrat, who could veto the bill and send the issue to court.

Incoming Republican Speaker of the House Steve Tilley, R-Perryville, has said he expects to move a redistricting bill out of the House as one of his first priorities. The reality, however, is that the process might take longer than Tilley hopes. That’s because the Census Bureau won’t release a second set of more specific precinct-by-precinct numbers until about March, and those details will be needed as lawmakers carve up counties and neighborhoods.

The redistricting bill will start with a committee led by Rep. John Diehl, R-Town and Country. Diehl has said he expects the process to be "open and transparent."

While the House and Senate are holding hearings, representatives of the various congressional office holders trying to hold on to their seats will be quietly horse-trading in the background.

After defeating Republican Ed Martin in a competitive race this November, Rep. Russ Carnahan, D-St. Louis, could find himself as the odd man out among the state’s congressional delegation.

That’s because fellow Democrat Rep. Lacy Clay will likely need to add population to his district and will target the Democrat-rich precincts of St. Louis city that helped Carnahan keep his 3rd District seat in the most recent election.

And Republicans will likely seek to carve up the rest of the district and divide it among GOP incumbents Todd Akin, Blaine Luetkemyer, and Jo Ann Emerson.

"If they follow the federal rules to make the districts ‘contiguous and compact’ then the old Gephardt district is clearly the most vulnerable," said St. Louis University political science professor Ken Warren.

The last time Missouri went through redistricting, prominent Democrat Richard Gephardt was the congressman from the 3rd district. As a member of Democratic leadership in the U.S. House, Gephardt exerted quite a bit of influence over how the congressional boundaries were redrawn, creating a district that was very safe for him.

Warren, who has testified in federal court cases involving redistricting, said Republicans will likely try to carve out Democrats in Carnahan’s district and move them to Clay’s district.

"You can draw that district in such a way that Russ loses," Warren said.

Carnahan said he hopes lawmakers work to make sure St. Louis still has fair and diverse representation in Congress.

"This is just the first step in a long process. My hope is that everyone involved is focused solely on making sure the map is drawn in a way that best serves the people and communities of Missouri. After all, you have to draw the lines according to where the people are," he said.

Martin, the GOP candidate who narrowly lost to Carnahan in November, said he was disappointed in the news and blamed job losses for insufficient population growth.

"Going forward, I will look for any way that I can help hold Washington and Jefferson City more accountable and get the elected officials to pay attention to us," he said.

St. Louis Mayor Francis Slay reacted to the news on his blog:

"I have heard plenty of speculation, mostly by their partisans, that a new map would pit US Representatives Lacy Clay and Russ Carnahan, each of whom represents part of St. Louis and St. Louis County, against each other in a primary in 2012," Slay wrote. "I think it is equally possible that the change happens in some other part of the state."
As lawmakers redraw the congressional boundaries, there are several key concepts that guide their work, based on years of court cases. The first, and most important, is that each congressional district have nearly equal population. A difference of even a few voters could be enough for a judge to toss out the boundaries.

Also, the federal Voting Rights Act protects districts of largely African-American voters from being carved up. That law likely means Clay’s district, and that of fellow Democrat Emanuel Cleaver in Kansas City, are safe from too much change.

Next, lawmakers must follow the "compact and contiguous" standard mentioned by Warren, and they have to take into consideration "communities of interest."

Illinois saw its congressional delegation shrink to 19 after losing seats after each of the last two census counts and officials braced for losing another one. But Illinois' remapping will have a different dynamic than Missouri's and many other states: Illinois is among the states where Democrats retained power in the General Assembly in the November election and therefore Democrats control the redistricting process.

After the banner Republican year, Democrats in Springfield would have four GOP first-term members in Congress to target, among them Rep.-elect Bobby Schilling, of Rock Island, who will be sworn in next month in Illinois' 17th District. Schilling will occupy Illinois' most bizarrely drawn congressional district, which would seem to offer Democrats one solution. It snakes from the Quad Cities along the Mississippi River as far south as Madison County with tentacles reaching east as far as Decatur in central Illinois.

Democrats could eliminate Schilling's district altogether or make it more Democratic by removing Republican areas and shifting them to the already safe GOP district represented by John Shimkus, R-Collinsville. They could also draw the new map in a way that forces a primary between Schilling and Rep. Aaron Schock, a second-term Republican from Peoria. That would eliminate a Republican from the delegation, one way to begin evening the odds after Republicans took an 11-8 majority as a result of GOP successes in November.

No matter what lawmakers do, Warren said, the whole matter is likely to end up in court.

"In redistricting, there are always winners and losers," Warren said, "and the loser frequently sues."

Much of Russ Carnahan's 3rd District would be swallowed by the 1st District, currently represented by William Lacy Clay.

The hearing for citizens will be on April 18.

Edwardsville will be gaining a new Madison County Board representative next year under a proposed redistricting plan.

Rep. John Diehl: Every congressional district will be affected by redistricting