‘Mayhem’: 4 police officers shot during long night of violence and destruction in St. Louis
0 comments
Share this
{{featured_button_text}}
1 of 3 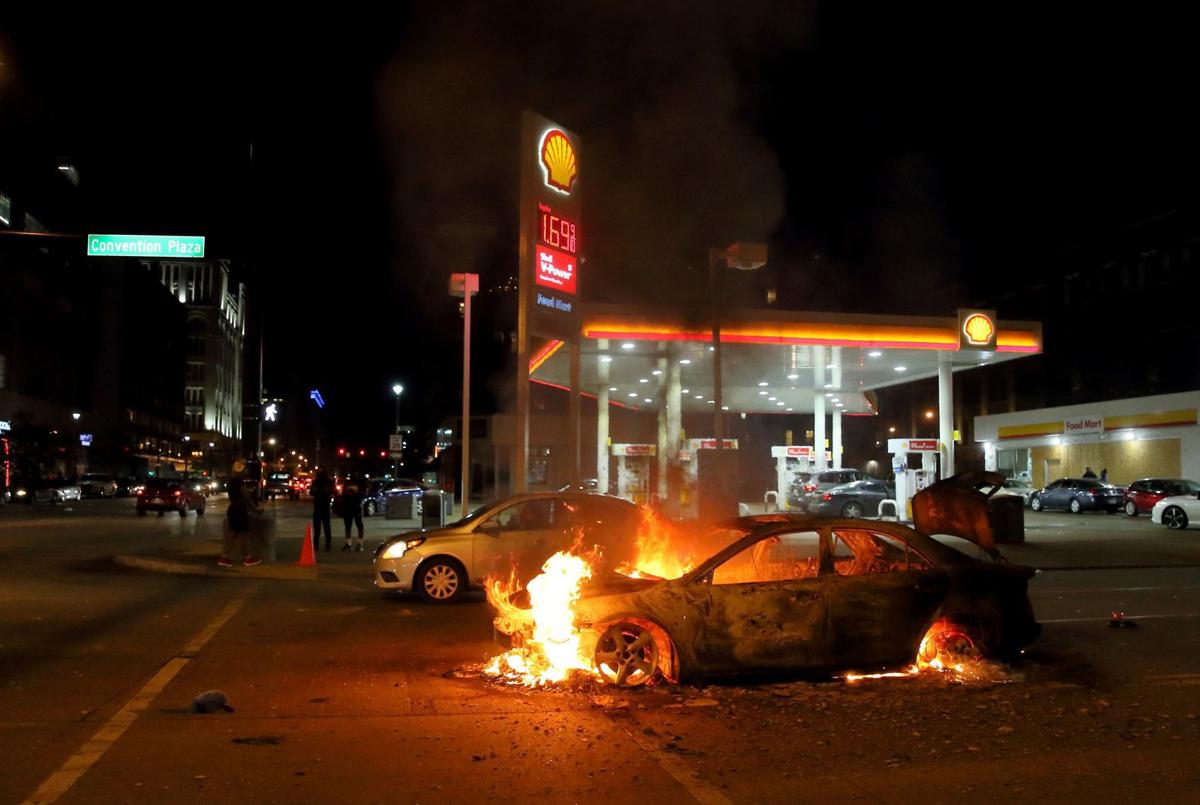 A car burns at the corner of Martin Luther King Boulevard and Tucker Boulevard on Tuesday, June 2, 2020. After a peaceful day of protests things devolved into full scale riot with looting, fires and 4 police officers shot. Photo by David Carson, dcarson@post-dispatch.com 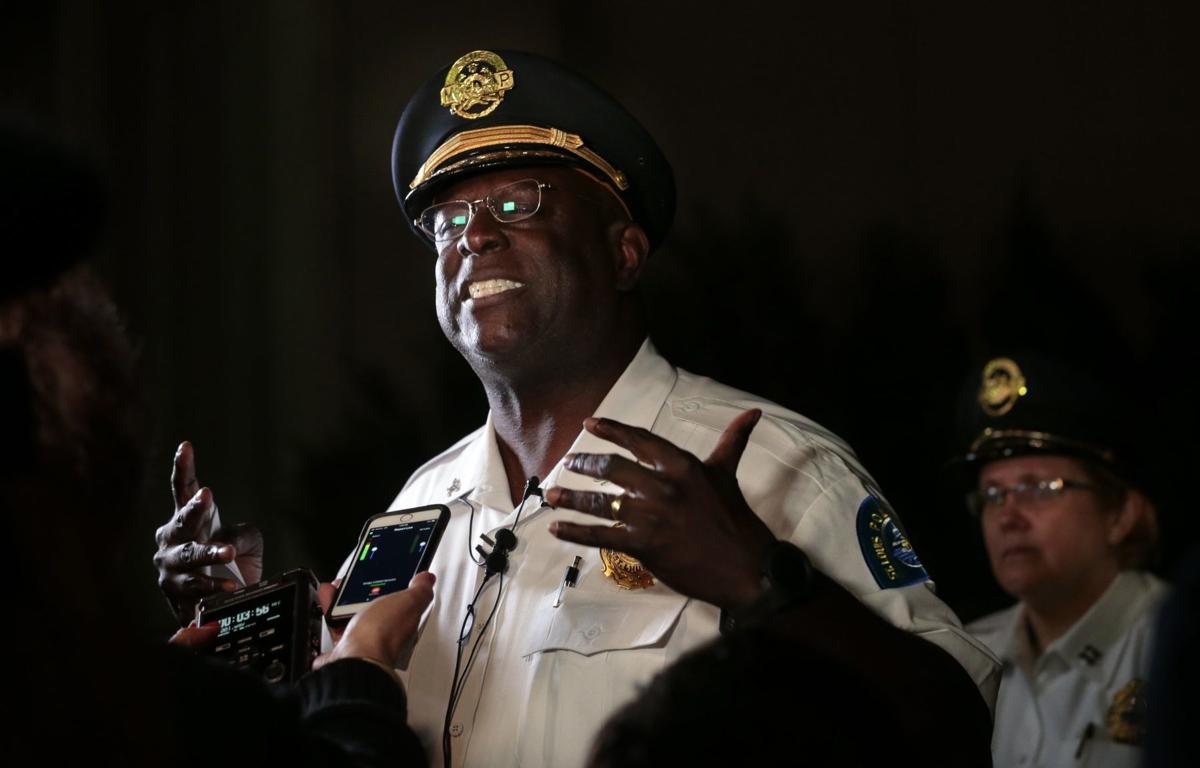 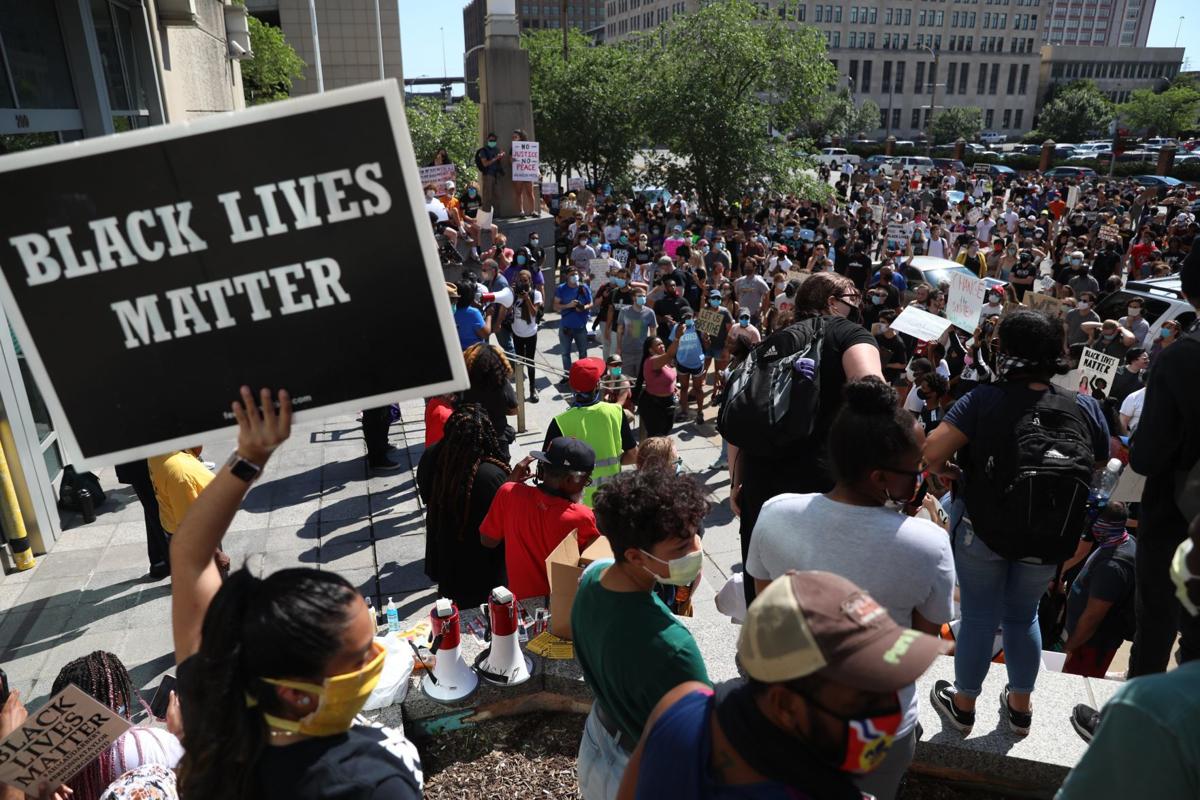 Protesters in downtown St. Louis at the City Justice Center shout "No justice, no peace" during a rally on Monday, June 1, 2020. Protests across the country continued after the death of George Floyd who was killed in police custody in Minneapolis on May 25. Photo by Colter Peterson, cpeterson@post-dispatch.com

ST. LOUIS — Four police officers were shot in downtown St. Louis early Tuesday as a day of peaceful protests turned into a violent and destructive night in the city.

Hundreds of people had gathered across the St. Louis region Monday to protest the Memorial Day death of George Floyd in Minneapolis. A rally in O'Fallon, Missouri, drew upward of 2,000 people and featured marchers walking arm-in-arm with police officers.

But tensions rose after the sun fell in downtown St. Louis.

Just after midnight, four officers, all men, were shot near 16th and Olive streets. All four were conscious and authorities said their injuries were not thought to be life-threatening.

An exasperated Hayden said he was trying to make sense of the night's "mayhem."

"I don't know what else to say," Hayden said. "This is horrible."

Chief Hayden provides an update on 4 of our officers who were struck by gunfire tonight during the downtown unrest. https://t.co/Ml1CgIikHf

By 7 a.m. Tuesday, the faint smell of tear gas still hung in the air near where the officers where shot. On Tucker Boulevard, where businesses were looted, shell casings and bullets still littered the ground and piles of ash dotted the street where trash containers and other debris had been set ablaze. People were just beginning to come outside to begin another day of cleanup.

Several other downtown businesses were damaged, including the 7-Eleven at 201 N. 17th St., which was looted and set afire about 9:30 p.m.

St. Louis fire Chief Dennis Jenkerson said firefighters were slowed by protesters in responding to the fire at 7-Eleven.

“We had people lying down in the street,” Jenkerson said, adding that trash cans were rolled into the street that became obstacles for fire trucks to maneuver around.

The Campbell House Museum, at 1508 Locust Street, also had a small fire in the back of the building.

Several stores on Tucker Boulevard and Washington Avenue were burglarized and vandalized, including Fresh Image, a frozen yogurt store, and Sprint and Boost stores.

"We tried to be peaceful already and that didn't work," Dustin Johnson, a 20-year-old downtown resident, said shortly before midnight.

Rallies in downtown St. Louis, Ferguson and O'Fallon were largely orderly. Traffic was temporarily disrupted on Interstate 64 (Highway 40) when protesters marched onto the highway from the Gateway Arch at rush hour. There were isolated cases of damage to sheriff’s vehicles and broken building windows in St. Louis.

Greg Turner said he traveled from Belleville to join the protest and advocate for changes to the way police are trained, hired and fired.

“The idea of a man being killed for no reason, for what was essentially a citation, and the ease with which he was killed — that’s a problem,” Turner said.

The 46-year-old Floyd died after a convenience store clerk called police about a customer who attempted to pass a counterfeit $20 bill. Several officers held Floyd down in an apparent effort to take him into custody and one knelt on his neck for more than five minutes. An autopsy determined asphyxiation was a cause of his death.

Jennifer Lunceford of St. Louis came to the protest with friends because they were “sick and tired of being sick and tired.” But the decision to come made Lunceford uneasy, she said, because she’d seen videos online of police firing tear gas at protesters in other parts of the country. Police also fired tear gas at protesters in Ferguson on Sunday night after fireworks and projectiles were thrown at police.

“Honestly, the whole police state needs to be reformed,” she said.

Kyla Stanley of St. Louis came to the protest with her brother Kylin and their friends.

“The white cops need to give us a chance to talk instead of targeting us like we’re the enemy,” said Stanley, who is black. “It’s sad how white cops treat us. We’re all humans. We should be treated with the same respect we give them ... they deserve every riot and every protest right now.”

Tom McKenzie said he’s been involved in protests for 50 years, including those criticizing the Vietnam War.

“The problem is that the people in control are afraid of black people,” McKenzie said. “They want to keep their power and they will go to any length to keep it. They disregard (black people’s) humanity.”

Mayor Lyda Krewson said during a press briefing earlier Monday that the city will distribute masks to protesters, but it wasn’t clear how many the city has available to give away.

“We can’t stop thinking about COVID,” Krewson said. “We know that black and brown communities have been more devastated by COVID than white communities. We don’t want these protests to contribute more to that tragedy.”

Krewson said while large gatherings may allow for the transmission of the coronavirus, she respects the people’s right to peacefully protest.

“We are listening, we are speaking with clergy, we are speaking with leaders of the protest groups and we will continue to do that,” Krewson said. “We recognize there are cultural changes that need to be made, but we don’t condone any sort of violence or looting. We don’t want people to get hurt.”

“We are making our voices known as we stand in prayer,” Jonathan Tremaine Thomas, of Civil Righteousness, a faith-based activist group, said through a bullhorn. “Nonviolence and peace is still a weapon that cuts. ... It divides the anger from the truth.”

In O’Fallon, 17-year-old Jalen Thompson was one of the organizers of the march there.

“We were talking about going to a protest down in St. Louis, but we’d have to convince our parents to let us go, and we’d run the risk of things getting violent,” Thompson said. “Smaller cities need to do this. People feel it’s a hassle to speak up.”

“The conduct of the officer in Minneapolis cannot be condoned, whether by police officers or by anyone else,” Clothier said.

Besides St. Louis, demonstrations also were held Monday in several other U.S. cities, including Minneapolis, Philadelphia and New York.

“We have to take care of our communities and our people, and for that reason we will continue to strategically deploy Illinois State Police and the National Guard as we work to protect Illinoisans and the First Amendment rights of peaceful protesters,” Pritzker said in a statement. “We cannot allow those who have taken advantage of this moment to loot and smash to also steal the voices of those peacefully expressing a need for real, meaningful change.”

The president of the University of Missouri, Mun Choi, said in a news release that the university had investigated a video that circulated on social media showing high school students “laughing while they appear to be simulating the choking of one of them.” Choi said one student is heard saying “I can’t breathe,” which is what Floyd was heard saying in a video recording May 25 as a white officer pressed his knee into Floyd’s neck.

One of the high school students was poised to enter the university as a freshman but has rescinded her enrollment in the wake of a firestorm of criticism, Choi said Monday.

Photographers David Carson, Robert Cohen and Colter Peterson of the Post-Dispatch contributed to this report.

EDITOR'S NOTE: This story has been updated to correct the address of Campbell House Museum.

Pritzker on Trump's response to protests: 'He's been a miserable failure'

A car burns at the corner of Martin Luther King Boulevard and Tucker Boulevard on Tuesday, June 2, 2020. After a peaceful day of protests things devolved into full scale riot with looting, fires and 4 police officers shot. Photo by David Carson, dcarson@post-dispatch.com

Protesters in downtown St. Louis at the City Justice Center shout "No justice, no peace" during a rally on Monday, June 1, 2020. Protests across the country continued after the death of George Floyd who was killed in police custody in Minneapolis on May 25. Photo by Colter Peterson, cpeterson@post-dispatch.com 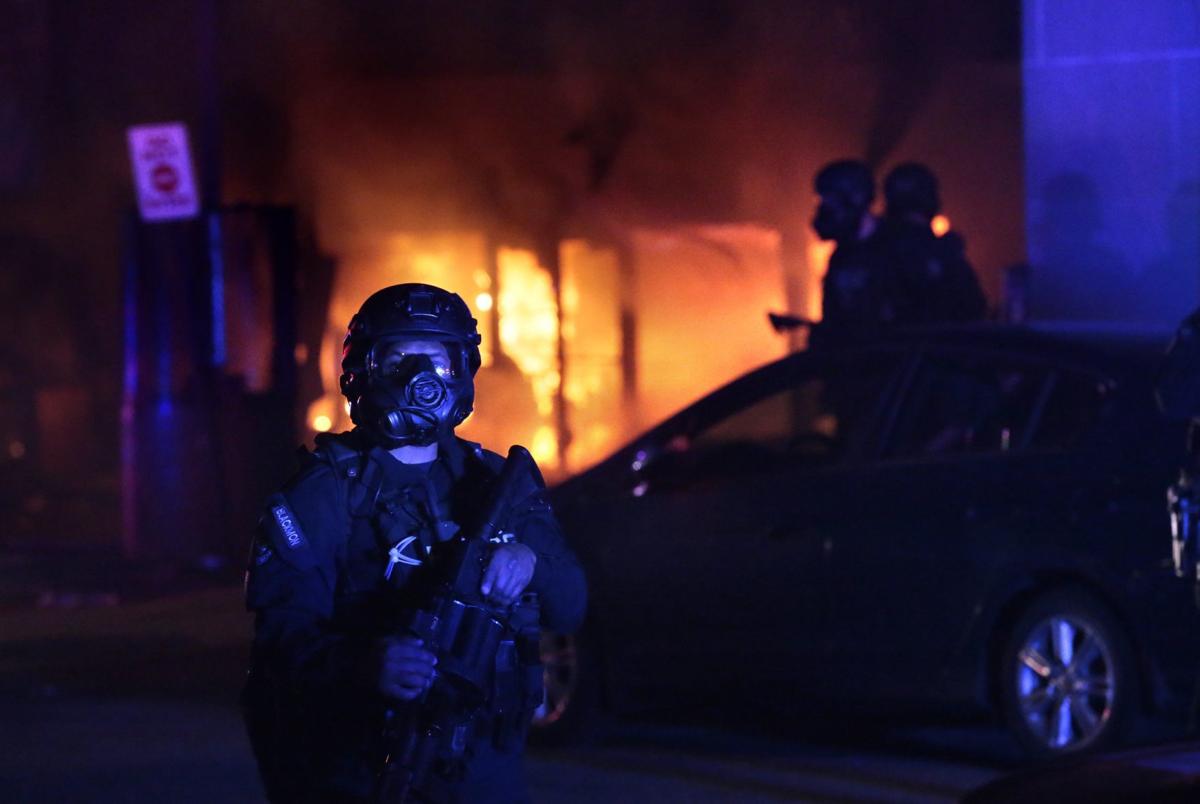 St. Louis firefighters are protected by police officers as they put out a fire at at looted 7-Eleven convenience store at 201 N. 17th on Monday, June 1, 2020. Photo by Robert Cohen, rcohen@post-dispatch.com