I was in the Boston area visiting family and attending a friend's wedding on Saturday. That Sunday, my fiancée Betsy Taylor and I celebrated our recent engagement with a party at my parents' house. Our plan on Tuesday, Sept. 11, 2001, was to visit Martha’s Vineyard.

Then our plans changed.

I was sleeping late. Betsy told me the news of a plane crashing into the World Trade Center. We watched on television as smoke billowed from the North Tower, then came the second attack.

At the time Betsy was a news reporter for The Associated Press in St. Louis. We called into our Missouri offices, and soon found ourselves driving toward Boston's Logan Airport after hearing reports that some of the crashed planes departed from there. We did some brief reporting at the airport and after some conversations with our bosses, we decided to try to get to New York City that night.

I was unprepared to cover the largest news event of my life. I had a film camera, a 24mm lens and a half dozen rolls of film. My cellphone battery was draining, and I hadn't packed a charger. But there we were, driving toward ground zero in our rented convertible.

Along the way, we stopped at The Providence Journal-Bulletin to pick up a digital camera and lenses friends there agreed to lend me. As the sun set, we stopped again at a highway overpass in Connecticut where people waved American flags toward passing cars. At the time that was unusual.

Approaching New York City, traffic was thin. We tucked in behind what appeared to be a FEMA convoy and followed it onto an exit ramp for Manhattan, barely squeezing by an unmanned barricade on the highway. A towering plume of smoke was rising in the distance. Times Square was deserted. We should've stopped to photograph that, but we were focused on getting to Betsy's sister's apartment, where we could stay.

The next morning, I documented history as I encountered it. The streets were mostly empty of cars; I recall it being quiet other than the sound of sirens in the distance. The closer I walked toward ground zero, the thicker the layer of dust from the fallen towers became; it covered my shoes as I walked. It didn't occur to me at the time how toxic that dust could've been.

As I got closer I began to see the burned out, smashed husks of cars that had been crushed by falling debris and hastily removed from the immediate scene. "Will is not dead. Just can't go home," was scrawled on a dusty window. On the hood of a car, someone had written "I love USA" along with a misspelling of the word vengeance. Paper from the collapsed offices littered the ground.

Firefighters and police officers from all over continued to funnel into the scene. Medical personnel in masks followed them. A perimeter guarded by police officers and later by soldiers surrounded ground zero. A few civilians gathered at the edge of the scene, some covered their mouths and noses with tissues. Others just breathed the smoke and dust-filled air.

There was some compelling photojournalism being produced during those historic days in New York City. None of it was being produced by me; I was frustrated, not just for myself, but because I wanted to show readers what had happened. An important part of news is bearing witness to it. I talked with photo editor Bryan Moss back in St. Louis, expressing my doubts about what I was producing. He gave me some great advice. "Make photos that you'll want to show your children and grandchildren when you get older," said Moss.

In the coming days, I followed Moss’ advice as best I could. I spent part of an afternoon photographing people as they hung up posters of their missing loved ones around the city. I tried to localize the story by focusing on members of Missouri Task Force One, an urban search and rescue team. I looked to make pictures showing how people were pulling together, helping in any way they could. I made pictures at public memorials and vigils that reflected people's grief and sorrow.

After five days of photographing, I was done both emotionally and physically, but aware of the fact that many others had been through so much more. Lost more than I could ever imagine. Another photographer from the Post-Dispatch was arriving. I felt relieved. But leaving also made me feel guilty.

Last Sunday I was thinking a lot about 9/11. I spent part of the week working on stories about the upcoming anniversary, watched a documentary and saw the coverage of the flags going up on Art Hill. I looked for the images I'd made on 9/11, buried somewhere in my personal files.

After a quick search of the basement I popped back upstairs, proud I’d located the DVD with the images. Betsy cautioned me, "You know those pictures probably didn't get any better with age. You were a young photographer."

Photos: Memories and images from New York City on 9/11

Firefighters from all over go to Ground Zero to help

Search for the missing after 9/11

Missouri Task Force One in New York after 9/11

Memorial in Union Square for 9/11 victims

Memorial in Union Square for 9/11 victims

Near Ground Zero days after the attacks

Events, updates and archives: Here’s how the Post-Dispatch covered the 20th anniversary of 9/11

David Carson is a photographer at the St. Louis Post-Dispatch.

Across the St. Louis region, people gather to remember 9/11

‘Over time, it becomes more and more like history instead of current events.’ 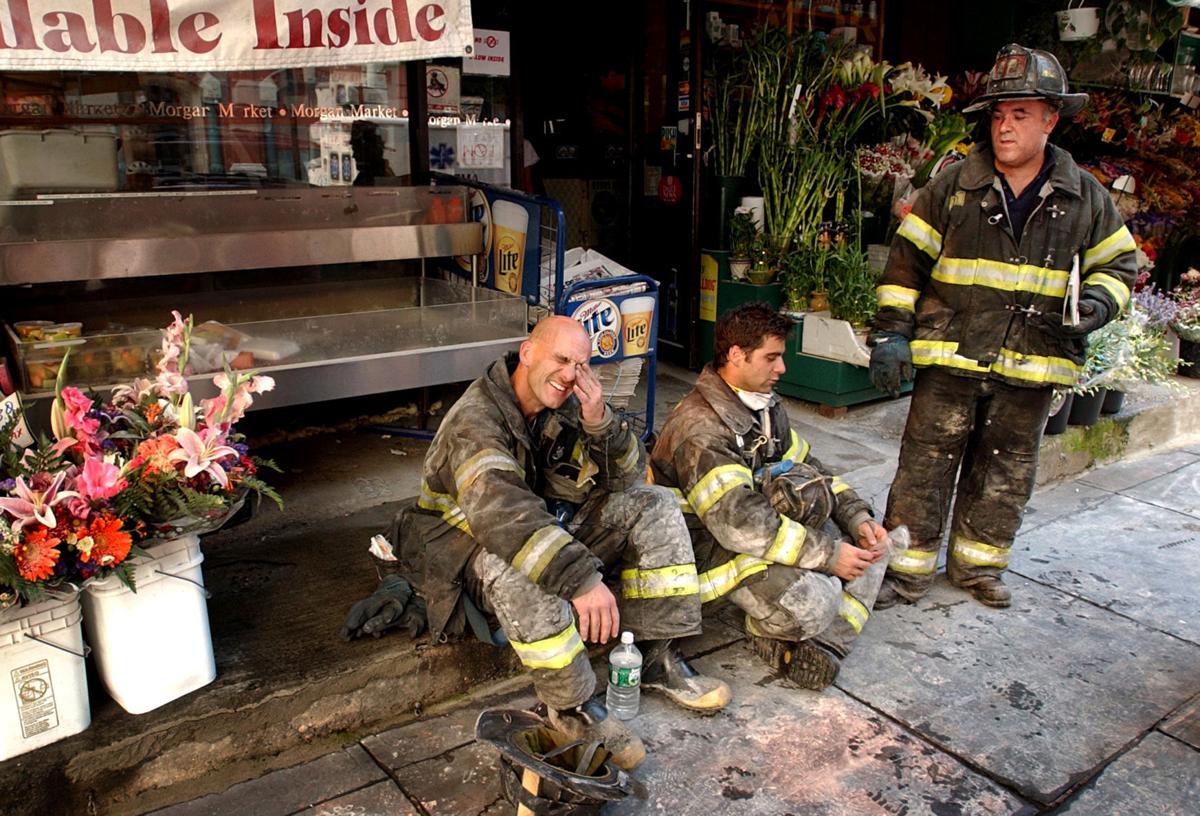 Firefighters take a break from the rescue and recovery operation on the steps of Morgan's Market on Reade Street about one and a half blocks from the collapsed World Trade Center Building on Wednesday, Sept.12, 2001. When asked for their names they declined with the firefighter on the left saying "The only guys' names that matter are the guys trapped in that building". After a short break, they walked back into Ground Zero to resume the search. Photo By David Carson, dcarson@post-dispatch.com 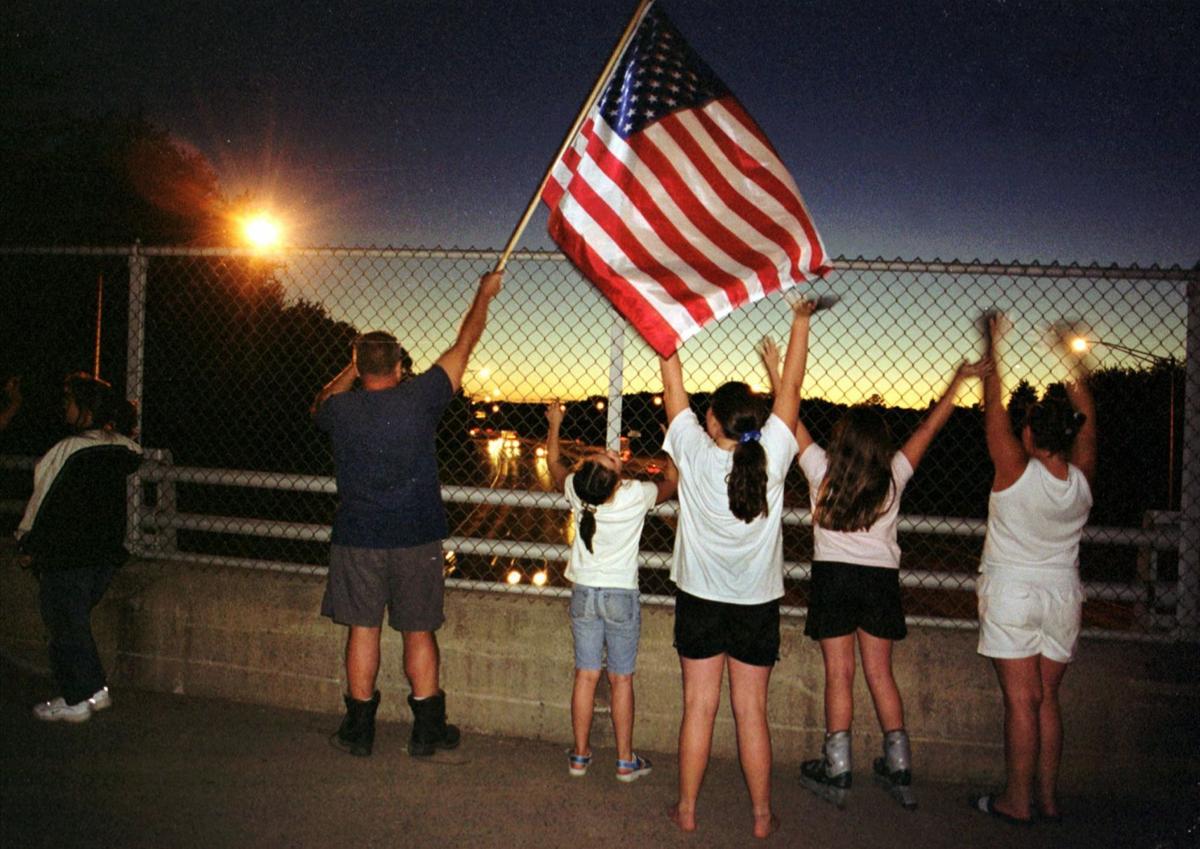 Joe Richardson, 35, of Milford, left, show his patriotism to northbound traffic on Interstate 95 on the West River Street overpass in Milford, Conn., Tuesday, Sept. 11, 2001, in the wake of the attacks in New York City and Washington. Photo by David Carson, dcarson@post-dispatch.com 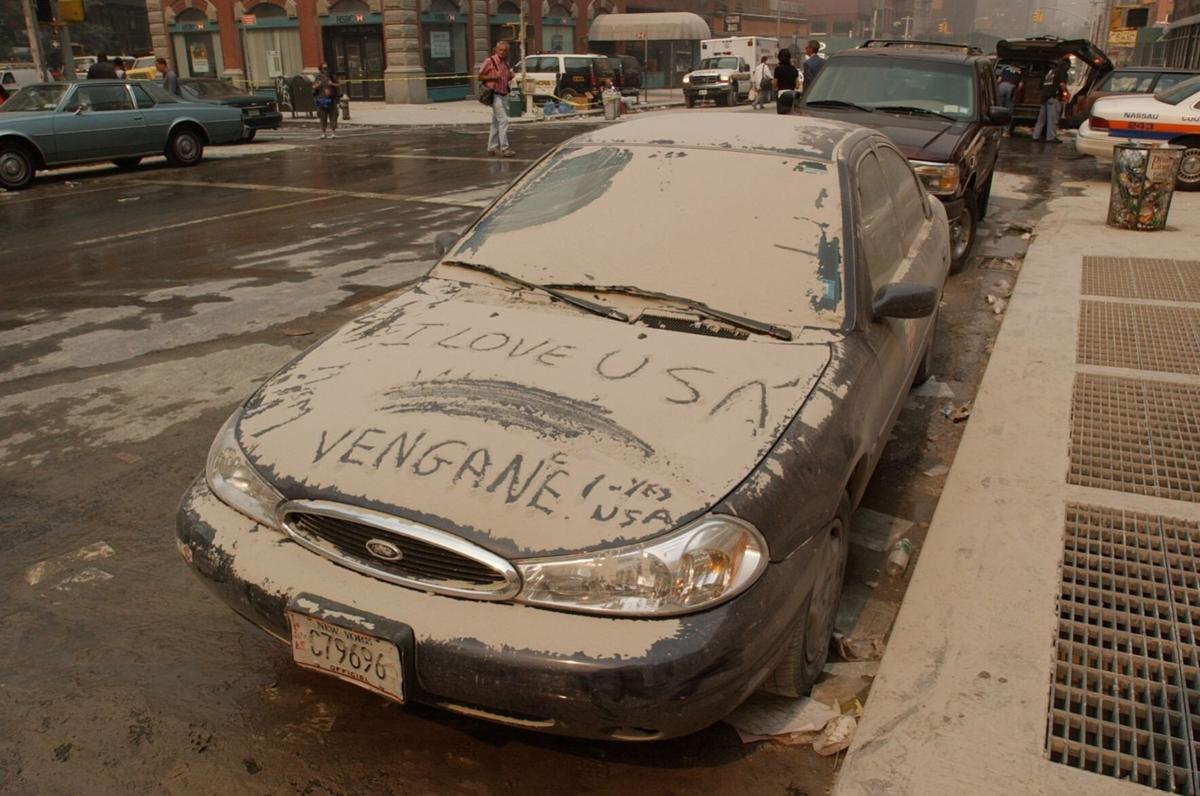 A car covered in concrete dust from the fallen World Trade Center buildings shows thoughts and feelings of a passerby near Ground Zero in New York on Wednesday, Sept.12, 2001. Photo By David Carson, dcarson@post-dispatch.com 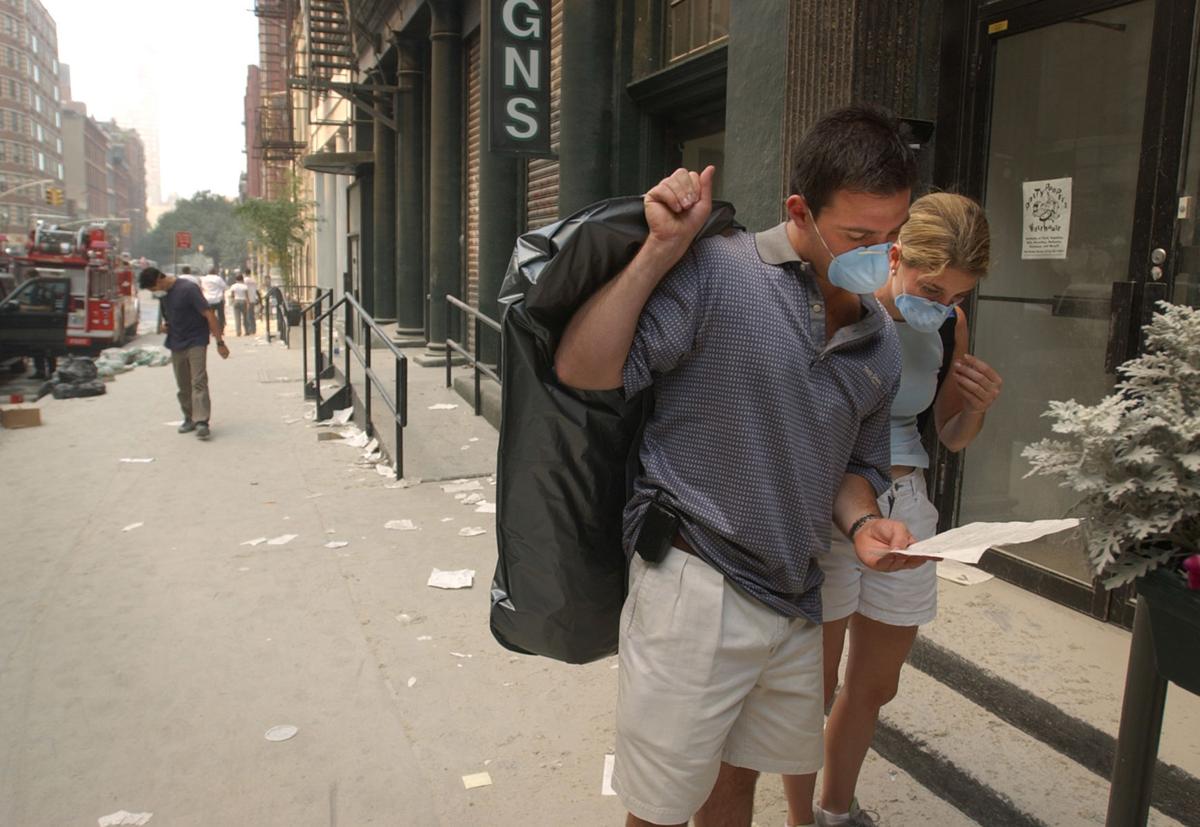 A couple stops to read a sheet of paper they found blowing around in the dust near Ground Zero on Thursday, Sept. 13, 2001. Paper from the offices in the collapsed World Trade Center building littered the area for blocks. Photo By David Carson, dcarson@post-dispatch.com