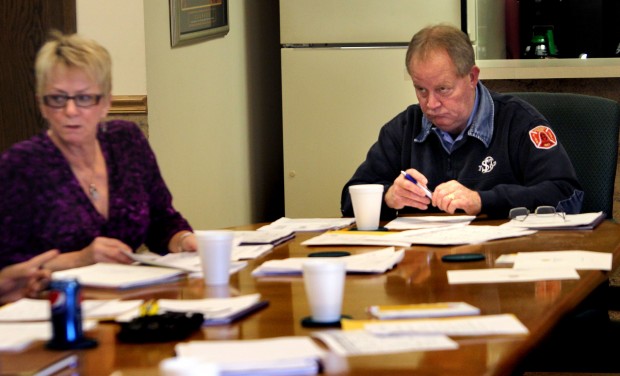 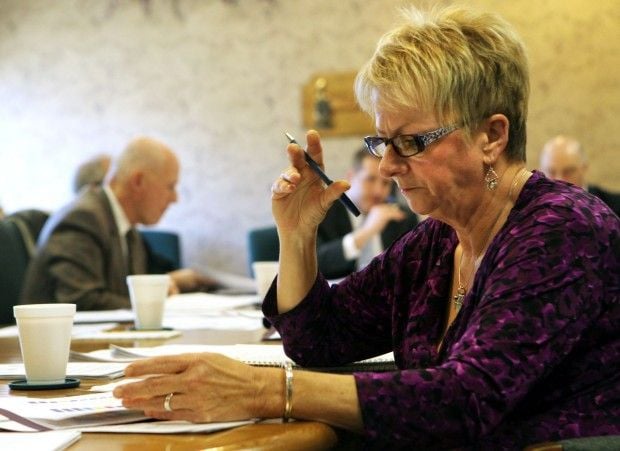 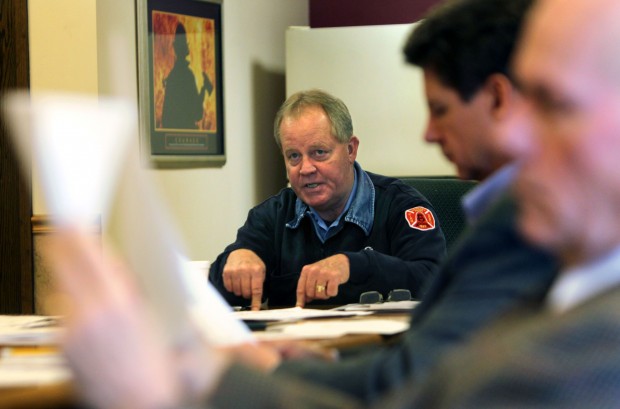 ST. LOUIS • The trustees of the St. Louis firefighters pension system have for two decades doled out to their office workers some of the richest benefits among public employees in the city.

The four employees run the day-to-day operations of the $450 million Firemen’s Retirement System.

They do not make investment decisions. Their job is to help firefighters enroll in the system, maximize benefits and navigate retirement.

In return, the workers get up to 61 days of annual vacation, sick leave and holidays — 12 weeks off, in total. They are eligible for bonuses up to $2,500 a year.

The system pays nearly all of their vision expenses, and cuts each an annual check to cover medical and dental premiums.

Employees who don’t call in sick for a year get two days of extra pay. They can call in sick twice and still get one extra day of pay. And they can, with approval, cut out of work after four hours without burning a vacation day.

Moreover, the employees get automatic annual cost-of-living salary increases, plus at least 3 percent more at each additional five-year anniversary.

But the crowning benefit is their retirement plans — they get three. Each.

The first entitles them to a regular city pension. The second pays them one month’s salary, plus interest, for every year they’re employed. And the third matches thousands of dollars of their own contributions, up to 6 percent of their salary each year.

One system worker, Marilyn Williams, is married to a trustee, Bruce Williams, and was hired while he sat on the board.

Another worker, Patricia DeLunas, retired in December 2009 making $88,000. She walked out with $211,000 in retirement cash, including at least 670 hours of unused vacation and sick leave.

Every one of the benefits was approved over the years by an eight-member board of trustees — five of whom are current or retired firefighters — charged by state law with running the system and overseeing the office workers.

The system has not compiled records totaling all bonuses and retirement payments made. But public records show trustees have banked at least $568,000 for their employees in just one of the retirement plans.

The system pays for such expenses, in addition to firefighter pensions, out of its accounts, which are filled by firefighter contributions and yearly interest earnings, as well as some tax money.

The tax dollars kick in when the system needs them. This fall, the city is expected to pay more than $20 million into the fire pension — leaving city officials seeking action, including curbs on the office employee benefits.

“I’ve seen their benefits package,” said city Personnel Director Rick Frank, who has no oversight over the firefighters’s system. “I was just shocked.”

Frank said that, over nine years at the helm of the city’s personnel department, he has gotten to know benefit packages in municipalities and governments across the United States. And he has never heard of benefits such as these, even for executives.

The board chairman, firefighter Len Wiesehan, said the benefits are commonplace at retirement systems, and the workers deserve them.

“I know it’s different, but we’re dealing with four employees, not 700,” Wiesehan said. “They’re running a $500 million corporation. If you don’t compensate them adequately, you won’t get good people and they won’t work as hard.

“They do an excellent job. Our reports from bookkeepers and actuaries praise them for how good of a job they do.”

Grass, the executive director, was hired as a payroll clerk in 1986 after working as an office manager for a florist and a bookkeeper for a clothing company. She had a high school diploma and went to a technical college for clerical work, but had no prior pension training, she said in a recent deposition.

By 1988, she was assistant to the director of the system.

Grass, 60, defended her work in an interview last week, saying, “Twenty-seven years of experience qualifies me for the job.”

She also defended the board.

“I think the board of trustees has made decisions through the years that are appropriate for everyone involved,” she said.

‘AN ABUSE OF DISCRETION’

Other city retirement plans do not list the same level of benefits.

The director of the city Police Retirement System gets a salary similar to Grass but doesn’t earn the same perks. His system, for example, provides just one retirement package, and employees pay health insurance premiums.

City workers — including firefighters — and those who administer the city Employees Retirement System get about two weeks of vacation a year when they start. It takes 20 years to earn five weeks.

City employees get 10 sick days and 10 holidays a year, and they pay medical and dental insurance premiums, Frank said.

• The board has paid the workers more than $40,000 in bonuses over the last 25 years, extra pay that is typically barred by state law. “State statute does not allow for retroactive pay,” Frank said. “That’s what a bonus is.”

• Because the city’s deferred compensation plan doesn’t allow for an employer match, the retirement system instead pays each employee as much as 6 percent extra straight into their monthly checks, inflating their annual salaries by thousands. City officials are now investigating how that pay could also be affecting retirement calculations, which are based on salary.

• The four employees were given retirement accounts credited retroactively with yearly payments of one-month’s salary, plus interest, beginning with their hire dates. The benefit was approved in 1997. For Grass, who was hired in 1986, the move put about $60,000 in her account in the first year.

• After the workers’ retirement accounts lost thousands of dollars in a 2001 tumble in the market, the board approved a rule requiring employees to shoulder only half of any future losses — the system would pick up the rest. After another market crash in 2008 (Grass still lost nearly $19,000 from one of her retirement funds), the board changed the policy again, allowing employees to pick investment options that guarantee they won’t lose a dime.

• Bruce Williams was on the board when his wife, Marilyn, was hired in 2000. He insists that many of the benefits were passed before his wife was an employee and that he doesn’t vote on issues affecting his wife’s pay.

City Hall has questioned the legality of some of the benefits.

Earlier this month, the city sent a letter to the retirement system contesting the annual share of tax money paid to the system. City Counselor Patricia Hageman wrote that the pension board had no authority to create a secondary retirement package for its staff. She also labeled “unlawful” the practice of year-end bonuses and backdating of retirement benefits.

“As a whole,” Hageman wrote, “the benefits provided to FRS are excessive and constitute an abuse of discretion.”

Moreover, she said, the benefits take money from the fund that should be paying for firefighter pensions.

Eddie Roth, the city’s director of operations who was recently appointed by the mayor to sit on the board, called the benefits “outrageous.”

“It inevitably hurts public employees who are relying on this,” he said. “We’ve let them down.”

But Wiesehan, the retirement system’s chair, said various legal precedents had given the board the authority to do what it had done, and others were currently being decided by the courts.

“There’s nothing about it that’s illegal,” Wiesehan said.

Besides, he said, the board recently agreed to sit down with the city and hear out officials’ complaints.

‘THERE ISN’T ANYTHING TO HIDE’

The Firemen’s Retirement System has been struggling for the past few years to recover from the recession.

The system has also been under extra scrutiny for more than a year, following a Post-Dispatch investigation revealing widespread misuse of fire disability retirements and dozens of additional benefits rubber-stamped over the years by city officials.

Early last year, Mayor Francis Slay introduced a plan to close the current system and start a less-expensive one. He sought to cut many of the add-on perks and curb a disability pension so rich, his staff felt, it encouraged firefighters to go out injured.

Moreover, under the new system, the board would be administered by city law — not state law — and its employees would be part of the city’s civil service system, governed by a lengthy set of rules.

After Slay’s plan passed through the Board of Aldermen, however, the pension board sued the city. The issue — and the future of the employees of the Firemen’s Retirement System — is now stuck in court. Hearings are scheduled for this week.

Grass blames the criticism from City Hall on Slay’s fight to dismantle the pension system.

And Bruce Williams, the pension trustee, said the city should have known about the perks.

“Most of these things were put into place more than 10 years ago. There isn’t anything to hide,” Williams said. “I don’t believe anything was done under the table.”

Roth said he didn’t know until he asked for the information this winter.

But the benefits, he said, “should have been a big deal all along.”

Editorial: Benefits are too rich for Firemen's Retirement System workers

When was too much enough?

Was it when the four employees who run the day-to-day operations of the $450 million Firemen's Retirement System got a whopping 12 weeks of paid vacation, sick leave and holidays?

The ruling, if it stands, means firefighters with less than 20 years of service will see reduced benefits

Vicky Grass, the former director of the system, receives $579,210, plus pension and other benefits.

The 22-2 vote came despite concerns raised by Budget Director Paul Payne and Comptroller Darlene Green that measure would unwind reforms enacted in 2012.

How the fire pension employee benefits were approved

The board overseeing the Firemen’s Retirement System has approved a series of employee benefits over the past two decades:

With occupation and the year they joined the board:

The Firemen's Retirement System sued the city on Wednesday, asking a judge to block fixes made to Mayor Francis Slay's firefighter pension ref…

St. Louis fire pension administrators cash in during the holidays